Frequency modulation in synthesis is a fairly simple concept that opens up a Pandora’s box of complexity. The idea of using one signal to control the pitch of an oscillator can take on a lot of different forms and flavours, from subtle vibrato to extreme audio-rate mangling. As most eurorack users will already know, if you modulate the frequency of an oscillator with a low frequency oscillator, or LFO, small amounts of modulation will produce the aforementioned vibrato while larger amounts will make the oscillator zip up and down in pitch like a police siren.

If you increase the rate of the LFO into audible territory, sideband frequencies and new harmonics will start to appear, and the waveform will become much more rich and complex. This technique has long been central in the west coast approach to synthesis in producing wild new timbres, but John Chowning discovered that with particular ratios between two or more oscillators, timbres that realistically emulated metallic instruments could be produced. This technique was eventually employed by Yamaha with their DX7 synthesizer, and for better or worse, it ushered in a new digital revolution.

Which brings us to the Humble Audio Quad Operator. Here we have a module that seems to be gazing at the past and the future at the same time. Operator is an FM synthesis term that indicates the number of oscillators, and their arrangement as carriers and modulators. As the name suggests, the Quad Operator is made up of four oscillators. However, the relationship between them created by a comprehensive but simple and accessible modulation matrix is what makes things interesting. As you can see on the faceplate, the module is largely made up of a grid of small knobs. These control the amount sent from each oscillator to modulate the frequency of any other oscillator, including itself. I found this provided a quick and compelling method of dialing in a wide range of tones. 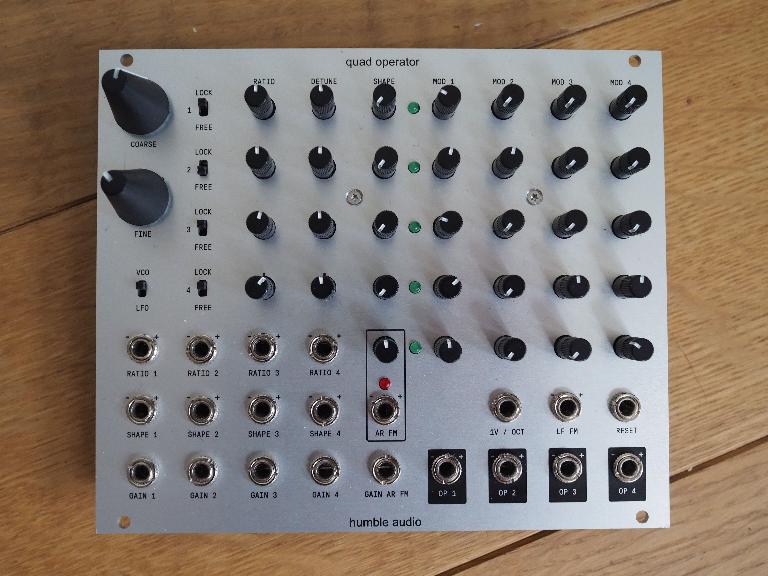 FM synthesis has enjoyed a bit of a resurgence in popularity recently with the Elektron Digitone, Korg Volca FM, Yamaha Reface DX, and before all of these was Native Instruments FM8. While these synths all sound great, and are able to dial in precise FM tones, they lack the hands-on immediacy that the Quad Operator provides. Being able to access and adjust the feedback between each carrier and modulator all at once makes for some very compelling knob twiddling indeed. Plus there’s another input for audio rate frequency modulation that can be sent to each oscillator via the bottom row of knobs.

Each oscillator has the option of being locked or free. A locked state will latch the frequency of the oscillator to the main pitch, and track any 1v/Oct input. While locked, the RATIO knob will cause the pitch of that oscillator to jump in integer values, as in a doubling or halving of the frequency. These strict relationships produce more consonant FM tones, but they can be detuned to add dissonance. If an oscillator is set to free, it is no longer latched to the main pitch control and the operator’s RATIO knob makes it sweep continuously up or down. This also allows the RATIO CV inputs to be used as independent 1v/Oct inputs, meaning you can use all four oscillators separately for polyphonic patches. Furthermore, each oscillator has an independent output and gain control, enabling it to provide a convenient sound source for a four-voice synthesizer. 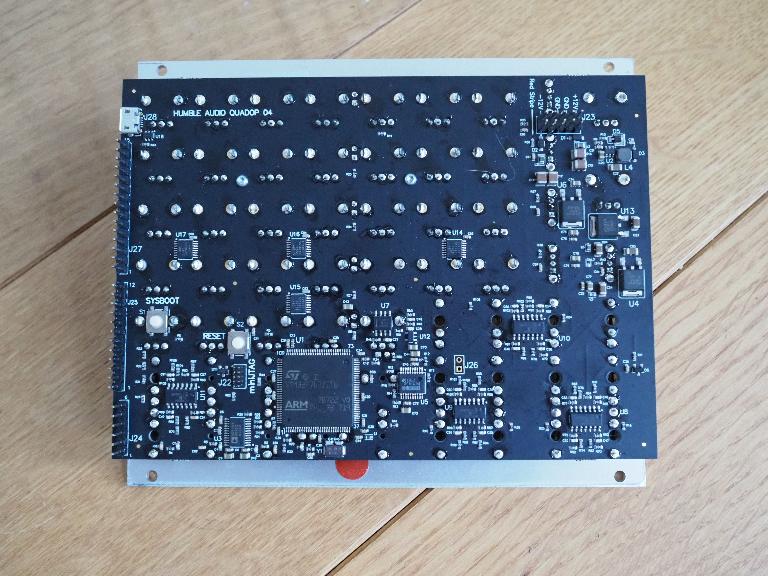 As a group, the four oscillators can be toggled between VCO and LFO ranges with the flick of a switch. A RESET input provides a convenient means to synchronize the timing of the oscillators with a clock source. This makes it easy to create complex but synchronized modulation by dialing in cross modulation between the oscillators and taking advantage of their individual outputs.

While many people may argue that a four operator FM synth is not capable of achieving the same richness as one with six or more operators, it’s worth mentioning that the Quad Operator has a bit of a shortcut to richness because it has a variety of waveforms that can be assigned to each oscillator. By using the SHAPE knob, it’s possible to sweep continuously from sine to triangle, and then from square to saw. Many of the early six operator synths like the Yamaha DX-7 only used sine waves for the operators. 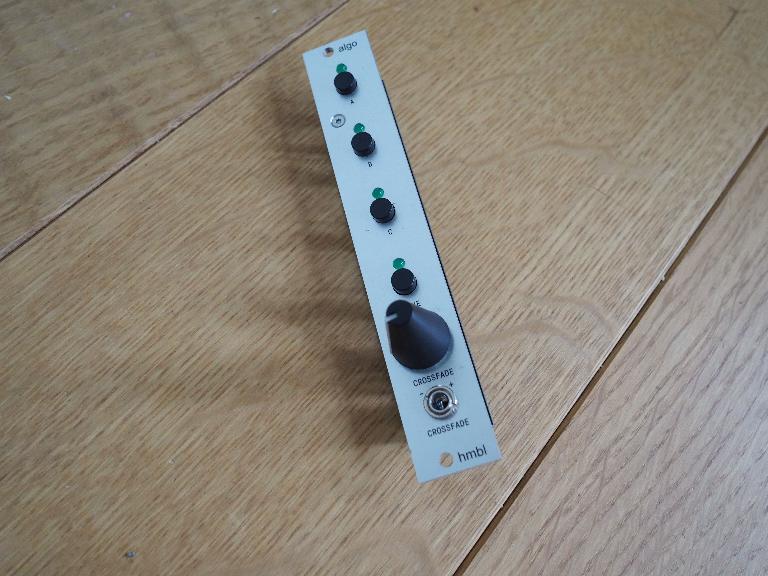 The Quad Operator has an optional Algo Expander module and they connect using a ribbon cable on the backs of the modules. The expander opens up the ability to save up to three algorithms, in this case meaning configurations of the modulation matrix. These algorithms can then be quickly assigned to either side of the CROSSFADE knob. This means that once you find a couple sweet spots on the panel you can save them and sweep between their settings. Or you can assign LIVE to one side of the crossfader, and sweep between a saved algorithm and the current panel settings.

The position of the crossfader can also be controlled via CV. The expander opens up a level of recall that makes the module even more suitable for live performance. While I really enjoyed the simplicity of the expander, it would be nice to have something a little more comprehensive, such as the ability to import larger banks of presets based on classic or contemporary FM patches. However, I can see how this might risk ruining the knob-per-function spirit of the module and require way too much real estate.

Since I mentioned the risk of making a module too complex, it’s worth mentioning that Will from Humble Audio recently put out a company manifesto on his blog. In it, he writes “Simplicity is a feature too, don't forget it”. I think that sentiment is really strongly reflected in the design of the Quad Operator. The panel is very clearly laid out, approachable, intuitive, and logically spaced to avoid making things crowded. At 30HP, it’s certainly a large module as a result, despite conserving space using small knobs and switches for many of the controls, but I feel the size is justified when you consider what it offers, and it ensures a much more enjoyable user experience. Sure, you could get four 2HP VCOs and only take up 8HP, but you would also need a lot of utilities like multiples, mixers, and a quantizer to reproduce what the Quad Operator already has elegantly set up, and things would undoubtedly be a lot more cluttered and confusing.

Whether you’re starting a new system or wanting to add a comprehensive FM voice to an existing rack, the Humble Audio Quad Operator is definitely worth considering. The hands on accessibility of the controls make it really fun and engaging to use, and it has such a wide tonal palette that you’re bound to keep finding pleasant surprises. Oh, and I almost forgot to mention the funky conical knobs! 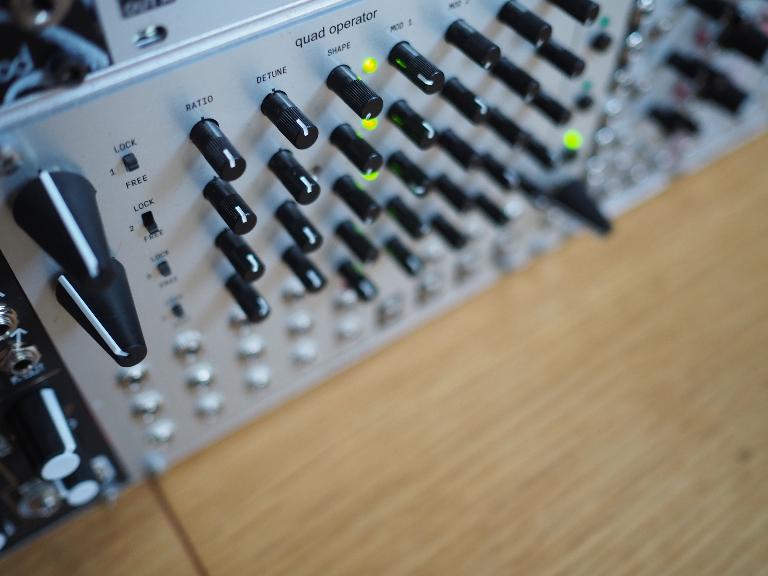 I was particularly pleased with the Krell patch I made with the Quad Operator.

Pros: Four Operator FM Synthesizer with individual outputs for each oscillator; Hands on, intuitive modulation matrix for quickly creating and editing FM algorithms; Oscillators can be locked to ratio relationships or set free; RESET input allows for synched modulation in LFO mode; Multiple waveshapes; Optional expander module allows you to save algorithms and crossfade between them.

Cons: Large 30HP footprint; Expander can only save 3 algorithms; Algorithms cannot be imported or exported.