Heavyocity shook up the cinematic scoring world with the Damage percussive instrument and now they’re back with version 2. Hollin Jones gets scoring with it…

You can’t watch many Hollywood blockbusters these days without noticing the pulsating, rhythmic scores that often underpin the onscreen action. And where once these had to be recorded with large groups of musicians at huge expense, software developers have for some time been creating sample-based cinematic instruments to enable composers and sound designers to achieve the same ends with far less fuss. Heavyocity has been at the forefront of this, and Damage 2 is a major update to its almost decade-old rhythmic scoring instrument. Recorded at the legendary Skywalker Sound studios, it aims to fulfil all your cinematic percussion needs.

Weighing in at almost 25GB using NI’s lossless compression (60GB uncompressed), it runs in Kontakt 6.2.2 or later including the free Player edition, and is downloaded and authorised using a combination of Heavyocity’s Portal and NI’s Access app. Kontakt of course runs as a plug-in or standalone app. There are three NKIs - essentially three major sections - Ensemble, Kit and Loop designers. Let’s look at each one in turn.

The Ensemble Designer has over 700 sound sources and in addition to the excellent presets you can customise any patch by going to the Source section, choosing a category of sounds then a bank or drum selection, and then dragging and dropping that sample onto the keyboard display to the right of the section. This is made even more flexible thanks to the multiple key ranges available using the 1-3 key banks along the base of the section, with key presses shown in each of the onboard keyboard displays meaning you can easily keep track of which sample is mapped to which key. Kontakt’s familiar colour coding also makes things pretty easy to follow. 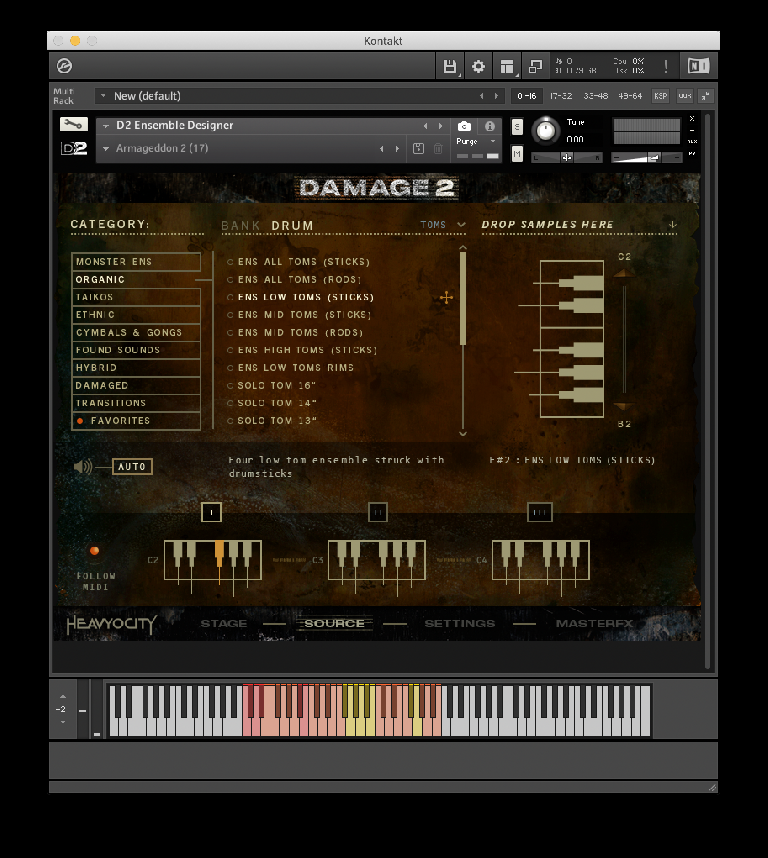 Whether you use a preset or customise your own ensemble, the Stage section has an incredible array of options for placing your sounds in the virtual soundstage. Each key has its own virtual point and these are lit up by pressing the key - again these are split over the three key ranges to keep things manageable. Moving any point (i.e. sound) around the stage will alter its ambience, meaning it’s super flexible in how it lets you apply different levels of reverb and space to each individual hit in the ensemble. Added to this are 5 mic positions - close, room, hall, LFE and analog crush - each with a separate on / off and level control. 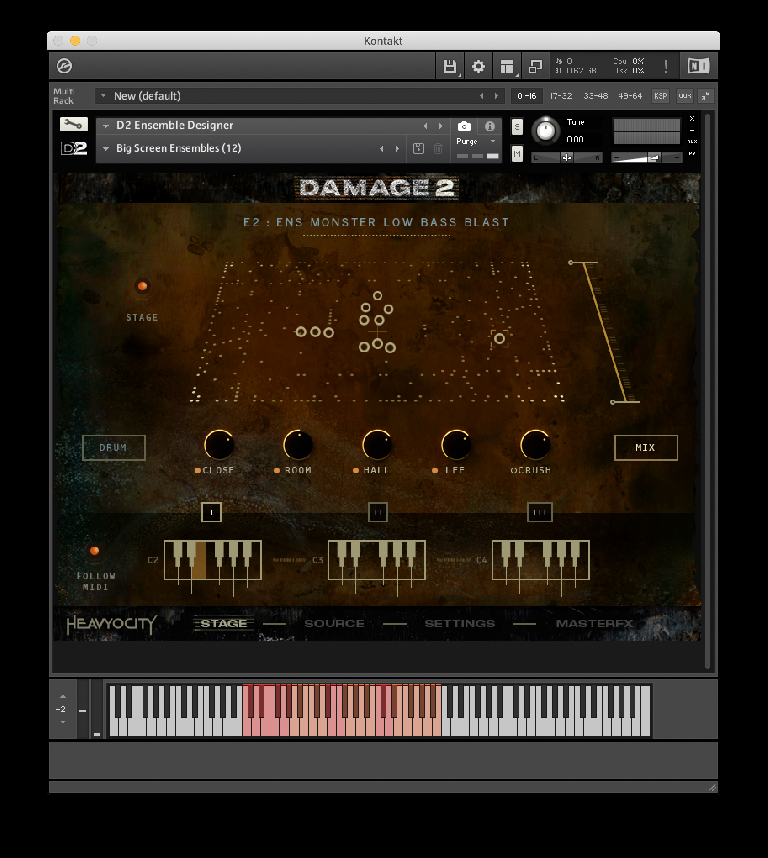 In the Settings section you can determine the precise behaviour of each sound and of particular interest here is the MIDI Performance tool which you can use to assign trigger modes to each individual sound including crescendo, swell, flam, roll and repeat, all with fine-grained settings. Last but certainly not least is a Master FX section, also available in the other two NKIs, with a comprehensive set of tweakable effects including the infamous and now-redesigned Punish knob with three modes, each increasing in severity. 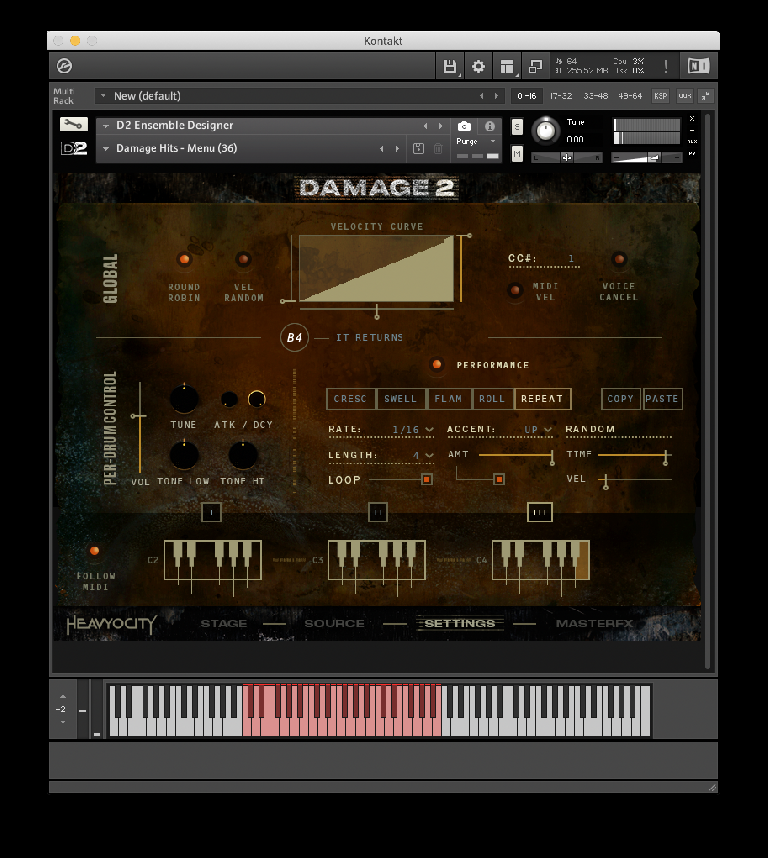 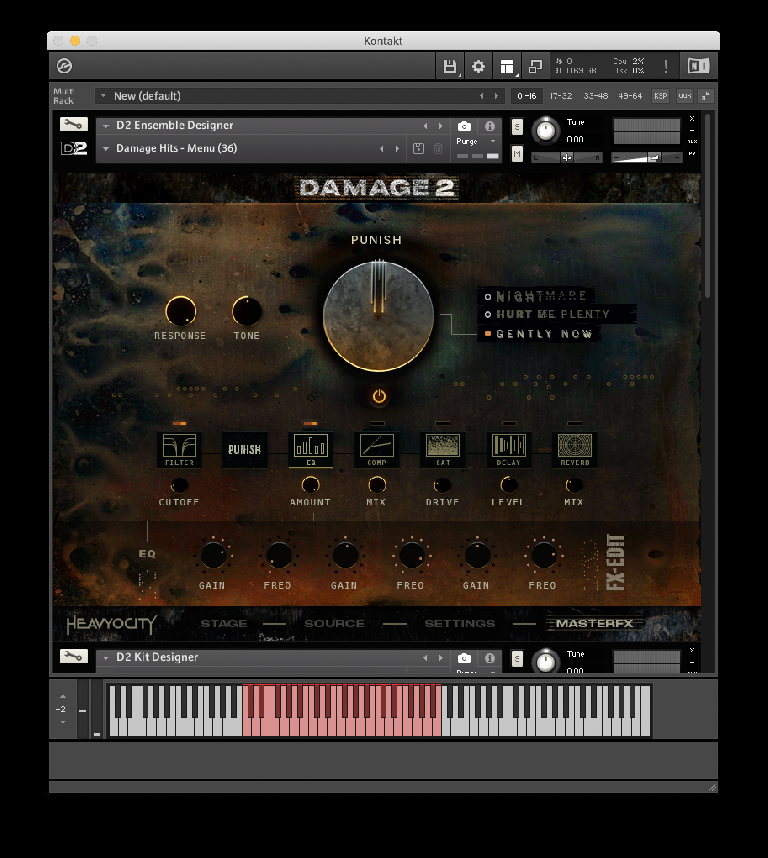 The Kit Designer is a different kind of beast, a 16-voice drum instrument for sculpting individual kits. Again there’s a browser so you can load sounds onto individual keys, as well as a bunch of cool presets of course, and independent effects chains for each voice so you can tailor the sound of the kit. The system of using 16 onscreen pad slots to represent the kit works well and there’s a friendly mixer as well as the ability to route channels out of Kontakt individuals for more flexible mixing in your DAW. 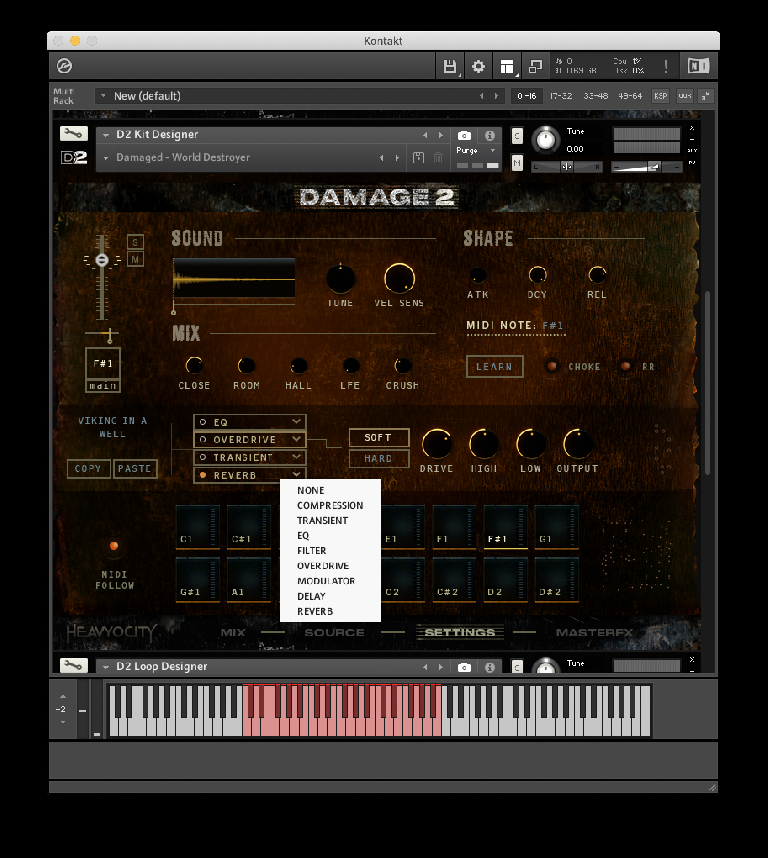 Next up is the Loop Designer, with a total of 864 loops, made up of 216 loops with 4 stems each. These are split into 432 with straight timing and 432 with triplet timing and in this mode you get a larger number of key zones per patch, again colour coded, with stutter modifier keys placed at the lower end of the keyboard and then various looped textures, hits, sequences and rises mapped across most of the rest of the keys. triggering any loop calls up its waveform and you can make various volume, pan and speed settings per-sound as well as easily changing the loop start and end points using the handles in the waveform window. The fact that the loops are grouped together into patches and mapped means it’s pretty simple to create evolving and dynamic sequences by just playing keys in realtime. The Designer Keys part of the keyboard is able to trigger multiple other keys at once, so you can activate several loops from a single key as part of a performance. 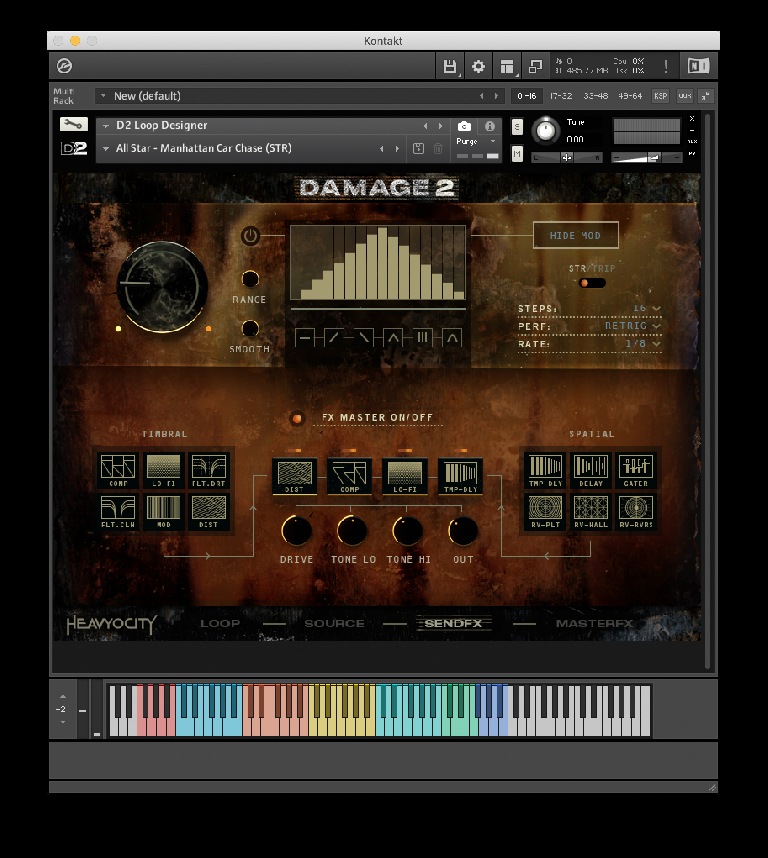 The Loop Designer shares the same Source and Master FX features as the other two NKIs but has an extra Send FX section where a selection of timbral and spatial effects can be added and you get the option to use a modulation tool to add animation to the effects for even greater creativity. Plus of course thanks to the design of Kontakt you can have several NKIs open at once and MIDI routed accordingly to trigger them all, or several instances open inside your DAW to achieve multi-layered performances.

Damage 2 is a beast of a percussive instrument and truly pushes the boundaries of what can be done with Kontakt. To call it an action movie soundtrack in a box is slightly clichéd but it really kind of is - a few hours playing around with it will have you picturing exactly the kinds of scenes these drums work with. There’s a wide variety of percussive and atmospheric sounds from traditional wood blocks through to thundering toms and cymbals and the effects on offer, not least the fabled Damage control, mean you can shape and sculpt everything to your liking.

Damage 2 provides such a depth of customisability that it can initially seem a little daunting but the learning curve is actually not particularly steep. And some users won’t stray far beyond the presets, because you don’t have to if you don’t want to. For others, the ability to customise kits, ensembles and sounds runs very deep. The MIDI performance tools are excellent and the whole thing is off-the-charts cinematic. It’s also more immediately playable than you might expect for an instrument with this many features. Anyone working with scores will find much to like here.

Pros: Superb cinematic percussion sounds. Endlessly dynamic and atmospheric. Movie beats in a box. Fun to play from the get-go. Excellent depth of sound shaping and FX tools. Probably the only scoring percussion tool you need.

Cons: Not much really - this instrument’s focus and character is clear and if you buy it, you know what you are getting.