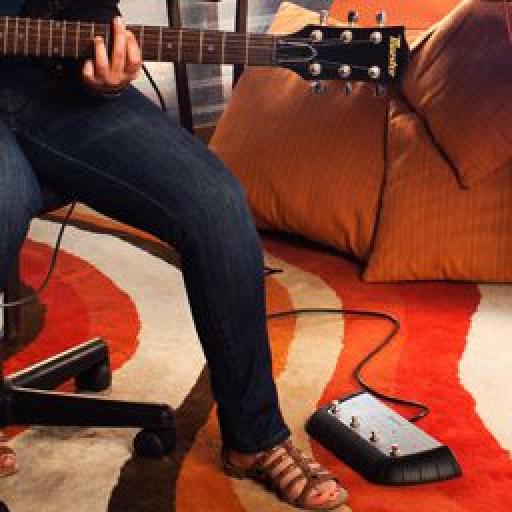 Language
Using your feet to control an iPad? Of course you can... when you connect up a Griffin StompBox. Mike Watkinson tested this unit out fully, and pulls no punches in this feature review.

Ever since Jimi Hendrix introduced us to the wah-wah pedal, guitarists have been using their feet as well as their hands (and sometimes their ears!) to perform. The iPad is of course very much a finger-driven device, so it's great to finally get a chance to try the Griffin StompBox, and get my feet in on the action.

The die-cast construction feels solid enough - that's important if you want to throw this thing in a bag with your other guitar bits and use it in a live situation! The StompBox connects to the iPad via the dock connector, while the guitar signal has to travel via the special 'GuitarConnect' cable (supplied with the StompBox).

At one end this plugs into the headphone socket of the iPad, with the other end plugging into the guitar and offering a headphone output - a nice touch that the headphone outlet is at the guitar end (where the players' ears are also found) - but a cleverer solution would surely allow the guitarist to plug into the foot pedal with audio entering the iPad via the dock connector (as with Apogee's Jam), so the chances of forgetting the crucial cable (or said cable breaking down on a gig) would be removed!

A nice option, however, is that you can also connect an expression pedal to the back of the unit to add foot-driven wah-wah and volume effects if required. Another tiny niggle for me is the lack of a locking dock connector plug. Early Apple charging units, and Apogee's Jam, have a locking dock connector that clicks home when attached and doesn't work loose. The StompBox does not - and this did prove to be an issue as, when not fully home, apps lost contact with the pedal. To use this successfully live you would have to ensure that your cables were not able to work loose!

This article does not pretend to be a review of the accompanying app, but it has to be mentioned that Frontier Design Group's iShred Live is the app that is recommended on the box and in the manual. The app is free, so no StompBox is actually required to use it, but you will need some sort of guitar-to-iPad interface or cable (like the GuitarConnect), of course. In brief then, initial impressions of iShred Live are promising, but it is one of those apps where you get only minimal functionality in the free version, and have to purchase your way to anything usable. 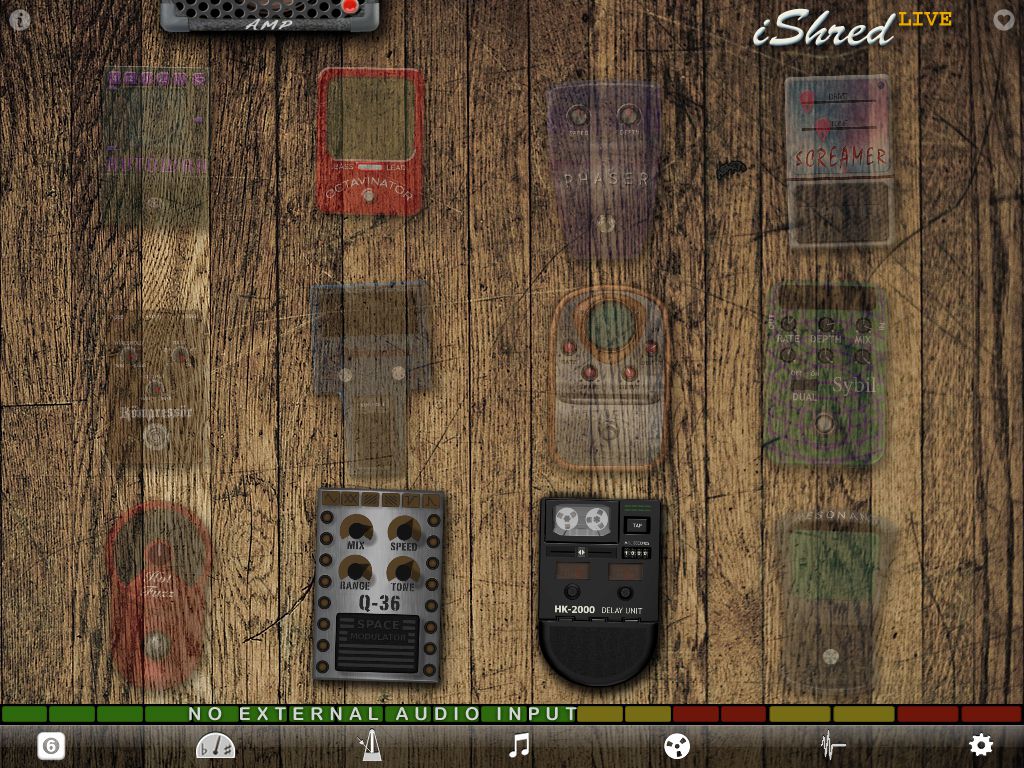 iShred Live before you buy anything.

Only two of the twelve effects are usable in the free version, with the extras costing anything from $0.99 to $1.99 per module. This does seem a little mean given the cost of the pedal itself. Luckily I had Positive Grid's JamUp Pro to hand (see MPVHub review here). As far as I can tell, this is the only other guitar amp simulator app that works with the StompBox. Not surprisingly, IK Multimedia's iRig and related apps such as Slash will only work with IK's iRig Stomp pedal, and GarageBand's Guitar Amp works with neither! JamUp Pro actually costs approximately the same as a fully loaded iShred Live - and I already know it sounds great! Seems you don't get anything for nothing these days... 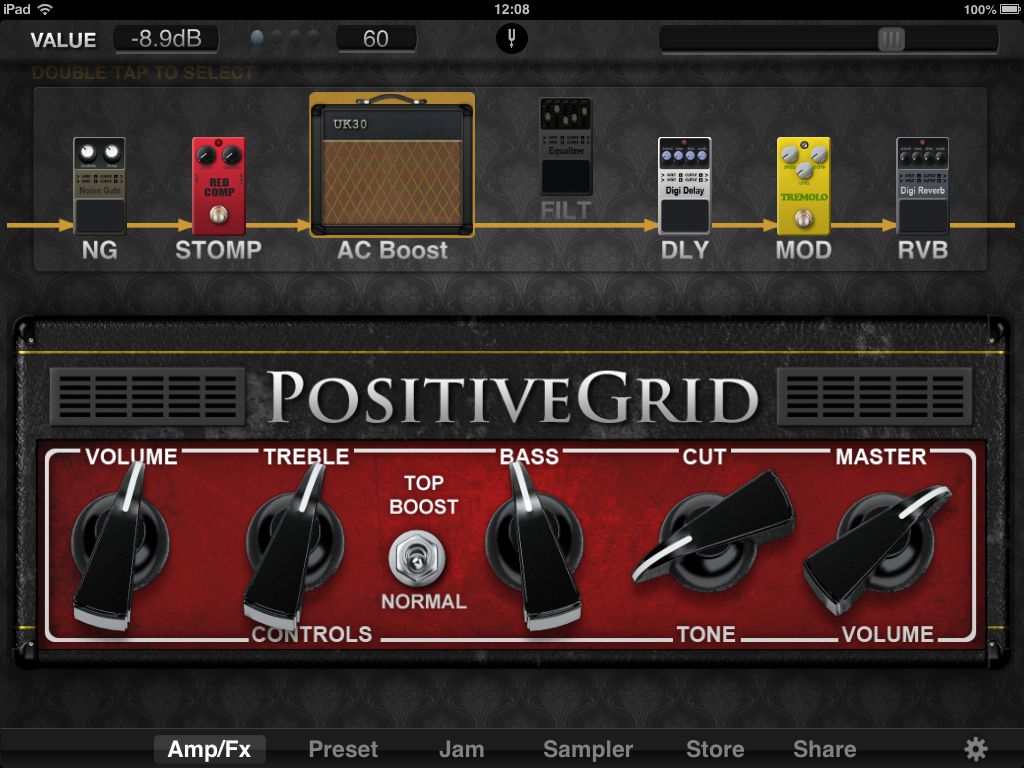 So does the StompBox work as a foot pedal - in short, yes! JamUp lets you assign a variety of actions to each switch, the most obvious of which is to simply turn an effect unit on and off. You could also use it to toggle a whole preset collection of amps and effects, or control the Jam Player or Sampler units within JamUp.

With this extra functionality the pedal adds a whole new dimension to using an iPad in a live setting. The LEDs on the unit are bright and clearly indicate when a module is active. They serve a further function not supported in JamUp, but which is implemented in iShred Live, and that is the use of the LEDs with the tuning function. When the Tuning module is active the left LED lights up if you are flat, the right LED if you are sharp; both central LEDs remain alight when you are exactly in tune - a simple but effective system. JamUp has an excellent tuner, but unfortunately the LEDs are not active when this is in use - a shame as this is a great feature of the pedal. 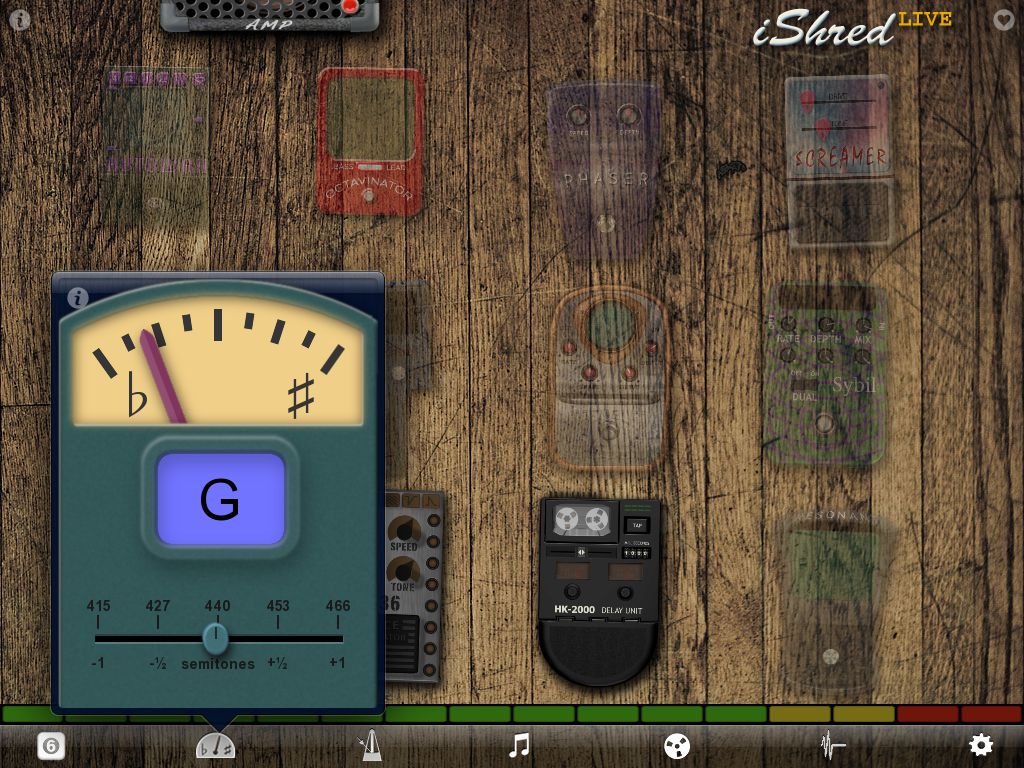 iShred's Tuner - not a great graphic, but the LEDs on the StompBox help a lot.

So in summary, it's a great idea let down by a few niggling details at present - I'm not sure I would fully trust the pedal and its cables in a full-on live situation, but for more controlled situations (practice, rehearsal, etc.) it certainly frees up the digits for playing the guitar. The 'free' app 'supplied' with the pedal turns out not to be quite so free if you want some of the more usable features, and the range of compatible third-party apps is limited to say the least!