You can never have too many sounds when it comes to creating great scores and soundtracks, but will Dronar Cinematic Atmospheres fit the bill for Matt Vanacoro?

I have to admit, I didn’t know what to expect at first when I learned I’d be reviewing Dronar from Gothic Instruments' Dronar Cinematic Atmospheres. Reading through the marketing materials and seeing the phrase ‘hybrid module’ to describe the instrument didn’t tell me much, but when I saw the amount of chatter online about Gothic Instruments’ latest offering, I was quite intrigued. 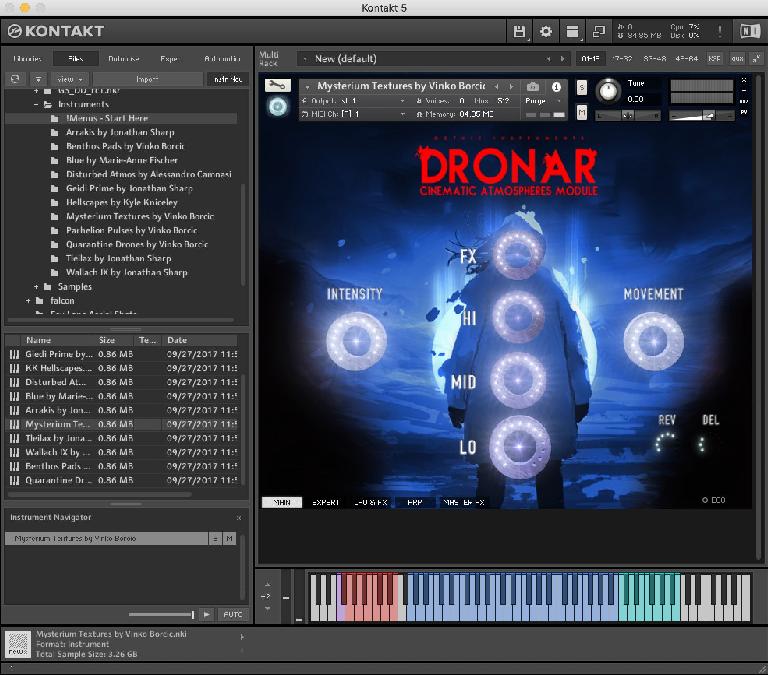 Dronar creates atmospheres in a very intuitive way. Instead of simply designing a wide sound with motion, there is some rather clever scripting involved and Dronar will spread out and re-voice the simple 1-4 note chord (I found out that the fewer notes, the better - I stuck with single notes and intervals mostly) that you play in a very ‘spread out’ way. The manual uses the term ‘filling out’ when talking about this, and I couldn’t think of a better way to explain it.

It’s the ‘sum of its parts’ that makes Dronar such a huge instrument. The newly spread out notes are animated with arpeggiators, LFOs, effects, and envelopes in a way that makes a simple triad seem like a fully composed cue. You really have to try it to believe it.

There are 300 presets to work with, but Dronar is really built to tweak. In fact, the instrument is specifically designed to be operated with one hand so that your other hand is free to adjust and tweak the controls. There are macros on the front page to control movement, intensity, FX, and EQ - but you don’t have to live with these shortcuts. There are fully fleshed out LFO/FX, Arp and Expert pages where you can dial up the motion or ratchet it back. 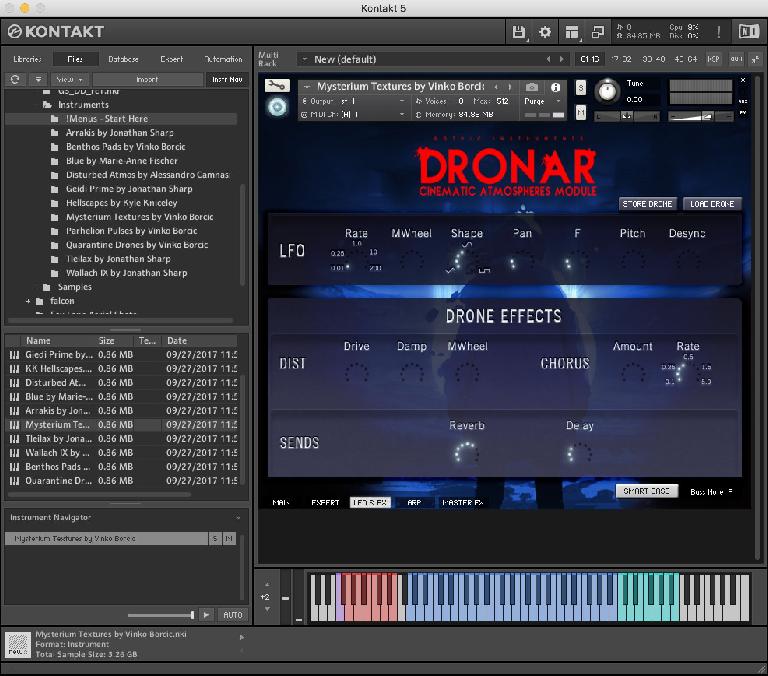 The sounds in Gothic Instruments Dronar Cinematic Atmospheres trend towards complex and evolving pads or atmospheres. The sounds range from etherial to downright horrifying, and are perfect for film, game, or media composition. Everything isn’t synthesized here, there are plenty of patches with source material directly from sampled orchestras mixed in with the synthetic evolving pad sounds. I would swear there are some animal sounds mixed in there as well. If not, then it’s just compelling as heck sound design. The category names could be a bit more descriptive - many of them are broken up by sound designer which isn’t as pertinent when you’re looking for a specific sound and you don’t know that designer’s ‘style’. There are 16 gigabytes of sample data here squished into only an 8GB footprint, which is very nice.

You’ll need the full version of Kontakt in order to make Dronar work, and this is because it is an ‘unwrapped’ library. You have to navigate to it via the ‘file’ menu in Kontakt as opposed to it showing up in your list of installed libraries.

If you need to design quick atmospheric cues, you really can’t go wrong with Dronar: it’s attractively priced. Some of the patches sound a bit similar to each other, but there’s enough tweakability there to allow you to differentiate them a bit. The sounds definitely rumbled the hell out of my speakers, and that’s a good thing.

Cons: Some sounds can be a little ‘close’ to others, I’m not a huge fan of navigating through the file browser and ‘unwrapped’ Kontakt instruments.

Learn more about composition and scoring in the AskAudio Academy here.