Language
Imagine an audio effects plug-in which uses the modular synth paradigm as its base... Glichmachines are one step ahead with Quadrant. Toby Pitman checks out whether it's as cool to use as it sounds.

Glitchmachines make some interesting stuff, the kind of stuff you'd probably want to make in Reaktor that makes strange noises. Luckily Glitchmachines turn these kind of weird ideas into plugins for you.

Their plugin Quadrant is another very cool idea that takes the modular synth paradigm and applies it to effects. At the same time it can be used as a more experimental modular synth as it contains a set of sound generators as well.

Also included is a library of over 1500 hardware modular synth samples and loops. It's all starting to sound rather good!

Quadrant comes with five basic effect types: delay, filter, pitch, distortions and bit reduction. All these effects can be routed however you see fit by patching virtual cables between modules. All effects can also modulated in various ways using things like LFOs and Envelope followers. Just patch them up. There are also mixers, mod sources and a set of Math modules on hand too. 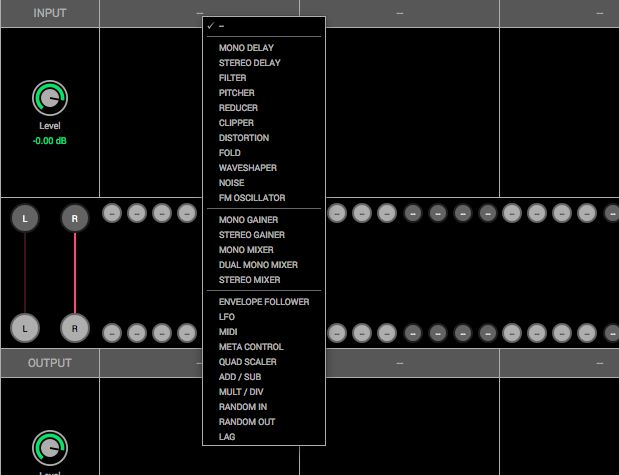 You can build simple effects like Chorus, Flanging, Filtered Delays, etc. or go completely nuts and create random glitched out distortion mayhem. The choice is yours!

When loaded as an insert plugin, Quadrant acts like any other effects processor. The cool thing is there's really no set path. Quadrant relies heavily on you just experimenting and this is the best way to go with it. The provided preset library is fairly wacky and you won't find many 'normal' sounds in there! :)

After a short while you get the hang of it and before long you'll probably have made something cool. This morphing filtered delay patch took a couple of minutes and pretty much has a mind of its own! :) 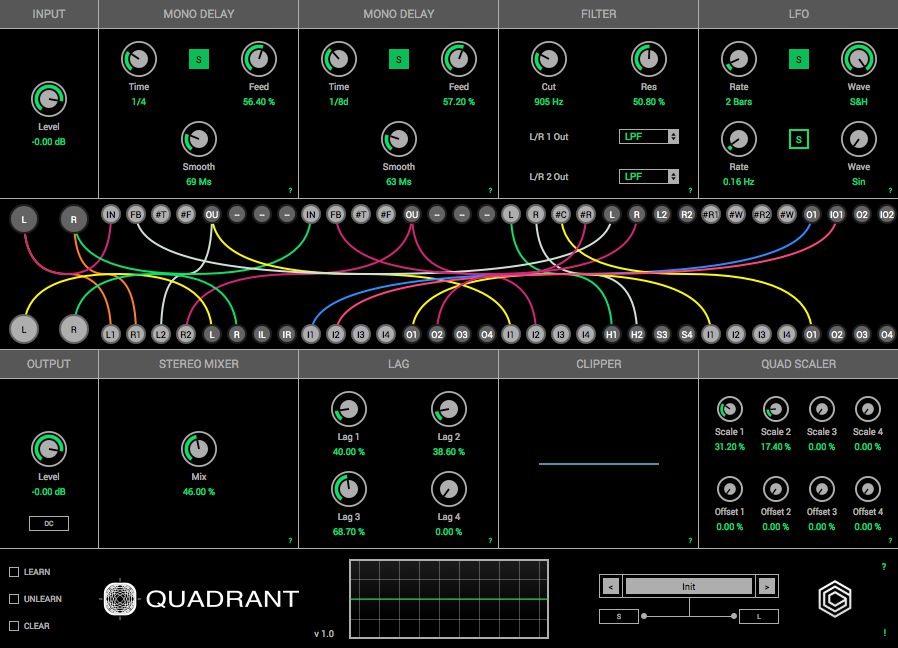 There's plenty of stuff for destroying audio and some of the Math modules do some crazy things. The cabling system is easy to work with and if your patch becomes too unwieldily you can turn in the 'Connection Highlight Mode' which lights up any cable you click on to find out where it's going.

The only thing I'd like to see is more modules really as you find yourself running out pretty fast. There's a MIDI Learn function for realtime tweaks although the automation list (in Logic) is slightly cryptic.

The flip side of Quadrant is that it's not just an effects processor. It can also be used as a simple modular synth. You can't actually trigger 'notes' with it but it will handle the more 'let it run' experimental side of modular sounds.

There are two basic sound generators in Quadrant. A dual FM oscillator and a Noise generator. This may sound basic but you can do a lot with just these two.

It's also best to uses this mode as a software instrument. In Logic it would be loaded as a 'MIDI Controlled Effect'. 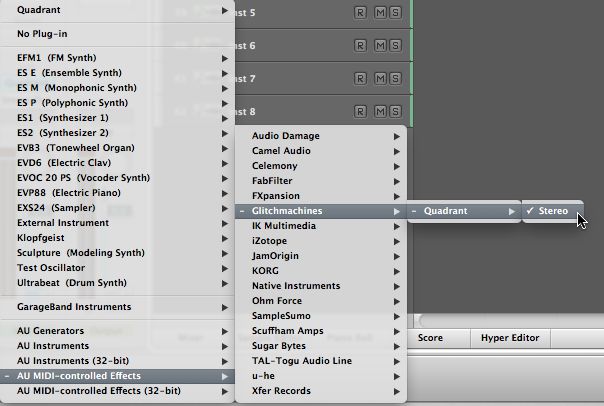 This allows you to use the MIDI module to control parameters via Note Number, Pressure, Velocity and Pitch-wheel. It's impossible to get the FM oscillator to map correctly to chromatic values using notes and there's no ADSR so you'll just have to think of your keyboard as a giant ribbon strip! I did get some nice harmonic series things happening with the keyboard though.

Again it's best to just dive in and play with it. You can get some very cool odd stuff going with the available modules but like I said earlier I could do with four more slots!

While writing this I suddenly realized I'd been tweaking a patch for about half an hour and really enjoying it!

Quadrant is definitely a fun bit of software. It's probably not going to suit most styles of music but if you need crazy then this is a winner for sure. It comes with a huge library of modular synth samples which are again fairly mental. Though I'm personally quite down with that! :)