Language
Glitch by Illformed used to be PC only... until version 2 was released! It was a popular plug-in for those looking to create esoteric rhythmic effects. So how does Glitch 2 perform? G.W tests it out.

I wasn't always a Mac user. There was a brief set of years where I was only PC. I wear the badge proudly. I'm not a loyalist to any company, I'm loyal to the best product, period. Part of my loyalty to the PC platform for a long time was due to the large assortment of plug-ins that were available to the PC, and were seemingly absent for the Mac. But, as Macs suddenly became capable of Bootcamp, and VMware Fusion, and so on, it became apparent that power shift had occurred. Suddenly, we could have the Mac and PC software all on one computer.

One plug-in in particular made this ability very important. But, that one byproduct of using a Mac (that being forgetting other apps because of how efficient everything is on the Mac) made me forget about this plug-in... Well, momentarily.

And, by the time I was fully invested in my new Mac, I decided that I didn't care about using Bootcamp anymore. I just wanted to work where it was most efficient. I did miss this plug-in though. Like many other musicians, I was hopelessly addicted to the plug-in, Glitch. A step sequencer that mangled audio, while still making it rhythmic. Seriously, it's the key to a never ending batch of loops, bad ass leads, basses and crazy cool remixes.

The craziest part was, for the longest time, Glitch was free... Well, on the PC, anyway.

Well, recently this changed. Not only has Glitch been upgraded to Glitch 2, but now it's available for the PC, Mac and Linux with 32- and 64-bit options. Life has improved indeed!

Well, a lot has changed. The Sequencer and the way the effects work in Glitch has been thoughtfully updated. In the past, Glitch only really allowed you to have one effect triggered at a time, however random the triggering might be. In Glitch 2, this is completely different. The effects can actually be triggered on top of one another, thanks to a vastly expanded grid. 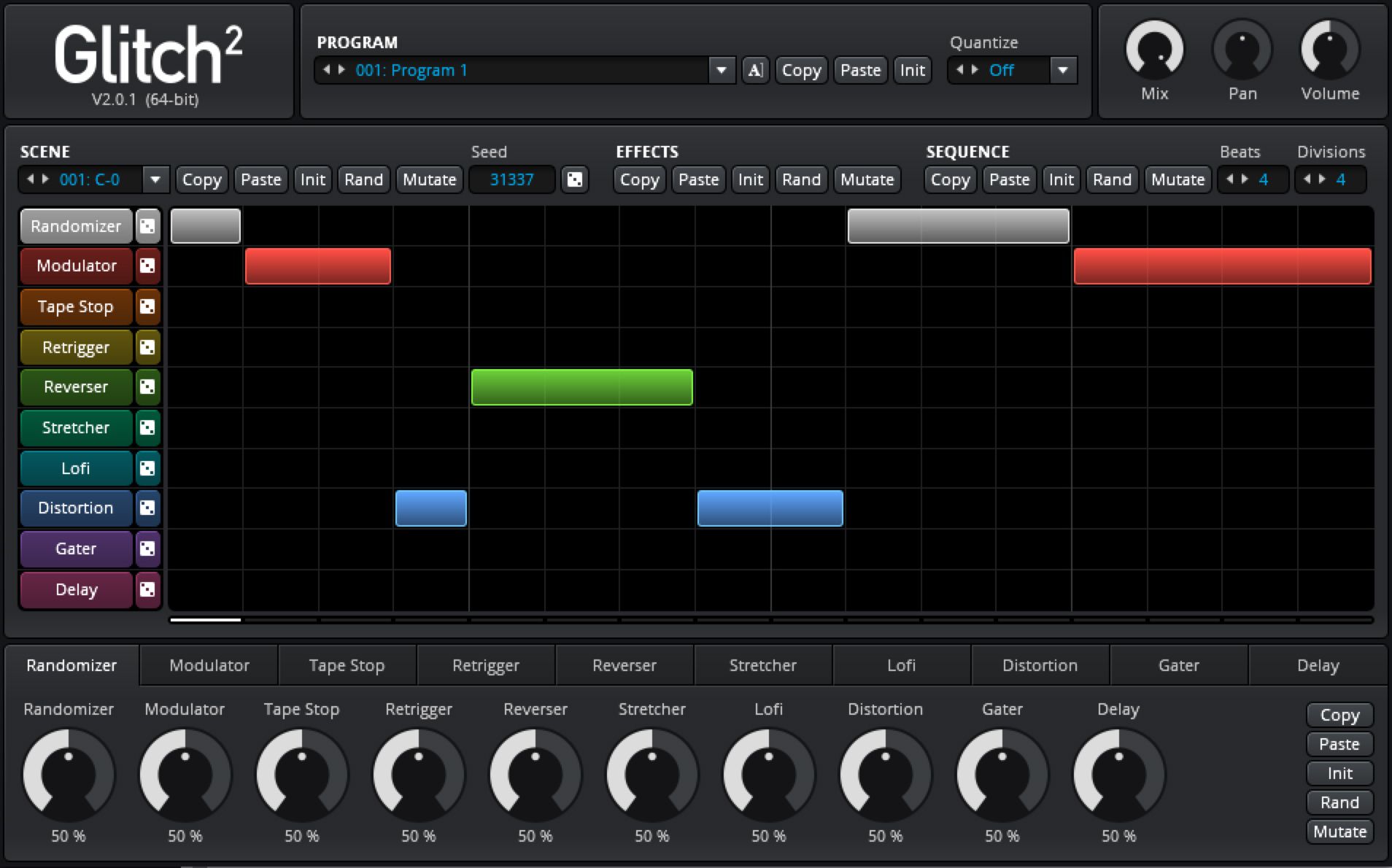 In this much larger grid, effects (as you can see in Pic 1), can be lined up next to one another so that they play on top of one another. This allows Glitch 2 to go from just being a rhythmic sound mangler to the possibility of being another kind of plug-in altogether — A random sound effects generator.

But, don't worry, the guys developing Glitch 2 didn't forget those of us who praise Glitch for its randomness. In fact, they cleverly gave us the old randomizer that we loved in Glitch, in the form of a Randomizer with a grid lane of its own. As a result, you can have scenes where effects are set up to definitely play on specific beats. And, on some scenes, you can have the Randomizer only, randomly kicking out crazy effects arrangements.

But, there's even more randomization...

Within each grid lane, and on each effect, you can also find Dice buttons that randomly generate new patterns for each effect. Or, you can go to an even higher level and have the scene itself randomly generate new scene, or mangle existing scenes. Seriously, if you're tricky enough, you can do full and true 'glitchy' little songs with Glitch... As long as you have an incoming signal.

Oh, and even then, effects themselves can be randomized so that the effect parameters are randomly tweaked. As the website says, “The rabbit hole is deep...”

Another beautiful features is the new ability to be able to trigger scenes via MIDI notes. This allows you to use Glitch 2 in a manner very similar to Stutter Edit, but very different at the same time. For Stutter Edit will only trigger individual effects. The effects are rhythmic in some cases and are slightly layered. Glitch 2, however, lets you trigger complex effect sequences that are perfectly in rhythm. 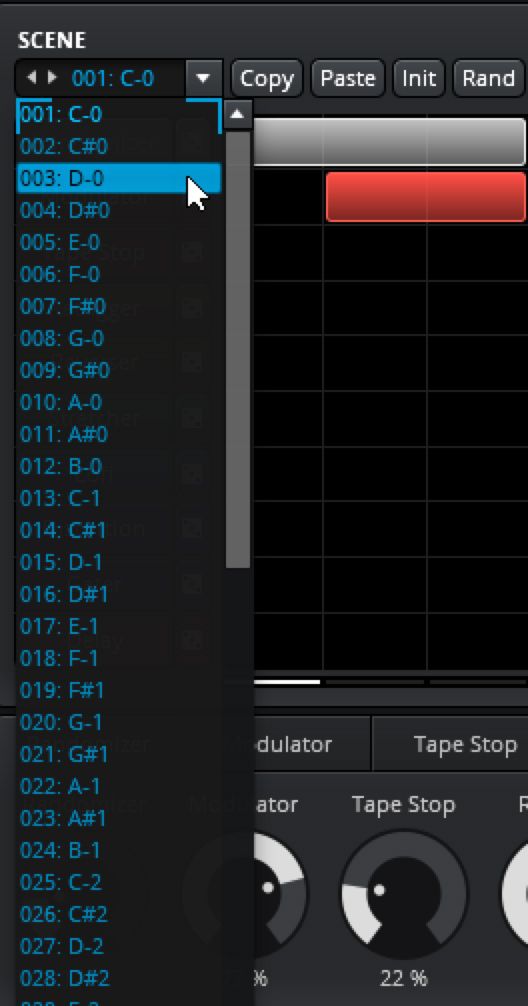 So, if you decided to use Stutter Edit and Glitch 2 at the same time... Well, you'd have a very, very dirty, tweaked and distorted, stuttery song. My goodness...

So, How Does it Work?

Installing Glitch 2 was as simple as it's always been. And, the simple fact that it's 32- and 64-bit made life just so much better, as I'm now someone that's transitioned fully over to 64-bit. Once I had everything going (and believe me, I was excited), I really did feel like I stepped back in time.

Glitch 2 performs just like the old game changer I was used to. Random stutters, slides, modulations and so on came in instantly and made the loops I was using completely new, with that added 'cool factor'.

As usual, I ran Glitch 2 over my entire mix first. I just had to hear what it would do to an entire track. And, like the days of old, it did a completely new and cool remix on the fly. But, to make things even more fun, I started playing with scenes and triggering scenes. This procedure, while it sounds difficult, was actually very simple. Thanks to so many random and mutate buttons, scene creation was a snap.

But, what really surprised me was how light Glitch 2 is on the old processor. I'm rocking an older Macbook Pro, so performance is something I'm constantly very aware of. Anytime I try new plug-ins, I'm always looking to see how large of a stake is claimed on my CPU. Glitch 2 took very little, if any.

Glitch 2 is a very well thought out upgrade to a plug-in that is sure to become one of your favorite tools within your arsenal. And, because it's supported for all major platforms (even Linux), it's crazy not to own it. Sadly, the price has gone up from what it used to be. It's now $60. But, if you consider the amount of cool that will be added into your new mixes... Well, this is small price to pay.

Oh, and if you're one of the guys that missed Glitch the first time because you were only Mac... Well, you'd better jump on this now. You won't regret it.

Gordon
I wish I could control the randomness of it. I need to know what it's going to do to a portion of a loop without wondering if it's going to do something wild on its own. At the moment I can't see how you control that aspect of the software.