Review: Get Connected with Korg iPolysix for iPad

Language
Korg's iPolysix for iPad has been around for a few months, but that doesn't means it's not ripe for review! Lynda Arnold gives this app a spin and explains why it pushes her buttons.

I recently discovered Korg's iPolysix for iPad, a vintage synth reimagined for iOS. The iPolysix has been out since last November 2012, but is still going strong with a very dedicated and talented community of users. From start to finish, I've had one of the best experiences with a synth studio App to date. This is largely due to the interaction I've had with other users on the PolyShare site, a unique interface that allows producers to post, comment and remix each other's tunes. The synth interface and sequencers are great too and allow for infinite musical expression within the limitations of the Polysix classic analog sound bank. At $29.99, it's a little more expensive than other iPad synth studios, but an absolute must for iOS musicians, live performers who use iPad synths and any producer looking to connect with fellow producers around the world.

The Korg Polysix – A Rich History

In order to truly appreciate the iPolysix, a brief history is in order. The Korg Polysix hardware synthesizer first came out in 1981 at the same time as the famed Roland Juno 6. It was one of the first more affordable polyphonic programmable analog synthesizers relative to the more expensive Prophet 5 or Jupiter 8. The Polysix had warm and brassy sounding oscillators, 6-voice polyphony, 32 programmable sound banks and effects like chorus, phaser and ensemble that helped to produce a fuller sound. Korg developers evolved its most famous synthesizers into software instrument versions in 2004 with the release of the Legacy collection, which included the Polysix. Much of the Polysix software interface was used in the development of the iOS version. 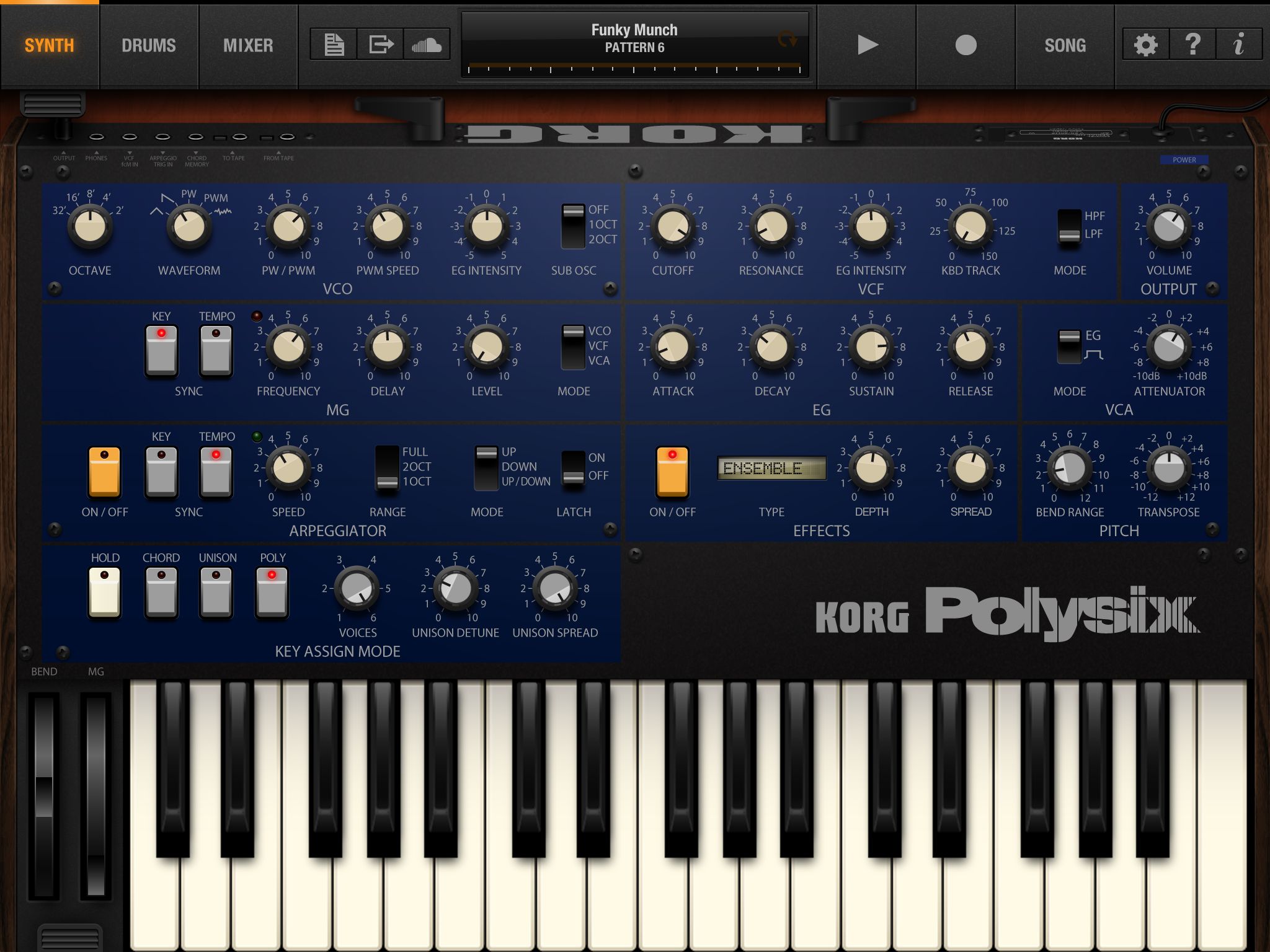 The user interface of the iPolysix is very intuitive and allows users to jump right in and start creating. There are two synth tracks and 6 drum tracks that you can also load melodic or harmonic sounds in to maximize their usage. The synth layout is similar to the existing software instrument. I immediately loaded up some presets and started to edit them, making my own presets. 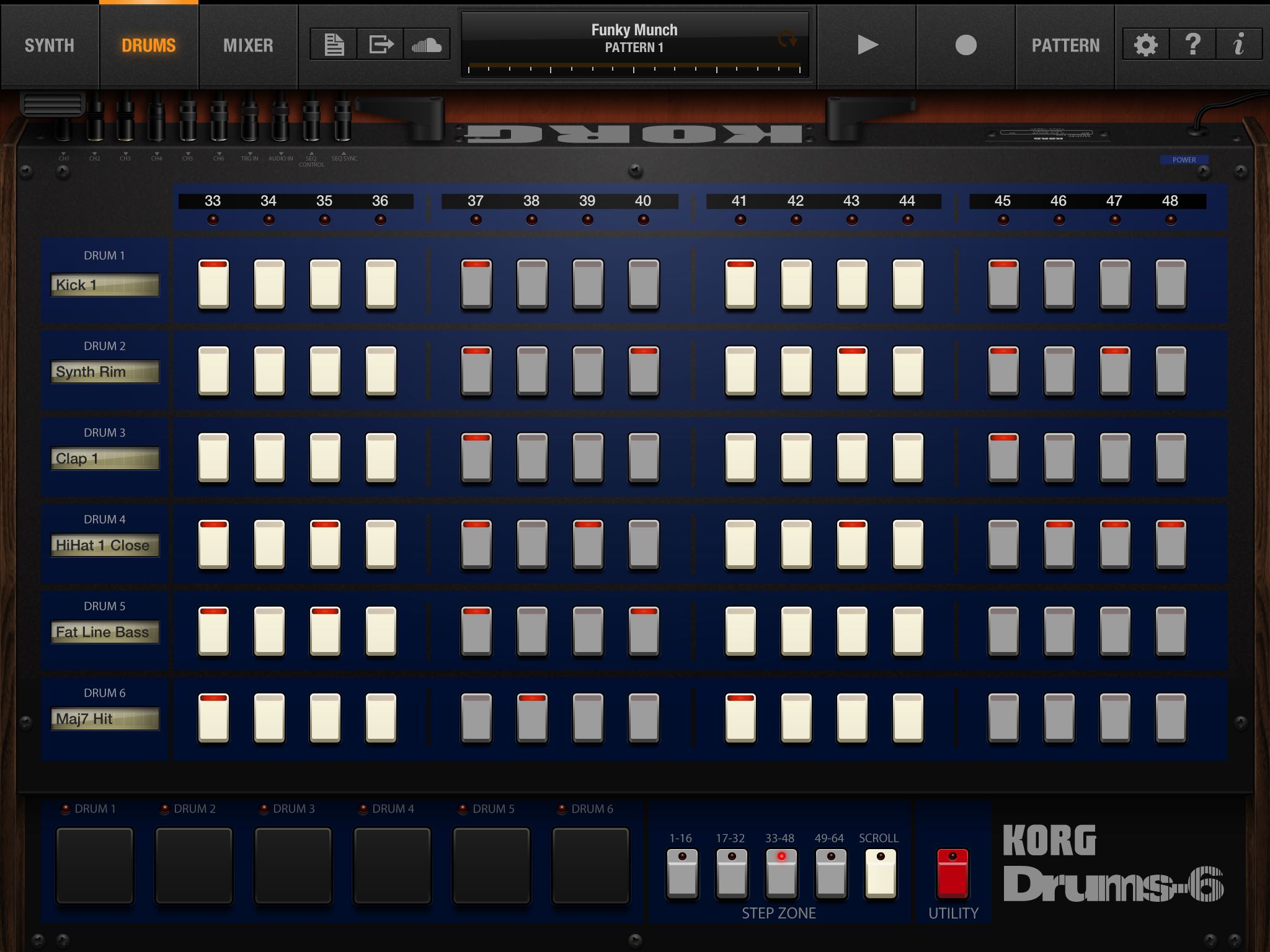 Pic 2 - Drum Sequencer in the iPolysix

Using the 64-step Drum Sequencer is very fun, especially with a touch screen. I'm able to dial up groove in minutes, editing and repositioning drums hits on the fly. There are a limited amount of drum preset sounds, but they can be edited in the synth editor provided for each sample. 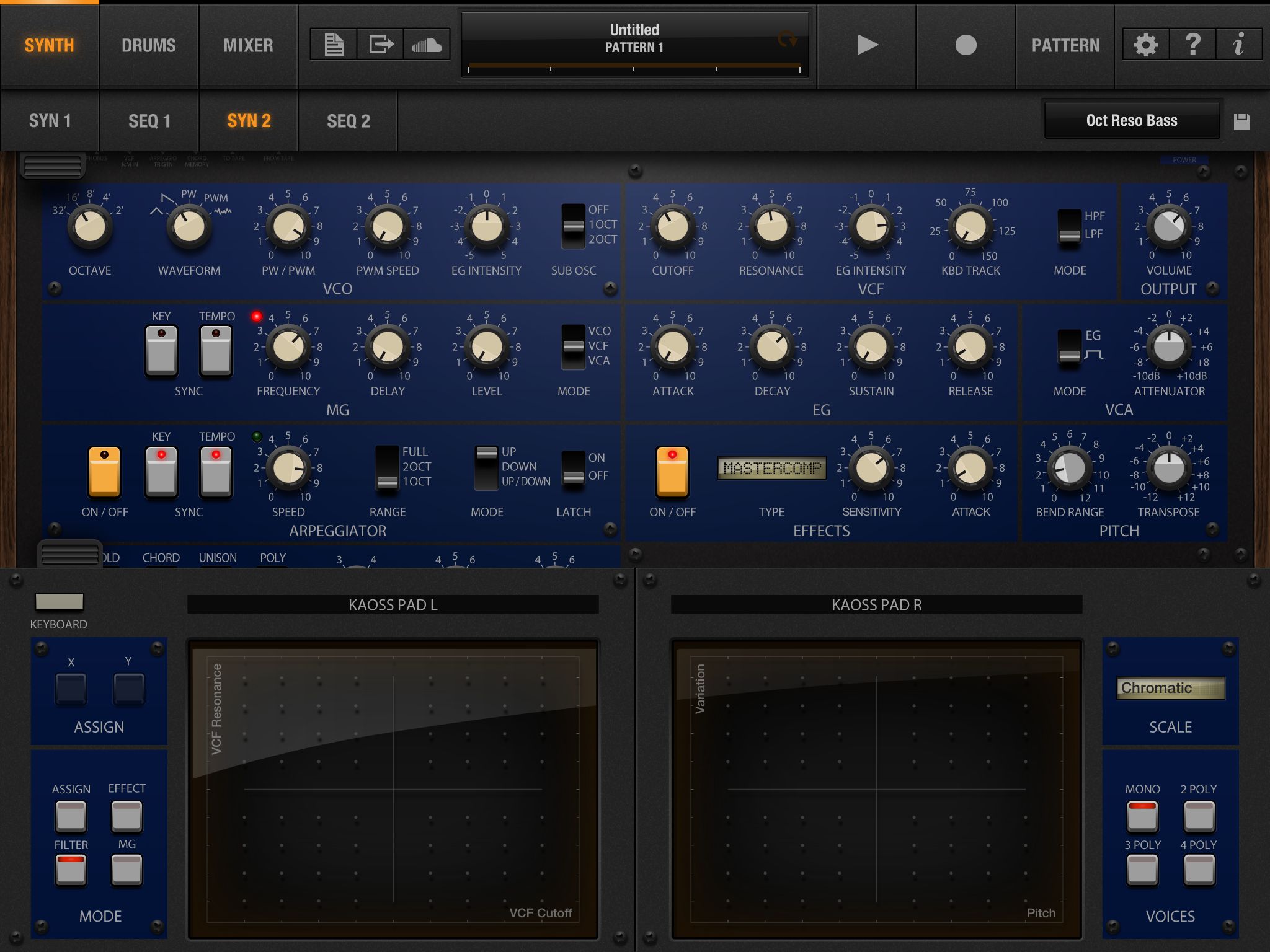 Another neat feature of the iPolysix is the integration of Kaoss Pads. Dual Kaoss Pads can be swapped with the keyboard and provide endless fun for filtering, sweeping and more. This is a perfect example of Korg combining old and new technology. 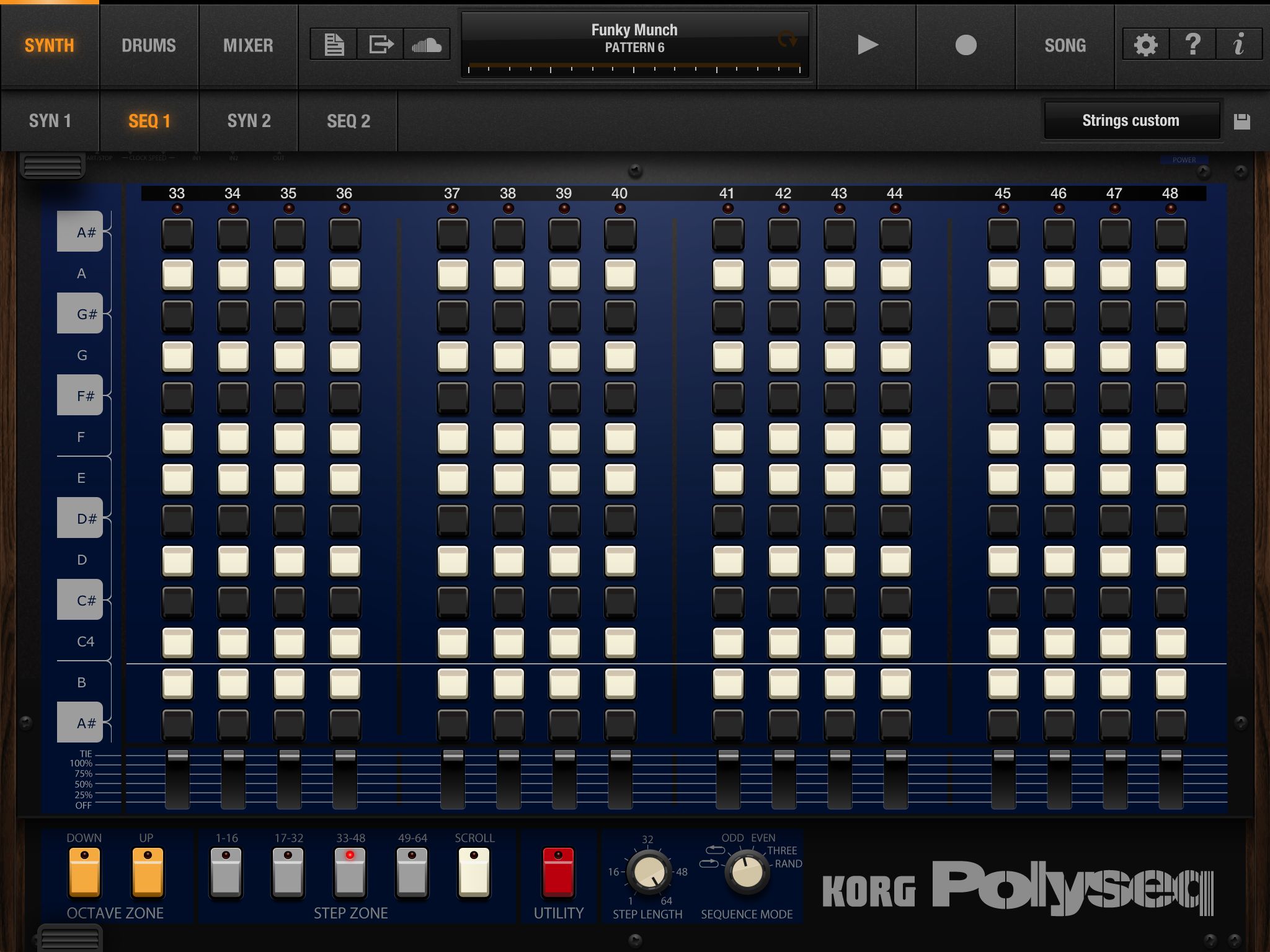 The PolySeq synth sequencer is based on the traditional midi piano roll and displayed in black and white buttons across a possible 64 steps like the drum sequencer. It takes a little time and patience to program parts as well as scroll through the octaves to get to the right notes, but it gets faster with practice. I also record using the keyboard and then edit my parts in the PolySeq. 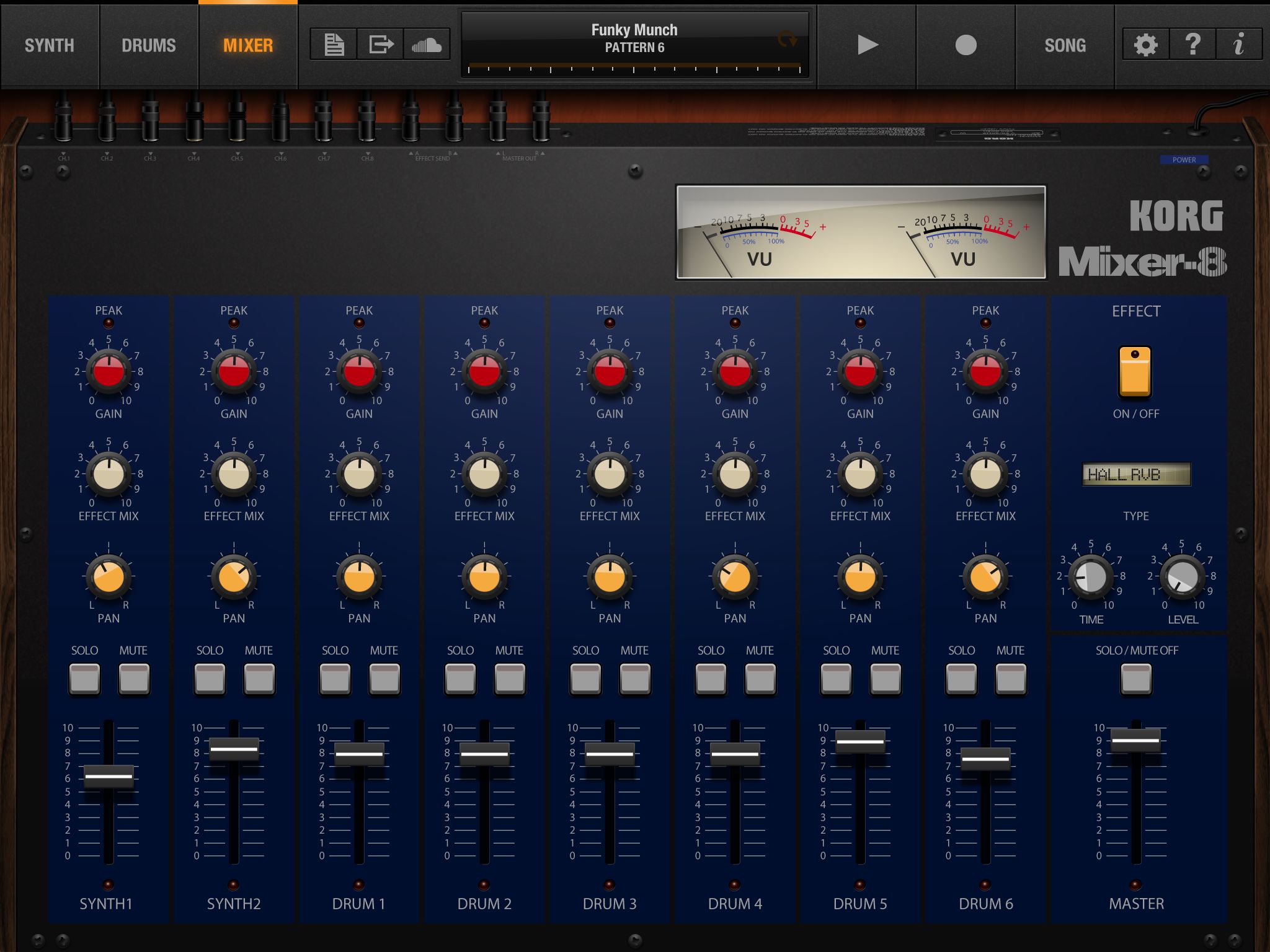 The simple iPolysix mixer provides faders for the two synth tracks and all 6 drum tracks. No EQ is provided, but gain, master effect, mute/solo and pan are all there for each track. It helps to use studio monitors to listen to your track before rendering for another mix perspective. Selecting, copying, pasting and clearing patterns is easy in this window. I audition my various patterns as I go along to see how they sound in succession. This helps to organize my parts before laying them out in the song layout window. 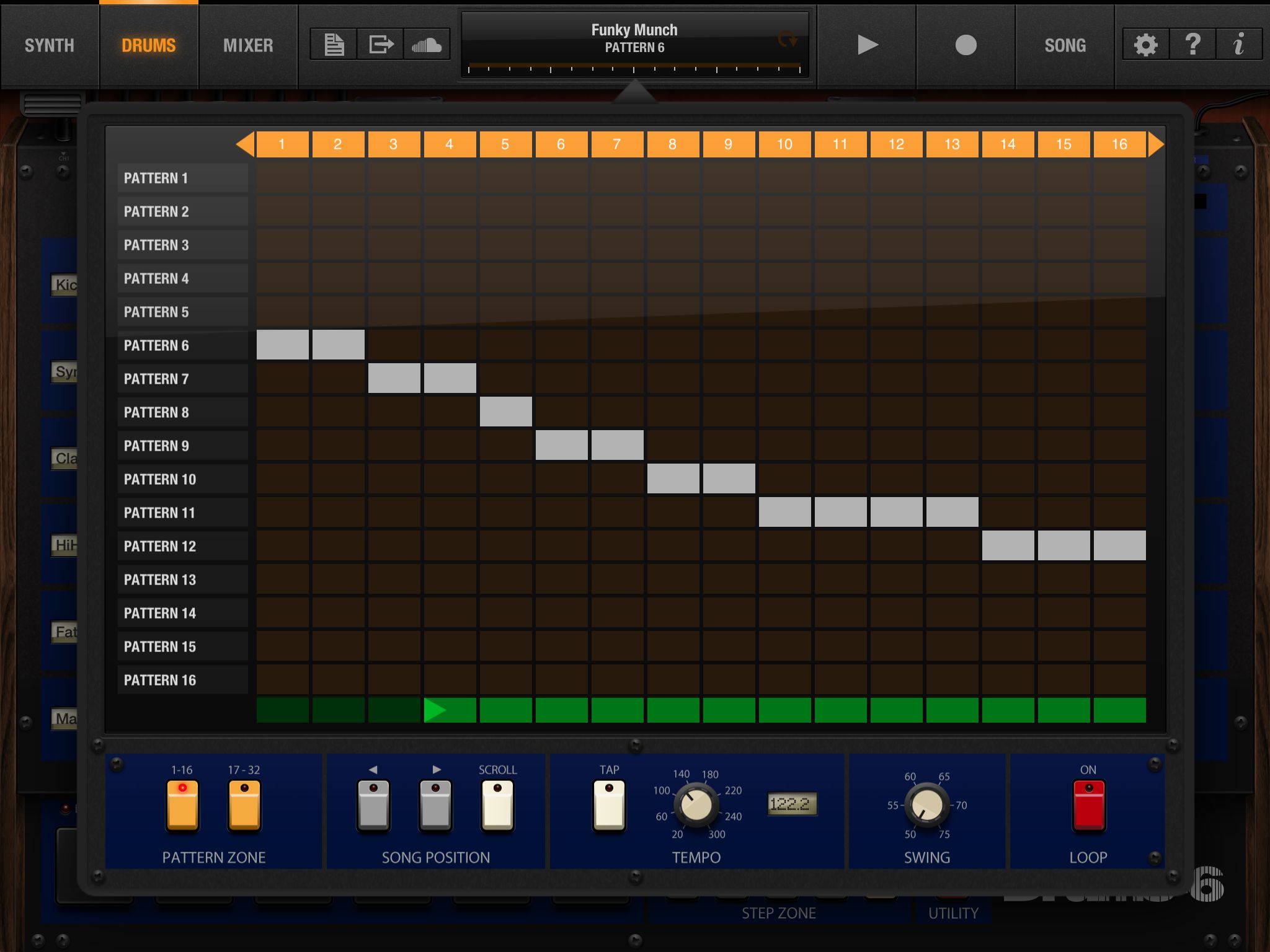 Once I have my arrangement plan, I switch to song mode and arrange my patterns or loops in the song layout window. It's a different way to work requiring you to be more organized as you go along. 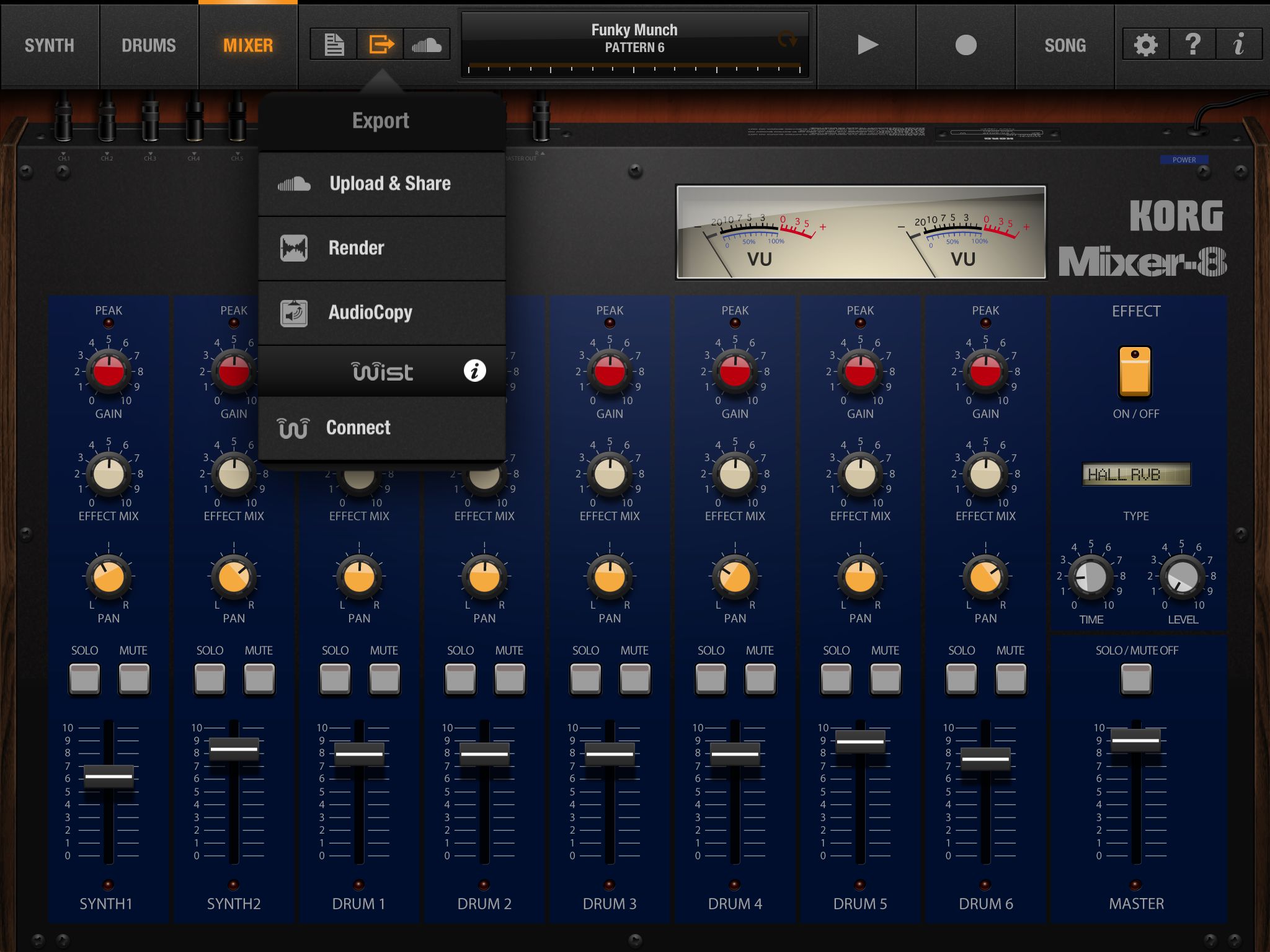 Rendering and uploading a finished song to PolyShare is incredibly easy and I can't say enough about how smart this design is. PolyShare is not only an in-App streaming and sharing tool, but it is also powered by SoundCloud. So, every track you upload to PolyShare also shows up on your SoundCloud page. This allows you to share a song with other fans and friends who are not on PolyShare while at the same time gaining new fans through the PolyShare interface. Comments made to a song show up on both pages as well. Pic 9 - My tracks on PolyShare

On PolyShare, you can listen to songs that are being uploaded daily in the streaming section or listen to featured tracks chosen by the Korg team for inspiration. Producers have the ability to 'Like' and 'Follow' other artists and also remix songs if the artist has made the track available for remixing.

I was excited to have my first track 'Edge it Out' featured in the Korg iApps Featured Tracks Vol 2. This success spawned a couple great remixes by fellow producers. It's neat to hear how other producers use the same synth to remix your work. Building Community through Sharing and Collaboration

There's no doubt that the iPolysix is a powerful synth studio capable of generating a multitude of interesting electronic compositions of many styles with its classic sound. What makes this App come alive however, is the integration of PolyShare. The inspirational interaction between producers is the stuff that keeps us pushing forward to be more creative with each composition. In our current digital making music world, producers often work alone and many do not necessarily perform on a regular basis. Interactive sharing tools built into Apps help to bridge the gap between making music in a bubble and building community with like-minded music making enthusiasts worldwide. Major thumbs up to Korg for this evolution of the Polysix!