Language
Jordan Rudess' Wizdom Music and MoForte have partnered up to create something rather special: GeoShred. This app is super fun to play, highly-addictive and innovative. Find out why in the full review.

Jordan Rudess is the main reason I tend to get all giddy whenever Wizdom Music releases a new app or a major update for one of their current offerings. Knowing that one of the hardest working keyboardists in the business is the main creative force behind a software company gives me a sense of confidence that an app is going to be truly ‘relevant’ to my workflow as a performing musician. With Geoshred, Jordan and his team have created something truly unique and creative. I’ve had access to the various betas and release candidates for a few weeks now, and I’m ready to share what I’ve found. 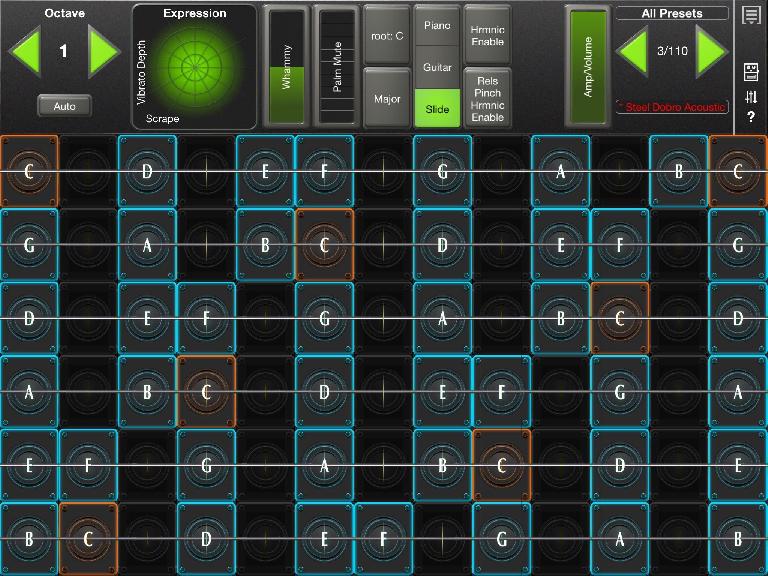 Geoshred is a completely different animal from Geosynth. Let’s get that out of the way immediately. The sounds in Geoshred are built upon guitar sounds, and they range from spacey acoustics to face-melting lead patches. For keyboardists or other musicians who want their sounds to cut through the mix and truly blur the line between what a keyboard solo and a guitar solo sound like, you need look no further. 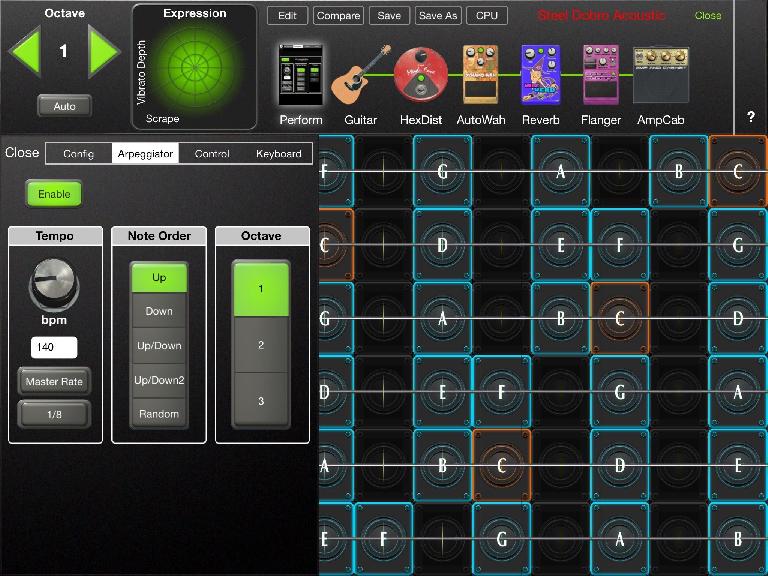 One of the things that I had a hard time with in Geosynth was the layout and controlling what octave I was playing in. The app was truly a MIDI tweaker’s dream and offered so much capability, but I found that the user interface required quite the learning curve. This isn’t the case at all with Geoshred. The incredibly expressive grid is laid out quite conveniently, and the controls to adjust what octave you are currently playing in are immediately evident. The boxes to adjust the tonality, scale, and key of the grid are also ‘front and center’. This makes it incredibly convenient to adapt Geoshred to live use and make it work with whatever chord progression you need.

The ‘string’ paradigm that Geoshred works in just… works. It’s incredibly transparent, and it does a great job of making you ‘feel’ like you’re playing both a guitar and synth, somehow at the same time. I often found myself quickly forgetting the mechanics of the interface and simply letting my fingers express phrases and musicality. You truly feel ‘connected’ to your sound in a very unique way that is hard to describe without actually trying it. 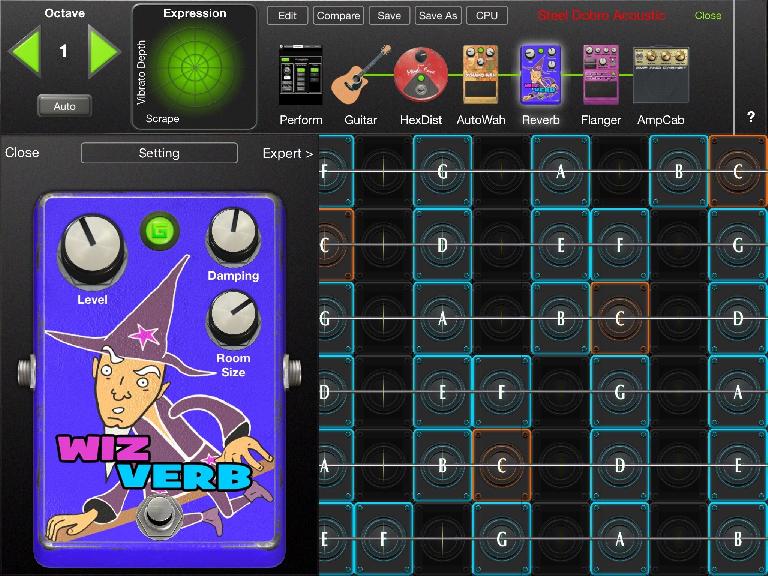 The sounds are absolutely fantastic. They are reproduced at an extremely high resolution and there is quite a lot of dynamic range. The included amp simulation and pedal effects are quite nice, and they are easily enabled and rearranged inside of your signal flow. As expected, the reverbs are lush, the choruses are wide, and the distortion is edgy. Combined with high-quality guitar samples, Geoshred scores a big win in the sound quality category.

Geoshred doesn’t try to replace your guitarist, but allow for a new spectrum of sounds from your keyboardist (or iPadist?). These sounds range from clear reproductions of acoustic tones to completely reimagined guitar/synth tones. There are a load of presets included, and they’re great, but the true fun lies in tweaking your own—which is incredibly easy and intuitive.

I’m a big fan of the Wizdom Music apps, but I’m a huge fan of Geoshred. After only a few weeks, it’s easily my favorite. It has earned its spot on the first page of apps on my iPad, and with the real estate offered by the new iPad Pro, it truly turns your iPad into a wonderfully expressive new type of instrument.