Language
The Genelec 8351A SAM studio monitors winners of a NAMM 2016 TEC award have some innovative features designed for accurate monitoring. Sara Simms gave them a good listen to in this in-depth review.

I was lucky to be able to try out a pair of the Genelec 8351A  SAM™ Studio monitors for this review. After becoming intrigued with their unique shape, I had to find out for myself if they sound as good as they looked. I spent time with them in my studio, and I was impressed with their excellent sound quality and futuristic design. If you’re looking for sweet and accurate sound while you mix, look no further—you’ve found your match. Here’s a closer look on Genelec’s latest offering, the 8351As. 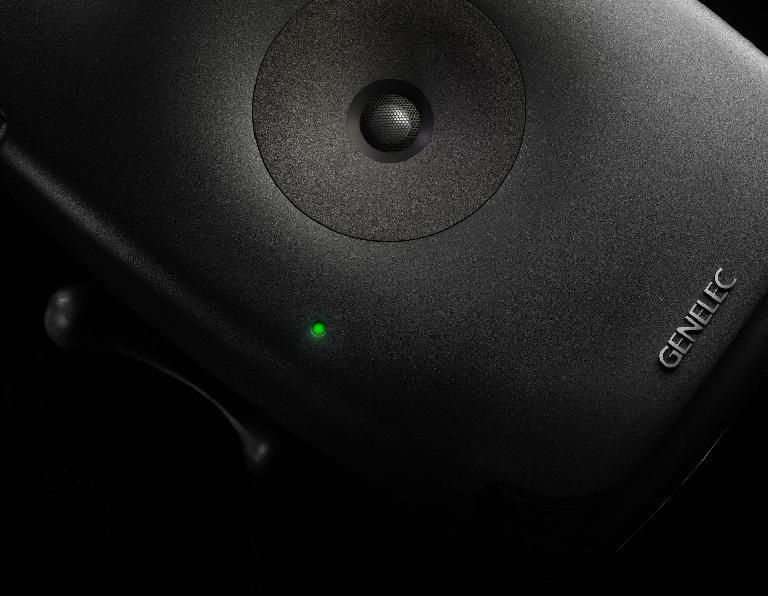 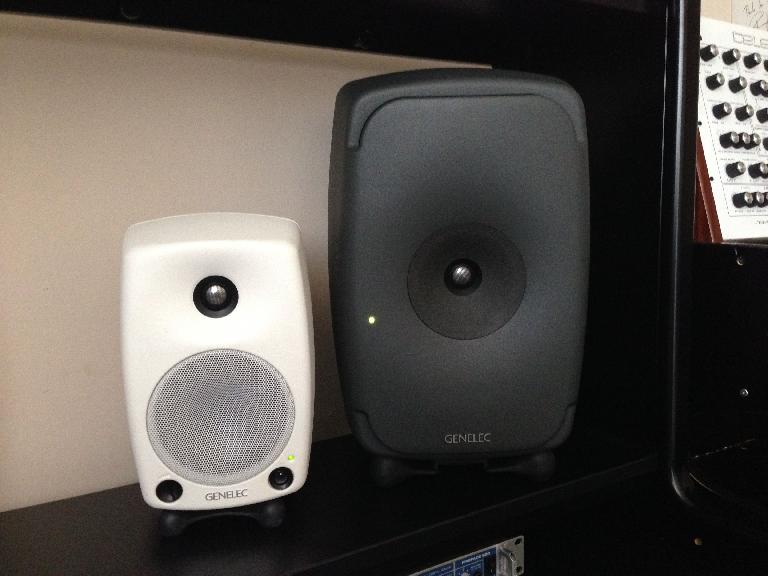 The 8351A SAM™ monitors are substantially larger than Genelec’s smaller portable 8030A model.

The Genelec 8351A SAM™ brochure states that the 8351As are 'a delightfully compact coaxial three-way active monitor'. Upon lifting all 42 lbs of these speakers onto my console, I wouldn’t exactly say that compact is the best way to describe them. It’s a good thing I’m in decent shape, otherwise lifting these out of the box would have been a challenge! Before placing them on my console, I took extra precautions to make sure that my studio desk would be able to withstand an extra 84 lbs of weight. If you’re thinking about investing in these, make sure you have the space and a desk or speaker stands that can handle their weight. 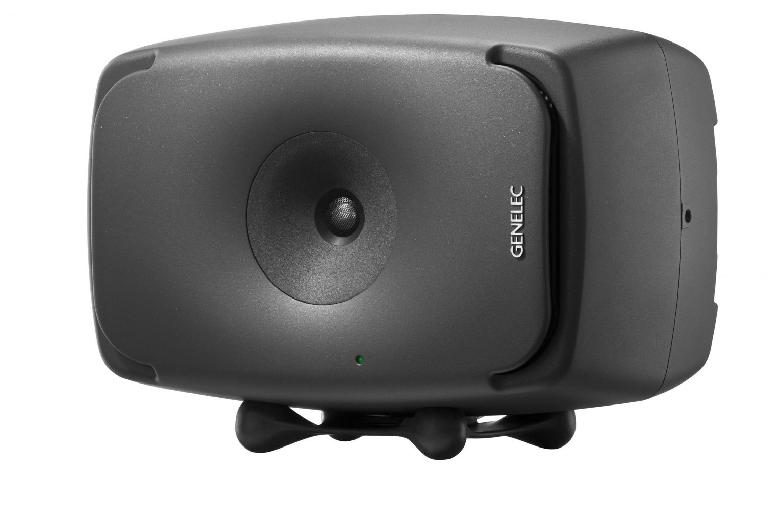 Genelec’s 8351A SAM™ Studio monitors have a look that’s both stylish and futuristic. They come in both classic grey and white, and feature Genelec’s Minimum Diffraction Enclosure (MDE™) for uncolored sound reproduction. Housed in an aluminum enclosure, Genelec’s 8351As are designed with rounded edges and a gently curving front and side for the best sound stage imaging qualities and flat frequency response. The rounded edges are not for cosmetic purposes; a common problem with free-standing loudspeakers is that the sharp corners act as a secondary source of sound through reflections (diffractions). Genelec innovated enclosures that featured rounded edges in order to improve the frequency response of the speakers.

There are dual woofers on either side of the speaker that extend the directivity control; these woofers are the long openings that are at the top and bottom of the speaker. One of the most unique features of the 8351A SAM™ Studio monitors is that they can be used in either orientation, either horizontally or vertically depending on your studio setup and preference.

After listening to many records, tracks and my own mixes, I was taken with the sound of the 8351As. All of the frequencies sounded so clear; my tracks came shining through, and I could hear precise detailing in the mid-range. The stereo imaging was also very accurate. Tracks in all genres sounded like they were intended to sound when produced and I thoroughly enjoyed the rich and warm sound the 8351As emitted. I thought the 8351As sounded good on their own, but then I tested them out with the GLM™ system and discovered they were capable of sounding even better. 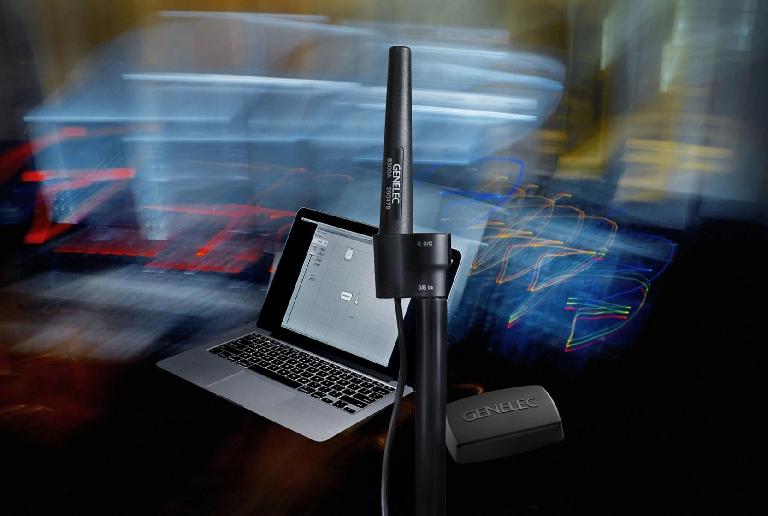 The Genelec 8351As are best utilized with the Genelec Loudspeaker Manager (GLM™), an intuitive and powerful monitor control networking system that manages connectivity to all Genelec SAM™ studio monitors. Genelec SAM™ technology integrates the 8351As by compensating for detrimental room influences. Monitors can be aligned and adjusted for level, distance delays, and compensate for the equalization imperfections in rooms using Genelec’s the state-of-the-art AutoCal™, an automated calibration system.

Testing out the GLM™ system involves connecting the monitors via LAN cables to the GLM™ box and setting up a Genelec microphone at the listening position. The GLM™ software analyzes the acoustics in your room and cuts frequencies depending on your room’s acoustics. It also automatically aligns every monitor on the network in terms of level, timing, and equalization of room response anomalies. I listened to audio with the GLM™ Autocal™ system off, and then turned it on and discovered the Autocal™ system made an incredible difference. My own room has a dip in frequencies at around 100 Hz and a peak at about 135 Hz. With the Autocal™ system off, the sound was slightly muddy due to the bass boost. Turning the Autocal™ system on removed the bass issues, and I could hear the midrange frequencies much more clearly. This technology is sonically stunning; the Autocal™ settings are stored in the monitors, so that the 8351As are always perfectly calibrated. 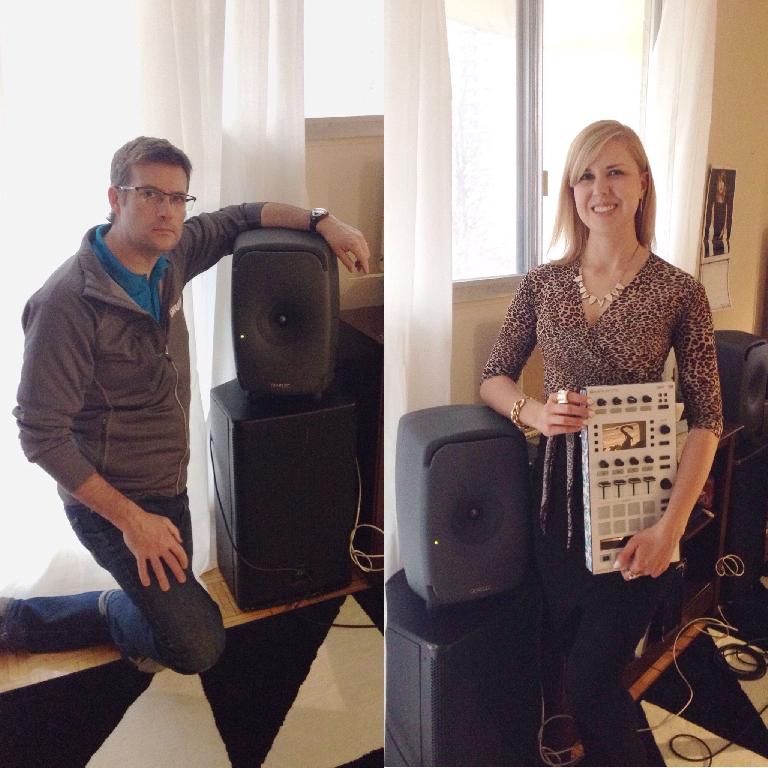 Adam Plante, the Western Ontario Sales Representative from SFM (Canada’s Genelec distributor) and I tested out three different speaker configurations in my room. We wanted to discover if my room’s EQ curve would be improved by changing the position of the speakers, and to see how the GLM™ system would adapt in different positions. The GLM™ system worked quickly and compensated for the equalization curve due to the change in the speaker’s positioning. No matter where we placed the speakers, the GLM™ system had them sounding great. 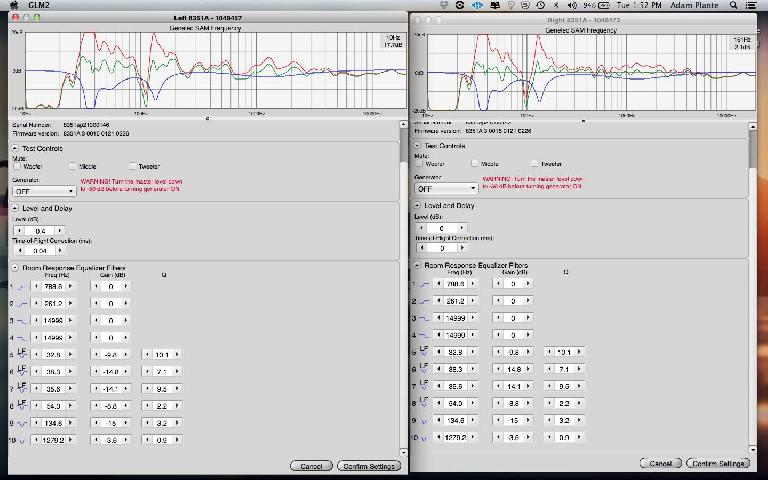 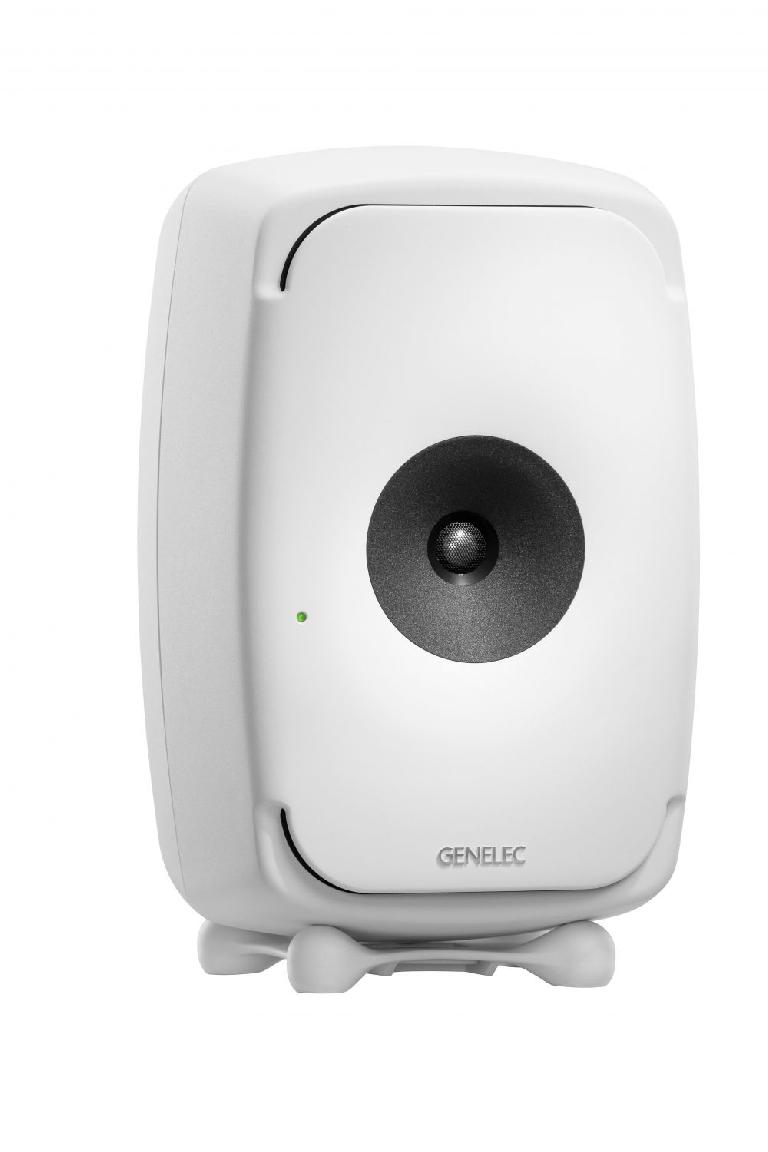 The 8351A’s have a non-traditional 'three-way' design; a typical three-way design has a tweeter on top, a mid-range speaker in the middle and a sub woofer in the bottom. What makes the Genelec 8351A’s design so different is that two matching 8 1/2 x 4 inch oval 'racetrack' woofers surround one 5 / 3/4 inch + DCW™ Coaxial Midrange/Tweeter MDC™ in the middle of the speaker. Designed and made in-house in Finland, the Acoustically Concealed Woofers (ACW™) technology represents a breakthrough in electroacoustic design, and the Maximized Directivity Control Waveguide (MaxDCW™) produces controlled directivity over a wide frequency bandwidth. The unique dual woofer design extends directivity control to bass frequencies, which can be heard down to 32 Hz. The position of these oval woofers was chosen to extend the idea of coaxial acoustic radiation to the low frequencies. When the two woofers are used separated by a distance, the system of two woofers behave acoustically like one giant woofer the size of the distance between the two woofers. This innovative design makes it possible for the monitors to produce music perfectly, in both vertical and horizontal directions.

The 8351As are attached to a vibration insulating IsoPod (an Isolation Positioner/Decoupler) that was designed to address the unwanted mechanical vibrations that happen when monitors are placed directly on a table or on a console meter bridge. The IsoPod helps to position the monitors either vertically or horizontally + or - 15 degrees to help point the acoustic axis precisely. 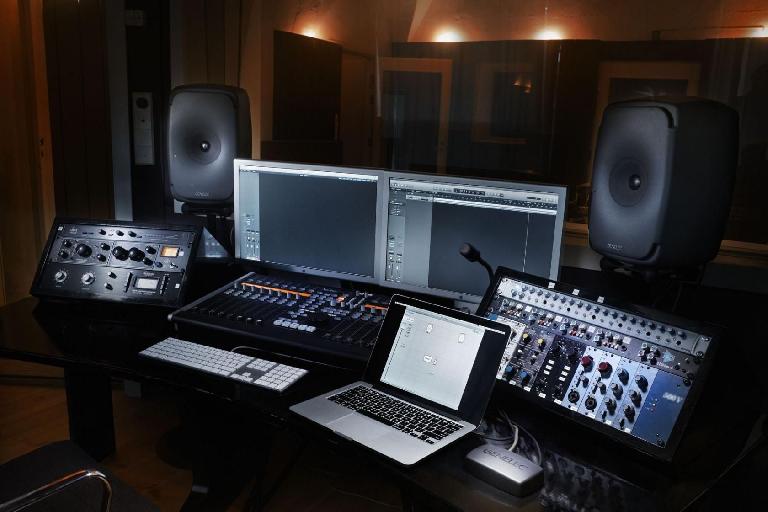 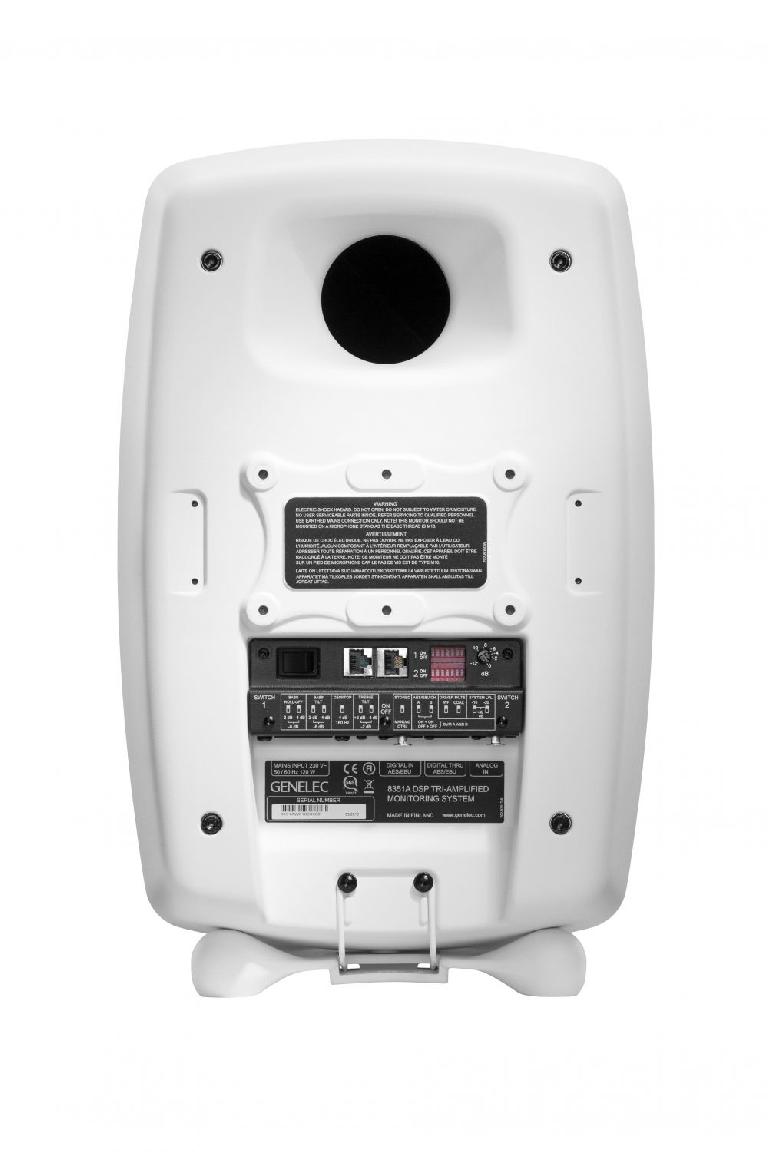 As far the inputs/outputs are concerned, the 8351A’s feature one XLR analogue input, 2 XLR AES/EBU input/out and 2 x RJ45 control network connectors. The sound levels can also be adjusted on the rear of the speakers; mine were set to 0 dB the entire time I was testing them and the monitors still gave me plenty of power. The level knob is on the monitor to be able to dial in 85 dB, for example, at the listening position for broadcast and professional applications.

The Genelec 8351A SAM™ monitors are incredible; they impressed me much more than expected. They deliver beautiful, clear sound that paints an accurate picture of the frequency spectrums in tracks, especially when used with the Genelec Loudspeaker Manager (GLM™) software and hardware. With their slick and futuristic look and breathtaking sound quality they’re sure to become a popular monitor in both home and professional studios. Now that I’ve had a listen to my tracks and mixes on them, I’m brainstorming how to pull in a few more gigs so I can buy a pair!

Cons: Quality always comes with a price tag. These monitors are not inexpensive. They’re also not light, once they’re in place, you’re not going to want to move them around much.