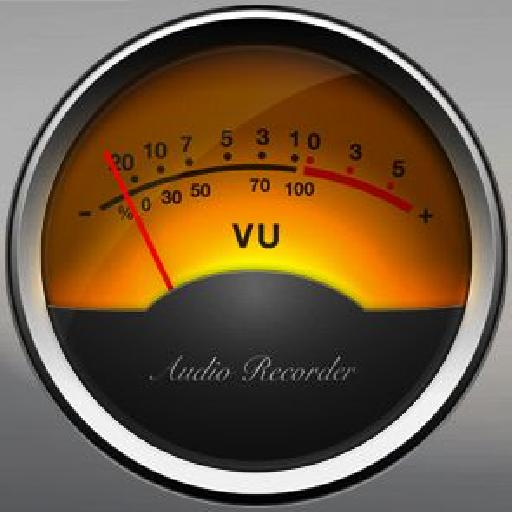 Language
It's official, GarageBand for iPhone comes highly recommended! Hollin Jones waxes lyrical about this iPhone version so it's time to put down whatever you're doing and find out what the fuss is about.

When I first saw GarageBand for the iPad, I thought it was pretty unlikely that it would ever make it to the smaller screen of Apple's other handheld devices. There was simply too much going on, too many points of user interaction with the screen to make it possible. But the release of this Universal app shows that you should never underestimate Apple's talents. It is, without gushing too much, a quite remarkable triumph of interface design and reminds us that for every questionable decision (iCal's new look in OSX Lion), there's a piece of engineering brilliance to make up for it.

If you have already bought GarageBand for iPad, you will be able to download it for your other iOS devices for free. If you haven't already got it, it's a minuscule £2.99 from the iTunes store, which frankly is absolute peanuts for an app this good. It weighs in at a shade over 500MB thanks largely to the bundled loops and Smart Instruments, but will run on devices as old as a 3GS or a third generation iPod Touch. It ran beautifully on my iPhone 4 under iOS 5, though it will also run on iOS 4.3.

The app, functionally, is virtually identical to the iPad version. In fact the only differences are in the layout; the features are the same. The 1.1 update that brought Universal compatibility also added some new features including custom chords for Smart Instruments, 3/4 and 6/8 time signatures, song transpose, automatic fade out, uncompressed audio export and adjustable velocity for touch instruments amongs other things. You'll be able to use these regardless of the device you're running it on. Let's have a look at how it all works by taking a bit of a tour.

A tour of GarageBand for iPhone

The first thing you'll need to do after setting the project tempo is to choose an instrument or an audio recorder to get some stuff down. The list of instruments is all present and correct and these can be swiped left and right to select them. 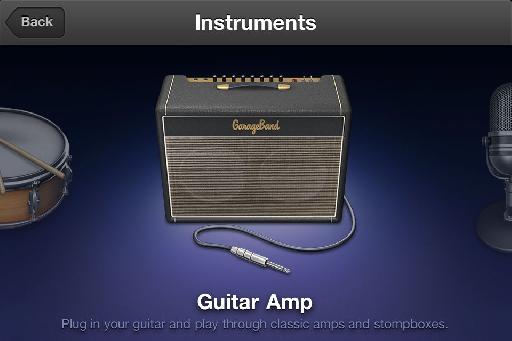 You get a great selection of MIDI-triggered instruments including synths, pianos and organs as well as rock and electronic drum kits, audio tracks with effect presets applied which are called Guitar Tracks and also Smart Instruments which let you play either notes or chords manually and some of which include arpeggiators. The MIDI stuff works by touch, so you can play the drum kits for example by simply loading one and tapping away. There's project-wide quantization so even if you're not a great player, you can still get good results. 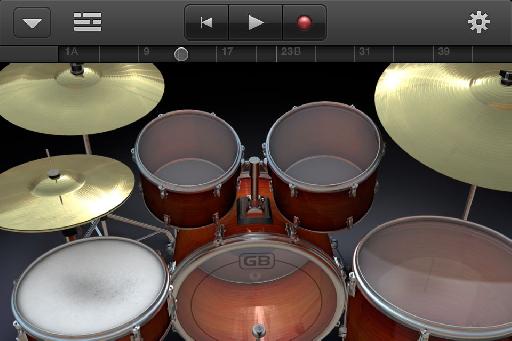 If you prefer to have GarageBand do the work for you, you can use a Smart keyboard, guitar or bass and either play the notes manually or have the software create chords for you which you can play by pressing the chord names. 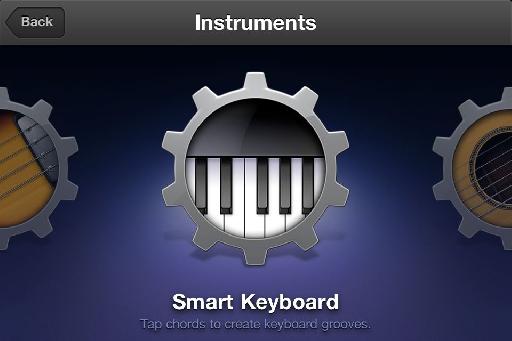 Song management is performed by going to a sort of top level menu and you can swipe between projects and also use the Share, Export New and Delete buttons along the bottom to manage your projects. It's possible to email a song directly from the device, or send it to iTunes. Project sharing still works by going to GarageBand's App Sharing tab in iTunes and dragging project files in and out. When a project is on your Mac you can open it in the desktop version of GarageBand and add more tracks and third party effects. 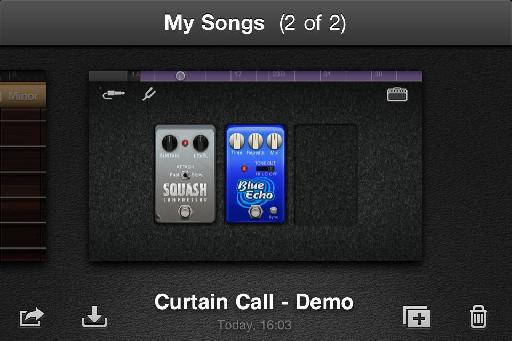 The Smart Drum instrument is excellent and lets you choose kits and then drag the various drums into a grid, positioning them to set their volume and playback complexity. You can hit the Dice button to create a random pattern. 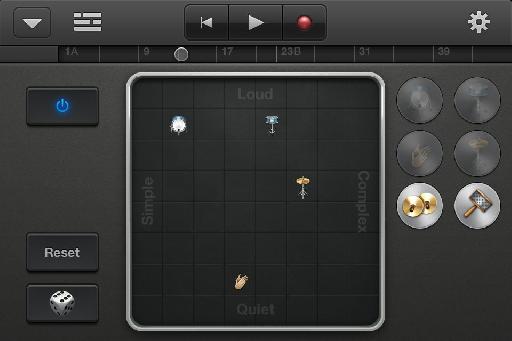 The Audio Recorder is for capturing sound through the built-in mic or any connected microphones. You'll get better results from a specialized iOS mic, but the built-in one works well enough. 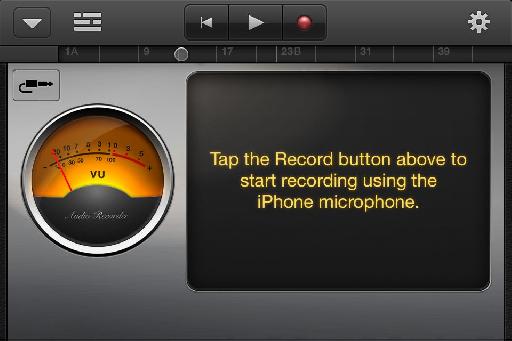 Wherever you are, clicking on the top left corner menu will reveal a main navigation menu from where you can go back to the song list or choose a new instrument. Excellent use is made of screen space. Here for example, with the Smart Bass instrument you can see your strings, MIDI part and mixer controls all on the same screen: 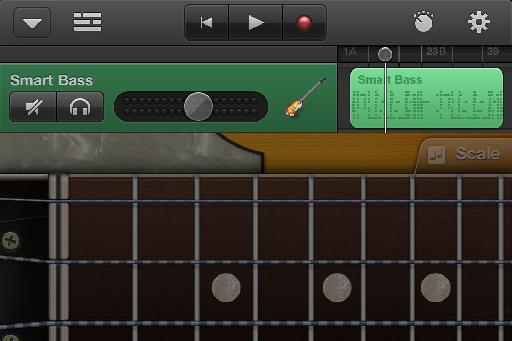 There's a built-in sampler and after recording your samples these can be edited using onboard waveform editing tools. Swipe the sequencer screen to the right and reveal the mixer complete with mute and monitoring controls. You can pinch and zoom in and out too, which works brilliantly. 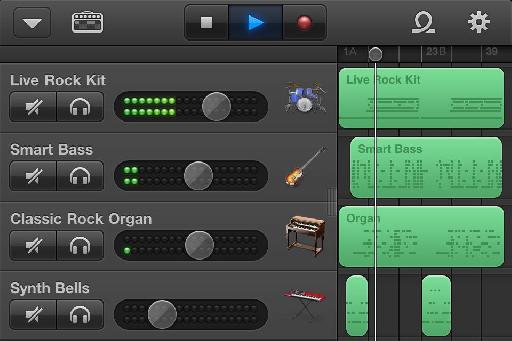 Double tapping on a MIDI or audio part in the sequencer reveals edit controls. These work well though there's still no ability to edit MIDI notes, which is a shame. 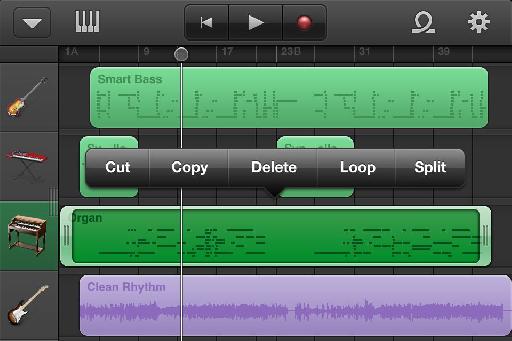 You can mix and match MIDI and audio parts and build your song up in sections or compose in a more linear fashion. GarageBand comes with loads of loops and these can be dragged into a project. You can even search using tags to make things easier. Loops are a great way to quickly build a backing part. 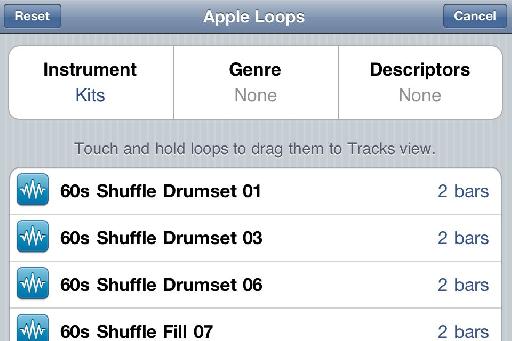 Each of the instruments has several variations which you can select to change the sound set they use for playback. 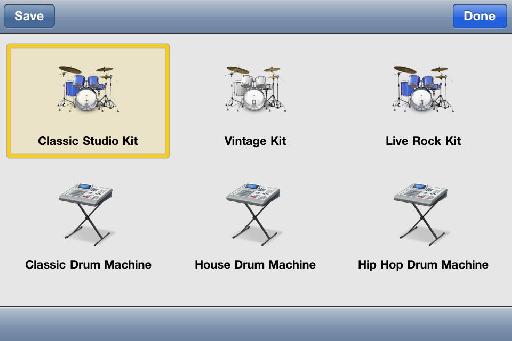 When you record audio there is noise gating and an optional automatic level control to ensure optimal levels. 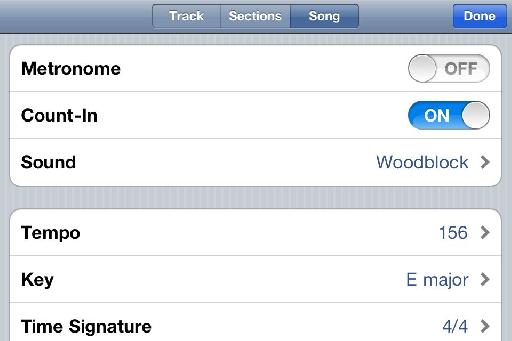 You can build your song up in sections, each of which can be a different length. 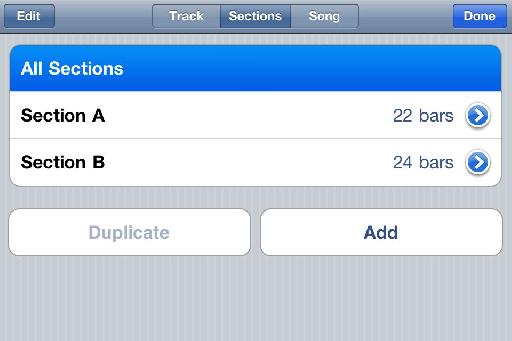 Each track has its own settings including level and pan, echo and reverb. 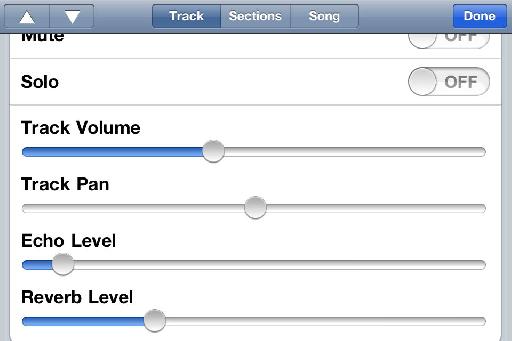 You can play keyboards with velocity and glissando as well as an arpeggiator. 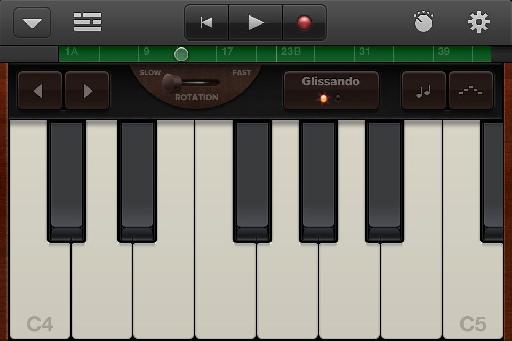 Most instruments have a controls section where you can tweak the sound. Here for example, you can set up the Hammond organ: 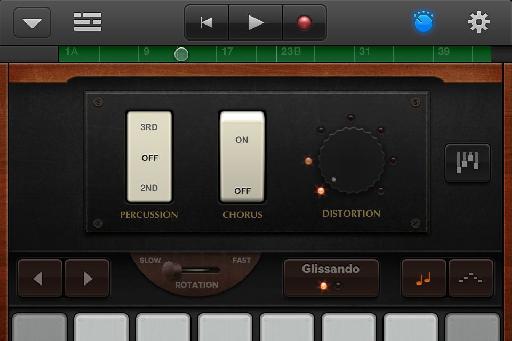 The guitar and bass instruments are particularly clever, allowing you to strum, pick and even bend notes. 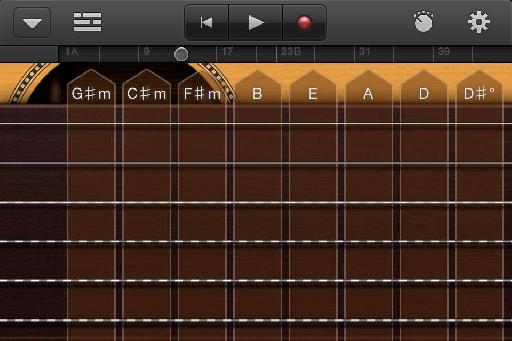 It's possible to set custom scales for the stringed instruments.

GarageBand on an iOS device smaller than an iPad seemed unlikely but it's a real triumph of engineering. It's intuitive, flexible and logically laid out and runs smoothly and without stuttering. Apple's design expertise has allowed them to really make this work beautifully and it's incredible how little you notice the smaller screen. As a musical sketchpad it's great, and you'll find making music and recordings on the move is a breeze. Thanks to the desktop integration, when you get back to your studio you can transfer the project over and keep working on it. All in all, a great little app.