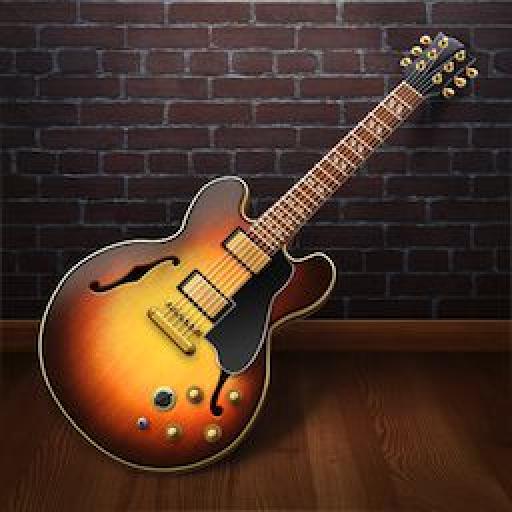 At the same event where Apple unveiled the new iPad they also announced an incremental update to the GarageBand app for iPad. A free update to those who already own the app, version 1.2 adds a new instrument, Smart Strings, a means of collaborating with up to 3 other GarageBand app players called Jam Session, and piano roll-style MIDI note editing.

The software designers have had a field day with this one, exploiting the now familiar interface used in other smart instruments to allow a wide range of string-based music making. Firstly, you can choose between Cinematic, Modern, Pop and Romantic styles using the Styles button at the top left. To the right of this are buttons representing the five instruments in a typical string section: 1st and 2nd violins, viola, cello and double bass. The buttons can be used to mute each instrument. 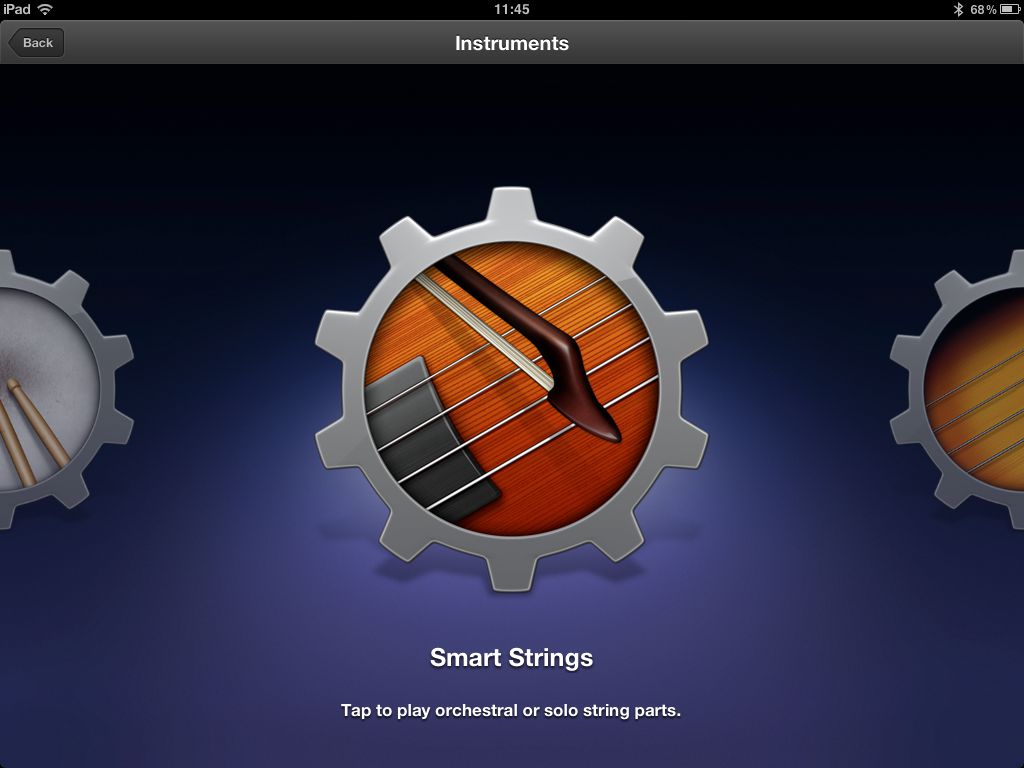 In record mode, with Autoplay off, you can play either pizzicato (plucked) or legato (smoothly, i.e. 'bowed'). To play pizzicato you will naturally tap a chord button in one of the four zones but then quickly realize that notes will only sound when you take your finger away, encouraging you to recreate the plucking motion of a real string player.

Each zone of each chord gives a different chord voicing which alternates between two variations. For legato you need to tap the record button and slide your finger up and down, effectively bowing the iPad. The faster you slide, the louder the note. Again there are four chord voicings per button depending on where you initially tap the chord. In each case the chord will only sound when you either remove your finger or start to slide, so you can prepare to play in advance by placing your finger in the right place. 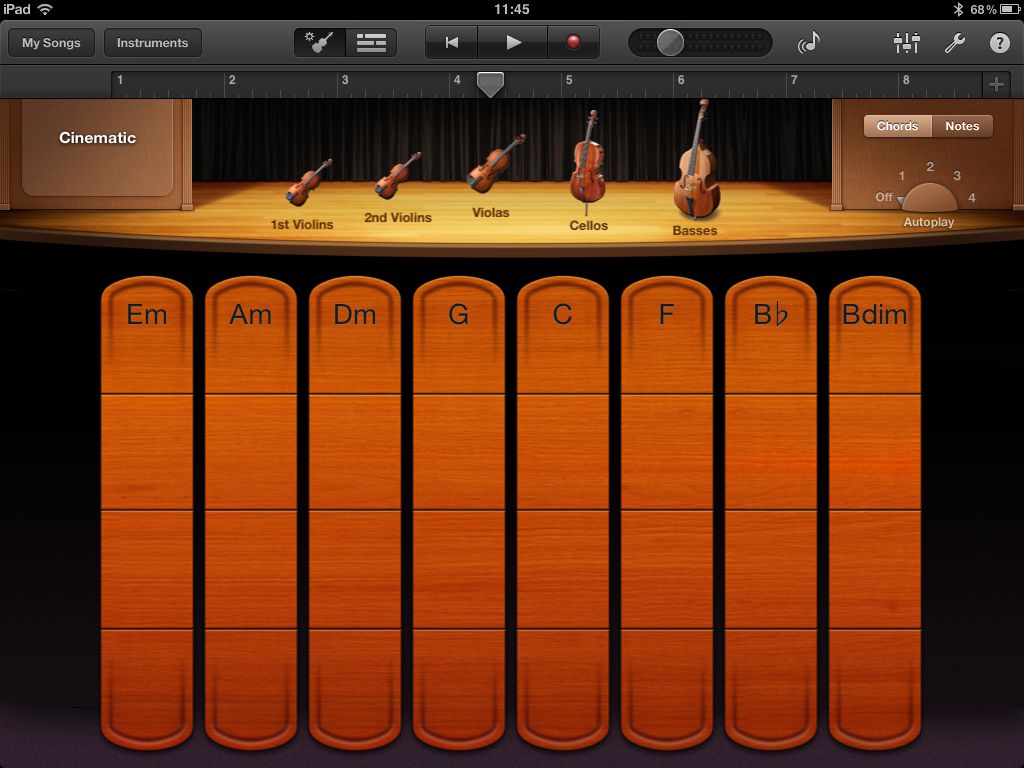 Autoplay mode offers four patterns for each style but these can be varied by muting individual instruments.

In Notes mode you are first offered the fingerboard of the cello: swipe the instrument selector at the top to change it. I was very quickly able to recreate the sound of a beginner's violin lesson due to the (obvious) lack of frets (alright...I'm a guitar player)! Luckily some pitch indicators have been provided (similar to the Tippex dots supplied by helpful violin teachers). Pizzicato can be achieved by holding the pizzicato button (by the nut) and tapping with the other hand. 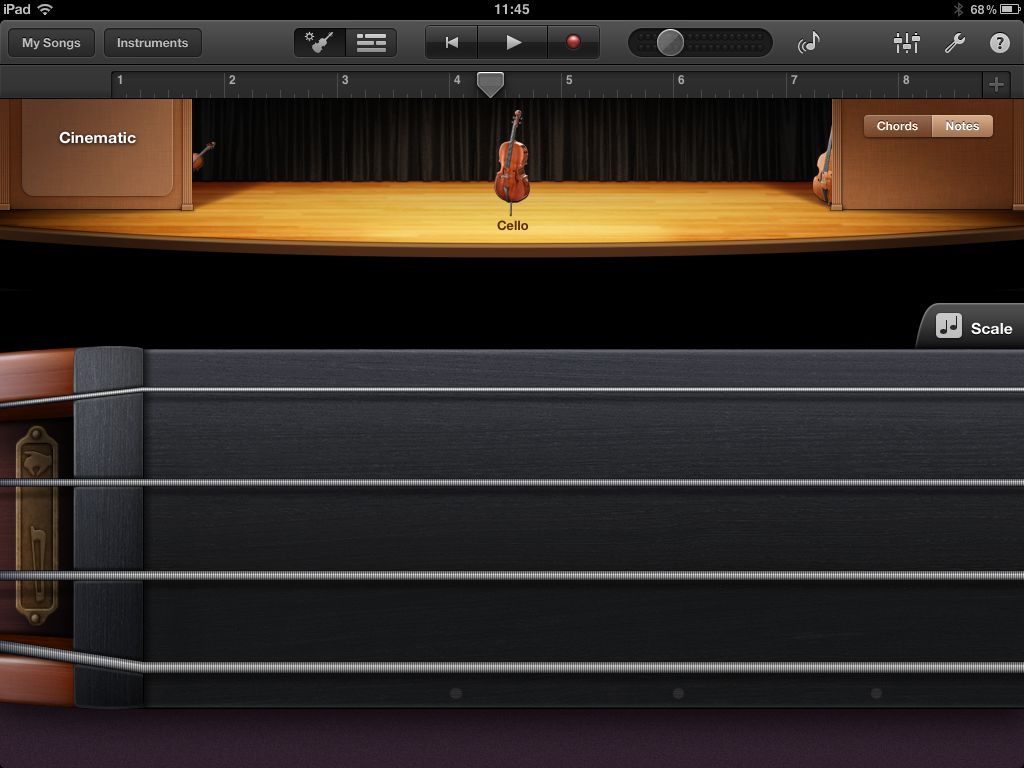 Thankfully, for those that don't like microtonality, a selection of preset scales can be accessed by tapping the Scale button and choosing one of the twelve presets. If I had one criticism it would be that I couldn't access the dusty end of the fingerboard. Aside from that, this instrument is so well designed, so intuitive, and capable of such realism that it would stand up as an app in its own right. 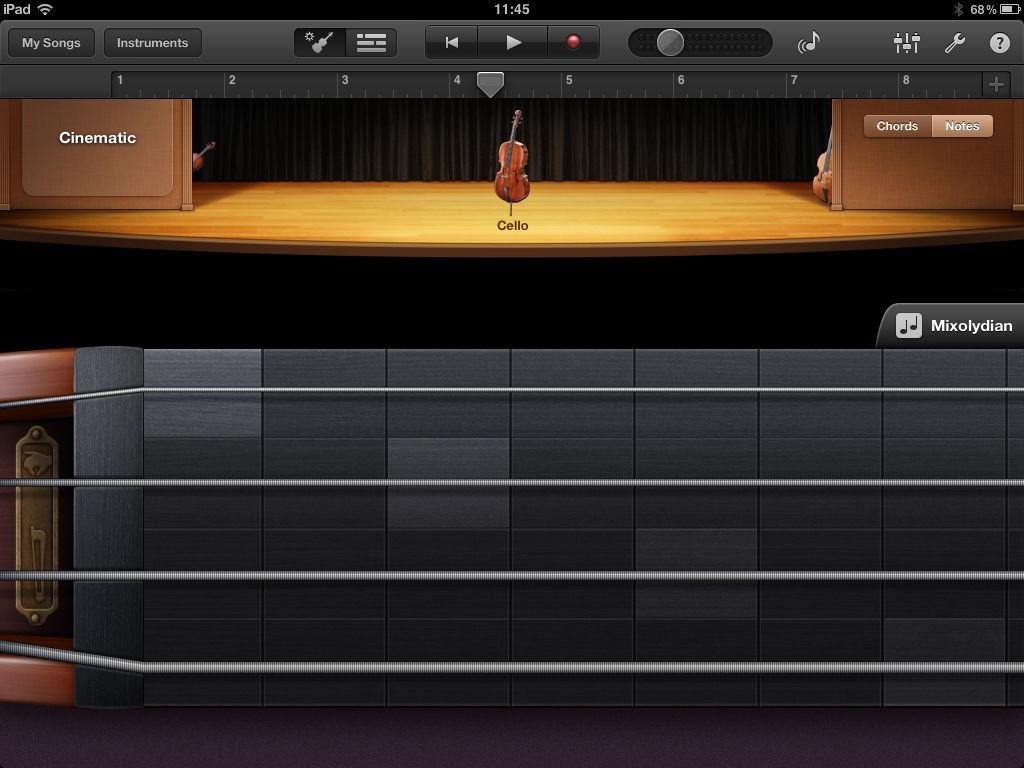 With Jam Session, Apple has chosen to eschew generic MIDI control (supported by many other apps but often baffling to implement) or the peer-to-peer WIST protocol offered by Korg, in favor of a proprietary system that allows up to four iPads to jam together with their performances being captured back to the master iPad—or Bandleader—as long as they are connected to the same wireless network. Where a wireless network is not available Jam Session will use Bluetooth. Ease of setup was obviously a key factor in design as setting up a session is as simple as tapping the Jam Session button. Whoever is the Bandleader taps 'Create Session', at which point participants are able to choose 'Join Session'. 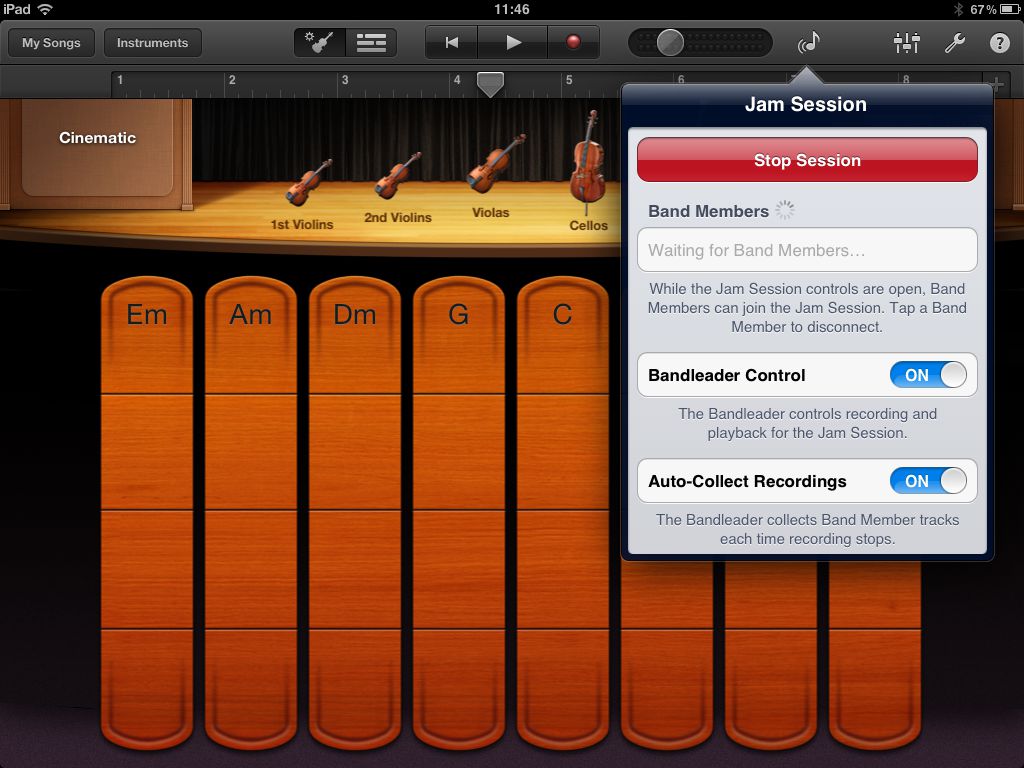 The Bandleader initiates the Jam Session 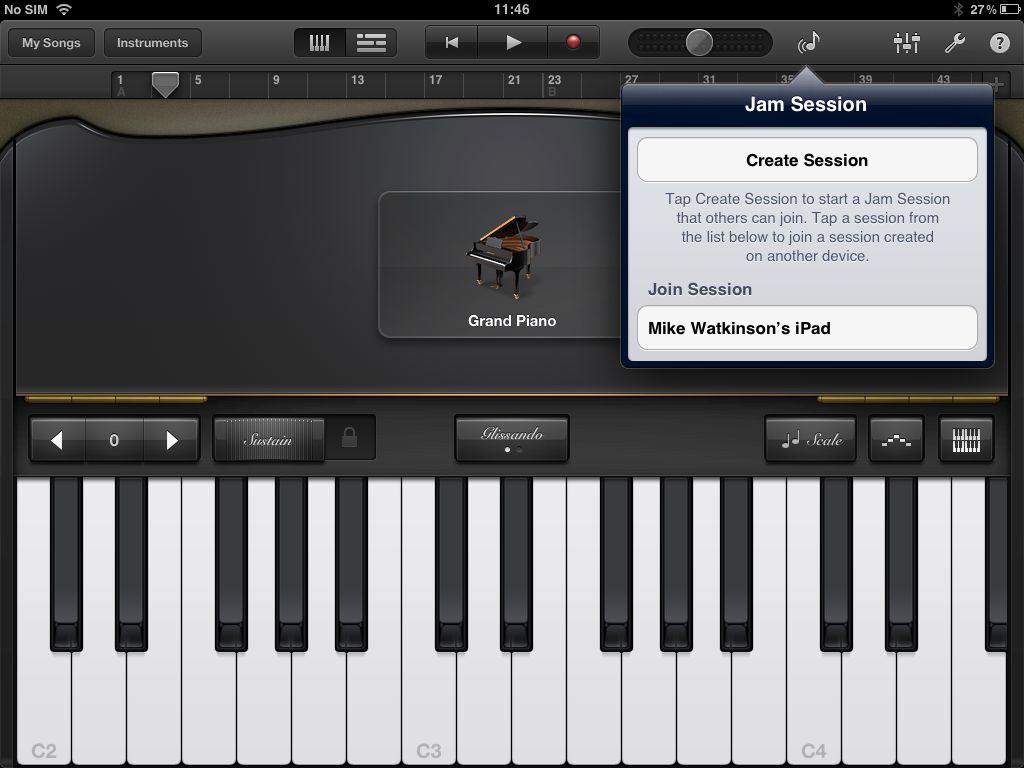 Jam session is limited to iPads running GarageBand version 1.2 but does make it incredibly easy for iPad musicians to collaborate, (or what we used to call 'join a band') and the 'Auto-Collect Recordings' feature is a massive step forward, avoiding the tedious copy and paste routine necessary between other apps. Jamming in a walled garden it may be, but Apple has realized that one of the best things about music is creating and playing it with other people; they have made this very easy to do.

One of the first things that hardcore DAW users complained about in the original version of the app (obviously expecting a lot more for their £2.99!) was the lack of MIDI editing. This has been fixed in version 1.2. Double tap a MIDI region and by choosing 'Edit' you open the piano roll style editor which has two modes: 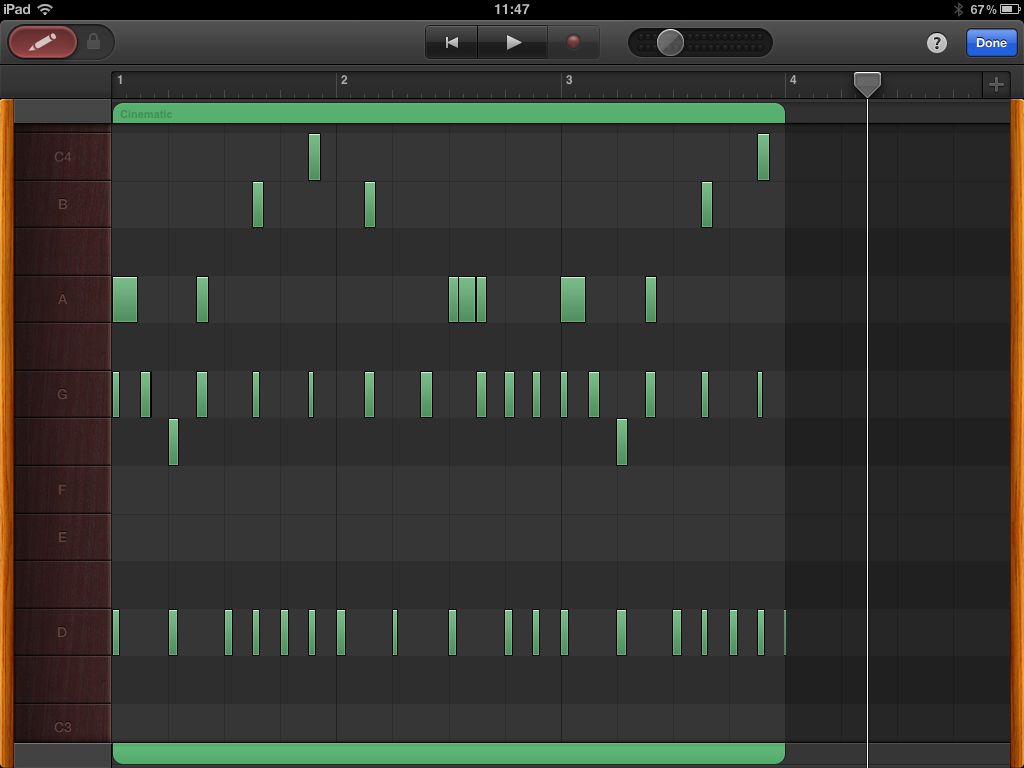 With the lock on you can select notes (by tap–dragging around them) and then either dragging the beginning of the selection to move them, or double tapping to choose further options. These include velocity, instrument choice and articulation, where supported by the instrument. A nice extra feature here is that if you tap then pause before dragging, the editor zooms in facilitating more careful note editing. Note length is of course much easier to edit when zoomed in especially for short notes.

With the lock off, you can tap to add notes, tap again to delete them, as well as edit note length, position and pitch.

Sharing has been improved in this version of GarageBand, adding options to share directly to SoundCloud, Facebook and YouTube, and if you own the iMovie app and update it to the version announced at the same time you can share soundtracks created in GarageBand directly to iMovie. 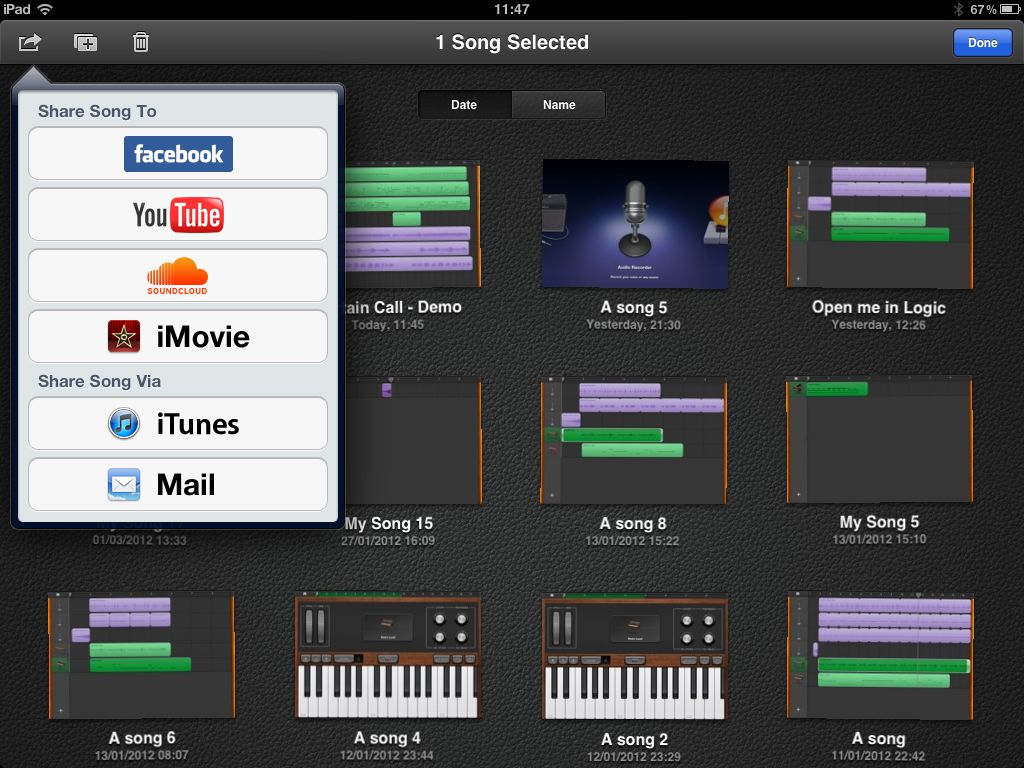 Yes...I need to give my songs better names!

Sharing GarageBand files back to GarageBand on the Mac requires you to update your Mac version to 6.0.5.

Before the update, if you ran out of tracks (a GarageBand project can have up to eight tracks) you would be obliged to share the project as an m4a file, email it to yourself, copy it from the email, then paste it into a new project. A little fiddly I 'm sure you will agree.

The update has added the ability to merge (or bounce) tracks inside the project. Double tap and hold a track header in Tracks view (if you just double tap GarageBand will switch to Instrument view), then use the buttons at the side to select which tracks you wish to merge together. When you tap the 'Merge' button a duplicate of the project will be created (so you can return to it for further editing if required), and the selected tracks will be merged onto an Audio Recorder track in a new version of the existing project, so you can carry on adding more tracks! Any  unselected tracks will not be merged, and will remain in the new version of the project. 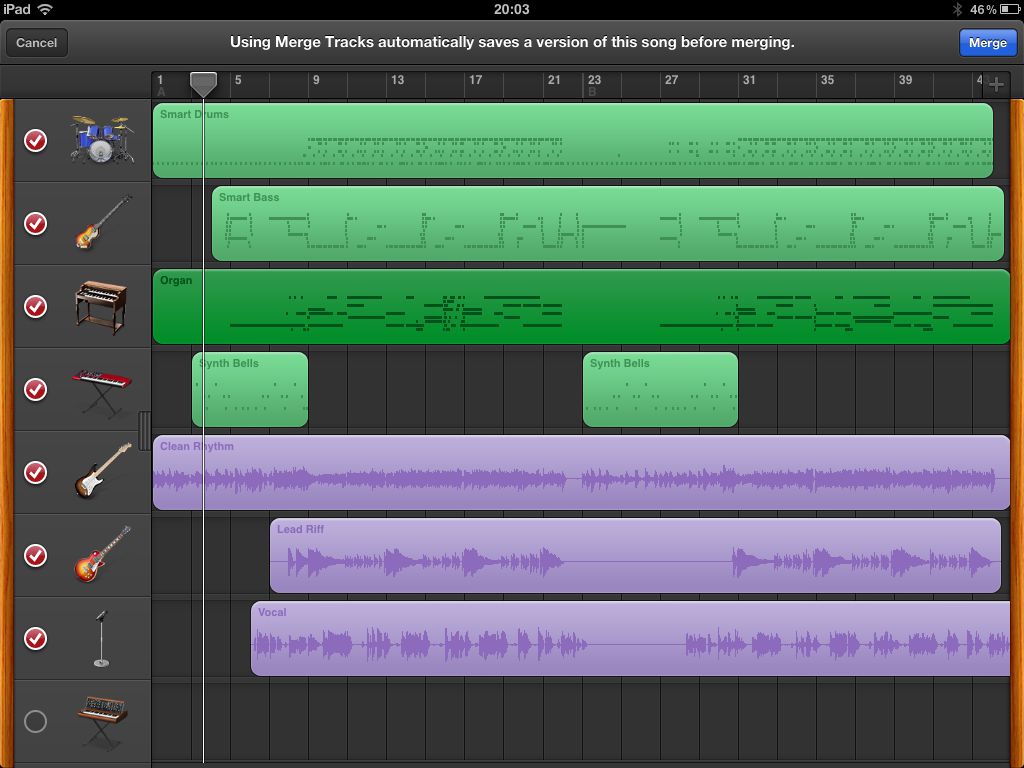 GarageBand can now merge tracks within the project. No more bouncing and re-importing!

Given that the Smart String instrument alone has so many features it could well be a standalone app, that Jam Session finally makes group music-making easy, and MIDI note editing adds a piece of the DAW jigsaw previously missing from the app, I would have been happy to pay money for each of these features, but the best DAW for iPad just got a whole lot better—for free!

fredwardo
How awesome is this! :)

Btw, I was able to create a jam session between my iPad 2 and my iPhone 4. Looks like it's not just for iPads.

Great article! Looking forward to taking advantage of all these new features.