FXpansion is well known for its mighty BFD drum instruments but also makes a range of other impressive synths, effects and music tools. Some years back, the London-based company produced Guru, a sample-based groove creation and manipulation tool, which later evolved into Geist, with greatly expanded capabilities. Now there’s a new version—Geist2—which takes things to a whole new level and incorporates many of the features from the company’s other software instruments and effects. There’s a lot to cover so let’s dive right in.

Running as a standalone application or as a plug-in on Mac or Windows, Geist2 has embraced the scalability that we’re seeing with an increasing number of software releases. That is to say the interface has been made vector-based which enables live resizing up to 4K and supports Retina displays, both of which are relatively common these days. With so much going on in the interface it’s nice to be able to take advantage of higher resolutions without having to keep restarting the app. In terms of workflow there are resizeable sections, the ability to show different editors and tools and a number of drop-down menus, but on the whole it’s well thought-out and you should find your way around pretty quickly. 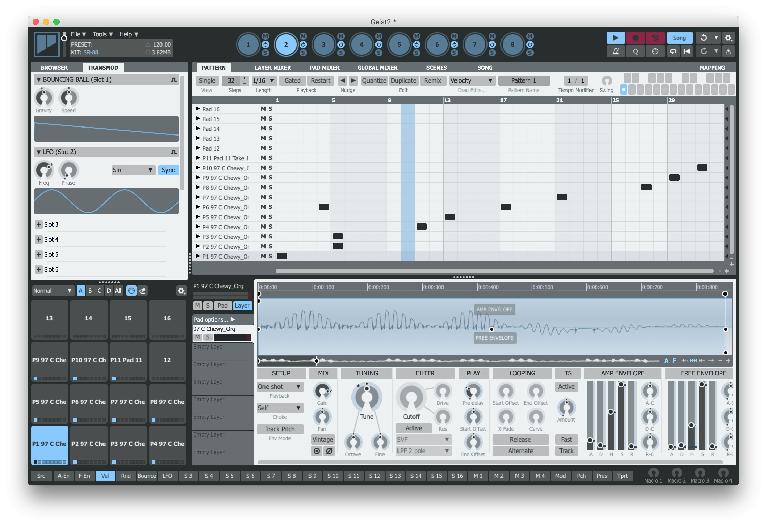 The new interface is fully scaleable in real time

A World of Sound

From the Browser on the left you can navigate to any folder and load loops, samples and ready-made kits, and there’s support for patches created in older versions of the software as well. There are eight engines, each one with 64 available pads, and each pad has eight available layers that can be mixed using its own layer mixer, complete with insert effects and sends. There’s a pad mixer section for each engine, and a global mixer section for the eight engines, four aux channels and finally a master mixer. Suffice it to say you’re not going to run out of either pad layering options or mixing capacity: it’s vast. One nice touch is that pads can have their layers triggered by velocity, round robin or randomization. So pressing a pad can alternate the samples it plays back, play them at random and so forth. 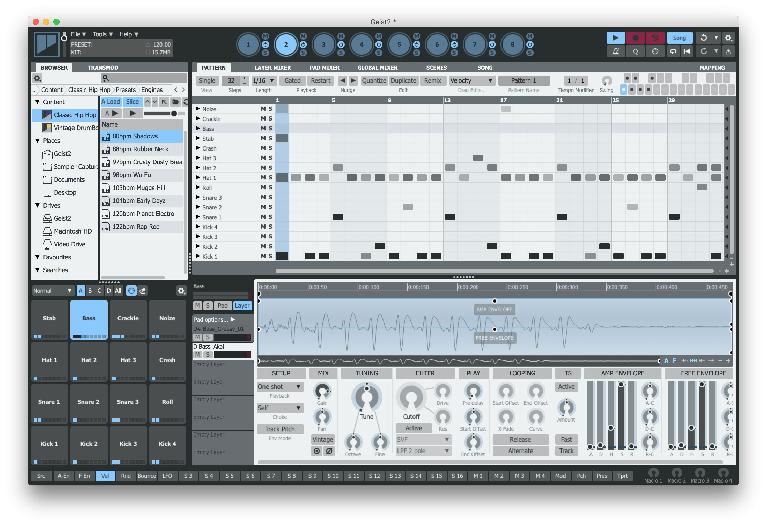 There are multiple pad input modes like Chromatic, Velocity or Sampler, which enables you to sample directly into a pad either from your audio hardware or internally within the instrument. Every sample inside Geist2 can be almost infinitely manipulated using the sample editor section with an extremely fine grained set of controls including envelopes, sample playback mode, mixing, filtering and tuning, looping and timestretching. Samples can be easily sliced (all the bundled loops are pre-sliced) and, of course, you can edit the slices, assign slices to different layers and manipulate sliced content. By default, sliced loops will adapt to fit whatever tempo and feel you’re currently using.

Next up is the sequencer, which uses an evolution of the clever technology seen in Tremor. Tracks can have different lengths so you are able to create “polyrhythmic” patterns where tracks can run at different durations. In addition, each track in the sequencer has its own subset of “graphs”: advanced programming automation tools that control the behavior of that individual track. These include parameters like probability, repeat, pitch, reverse, start point and many more and this enables you to get total control over programming patterns that go way beyond the usual beats and loops you can make in most sequencers.

At the more introductory end of things this can mean locating your hi-hat track for example, and dialing in some different probability settings to make the track play back in ways that sounds more human, varying the pattern without losing timing accuracy. More advanced users will be able to create totally unique and incredible patterns by manipulating these many parameters. There are even preset graph shapes you can choose to instantly make precise changes over time. 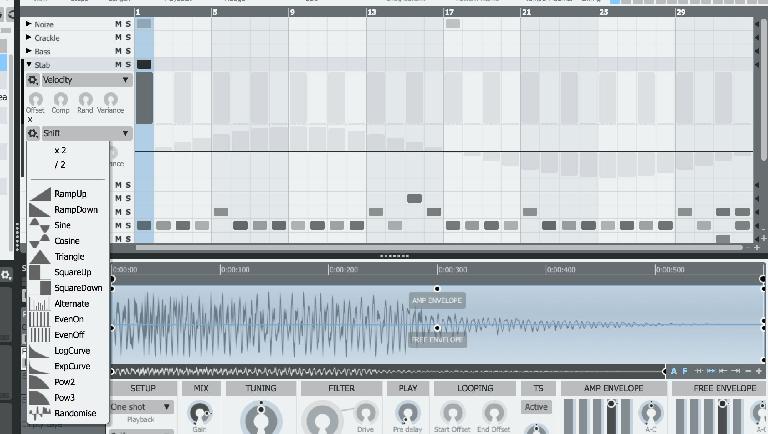 As if that wasn’t enough, FX has also included its powerful TransMod system, a means of creatively applying modulation to all kinds of parameters. The TransMod pane has 16 slots and each one can be assigned a type such as bouncing ball, LFO or even a mini sequencer. Each modulation type also has its own set of controls and is shown in the panel running along the base of the window. By selecting a slot and then moving the TransMod “wheel” around the outside of many parameter dials in the sample, layer and mixer sections you can assign dynamic modulation to multiple parameters easily. Additional mod sources like pitch wheel, amp and free envelopes are also available in the TransMod system.

TransMod is incredibly powerful, and a unique way of working with modulation. It enables you to animate or automate the behavior of effects and sounds within any layer, track or patch inside the instrument. Being so wide in its scope, you do have to keep track of what you’re assigning to where, or you can start to become a bit bewildered. That’s true of most modulation systems, but more so here due to the huge depth you can go into if you so choose. 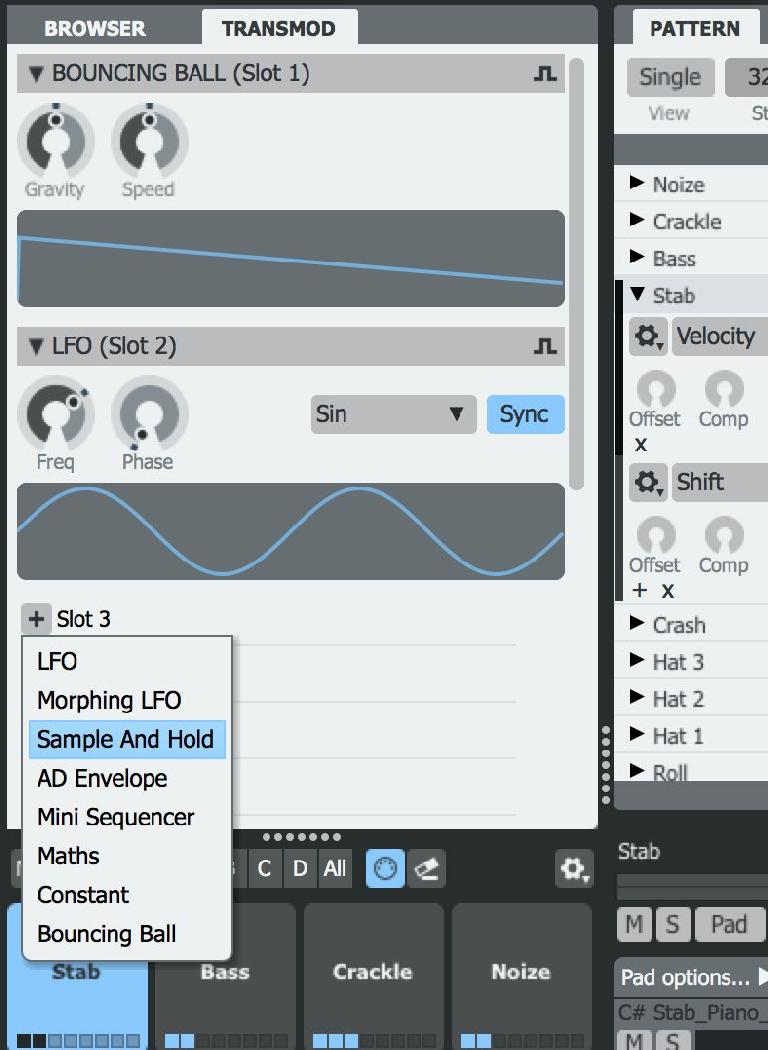 You get a bunch of cool effects which can be applied at multiple stages through the instrument, many derived from FXpansion’s other standalone effects plug-ins and covering a wide range of bases. These all have their own advanced control sections and tie in with TransMod, and effects presets are also available. In terms of actually composing you get a Scenes section that can be used for jamming with different sections of music, and a Song mode where you can arrange or live record whole performances and of course export audio from any section either as patterns, stems or whole songs as stereo files. There’s even a feature called “retro record” which I’d assume means that Geist is recording your performances much of the time, in case you do something cool but hadn’t pressed the Record button.

Loads of effects are available, including effect chain presets

Geist2 is a remarkably powerful music production tool. In fact there are many smaller features I simply haven’t had space to go into. But despite the incredible depth of features on offer for sampling, editing, manipulating, processing, sequencing and modulating audio, it still retains a core feeling of groove. It might look scientific—indeed, it is in some ways—but its heart is still that of a sampling groovebox and a cool instrument for making beats and patterns. For the amount of instrument (and content) you get the pricing is keen too, especially since it could conceivably become the center of your beat-making setup. There’s a demo available so I highly recommend you check it out.

Con: With great power comes the need—occasionally—to keep an eye on what you’re assigning where.