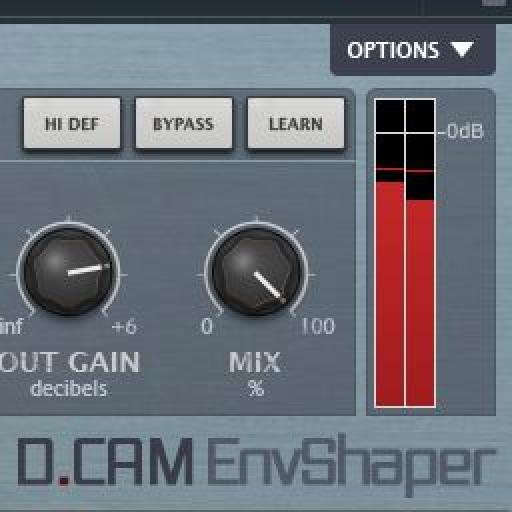 Language
MPVHub was fortunate enough to get hold of the first copy of FXpansion's new DCAM Dynamics pack. Find out why Hollin Jones finds this to be an excellent suite for the studio musician.

FXpansion is well know for its instruments but the company is increasingly moving towards developing effect plug-ins as well. Its latest release is DCAM Dynamics, a collection of four compression plug-ins, each with a different character and focus. Since compression is something that all productions use to some extent, it can be well worth investing in at least one third party model, as it can bring a different sound to your tracks that your DAW's standard compressor may not be able to provide. At $99 / £69 this collection is pretty easy on the pocket too, which always helps.

First up is DCAM BusComp, based on a classic hardware compressor from a well-known large format mixing console. Like the other plug-ins, its interface is clean and uncluttered, and easy to find your way around. All the compressors share a handy Options menu at the top right hand corner, a slick look and useful shortcuts like double-click to reset controls to zero, as well as right-click on variable controls like knobs and dials to manually enter a numerical value. This is great when you want to make very precise changes to a setting.

BusComp is intended to be mainly used on subgroups like drum mixes or across a project's master outputs to glue the sound together and lend it some extra coherence. FXpansion notes that it can also be used as a channel compressor if you like. It has a sidechain input option with an HP Frequency control that allows you to apply a variable high pass filter to the input signal being used for sidechaining; useful when it contains too much bottom end, to prevent the compressor reacting too intensely. External signal can be routed into inputs 3 and 4 of the plug-in and there's a Listen control to monitor it.

BusComp is a great general purpose compressor for subgroups or master outputs.

Beyond this, BusComp is a pretty straightforward compressor but does have a ratio control that goes up to 10.1 for more extreme effects, as well as in and out gain with a mix control, Envelope attack and release and makeup gain. Other notable features include a Saturate button which when activated enables the saturation circuit, with behavior dependent on the level of the input signal. There's a Hi Def option that puts the processing into 4x oversampling mode, up from its default 2x. This sounds even better but does use more CPU, though not a huge amount as far as I could tell. There's a VU meter for monitoring levels, and this can be switched between showing the compressor's output level and showing the amount of gain reduction. BusComp sounded great on drums when pushed hard, and also across the master buss when used more gently.

CrossComp allows you to base compression on specific frequencies, and shape the compression more precisely. There's an HP Frequency control as in BusComp, as well as a crossover frequency selection option and a pass through option, which lets you specify which part of the frequency spectrum is used; low, high, or the entire signal. In the Processor section you get a Knee control to manage the bandwidth of the compression circuit's knee, and Threshold, Ratio and Makeup controls. The display reacts quickly and gives you plenty of visual feedback about your levels and how the compression options are affecting the sound. 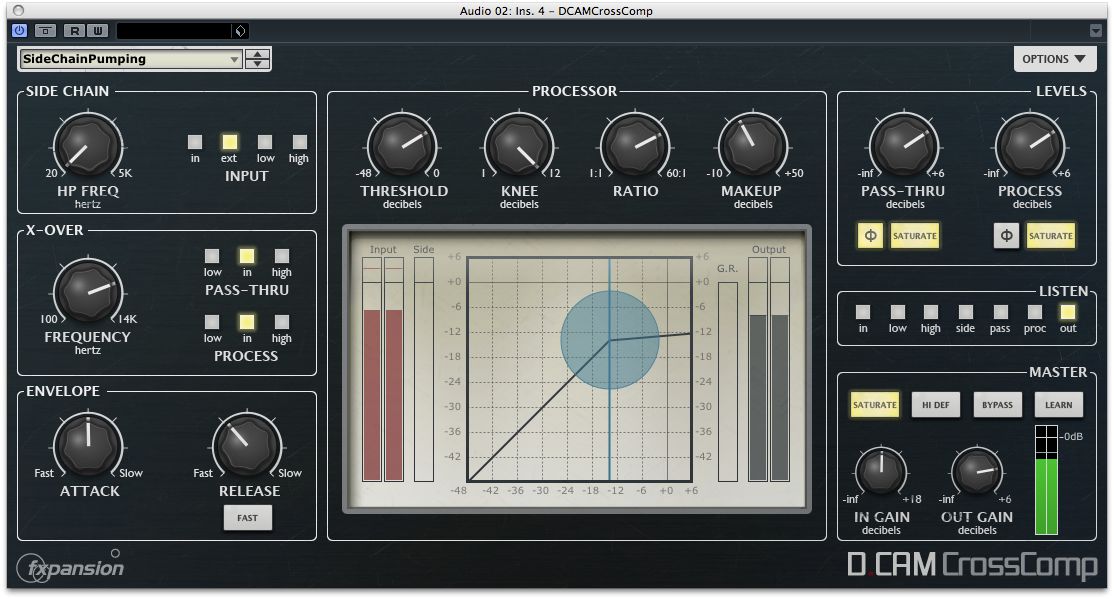 CrossComp lets you base your compression on frequencies, yet it's not a multiband compressor.

The idea behind CrossComp is that it lets you create frequency-dependent compression but without having to use a multiband compressor, which some people feel make things overcomplicated. It too has a Saturate option and also a Listen section that lets you choose whether to monitor any of the multiple stages of the plug-in; input, lows, highs, sidechain, passthrough, processed sound or the main output. Being able to do this is really useful for understanding the effect you are having on the sound and the relation between the input and output. There are also Process Band Phase Invert switches for greater flexibility. It's a more creative compressor, since it allows you to be very specific with the frequencies you use to compress signal.

DCAM ChanComp is a more conventional compressor and is intended to be applied to individual tracks in a project. In addition to the metering options found in BusComp, it has Ratio settings of 4, 8, 12 and 20 as well as a “Nuke” setting that emulates the “all buttons” ratio mode on classic limiting amps. When pressed, it causes limiting and distortion and can really crush your sounds. Another feature that sets this apart from the other models in the series is a Bias control, which continuously varies between different capacitor values used on the different hardware models on which the plug-in is based. You can set this anywhere from -25% to +25% to add subtle variations to the way the compression affects your sounds. 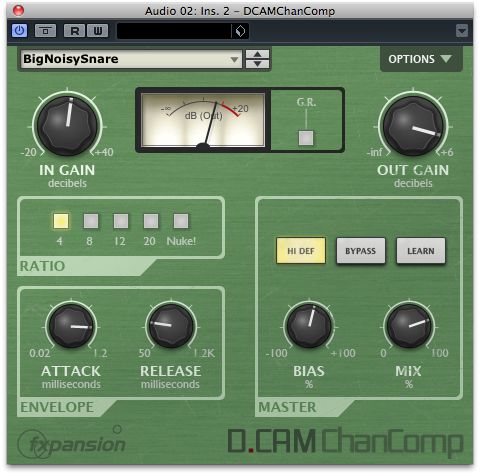 ChanComp is a straightforward compressor designed to be used
on individual tracks in your DAW projects.

Last but not least is the DCAM EnvShaper. This shares many of its onboard controls with BusComp and ChanComp, but differs in that it allows you to adjust the attack and sustain portions of transients to change the dynamic shape of a signal. It has a couple of unique features, such as the ability to select the left or right sides of the input signal or both to use for compression. Its Dynamics section also has a Signal Bias control that adjusts the sensitivity and release of the plug-in, so at low settings it's more sensitive to short transients and at higher ones, to long transients. You can use it to create choppy effects, as certain transients are heavily compressed, or to “lengthen” sounds, especially beats, as certain transients are compressed with different settings to others.

DCAM Dynamics is an excellent set of compression plug-ins, each with suitably different characteristics to make them all useful at different stages of the production process, but also with some shared controls so the learning curve is fairly gentle. You can achieve everything from gentle compression through to slammed, crushed effects, and everything in between. You may end up using some more than others: BusComp and ChanComp are likely to be your workhorse models, but the other two are more specialised and so will surely find a use in more delicate situations. A powerful plug-in collection at an attractive price!

Download a free trial or purchase DCAM Dynamics at FXpansion.com

BScherman
I've been consistently impressed by Fxpansion products, I use the channel and bus comp extensively within their Geist sampling plugin, and it's great to now be able to use those tools on other instruments.

They've even been kind enough to offer a Free Compressor (FreeComp) which works terrifically! For those interested you can get it at fxpansion.com by signing up for a free account.

Thanks for the great review. Brian