Language
Toby Pitman puts the Frederic Effects Zombie Kome overdrive. Boost guitar pedal to the test against the original, but rare, Klon Centaur pedal. Find out why he's pleased with himself.

Since production ceased in 2009 the Klon Centaur overdrive/boost pedal has reached near mythical status amongst guitarists. Such is the demand for this rare pedal that you can expect to pay in the region of $1500–$2000 for second hand one. Even the limited run 2012 reissued Klon KTR are near impossible to find.

Developed and handmade by Bill Finnegan, the Klon Centaur was really one of the first boutique pedals around. It was also probably the first pedal where the circuit boards were 'gooped' so it was hard to find out how the pedal actually worked. Eventually the pedals schematics were decoded and released and so followed a slew of 'Klones'.

I was recently curious to to try one and after some research settled with London-based boutique pedal maker Fredric Effects. Run by Tim Webster, Fredric Effects make a wide range of really nice handmade Fuzz and Overdrive pedals.

When it arrived I plugged it in and really liked what I heard. The thing was how did I know how close it was? I've never had a real Klon.

Curiously, a day after the pedal turned up I was chatting to a guitarist friend in the pub and told him about it. He said, ”Oh I've got a Klon, we should A/B them!”. So that's what we did!

Rob came up to the studio a couple of days later and we set up the pedals side by side. The Klon in question was a later Silver model (the earlier production runs were gold). There is a lot of debate (myth) as to which one is better although even Finnegan says they are the same pedal and no two Klons are perfectly identical anyway.

The Zombie Klone has the same Gain, Treble and Output controls as the Klon and come in a sturdy aluminum case. Specs are as the original with no True Bypass and a Buffered output. The Gain like the original Klon actually blends the overdrive into your clean signal as it increases. 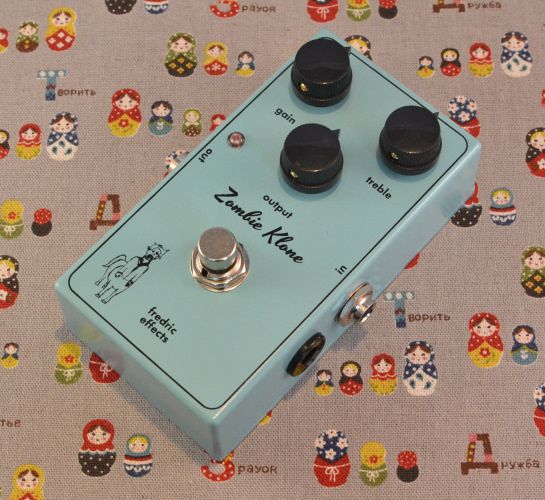 In terms of operation the only minor difference I could find was the Zombie Klone has a slightly different taper on the pots as you might expect and gets to the top slightly faster than the Klon. This required a slightly different 'backed off' setting to produce a similar core tone.

For testing we used a Mesa Boogie 5:25 miked with a Royer R-122 Ribbon Microphone. Guitar was a Thinline Tele with a set of Bare Knuckle 'The Boss' pickups. Because the output of both pedals is buffered, they were both recorded separately into the amp. The idea was to try and match the tone rather than compare the exact same settings. 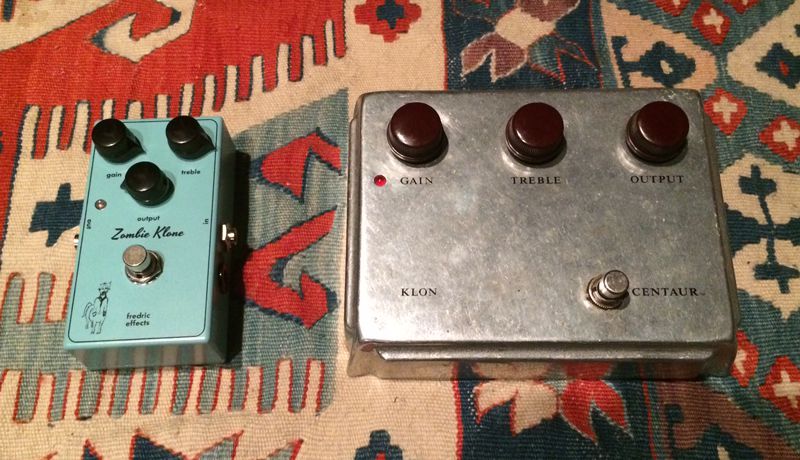 So how did they stack up? Well there isn't much in it at all! In fact we both looked at each other as if to say, “That's pretty darn close!”.

Here's a couple of examples. Same riff on the Klon followed by the Zombie Klone.

The first is a mid crunch tone.

The next is the both pedals with the Gain and Treble at full.

The final example is using both pedals as a clean boost on a slightly crunchy amp tone.

As you can hear there isn't much between them. After recording, I ran some EQ tests. The only critical tonal difference was a slight (2–3 dB) bump missing from the 'Klone' at about 120 Hz. The Klon has a slightly more pleasing sizzle in the high mids and adding 3–4 dB shelf at around 5 kHz to the Klone added back some of the high harmonic content missing from the Klone.

After EQ-ing the 'Klone' I couldn't really tell much of a difference at all.

If you're a total audiophile, you should spend the money on a secondhand Klon as I doubt you'll be pleased any other way. The 'Zombie Klone' comes in at about £100 sterling. For that kind of money, you get what I think are the core characteristics of the pedal.

There are of course loads of 'Klones' out there, and all are based on the same circuit diagrams as the Zombie which is a great little pedal.

I'm very happy with mine, and it's great for adding grit to rhythm guitar sounds. It isn't a full on distortion pedal and isn't meant to be but for crunch tones and boost it really does a great job. And it doesn't cost an arm and a leg!

oldschoolguitarist
It is a beautiful comparison for the vintage guitarist.For a newbie like me, MXR M- 133 Micro Amp/TC Electronic Mini Booster is relatively useful.