The Folktek Mescaline system is back on pre-order - let's take a deep dive into this unusual (and somewhat crazy) modular synth and sequencing system.

It doesn’t often happen that a synth gear company successfully closes a crowdfunding campaign. When the "Custom Electronic Instruments“ manufacturer Folktek announced the Mescaline in 2017, 425 users invested $205.920, crushing its Indiegogo funding goal by 1030 percent. These are numbers most other modular manufacturers only can dream of.

One of the reasons for the success can be found in the lush sounds that you can hear in the Folktek Mescaline intro video. It‘s definitely worth watching and will give you a good impression of the sound.

Folktek managed to deliver the Mescaline with just a month of delay , which is impressive for a small-ish manufacturer. After the first Folktek Mescaline systems were shipped, mostly positive videos were shared on the dedicated Facebook group. This group is still active and a valuable source for all things Mescaline.

After a longer gap in availability, the Mescaline is back for pre-order. So what do you get for your $700? First of all, three Eurorack-sized modules called "Mental,“ "Channel“, and "Motion.“ Also, the Folktek Mescaline comes with a steel frame that makes it feel like a nice desktop synth. Did we mention it looks like a piece of art? Alternatively, you can mount Mescaline’s modules in any Eurorack system, if you find enough space for three 44HP modules. We’ve come to prefer the stand though - it’s more ergonomic, giving you a better overview of the system. Oh, and the overall build quality is excellent.

You’ll also find a bunch of Dupont cables in the box - these tiny cables with their tinned ends are used to patch points on the board. For the Kickstarter edition, Folktek co-founder Arius Blaze also threw in a free code for his great album "Meditations in Jazz“ (not made with the Folktek Mescaline system, but still worth listening to).

As with any modular gear, patch points make the system come to life. The Folktek Mescaline has plenty of them - you can patch pretty much every aspect of the sound generators, but you can’t unfortunately automate the effects. Still, you can and should crosspatch all three modules with the DuPont cables.

Some patch points allow you to hook up the Folktek Mescaline to a Eurorack standard, for example for applying the internal effects, sharing the same clock or providing sequencer control voltage.

Here are two short examples using all the modules. Please note the effects channel is always on the right output, whereas the sound generators are always on the left output. In a standard studio situation, you would mix them to mono. 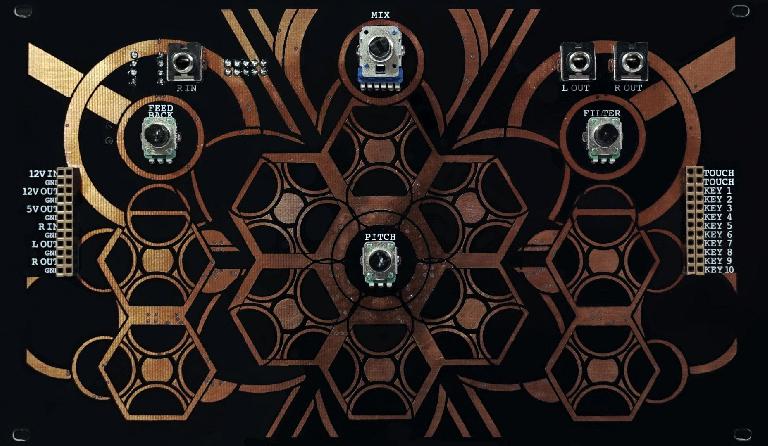 Channel is a 10-note polyphonic synth. You can play it either by touching up to 10 touch plates, by sequencing it through Folktek Mescaline’s Motion, or any external CV source. The sound source is a warm analog pulse wave.

If you‘re planning to play Channel with via the touch pads, you should calibrate Channel before mounting it into your Eurorack. Be prepared for the fact that Channel has a significant amount of Attack and Decay already pre-dialed into its amplitude envelope. So you definitely won’t play Bach on it, but it‘s great for pads, chords and slow melodies. Without added modulation, the pitch ranges from 20 to 2600 Hz (roughly).

If you want to leave the traditional scales, you can alter the pitches of each touch-plate on the back of the module. Channel also houses the effect section, which can be controlled by a wet/dry mix, feedback, and a non-resonant filter. You can route external signals into it, making the Mescaline an additional effects processor. There are four algorithms available:

Last but not least, you can process all internal or externals sound with a Vactrol filter circuit on Channel, which turns out to be a great addition to Mental (which we’ll cover in a minute) or external sound sources. 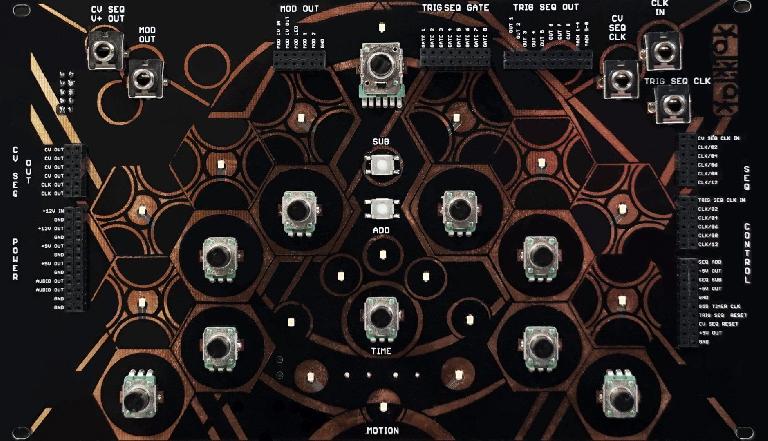 Motion is the motor of the Folktek Mescaline. It consists of two independent sequencers; one for trigger events, the other one for control voltages. Both sequencers hold up to 8 steps.

That doesn’t sound much at first, but fortunately, the Folktek Mescaline has some tricks up its sleeve. Both sequencers play not just one note but up to 8 events - so you make things interesting by firing events by on several steps.

Also with a few patch cables, things get even more interesting as you can clock the two sequencers by divisions (1,2,4,6,8,12, and 16). Finally, you can use control voltage to add or subtract events in both sequencers. There‘s a Mod option too which can be used as an patchable LFO, and you can sync Motion to external gear via an external clock.

Here you can hear the sequencers getting triggering Mental and Channel. 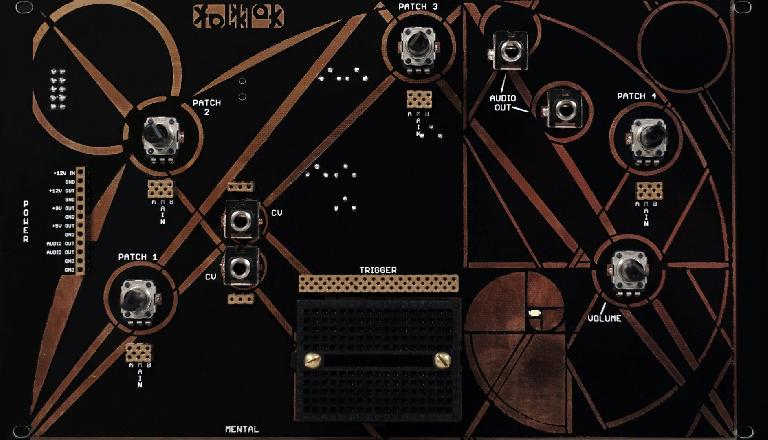 If you’ve never played with an instrument like the Folktek Mescaline before, you might be a bit overwhelmed by a module like Mental. Based on the roots of the Folktek instruments Materia, Mentalis and Matter, it comes with a micro patch-bay, which you populate with trigger impulses from Motion.

The main component of Mental is its patchbay. You have 16x4 patch points available, which can lead to interesting rhythmic variations. Mental also offers four potentiometers, where you can mix incoming control voltage. They might alter the sound in pitch or envelope. You can even extend the capabilities of Mental by adding a breadboard populated with resistors, LEDs, capacitors, and ICs of your choice.

Here‘s a sound example of Mental going mental (pun intended). Of course, these drone sounds can be changed to shorter, clicky sounds by adjusting the potentiometers in the back of the module.

The best thing about the Folktek Mescaline is that it feels and plays like a real instrument. With its infinite reverb, Channel is capable of producing soft and sweet melodies or pads. Mental is capable of giving you highly unusual clicky rhythms or massive noise drones. Motion will make sure the rhythmical variations won’t ever run out.

And it really can develop life on its own. Together with a piano, some modules or even a classical guitar, it can become an album. But rest assured, Mescaline is not a beginner’s instrument. The manual is great, but the writing is so condensed that even modular experts have to look things up.

Also, the machine doesn’t fit into any particular modular "school“ - it’s neither east nor west nor 0-coast. The Folktek Mescaline is really a class of its own, closer related to Folktek's electroacoustic creations like the Illuminist Garden than to any other synth.

But there are some drawbacks. The Folktek Mescaline can behave like a diva. Repeatability isn’t its forte: tweak a knob and that great sound is gone forever. Also, noise, hum, and bleed-through levels are considerable. You can even alter sounds by touching wires with your fingers. This doesn‘t have to be a bad thing per se, but definitely do not expect "Hi-Fi“ sounds.

Powering the system through the bundled PSU can result in power fluctuations. This means audio levels will vary. To get the best results, invest in three PSUs or mount the system into your rack. I found it nearly impossible to tune Channel properly without going at least +- 5 cent off, if you play it through the touchpads. This really depends on your skin resistance, the settings at the back of the module and even the moisture level in the room. Getting the perfect pitch on Channel depends on many interdependent factors, so staying exactly in tune is difficult. Also, programming Mental is like playing the lottery - sometimes it‘s a dud, sometimes a hit.

If you are willing to take these chances, you’ll get a deep, versatile and fascinating instrument. For me, it has the same approach as the Buchla Music Easel; a limited machine that’s capable of surprising you constantly. Arius Blaze is known for not making any compromises. With Mescaline, this approach pays off. The Folktek Mescaline doesn’t sound like any other three-module combo out there in Euroland.

Pros: Great standalone system capable of a variety of soothing, drony, clickey, or even brutally distorted sounds. Lots and lots of character. Mental gives you that instant circuit bent feeling. A visual piece of art.

Learn more about modular synthesis in the Ask.Audio Academy: https://ask.audio/academy?nleloc=category/audio/topic/synthesis 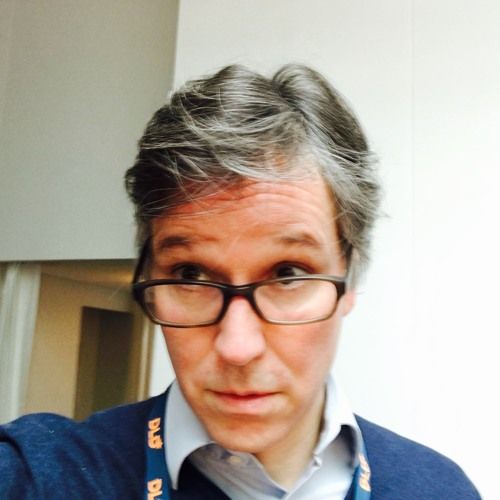 Munich-based journalist Anatol Locker loves music and technology. If heâ€™s not writing for German or US websites and magazines, he can be found playing improvised electronica gigs with Ambiosonics and Spheric Lounge; tweaking knobs at the Indietronic band MOC; or contributing to the Disquiet Junto project. His latest project is Lucid ... Read More