Focusrite's latest professional audio interface is chock full of functionality and features like audio over IP, Pro Tools HD interfacing, Thunderbolt 2 and much more. We put it to the test'¦

Focusrite’s gear has been a mainstay of professional studios since long before I started producing music in the mid 1990s. As time has gone on, the company has stayed at the cutting edge of technology and the new Red 8Pre interface represents the very latest in studio connectivity. Let’s get something out of the way: this is a serious interface and has a price tag to match. Realistically, it’s aimed at those who need a hefty amount of I/O, perhaps the ability to switch between Pro Tools HD and other DAWs with the press of a button, and other higher end functonality like audio over LAN. That’s not to say it wouldn’t be an amazing interface for just about anyone to use, but its price bracket is in line with other heavyweight interface gear.

There’s so much to cover in terms of functionality, so let’s start with the rear panel. You get dual Thunderbolt 2 ports, a protocol that does seem finally to be well established for more advanced audio and video gear. In addition there are two mini-DigiLink ports for connection to Pro Tools HD systems, these being Avid’s proprietary cables. Helpfully, it’s possible to switch between a DAW that uses CoreAudio (which is virtually all of them) and Pro Tools by using Host Mode, retaining your connections.

So you could use it on the road with Logic, then back in the studio with Pro Tools HD. Pro Tools will treat it just like an Avid interface and it can be used alongside those as well. Thunderbolt and mini-DigiLink come as standard so there’s no need to add a separate card. Note also that there’s no Windows support for the interface at present.

There’s S/PDIF in and out, stereo monitor outputs, serial ports for mic inputs 1-8, line inputs 1-16 and line outs 3-18. There are 16 optical audio ins and outs split between 4 ports, word clock and loop sync I/O and last but not least, dual ethernet ports. Focusrite makes the RedNet audio-over-IP system and the Red 8Pre inherits some of its talents: 32 channels of Dante inputs can be used to connect compatible gear via ethernet. This is very welcome since ethernet has huge bandwidth for carrying high quality audio streams. The total I/O count for the unit is 64. 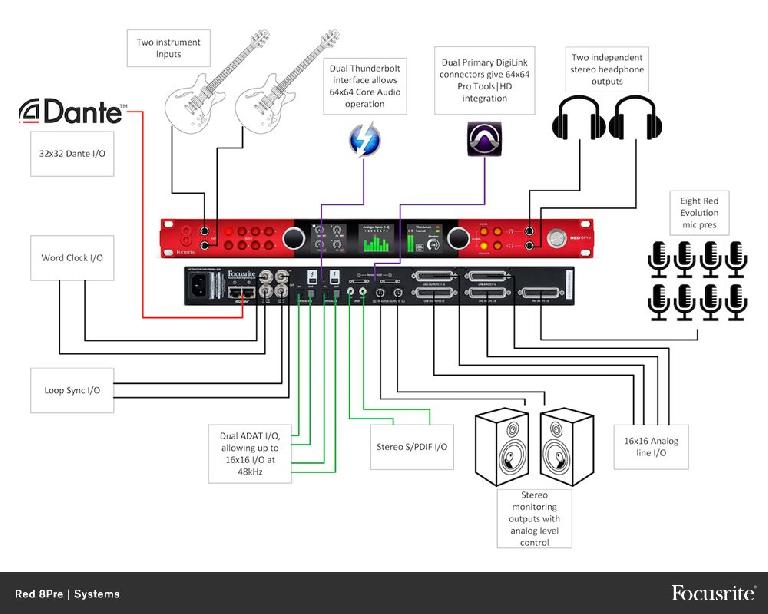 The front panel truly is a thing of beauty, and not just because of the distinctive red livery. Build quality is fantastic and there are three slick, accurate backlit colour LCD screens to let you monitor levels and other parameters. Simple and uncluttered, these are far better than the LED systems found on many interfaces – though again I should qualify that by noting that this is a professionally spec’d unit. It’s also surprisingly accessible, with two instrument inputs on the left and eight channel select buttons. Two level knobs are smooth and accurate, and buttons let you switch between display modes. Dual headphone ports are available and there’s a level knob for these as well. 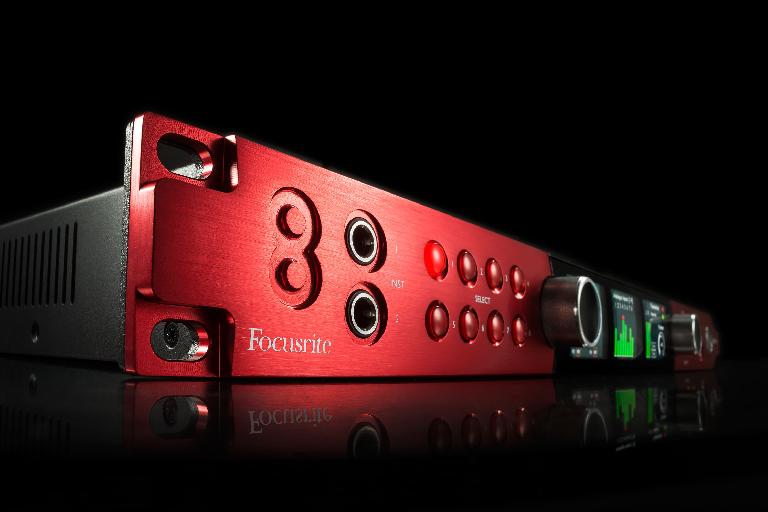 A lot of the really clever stuff happens away from the outside of the box. For starters it uses eight Red Evolution mic pres, digitally controlled to deliver a very clear sound with minimal noise and plenty of gain. These can be controlled manually or remotely over Thunderbolt using the Focusrite Control software (of which more in a moment). Mic pre settings can even be stored and recalled, meaning easy loading of whole setups. They use Focusrite’s “Air” effect which lowers impedance to give the sound a subtle high-mid analog boost. With a dynamic range of 118dB A-D and 121dB D-A and a flat response to 35kHz, they use “parallel path summing” to achieve lower noise performance. Latency is very impresive too, with an analogue round trip figure of just 1.67ms at 32 samples. 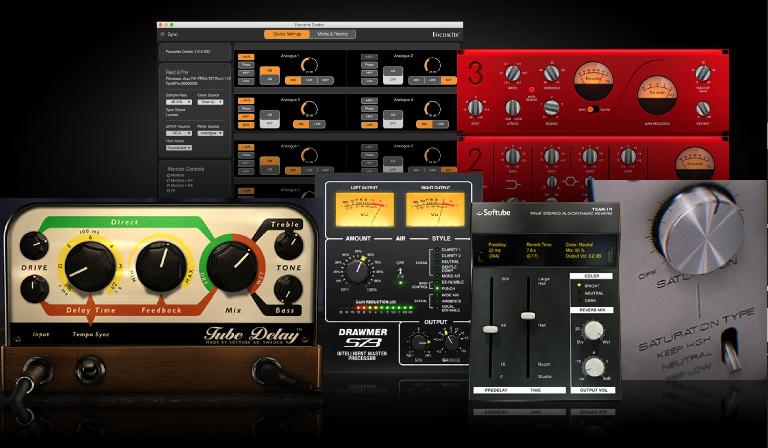 It’s only a 1U rack but as you might expect with such advanced connectivity, computer control is also available in the form of the Focusrite Control software for Mac. This is fundamentally a way to access, tweak, store and load different settings and setup for the hardware, and it’s nicely implemented, opting for a slick and minimalist design rather than emulating some kind of hardware look. As well as controlling the mic pres you can recall settings, assign stereo pairs, adjust gain and enable features such as highpass filtering and phantom power from the software. It also lets you do things like assigning any physical input or output to any driver or PTHD channel, meaning you can customise the routing extensively. You’re not limited to using the layout as it comes out of the box. 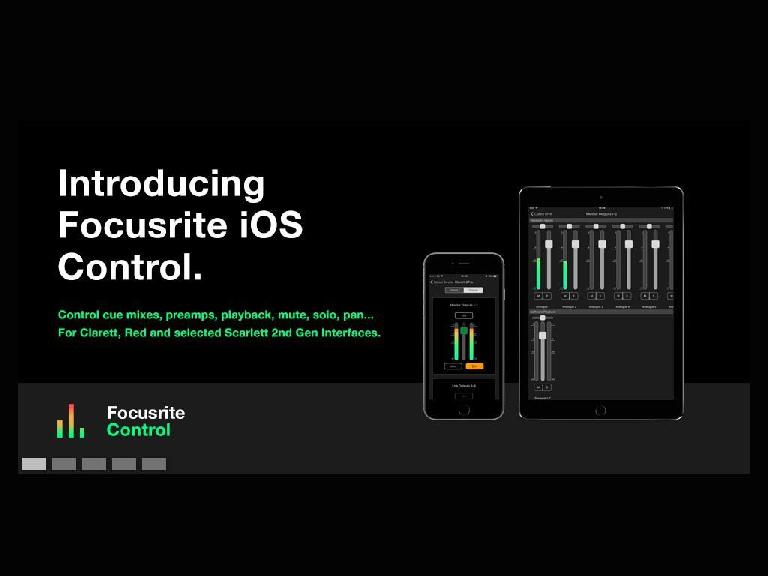 There’s also a free Focusrite Control for iOS app that runs on iPad and iPhone, which you can use to adjust cue mixes and preamp settings. This is a really nice touch, since not only are you not tied to the interface, it also frees you from your Mac. As well as all the hardware features, Focusrite throws in a pretty generous software bundle comprising Softube's Time and Tone Bundle (a plug-in pack including four of Softube’s professional quality plug-ins: Drawmer S73 Intelligent Master Processor, TSAR-1R Reverb, Tube Delay and Saturation Knob), plus the Focusrite Red Plug-in Suite, which accurately models Focusrite’s classic Red range 2 and 3 equaliser and compressor hardware.

The Red 8Pre is a fantastically well engineered audio interface with an excellent range of I/O, intuitive workflow and a crystal clear sound. Latency is extremely low and the preamps are loud with low noise even for sources that need a lot of gain, and being able to alter them remotely is great. Hugely flexible, features like Host Mode mean seamless switching between CoreAudio DAWs and Pro Tools HD systems and the free allocation of channels between physical and software locations.

Even if you are only using one of those two protocols, the same feature set essentially remains available to you, so it’s not like you’re paying for Pro Tools HD features that you can’t use if you don’t have Pro Tools. Audio over IP is another feature that professional studios will welcome. This is a serious interface that could easily become the heart of your studio.

Cons: No Windows support at present. Priced for serious users.