Language
When it comes to editing audio, there's times you'll want to manipulate the transients of the waveform to make the overall sound either more or less present. Flux Bittersweet V3 does that for free!

Transient manipulation isn’t the sexiest thing we talk about in music technology, but it’s a really useful thing to know about because it gives you a unique way to process sounds. Unlike compression or EQ, transient design lets you increase or decrease the prominence of transient peaks within a waveform while leaving the rest of the sound largely unaffected, at least when using moderate settings. If you look at a waveform with lots of transient peaks like a hi-hat or a strummed acoustic guitar (as opposed to, say, a synth pad), you can easily see the parts of the sound that are prominent. Transient design works by either reducing or accentuating these peaks and thus making a sound less or more upfront, respectively.

Why Mess with Transients?

The reason this is useful is that it lets you make a sound cut through the mix more but without necessarily greatly increasing its volume or applying a narrow EQ curve to it. So it doesn’t have to mess with the mix but at the same time it can subtly—or greatly—increase the prominence of certain sounds. A typical use for it is to make attacking sounds like drums or guitars clearer in the mix. Often it’s used quite subtly. Alternatively, if a sound is cutting through the mix a little too much and you don’t want to drop its level but you do need to make it less prominent, you can use a transient designer to reduce the impact of the transients. Think of it as taking the edge off the sound without using EQ, which can have the negative side effect of muffling it too much. BitterSweet V3 from Flux is a free plug-in that comes in all major formats. At its simplest you turn the large dial to the left (sweet) to decrease the amplitude of the transients, making them less prominent. Turned to the right (bitter) it increases the amplitude, making them sharper. In addition there are three transient selection modes which affect the sensitivity of transient detection. It’s M/S compatible so when the Main position is selected, you’re affecting the stereo signal. When you select Center, only the middle signal of the internal M/S matrix gets processed. If you select the Stereo option, only the S signal is affected which is good for working with panned sounds. You even get OSC compatibility so it’s possible to remotely control plug-in parameters using OSC-enabled apps running on touch devices like iPads or iPhones. 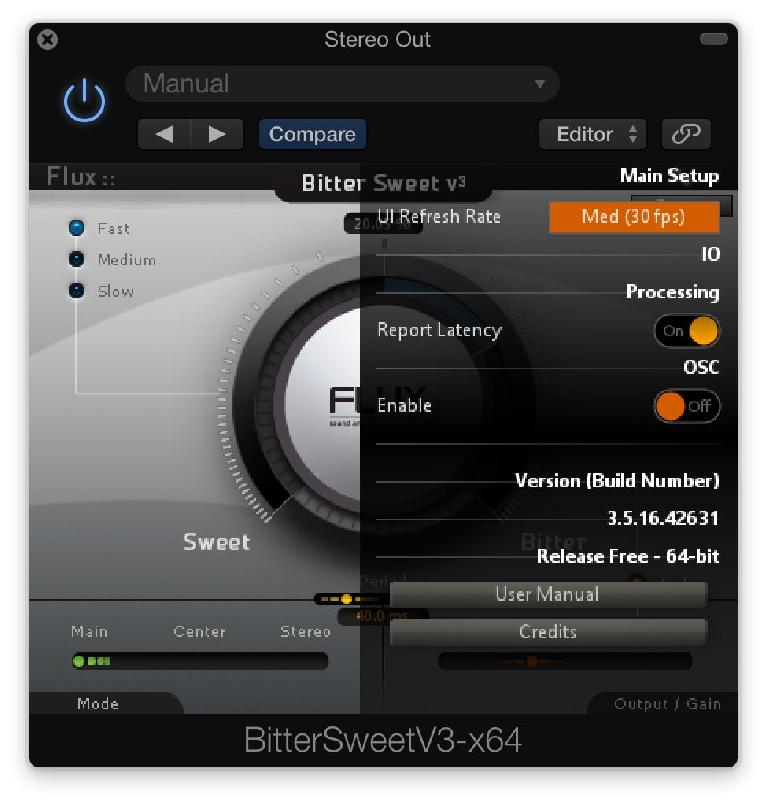 BitterSweet does a great job of handling the transients in any sound and in my tests it was able to accurately work with amplitude of sounds like drum tracks to shape them subtly, either to accentuate or soften them without fundamentally changing the level of the drums in the mix too much. Considering that it’s free, it’s a no-brainer to download this plug-in today and get better control over your mixes!

Pro: Great for working with transients. Increase or decrease prominence of transient sounds without messing up your mix. More accurate than EQ or compression for certain tasks. Free!