Language
Looking for easy to use, reliable DJ software? Mixed in Key think they have the answer with "Flow". Sara Simms is on hand to give it a spin in this review.

Flow is the latest software from Mixed in Key, the company who created the award-winning software of the same name. Flow is Mixed in Key's first professional DJ performance software. As a big fan of Mixed in Key products, I was excited to try out their newest program. Flow has integrated their software with Mixed in Key's harmonic mixing technology, making it easy to create perfect mixes.

When I opened the software, I was instantly impressed with the layout and quality of the GUI. Flow has a simple yet effective design, which is right on point with all the rest of the MIK products. When you first launch the software, the first screen allows to choose between Preparation, Play and Export. 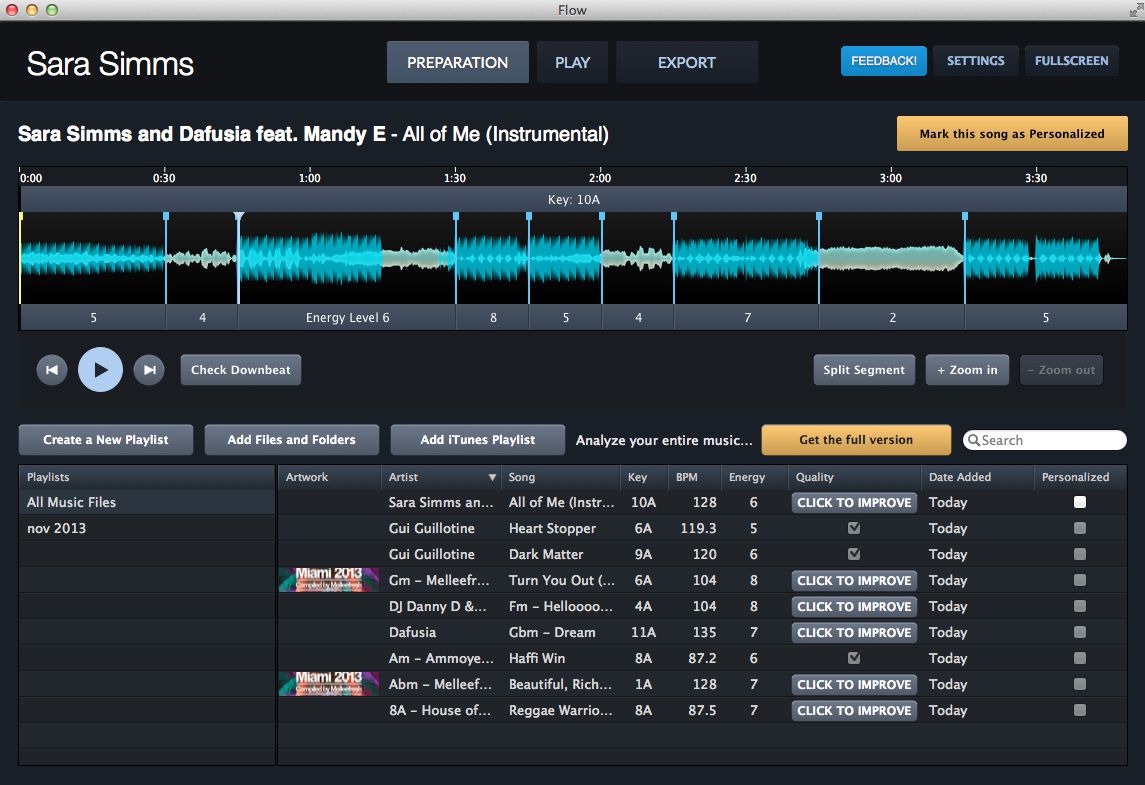 The preparation screen is where you add your tracks, either from your collection or from an iTunes playlist. Flow analyzes your tracks, and displays the song's key (using the Camelot Sound numeric system), the BPM, and the Energy Level of each track (the Energy Level is a rating of how energetic each track is, with downtempo beats being a '1' and banging hard house cuts being a '10'). You can also check the downbeat (this is the first beat the song starts on) in the Preparation screen. Flow uses the downbeat set on the tracks as the starting point for playing songs so you'll want to be sure this is set correctly.

As an added bonus in the Preparation screen, you can type your DJ name into the software, which gives it a personalized look and feel. 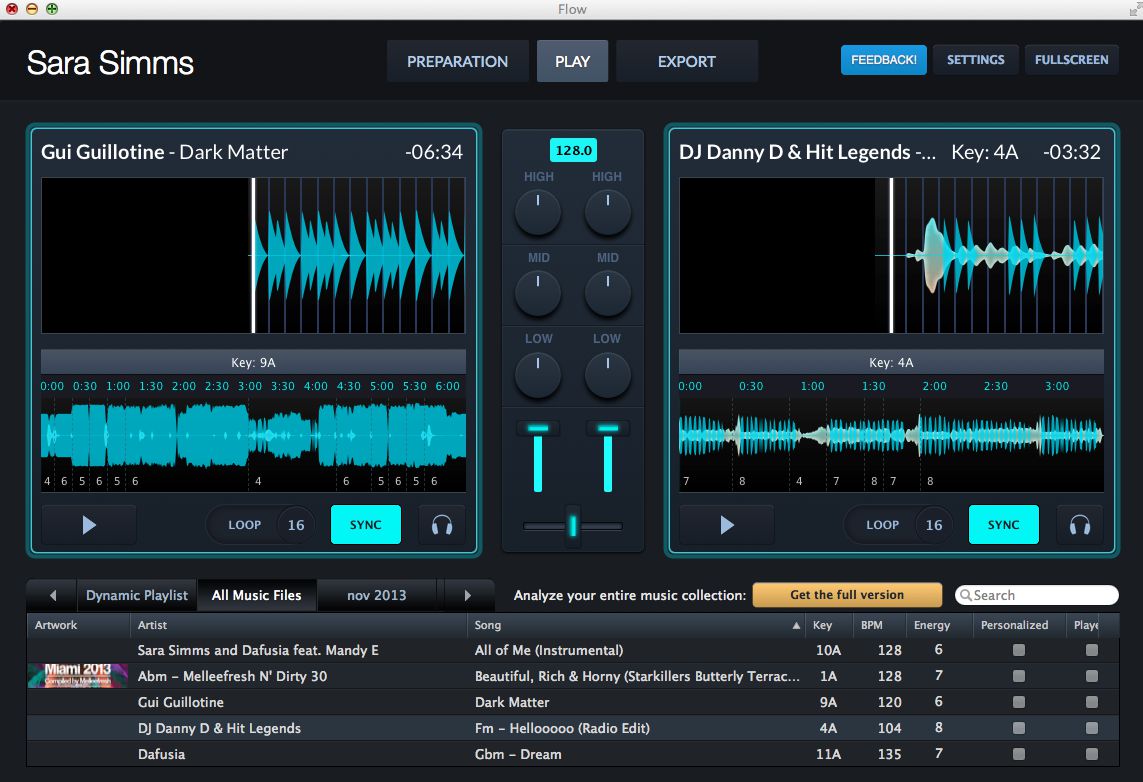 The Play screen is where DJs will likely spend most of their time. On either side, you'll see a waveform display of the tracks; directly underneath is the unique Segment section. Flow divides each track into Segments, which allow you to jump from one section of the song to another and remix your tracks live. This feature is quite innovative and is an easy-to-use alternative to cue points. Each Segment is also marked with the Energy Level, which makes choosing the next section to play a little easier. Songs are divided into Segments when they are analyzed, but you can create or delete Segments to customize your tracks. 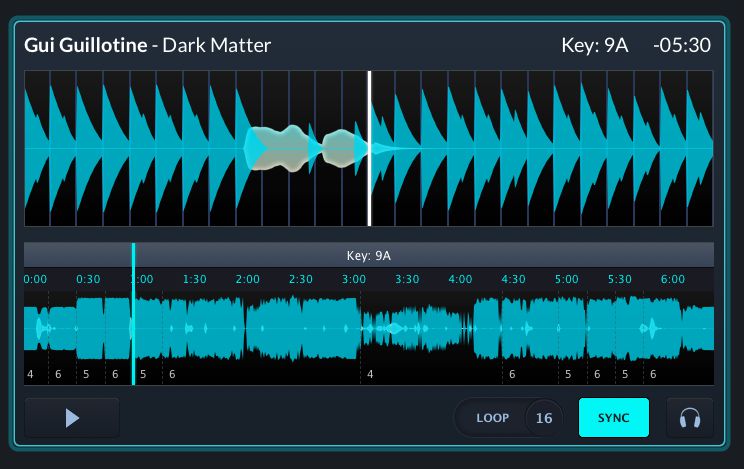 There's also a looping feature, a Sync button (which is automatically turned on) and a headphone cue listening button. When put to the test, the Sync feature was really accurate; I was happy there were no grids that had to be placed in order for this important feature to work properly.

In the middle of the software is a mini-DJ mixer, complete with three band EQ, two channel faders and a cross-fader. You can either mix directly in the software, or map each of the software's features to a MIDI controller.

I think that Flow's real potential can be unlocked by creating MIDI mappings, and using it together with a controller. In the MIDI Settings, you can select your controller and create customized mappings. As time goes by, I imagine there will be more and more Flow controller mappings posted on the net. Flow is ready for this and includes a 'load mapping from file' to make the mapping process quicker. 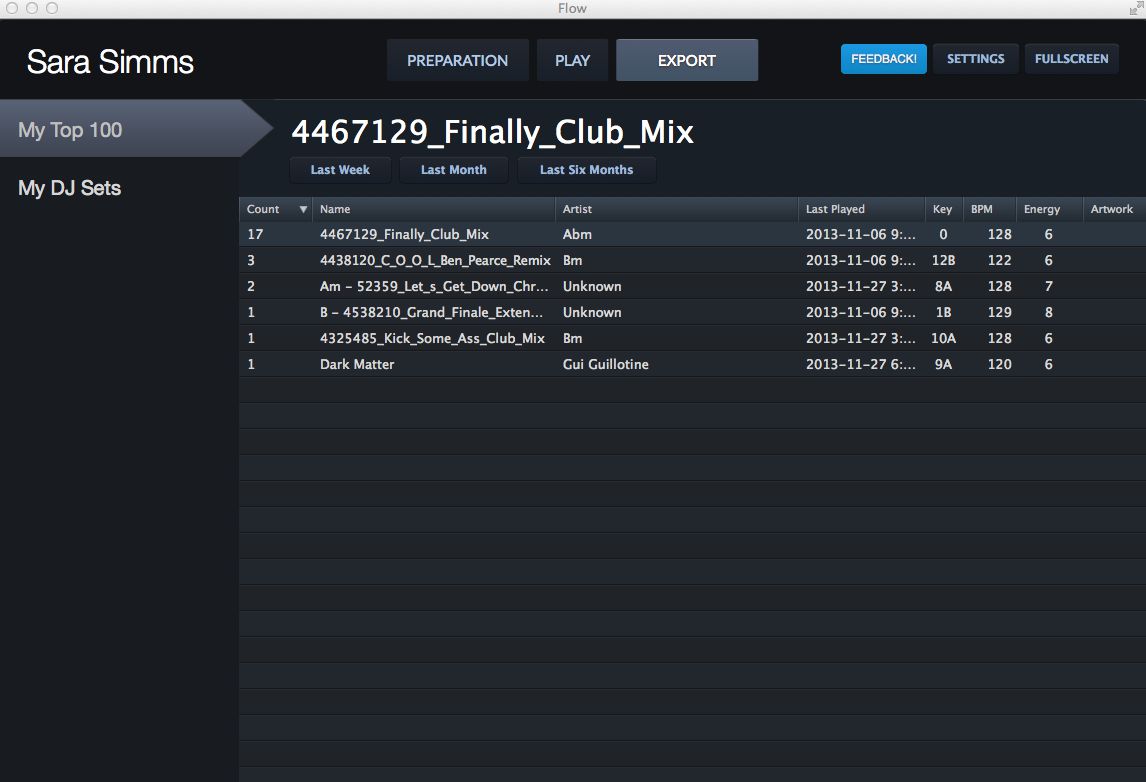 Flow allows you to automatically record your sets; this feature can be turned on or off in the Settings. You can easily export your recorded sets and post them online for fans to hear. In the Export tab, there's also a useful list of the 'Top 100' tracks that you play. I think this is a particularly handy feature, as it gives Djs the ability to quickly create charts by compiling the songs that they frequently play. 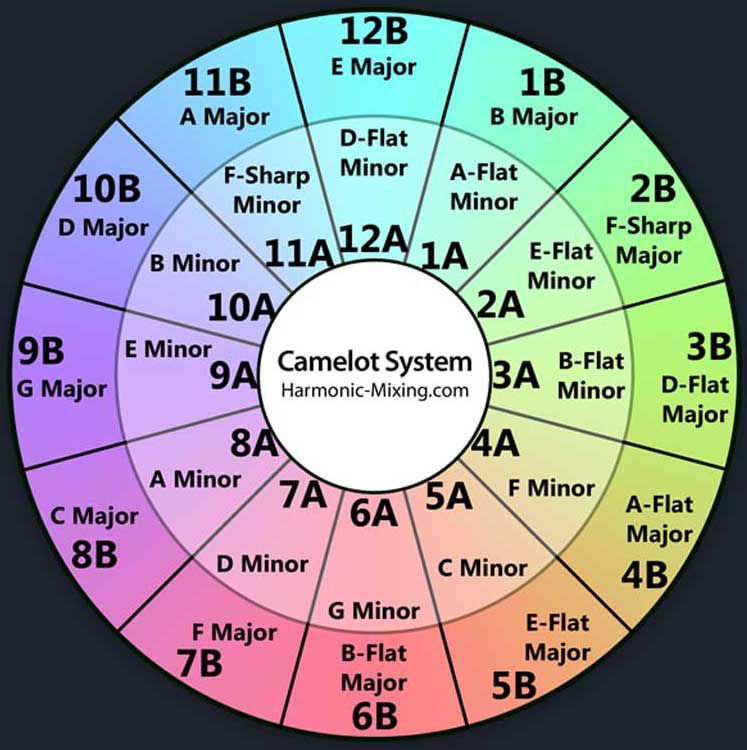 Overall, I think Flow is really solid DJ performance program. I like how Mixed in Key has incorporated the Camelot System keys right into the software. Harmonic mixing has always been a very helpful technique to use in my sets, and I believe that other Djs will be able to improve their sets by paying attention to the keys of each of their songs. Flow has a simple layout and design, which is easy on the eyes and makes the software a pleasure to use. While only basic features are included, in reality you only need a few well-thought-out features and a great track library to create an amazing set. I believe that Flow has a lot of potential for open-minded DJs. In order to fully explore this software, I would highly recommend pairing it with a MIDI controller.

No Effects Incorporated into the software (yet!)

Only capable of two-deck mixing