Image Line has jumped from version 12 to 20 with its latest release of FL Studio. They haven't suddenly got bad at maths - this year is the DAW's 20th birthday. And there's some big news.

20 years is a long time in music technology and FL Studio, which started life many moons ago as FruityLoops, has just turned two decades old. It’s massively more advanced now than at launch, having evolved into a fully fledged music production suite some time ago. In recent years it has had big overhauls like the vectorisation of the interface to allow resizing on huge displays, and some of the most advanced touch screen support available on any music platform.

What has been a constant over its history was its sole availability on the Windows platform - until now, that is. Back in 2015 when we met up with the Image Line team at Musikmesse they showed us an Alpha (i.e. very early) version of FLS working on Mac OS X. We kept tabs on it for a while, but after a couple of years things seemed to have gone fairly quiet. The company remained committed to bringing it to the Mac, but rewriting or porting every part of it including all the plugins was a massive job. 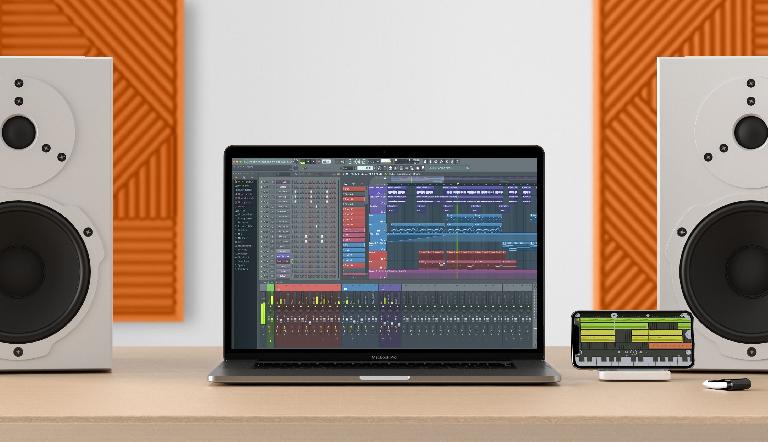 But now it’s here - 64-bit native, with support for Mac VST and AU plug-ins, complete project exchange with the Windows version and also third party plugins as long as they are installed on both systems. The Mac and Windows versions are functionally identical barring minor setup differences. We must also mention Image Line’s almost uniquely generous licensing policy of lifetime free updates. That means you’ll never pay for updates to your version, and also now if you already own a Windows license, it will unlock the Mac version too.

FL Studio, it’s fair to say, has a rather different approach to workflow than many other DAWs. It’s a bit more esoteric than a Logic or Pro Tools for example, with its own way of doing things. Frankly it does so much that there’s not space to list it all here but a visit to the site will provide an exhaustive list. It uses different paradigms too. The main area is called Playlists, and holds Playlist tracks, which can contain MIDI, audio or automation. Clips and instruments can be routed to different mixer tracks, or one MIDI clip could trigger every channel rack instrument. 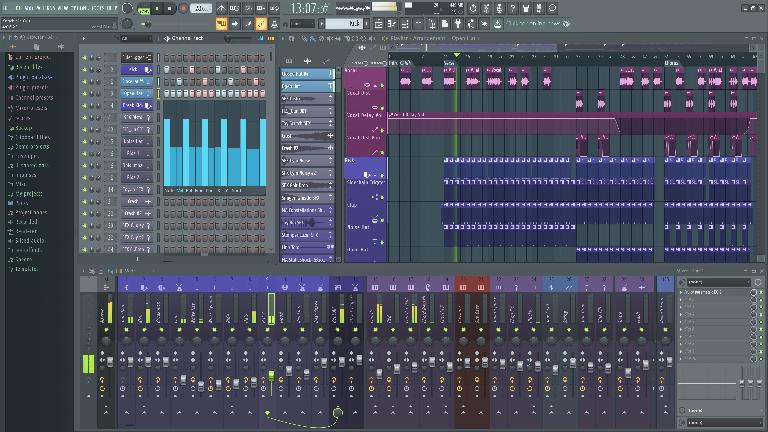 These concepts - and other specific workflows it uses - will be familiar to experienced FLS veterans but do take some getting used to for newcomers. A Cubase user can figure out the basics of Logic for example pretty quickly but maybe here it's slightly trickier until they have invested a little time. That’s not a negative - products are different - but just an observation.

Power users will be glad to hear that the Playlist Track limit has increased from 199 to 500. While still not unlimited, this makes it much less likely that even the largest project will hit the limit. There’s also now support for multiple time signatures in a project, with the playlist switching seamlessly as it encounters time signature instructions during playback. There’s more flexibility with arrangements now, as the Arrangements menu allows you to manage multiple Playlist versions of the project - working ideas, sound design, versions and so on.

You can now “consolidate” - or freeze - tracks, sending selected audio or pattern clips to a single audio clip in several different ways. Automatic Plugin Delay Compensation now works across all parts of the DAW including audio recording, metronome, mixer FX slots and more. The main Toolbar is redesigned and now editable. They’ve even found time to bring back a couple of classic features including the Graph Editor and Sampler Channels. Mixer track count has increased from 104 to 125, new mixer layout presets are available and the comprehensive bundled plug-in set has been tweaked with multiple models receiving updates. Amongst these are many interface tweaks, 64-bit compatibility where it was lacking, and much more. There have been a great many small changes to various parts of the DAW, and a full list is available on the site. 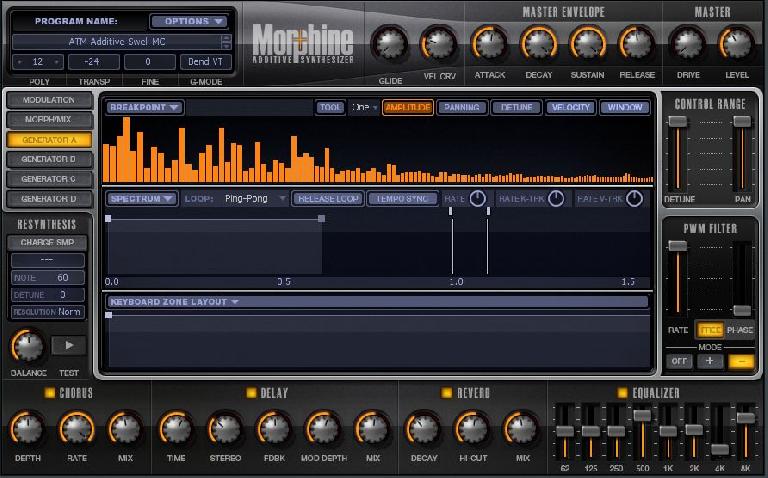 There aren’t any really huge new features in this version, although there are many very solid additions and upgrades. This is likely due to the massive undertaking of porting it in its entirety to the Mac platform - something that has taken years and that would strike fear into the heart of many developers. For its success in this, Image Line is to be applauded. Users on both platforms will welcome the new expanded track counts, time signature and arrangement tools, track freezing, PDC and hundreds of smaller improvements. FLS remains one of the few highly scalable DAWs in terms of its interface, and its touch screen support (which Mac users won’t really get to try out to any great extent) is among the best around. 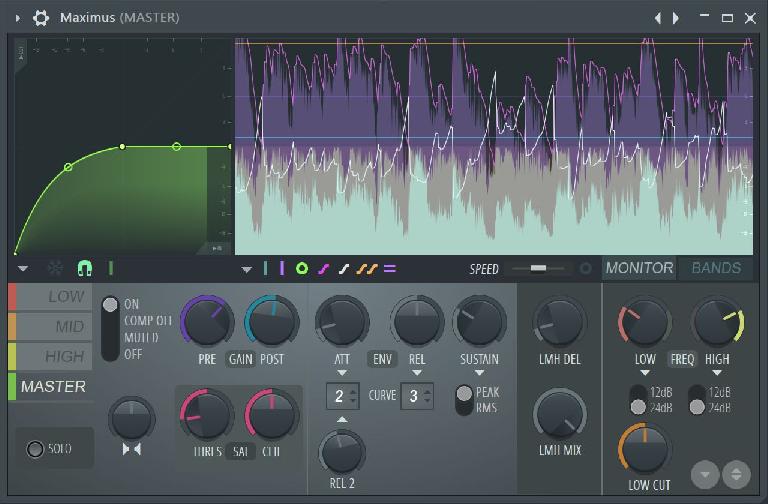 The generous lifetime free update policy means that updating is and will always be free. For new users, the Producer Edition is 189 EUR, the Signature Bundle with expanded plugins is 289 EUR and the “all plugins” bundle is 792 EUR. Although full audio tracking and editing is available and has been for a long time, FLS still feels to me like it shows its roots as a MIDI pattern sequencer. There is a fair amount of right clicking, submenus and for the uninitiated, wrapping your head around the workflow. It’s very powerful, but does things in a way that can seem a little involved at first. Experienced users breeze through all this of course - and there are many of them. 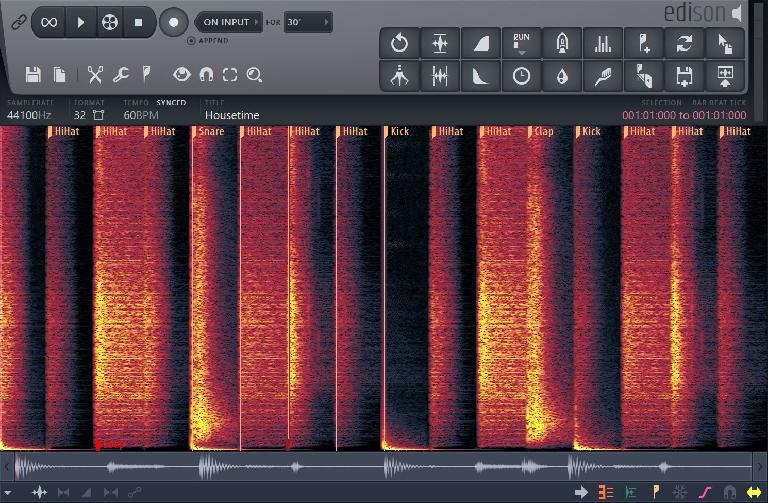 With the move to the Mac, FL Studio 20 joins the ranks of true dual platform DAWs and comes with a great selection of plug-ins, tools and features. It’s attractively priced and though not possessed of some of the higher end features of more expensive DAWs, is also more fun to use once you are familiar with it. There’s a free demo available to download so you can check it out. And Mac users, this now means you too.

Cons: Takes a little learning for switchers or new users. Can be window and menu heavy. No score editing. Requirement to pop out windows and plugins to edit audio rather than working inline can feel jarring.