Language
The days of moving from your iPad back to a desktop to master your tracks may be over'¦ Hollin Jones adds the extra shine to his mixes in .

Somewhat surprisingly, Final Touch is only the second dedicated mastering app to be released for the iPad platform, and the first from a developer with a track record in developing pro audio apps for the platform. Mobile DAWs like Cubasis, Auria, GarageBand for iPad and the like will let you approximate mastering using effects, but as most producers will know, a separate set of tools is often desirable for this crucial final step in the process of finishing a track.

Final Touch is a mastering suite and in the same way as iZotope's Ozone on the desktop, brings together a collection of processing modules and integrates them together with the express aim of helping you get great sounding masters. The iPad makes a lot of sense as a mastering tool: you don't need MIDI or lots of I/O, just some processing grunt. This app runs on iPad 2 or newer and needs iOS7.

Although you can master on good headphones, it's not the best way to guarantee great sound across a range of playback devices. For that you will want to plumb in some decent monitors, either via the headphone out, an iPad Dock or an audio interface connected via USB. Put simply, the better quality playback hardware you can connect, the more accurate your masters will be.

Importing audio into Final Touch can be done in a number of ways: via the iTunes file sharing section, from Dropbox, via FTP, AudioPaste and from your iTunes library. Tracks stored in iCloud aren't supported, but then this is usually the case. It would be nice to see a web server system added here too, so that you could fire files between your desktop and iPad via a browser, which is often the quickest method. The export options are almost identical, with the addition of the ability to attach a file to an email. 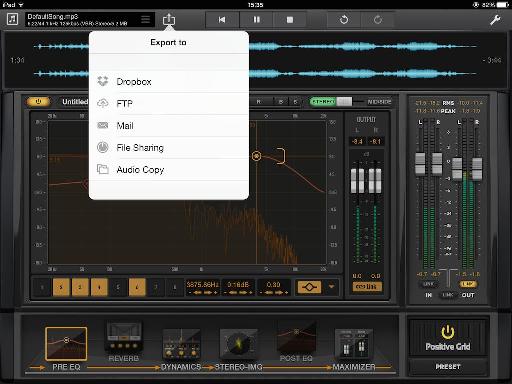 Export to a number of different locations.

The app is really nicely laid out, with a chain of processing modules visible along the bottom. These can be rearranged by tapping and dragging, bypassed by removing them from the signal flow and single tapped to reveal their interfaces. There are tons of presets sorted by style and you can edit and save your own. You can have up to six active modules that include Pre EQ, Reverb, Dynamics, Stereo Imaging, Post EQ and a Maximizer. Each one has multiple controls operated by touch, with knob behavior configurable to suit your needs. 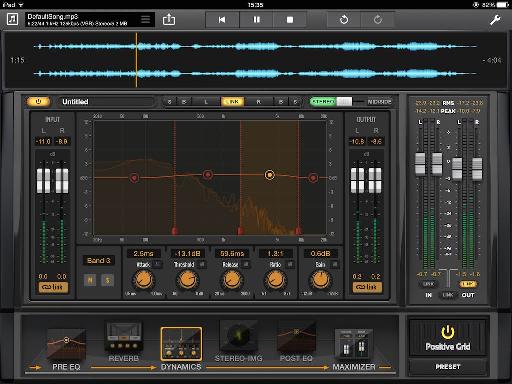 Tapping and dragging modules lets you re-order or bypass them. 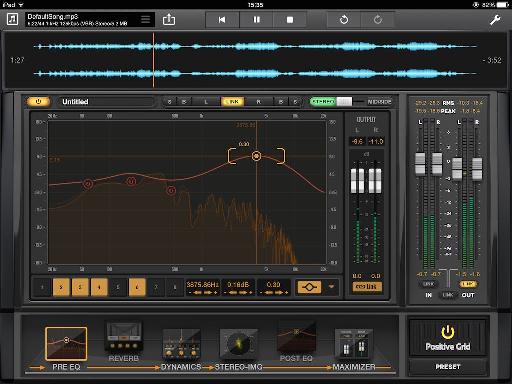 There's much more on offer across the modules than simply whacking up the limiter or picking out some frequencies. Lots of detail can be found on the website but just to mention a few: multiple independent bands of compression and limiting, transparent peak limiting, dithering and noise shaping, stereo and mid/side processing options, fader linking, double precision, 64-bit processing and high resolution metering. It's extremely intuitive to use, with the touch interface brilliantly suited to tweaking bands, EQ and levels with your finger. It also sounds great and feels professional without blinding you with science. Additionally you get inter-app audio and Audiobus routing support so you can combine it with other iOS apps for greater flexibility.

Stereo widening is just one of the mastering processors available.

Final Touch is an excellent mastering app and provides the last piece of the puzzle when it comes to making music on iPad. It has a set of desktop-class processors for mastering your tracks and far more depth and a greater level of control than you might have expected. For the price, it's a must for anyone producing on iPad.