Language
The new Tverb from Eventide uses three virtual microphones with the aim to simulate the reverb of a space. Each mic position can be adjusted and mixed. Joe Albano finds out how well this performs.

Eventide’s new Tverb is a fairly unique reverb plug-in that actually combines several processors—a Compressor, (2) Gates, and Reverb, along with the ability to simulate the reverb of a specific space as picked up by three virtual microphones, whose virtual positions are user-adjustable in the virtual room. But the main selling point of the processor is its ability to dynamically add reverb from the different virtual mics to the signal, thanks to the Gates. A little background is in order. Tverb was created by Eventide in association with engineer Tony Visconti, based on his vocal recording technique used in the sessions for the title track of David Bowie’s 1977 Heroes album. Those vocals were recorded in a very large room (normally used for orchestral recordings and the like) in Berlin’s Hansa studio. 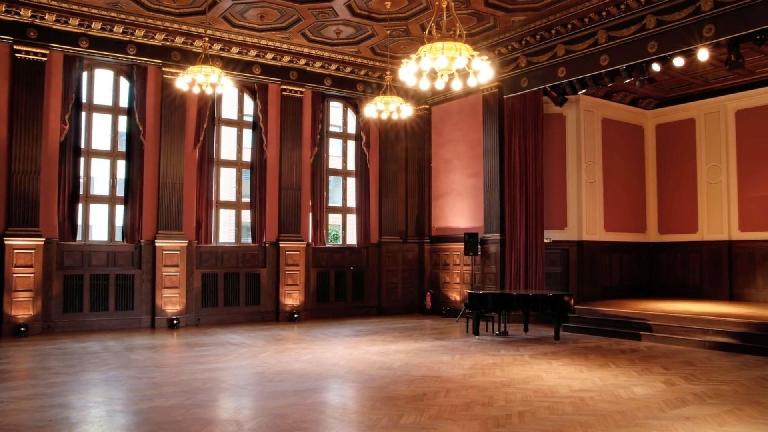 To compensate for the fact that there was only one track left to record the vocals, Visconti devised a three-mic setup—the main vocal mic plus two room mics. The room mics were gated, so they would only open up when Bowie sang louder, adding more room to the more intense parts of the vocal performance (if you listen to the song “Heroes”, you can hear this working). 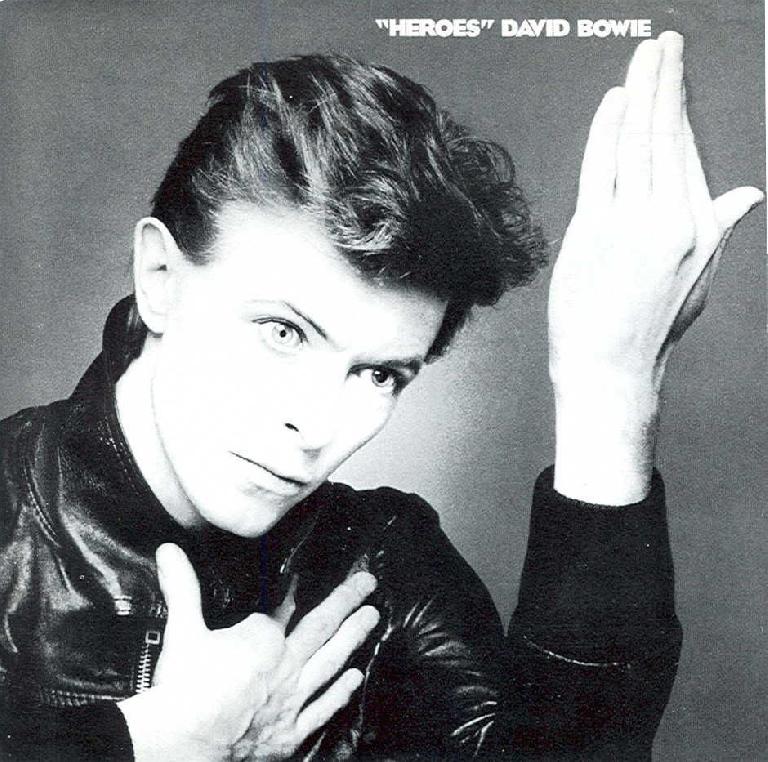 Eventide and Visconti set out to recreate this dynamic reverb processing by modeling the original acoustic space at Hansa, not once, but three times—as it would have been picked up by the three differently placed mics in the original recording. Then they recreated the original processing chain, which included a Compressor on the main (vocalists’) mic, and independent Gates to control the two room mics. The contribution of each of these is managed by the plug-in’s built-in mixer, inspired by the classic ’70s Neve console used in the original sessions. The reverb emulation itself is adjustable, with controls for decay and diffusion, plus two-band semi-parametric EQ. 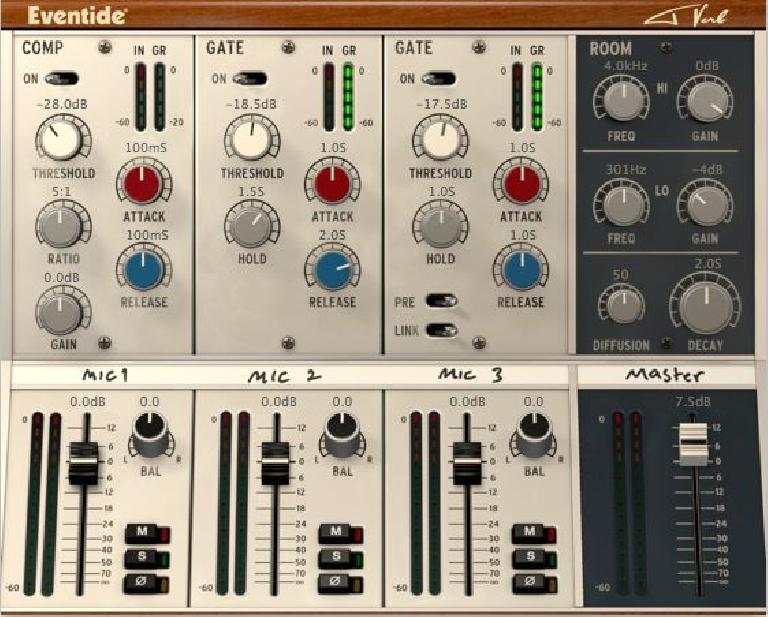 The three reverb'd signals from the mics are sent to the mixer section, where all processing is done (post-reverb). But before you get there, the virtual mics themselves have several adjustments (Fig 5). The main (front) mic—the vocal mic itself—can have its virtual pattern set, to omni, cardioid, or bidirectional (figure-8). Cardioid is pretty much the dry vocal signal, while figure-8 and omni include a little room sound in the main vocal signal (with the plug-in in an insert of a vocal track, I preferred the figure-8 pattern, with its slight ambience). There are also lo-cut & hi-cut filters that can be switched in for this mic.

The two room mics lack these adjustments, but in stereo (the plug-in comes in m, st, and m->st versions) they’re movable, and can be located anywhere in the virtual space—readouts indicate the position and distance from the main vocal mic (this, like everything else in the plug-in, can also be automated).

Down in the console section (Fig 4), the main (vocalist’s) mic features a Compressor, with all the standard controls. To the right, each of the two room mics has its own fully adjustable Gate. All of these dynamics processors can be switched in or out. Enabling the Gates is what allows for the (two levels of) dynamic reverb processing—the key controls here, naturally, are the Gates’ Thresholds. Each can be set to let the reverb from its associated mic through as desired, providing two levels of room sound that can be brought in for progressively louder, more intense vocal lines or sections. The Gates can be linked, though I preferred to utilize them independently. Normally both are keyed by the post-compression signal, but they can also be set to be keyed pre-compressor—this can provide better control of the dynamic reverb response when heavy compression has been applied to the main vocal mic.

So, how does Tverb sound in use? Well, first off, the quality of the reverb itself is warm and lush—in a mix I added a little boost in the presence range and a slight cut in the lower mids for clarity with the on-board EQ, and lowered the Diffusion a bit on background vocals, for a more distant quality. I tried Tverb on a couple of lead vocal tracks that, like the original Bowie performance, had wide swings in level and intensity, and found the dynamic reverb effect to be very musical, lending a greater intimacy to softer vocal lines, but then letting the room respond dramatically—as it would live—to louder vocal phrases (mic 1) and occasional shouts (mics 1 +2). You can hear this in the audio examples. In example 1, on the lead vocal, you can hear the two room mics kick in independently on different phrases—longer Releases for the Gates helped smooth this out.

In example 2, I added a second Tverb on the backing vocals (subgroup), set to allow more room through overall—when the lead singer leans in with a softer vocal line, Tverb 1 pulls back on the reverb, for a closer, more intimate delivery, while Tverb 2 opens up the room mics on the accompanying harmonies, which fill out the space and add some depth behind the lead singer’s voice. 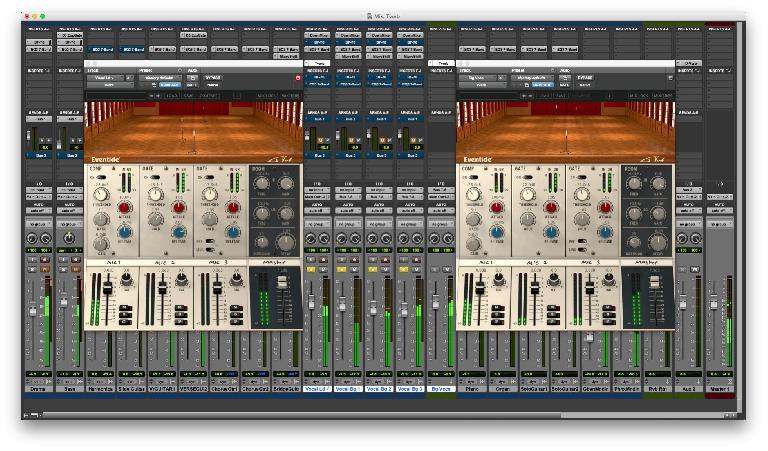 But Eventide is quick to point out the Tverb is not just a one-trick pony—presets are included for all sorts of applications, from winds and brass to drums. Having this kind of slightly more complex hookup readily available (with save-able settings) in one plug-in is a particularly quick and convenient way to add some musical, dynamic reverb processing to various tracks in a mix, as called for, though, of course, it really shines on vocals. Overall, Tverb would be a welcome addition to any mixer’s arsenal of reverb effects, and is well-worth a listen.

Cons: None, really, as long as you’re not looking for a more versatile selection of different room types