Eventide have made one of their most popular, classic reverb algorithms available for everyone in Shimmerverb that takes any source and makes it literally do what its name suggests.

Deploying one of Eventide's beloved reverb algorithms in a classic configuration originally discovered by legendary producers Daniel Lanois and Brian Eno – who are credited with first routing that reverb through an Eventide dual pitch shifter – Shimmerverb instantly transforms the pedestrian into the ethereal. Provided in AU, VST, and AAX native plug-in formats, Shimmerverb comes packaged in a GUI now familiar to users of Blackhole and Eventide’s other H9 series plug-ins, with a host of intuitive features that make it easily programmable and highly playable.

By imposing ultra-smooth pitch-shifting on an already lush reverb tail, Shimmerverb is designed to create a harmonic expanse from nearly any type of impulse. The simple interface comprised of ten knobs, two sliders, and six buttons invites interaction from experienced sound designers and novice tweakers alike.

A simple Mix dial, along with the Input and Output gain sliders, adjust the amount of reverb signal audible; Mix Lock ensures the Mix setting won’t be altered when switching presets.

The Decay control governs the duration of the reverb tail while a Size knob shrinks and expands the perceived realm as desired. Two simultaneous pitch shift dials can create a variety of chords with pitch shifting up to an octave above or below the incoming signal, measured in cents for extreme precision (100 cents = one semitone; 1200 cents = one octave).

The Feedback of reverberation shifted in pitch can be offset via the Delay dial, which can be conveniently synced to your host clock for unique rhythmic results one might not expect from a conventional reverb. 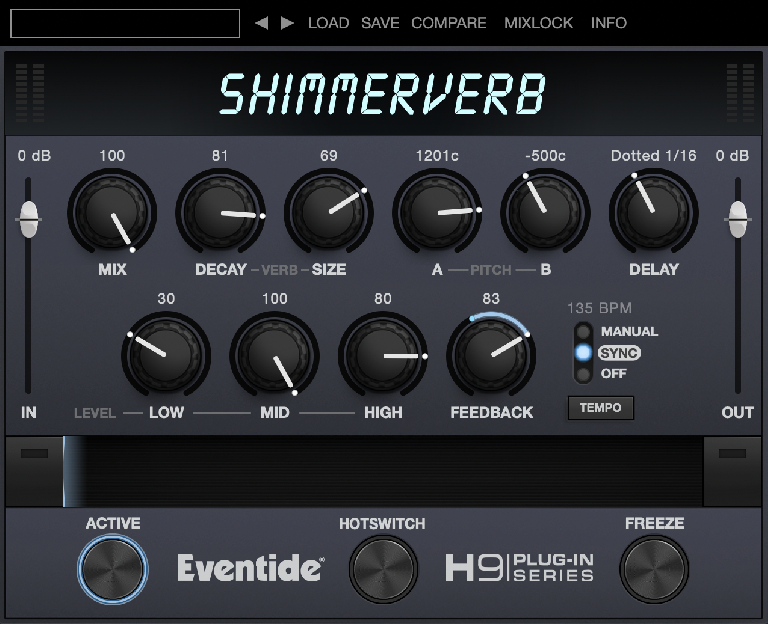 Three EQ bands shape a crossover network which controls the frequencies fed into the pitch shifters. This isn’t a standard pre- or post-reverb EQ, but instead allows for highly creative manipulation of incoming signal: emphasize the lows and pitch them up an octave – or do the opposite by cutting the lows and mids and pitching the high frequencies allowed through down a fifth or an octave. Finally, a Feedback dial goes all the way up to fully frozen, smearing Shimmerverb’s reverberant glory to infinity – or at least until you disengage the freeze function.

Speaking of the freeze function, there’s a dedicated Freeze toggle to instantly hold the reverb output as long as you like without adjusting the Feedback dial at all. On the opposite bottom left is an Active button to bypass Shimmerverb entirely; between these, the Hot Switch toggle switches between two easily stored parameter settings for dynamic changes of multiple parameters.

And if you like dynamic changes in your pitch-shifting reverb but want to morph them more gradually, the ribbon control – the strip below the main dials – can be assigned to a set of multiple parameters, each with their own range assigned by a blue dot in the circle around its dial. Once this is configured for two or more parameters, just grab the wavy blue line in the ribbon area, drag it left or right, and all the associated parameters will change simultaneously within the ranges as you’ve constrained them. All the individual dials are available for host automation and so is the Ribbon controller, making intricate adjustments easily programmable in your DAW.

Shimmerverb easily unfurls everything from percussive impulses to traditional instrumentation or even the most basic synthesized sounds into expansive, gleaming atmospheres. The dual harmonic pitch-shifting with intricate cent control allow for everything from hypnotic diatonic drones to sinister detuned dimensions.

Taking a classic configuration that originally would have set a studio back thousands of dollars for the rack-mount units required and now bundling digitally it with additional features like Mix Lock, Compare, and Ribbon Control – along with plenty of versatile presets that do a good job showing off this unique plug-in’s range – Shimmerverb is a beautifully modern interpretation of a previously exorbitant technique. Ambient producers, experimental instrumentalists, high-end hit makers, and electronic aficionados alike will all find something to love in Shimmerverb.