Language
Fission allows you to split a sound into its transient and tonal parts, independently manipulate them using Eventide's world-class effects and then fuse them back together.

Eventide has always been at the leading edge of effect processing in the audio industry. They’ve given us hardware like the H910 and H3000 Ultra-Harmonizer, classics of early digital delay and pitch processing, and their current line includes both hardware and software processors including emulations of many of their classic toys as well as modern cutting-edge software tools. In that latter category, the company has just introduced Fission, a plug-in which brings new technology to the task of transient shaping and includes a full suite of audio processing to boot. 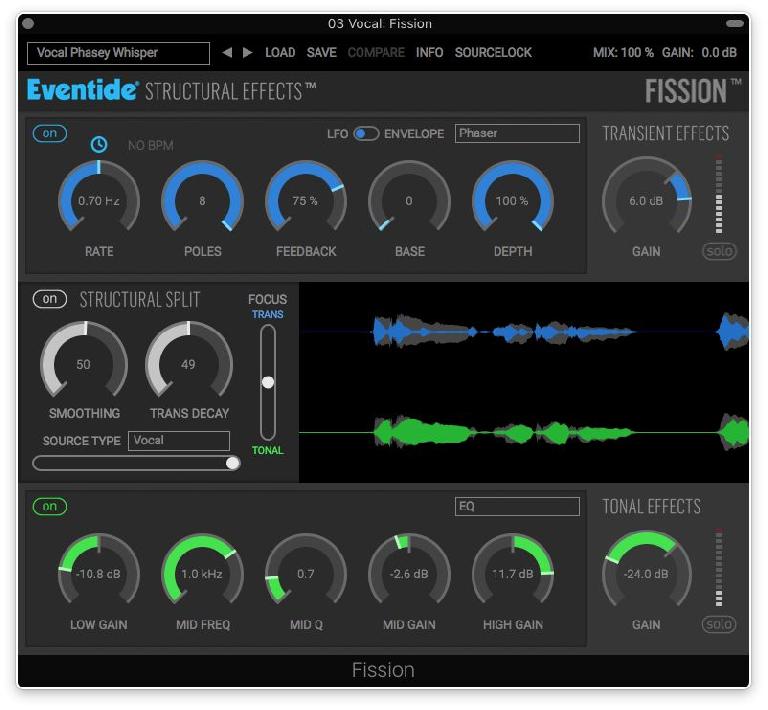 While Fission may at first seem to be yet another transient shaping tool, it quickly shows itself to be much more, thanks to new technology under the hood that takes it to another level. As it turns out, Fission is just the first of a series of “Structural Effects” processors that will be based on Eventide’s latest software technology of the same name. The Structural Effects tech takes a fresh approach to separating transient impacts at the beginnings of notes or sounds and the tonal (decay or sustain) portions. The Fission plug-in then combines this with a suite of audio FX for independently processing the newly-separated “Transient” and “Tonal” sections of the sound.

Your average transient shaper, for the most part, separates transients by utilizing traditional envelope processing, in the way that a compressor can be pressed into service for that same task by utilizing its Attack and Release controls. This usually allows for level and length adjustments to be made to the initial impact and sometimes the decay, but - as anyone who uses them knows - it often takes a bit of finessing, and the audio may take on a noticeable compressed quality at times. Eventide’s Structural Effects algorithms do a lot more analysis and processing under the hood. They compare this to “sifting” grains of sand - in this case grains of audio, which is divided into frames and analyzed, with this analysis serving as the basis for dividing a bit of audio into its separate Transient and Tonal components.

As it’s implemented in Fission, the “Structural Split” section provides a number of user controls to fine-tune the transient/tonal separation. These can be used to smooth out the process, but they can also be employed creatively to take a sound into more unusual sonic territory. 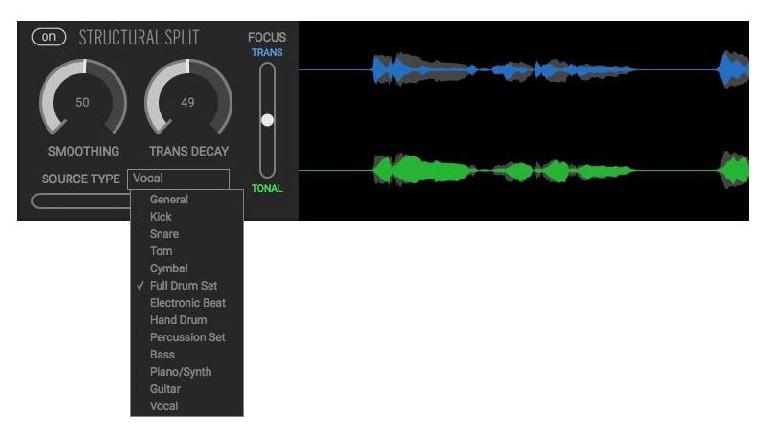 There are four controls available, along with a display that shows via color-coding how the audio signal is being split up into Transient and Tonal parts. The Structural Effects code is implemented as not just a single algorithm but a set of variations on the basic technology, each optimized for different audio sources. The Source Type slider and menu lets the user select the one best suited for a particular track. Matching the algorithm to the source will usually provide the smoothest separation of transient and tonal bits, but again, if you want to get creative, choosing the “wrong” option can often result in more interesting audio effects and this can be especially useful when using Fission for sound design applications.

The Trans Decay knob sets the length of the Transient portion of the signal and adjusting this can take the attacks from short and staccato to somewhat longer and fuller. Likewise, the Focus slider will emphasize Transient or Tonal portions of the split signal. However, both of the controls do more than just act as crossfaders between the split audio components - they affect the algorithm as it analyzes and separates the audio, shaping the resulting Transient and Tonal envelopes more subtly than simple level adjustments. Basic level adjustments for each are available in the individual FX sections, which I’ll get to in a minute.

Eventide suggests using Focus to “guide the parsing of the sound” to favor one stream over the other. Focus also will affect how much of each (Tonal or Transient) part will be processed by the dedicated effect for that section, so when strong FX processing is dialed up, its effect can be even more pronounced. Both Trans Decay and Focus can be employed to shape both the percussive quality of Transients and the attack of the Tonal part. For example, longer Transient Decays will add body to the main attacks but also lengthen the attacks of the Tonal components, then balancing the sound more towards Tonal will give you your auto-swells, turning percussive instruments into pads.

Finally, Smoothing slows down the transition from Transient to Tonal, removing edginess or the occasional “chirps”. For the most natural transient tweaking this might be set pretty high, but again, for creative effects, a little experimentation would be in order.

Even on its own the Structural Effects section of Fission can provide both utilitarian transient processing and more creative effects. You can turn pianos into pads, rimshots into brushes, fingered bass into picked pass and the like, as well as dial up more interesting enveloping effects for sound design. The underlying analysis can often provide much smoother results than traditional transient tools, and if you automate the controls you can get even more creative. But Eventide didn’t stop there. Fission also includes a full complement of traditional audio FX.

Once the separation of the Transient and Tonal sections has been performed by the Structural Effects algorithms and fine-tuned via the Structural Split controls, the two newly-separated audio streams each pass through their own independent Effect and Gain control, before being summed together into the finished processed sound. There are about half a dozen effects to choose from, for both the Transient and Tonal paths. 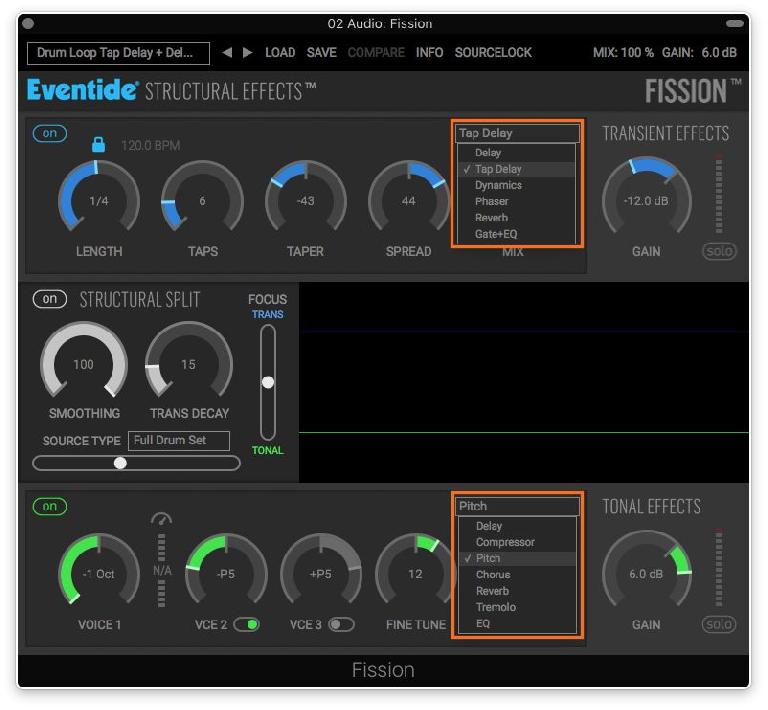 Transients can be processed with Delay, Tap Delay, Dynamics, Phaser, Reverb, or Gate+EQ, while the Tonal stream can be run through Delay, Compressor, Pitch shift, Chorus, Reverb, Tremolo, or 3-band EQ. At this time you can only have one active effect for each stream, but if you set the Focus slider to something other than its halfway position, you can push a bit of Transient or Tonal audio into the other effect as well.

As you can see from the various screenshots, each effect has at least five controls. These FX are not an afterthought, they’re pretty full-featured. The Delay and Tap Delay are particularly nice, with Tempo Sync, filtering, modded/warped repeats and up to 32 taps with ping-pong and speed ramp-up/down options. Phasers let you set the number of poles and resonance, and the Tonal Pitch shifter offers three simultaneous pitch-shifted notes, for harmony creation or extra-thick doubling/tripling/fattening.

Fission, with its combination of Structural Split and FX sections, can handle a variety of tasks that range from basic transient processing to creative sound design. For example, pitch shifting just the Tonal portion of a drum while preserving the natural transient impact can provide a much wider retuning range without any telltale chipmunk effect on the initial attack. Pulling out much of the body of a voice, lengthening the Transient, and adding some heavy phasing can produce a nice, phasey whisper vocal effect.

Adding different delay effects to the components of a drum or percussion loop, or using the Trans Decay control to divide a loop for more independent processing can make for some interesting rhythmic effects. And all of the controls can be put to good use for warping any kind of audio signal into something weird or other worldly, for post-production and creative sound design applications. 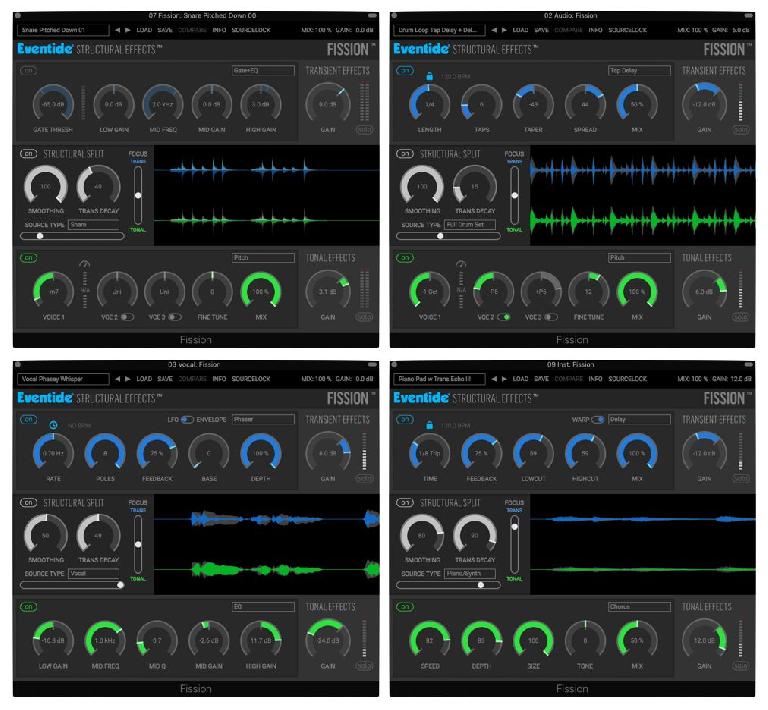 Despite its initial apparent similarity to traditional transient shapers, Eventide has come up with something very new and different with Fission and its Structural Effects technology. Both the splitting and dual fx sections can be utilized for anything from smooth basic transient processing to creative sound design and audio mangling. Eventide suggests that Fission is only the first of a series of new plug-ins that will utilize the Structural Effects technology, and this initial effort is well worth a good long look.

Cons: Only one audio effect at a time per split (Transient/Tonal) audio stream