Running on your iOS device as standalone apps or plug-ins, these three processors from Eventide will help you produce music on the move. Hollin Jones tried them out.

Since Apple added Audio Units support to iOS a number of developers have released iOS-compatible versions of their plug-ins so that you can use them inside mobile DAWs like Cubasis and GarageBand. Now, Eventide has released three iOS versions of its latest plugs and they run in standalone, inter-app audio and AU mode on your iPhone, iPad or iPod Touch. That means you can either run them as FX pedal-style units, send audio between multiple effects, or use them as regular plug-ins when tracking and mixing on iOS.

Into The Black Hole

First up is Blackhole Reverb, derived from the original hardware versions of Eventide’s flagship studio processors and the popular “Space” pedal. With over 50 presets it covers a wide range of reverb applications from regular vocal and instrument ‘verbs to more supernatural, washy effects. Of particular interest are the Gravity control which reverses the arrow of time by inverting the reverb's decay, Ribbon and Hotswitch controls that allow you to “play” the effect in a creative way rather than it being static, and Mix Lock, which lets you scroll through presets while keeping the wet-dry mix constant. 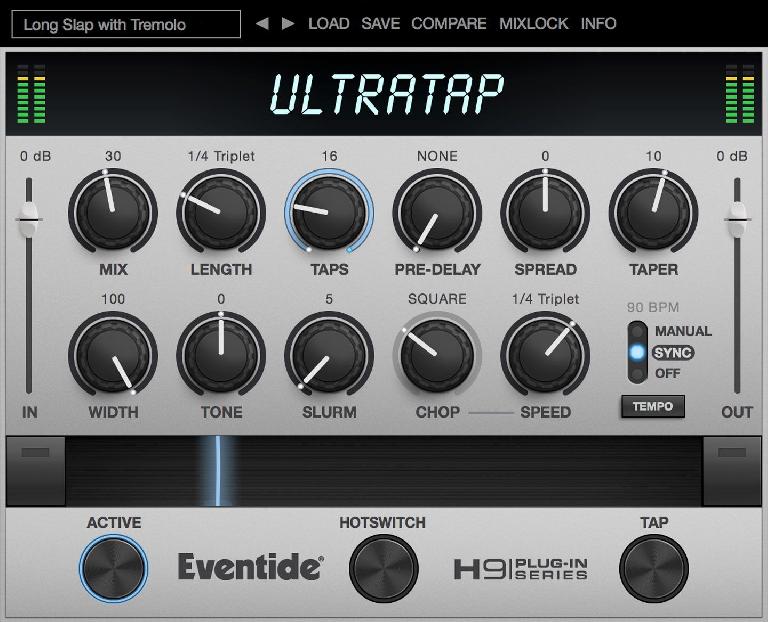 UltraTap Delay is next, descended from the original H3000 unit. With a focus on tap control, it has 150 presets and the same performance features as the reverb. Here you also get up to 64 taps to create simple repeats or morph delays into choruses and reverbs, and using the Spread knob to change the spacing between taps is a really fun way to experiment with the effect. Another unique control here is “Slurm", which lets you “smear” taps together or alternatively modulate them to create unique reverbs and ‘mushy’ stutter effects. The results are alternately messy and rewarding depending on how you use it!

Last but not least is MicroPitch, a fine-grained pitch shifter that allows you to mix delayed and detuned versions of a signal back in with the original. There are two shifted voices, one with -50 and one +50 cents, and each with up to 2 seconds of delay. it helps you to add depth to any sound and again is playable with the Ribbon controller for extra creative uses. You might use it primarily on vocals but it works well on other sources too, for more other-worldly results.

These are great-sounding and powerful plug-ins for iOS that don’t seem to use lots of CPU and are flexible enough to work in the way you need them to turn your device into a stomp box, route sound between apps or use them as regular inserts inside your mobile DAW. It may be that you only need one or two - they are priced slightly differently - but if you make music on iOS or use your device as an FX processor for live performance, they are well worth a look.

Cons: iOS could still be slicker when it comes to working with pro audio, but that’s down to Apple.