Language
If you want the most desired and respected emulations of outboard music hardware in native software plugin format, then Anthology X from Eventide is going to turn your head as Noah Pred discovers.

Loved and admired for decades by savvy studio engineers and unwitting listeners alike, Eventide's legendary range of outboard hardware effects imbued numerous hit records with their distinctive sound. Arriving in the digital realm with a bundle of TDM-only effects some years ago, the recent release of their Anthology X bundle finally sees faithful emulations of their most revered units—alongside a selection of meticulously programmed new harmonization effects—available for the first time for users of native VST, AU, and AAX formats. Comprised of 18 devices that range from the mind-bogglingly complex to the deceptively simple, Anthology X delivers a wealth of sonic potential—and that magical Eventide sound.

Starting with the units that made Eventide famous, the H910 and H949 are essentially a pair of unique delay units with a pitched feedback signal that allows for a variety of tonal transformation, from wildly bubbling rhythms to subtle chordal embellishments. Both come in mono or linkable dual stereo versions.

The workmanlike H910 features a range of relatively short delay times from roughly 7 ms to 112 ms, along with input level attenuation, feedback, and mix controls. The pitch can be controlled in three modes: manual (via the dial above), anti-feedback  (interpolating higher and lower pitches as determined by the anti-feedback dial), or—supposedly—via MIDI input. Manual mode allows for the most expressive control, with an octave of range above or below the center reflected in the Pitch Ratio display, with adjustments to the Feedback and Manual knobs generating crystalline permutations that quickly make flat material effervescent.

Offering longer delay times up to 400 ms and a pair of Feedback controls along with Low and High feedback EQ dials, the H949 is built with four algorithms: Delay, Random, Flange, and Reverse. Coupled with the ability to go down two full octaves—but still only one above—the Manual pitch control, in concert with the feedback dials, makes the H949 one of the most expressive delay units I've encountered.

When using the Dual version of either unit, the handy Link toggle lets you adjust both stereo delay lines simultaneously—while the Revlink option inverts the left and right pitch values for expansive stereo effects. Meanwhile, the handy Mix Lock button ensures the Dry/Wet blend remains at the selected value even when changing presets. While the H949 clearly provides enhanced control, both units are great for both subtle delay-based harmonization or extreme atmospheric embellishment. 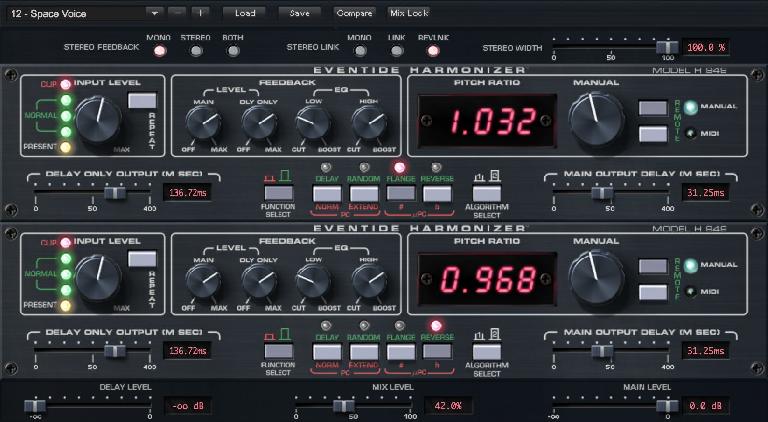 Eventide's flagship H3000 harmonizer revolutionized digital processing when it was first released in 1986 as the world's first diatonic pitch shifter. Featuring a modular patchable architecture that begs to be tweaked, the plug-in version is a lovely beast indeed. Comprised of pairs of loopable delay lines, pitch shifters, selectable low- band- or high-pass filters, LFOs, envelopes, amplitude modulators, and scales—all routed through four pairs of mixer slots—the possibilities are beyond expansive. The patching panel makes it a pleasure to devise devious signal paths, Expert mode provides access to multiple parameters simultaneously, and Function mode allows for extensive MIDI control and other mapping. If that all seems daunting, there's hundreds of well-grouped presets to explore as starting points—each with up to 16 snapshot permutations. 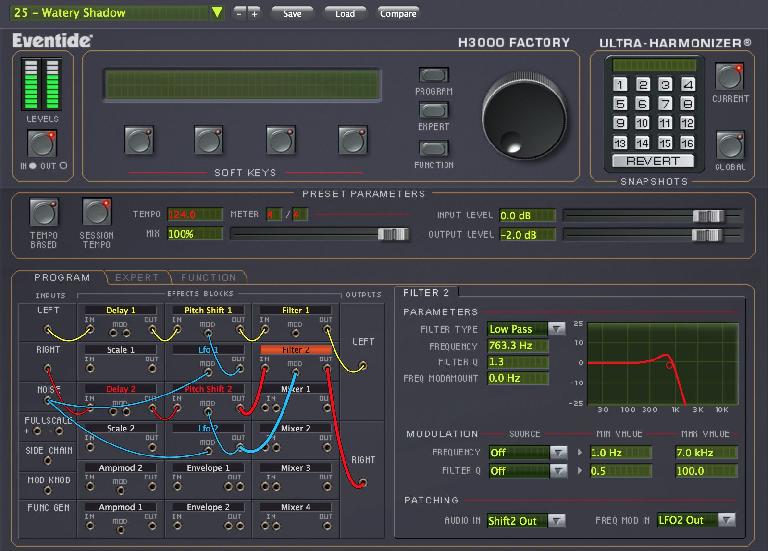 The H3000 Ultra-Harmonizer in patch mode.

The Band Delays version of the H3000 delivers another approach to pitch-shifting delay, housing a bank of up to eight delay lines. Each line has its own Notch, Band, High, Low, or All Pass filter, an independent delay time of up to 2.4 seconds, and a discrete stereo panning location. An assignable LFO-like “Function generator” is available for modulation of global parameters such as Feedback, Delay, Q, and more, resulting in detailed multi-tap echoes with a whole lot of flavor.

Two elements make the H3000 Band Delays extremely enticing as a creative musical tool: first, the ability to select the filter frequency value of each delay line by musical note—arguably with best results in band-pass mode—and the ability to see where each delay time falls in a 16th-note grid synchronized to your host tempo, allowing for a range of harmonic, melodic, and rhythmic delay patterns that can breathe life into even the most basic audio sources. 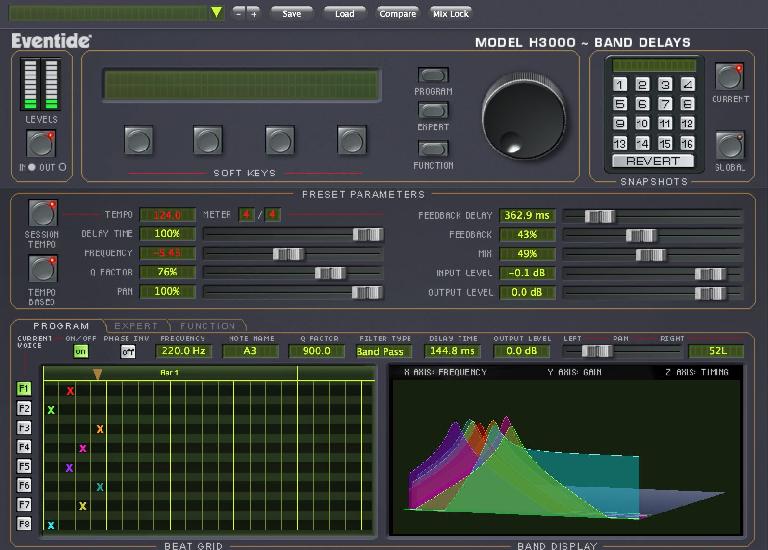 First, select your key and scale, then activate up to eight delay lines, depending on how many additional notes or taps you need. Once activated, each delay shows up with a corresponding note in the notation grid, which can be dragged up or down to a different note in the selected key and scale, or left and right to a different 1/16th note interval in the bar. Each delay line can be fine-tuned above with its own discrete tuning, timing, feedback, level, and panning, which determines the coloring of each line, helping to differentiate them in the notation grid below.

An overall loop delay with feedback control—to repeat the entire pattern of delay taps—is located below, along with a mix blend slider. Up to sixteen snapshots can be programmed per-preset, and the handy Key Lock toggle ensures the desired key and scale will be retained while testing other preset configurations.

Quadravox offers the identical feature set limited to four delay-lines to save on CPU —or for when you simply don't need more than four notes. Whether you're looking to fatten up a monophonic patch with detailed harmonic enrichment or want to diatonically arpeggiate an overly simplistic melody, it's difficult to imagine a more inspiring tool than Octavox. 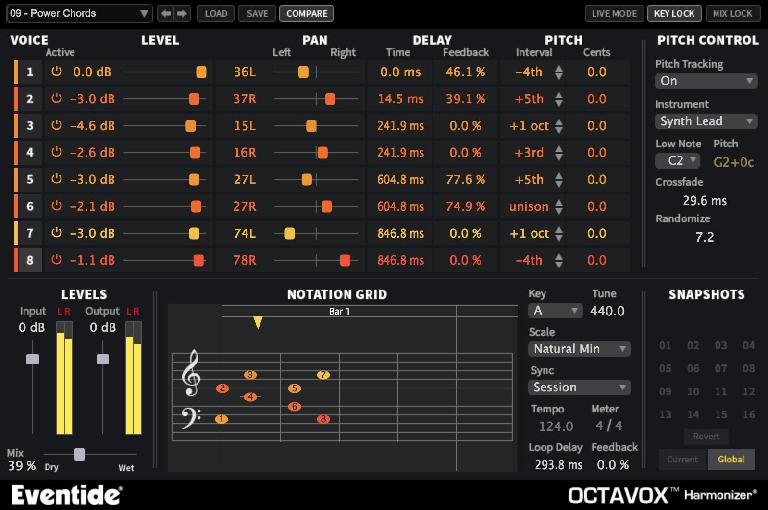 As if that all weren't enough, the included Ultraverb is one of the more creatively considered—and exquisite-sounding—reverb devices I've come across. Featuring a pair of Hall, Room, Plate, and Chamber impulses, along with an Ambience setting, Ultraverb sports the usual compliment of digital reverb settings. A smoothly pitch-gliding Room Size parameter with adjustable glide amount allow for some intriguing modulation possibilities, while the Lo-Fi setting helps introduce some grit to an otherwise pristine reverb unit.

Ultraverb's built-in host-sync'able stereo delay line and compressor—each of which can be set to Pre or Post reverb—make it a powerful spatial design tool, creating reverberant echoes and thickening up your atmosphere without needing to reach for another device. Better yet, four independent EQs are available for the Reverb, Input, Output, and Delay. Throw in Eventide's Snapshot system and Mix Lock toggle, and it's likely to become your go-to reverb whenever you need top-notch sound without sacrificing processor power. 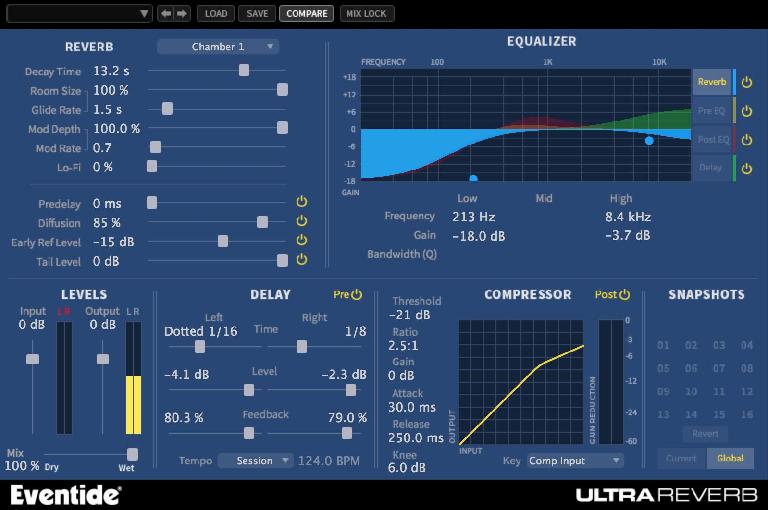 If it only consisted of the devices described above, Anthology X would already be worthy of serious consideration from any sound designer or creative producer—but Eventide saw fit to throw in emulations of their Omnipressor hardware compression unit, classic Clockworks Flanger and Phaser, Urei-modeled EQ45 & EQ65 equalization and filter banks, and the full-featured UltraChannel and streamlined EChannel mix bus processors, in addition to their Precision Time Align and Time Delay utilities.

All in all, it's a very impressive bundle. While it may take some exploration to come to grips with all the potential on offer, there's no question Anthology X is one of the most powerful effect bundles on the market, combining a range of vintage recreations, innovative transpositions, and brilliantly executed mixing tools—all of which manage to sound great while going easy on the CPU. The price tag may be high for some, but in capable hands, there'd be no doubt it's money well-spent.

Price: $1195 USD; $699 until November 30 with possible upgrade pricing from Ultrachannel and other Eventide licenses.

Cons: Not out of range for big studios, but probably costly for most bedroom producers; no info help option built into the GUI; harmonizer MIDI implementation lacking at best; few devices include host-synchronized individual delay timing.