The latest synth module from Erica Synths allows you to draw in your own waveforms with hardware encoders. But Scott Riesterer found out there's even more to it than that...

There’s something endlessly fascinating to me about visualizing sound. Being able to see a waveform morph and change while hearing the results in tandem can be informative, but it’s also just really cool and fun. Wavetable synthesis lends itself so perfectly to visualization it’s surprising more modules and synthesizers don’t incorporate oscilloscopes nowadays. The probable reason they don’t is cost, but Erica Synths have managed to feature a beautiful, large display in their aptly named Graphic VCO while keeping the price at a reasonable $399 USD.

Erica has a wide and diverse product range including modules boasting vacuum tubes, standalone synths and DIY kits. They hail from the coast of the Baltic Sea in Riga, Latvia; a city that predates my hometown of Vancouver by over 600 years! It apparently has a healthy arts and cultural scene, UNESCO worthy architecture, and a thriving IT sector. The Graphic VCO was the first module from Erica that has graced my rack, but I’ve heard people rave about their other modules so I was excited to try something out, and curious to find out for myself what all the fuss is about.

The Graphic VCO from Erica Synths represents the culmination of three years of development and refinement. It features two pressable encoders, four knobs, four CV inputs, two audio outputs, a back button to exit menus and a large black and white LCD screen. If a CV input is connected, the knobs become CV attenuators. This threw me off a little at first because I wasn’t expecting it, but it’s an interesting way to make the most of the controls. There are advantages and disadvantages to this approach. On the one hand, it lets you control the range of modulation without using a separate attenuator. On the other hand, this means that you can’t offset your range of modulation without some kind of bias voltage added. In this case, I didn’t really mind it for FX and FX Amount, but it would have been nice to have a separate attenuverter for the Morph CV. Of course, that would have made the panel asymmetrical and less stylish.

And stylish it is. The module features Erica’s trademark black panel adorned with pixelated stars, comets and fonts reminiscent of 1980s computer games. Initially, part of me wished that they had used a garish vintage-style green and black screen to really fit the retro vibe; but now that I’ve used it, I realize that would have unfairly pigeonholed the module. While it is certainly capable of producing vintage digital and even chiptune tones, it can also sound very modern, slick, and futuristic. Speaking of slick, I also appreciated the rounded black screws that Erica includes with the module. It’s a small subtle touch, but it really complements the aesthetic. 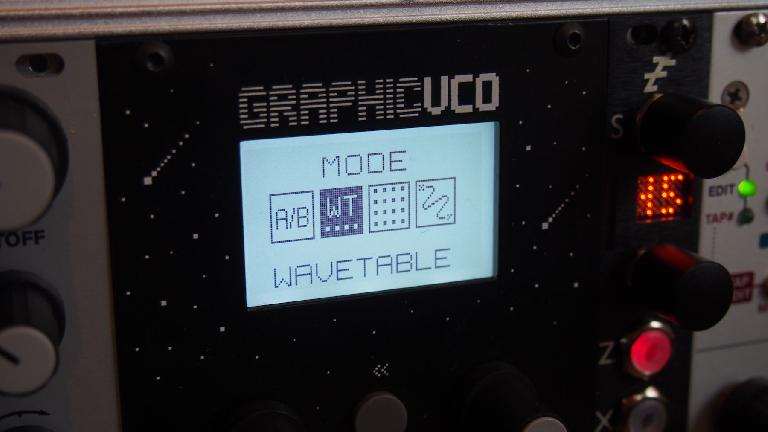 The Graphic VCO has three main modes: A/B Wave, Wavetable, and Matrix. A fourth Live mode is in development for a future firmware update. A/B Wave lets you use the morph knob to crossfade between two waveforms. You can either load a waveform to each slot, or you can draw your own unique waveforms. While drawing waveforms using a pair of encoders might seem like a tedious and laborious task, it’s actually quite fun. Erica has also provided a few clever tools to speed up the process. Basically, one encoder selects the range, and the other toggles between performing boosts or cuts, and widening or narrowing the range. Pressing the first encoder drops down a menu where you can choose the shape that these boosts and cuts form. You can also enter a brilliant spectral mode where you can scroll through and enhance various harmonics, which in turn adds complexity to the waveform. Additionally, the menu includes save, load and reset options. 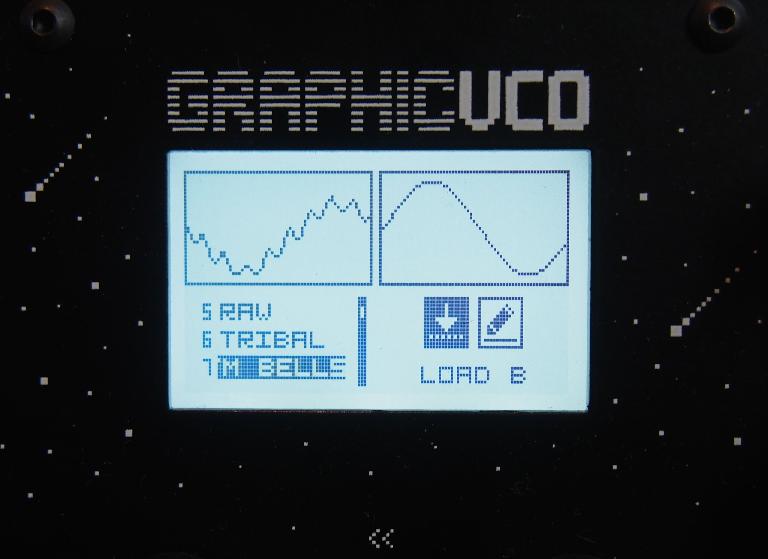 A/B Wave lets you load a waveform, or design your own into two slots.

Wavetable mode loads a wavetable of 16 waveforms, which you can sweep through using the morph knob. The display illustrates the changing waveforms, and a small cursor tells you the position in the wavetable so you can see what’s going on. Sending CV control over morph in this mode is great for creating slowly evolving or rhythmic textures for your drones, pads, or bass and lead lines. Some wavetables have very smooth transitions, while others are more steppy depending on how much of a contrast there is between waveforms. 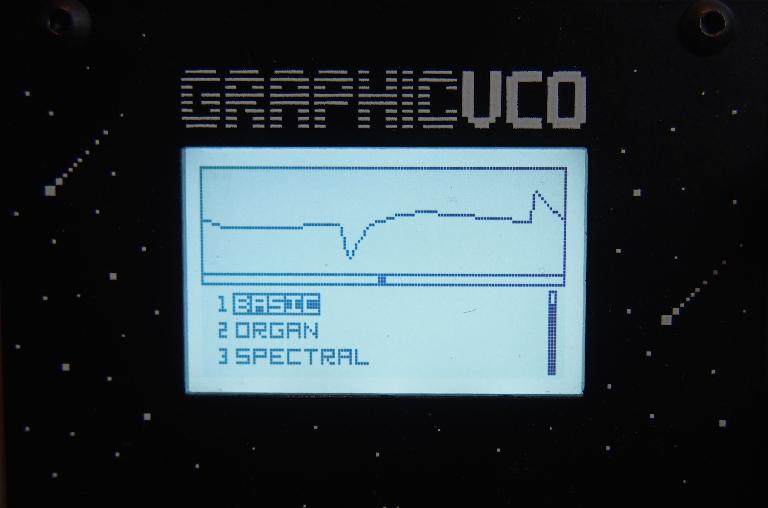 Wavetable Mode has a collection of wavetables, each consisting of 16 waveforms.

Scrolling through Wavetables in WT Mode

The wavetable matrix lays out the Graphic VCO’s wavetables into a grid. You can then use the Morph and FX knobs to sweep through the X and Y axis of this matrix grid of wavetables. This mode is a ton of fun with joystick controllers like Intellijel’s Planar, or Erica’s own Joystick Controller module. 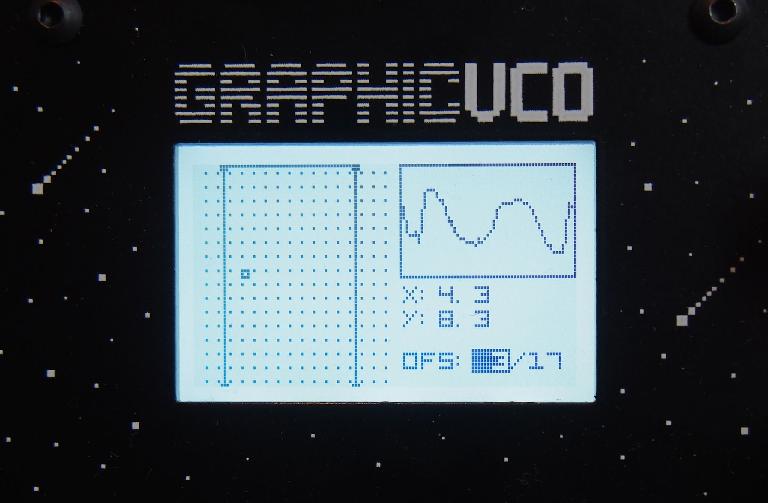 The Wavetable Matrix lays out the Graphic VCO’s wavetables into a grid.

Here’s an example of an Intellijel Planar controlling the Matrix Wavetable position, along with Attack and Release times on Maths.

On top of all of these modes, the Graphic VCO has an effects section accessed through the FX menu. Here you can apply wave wrapping, phase distortion, bit reduction, ring modulation and overdrive to the final

output. These effects can either be controlled with a separate internal modulation oscillator, external CV, or the FX knob position.

The second output on the module provides a sub oscillator. This can either be a copy of the main output, a selectable waveform or a mix of the two. You can transpose this sub oscillator down by up to 24 semitones for a nice thick tone. 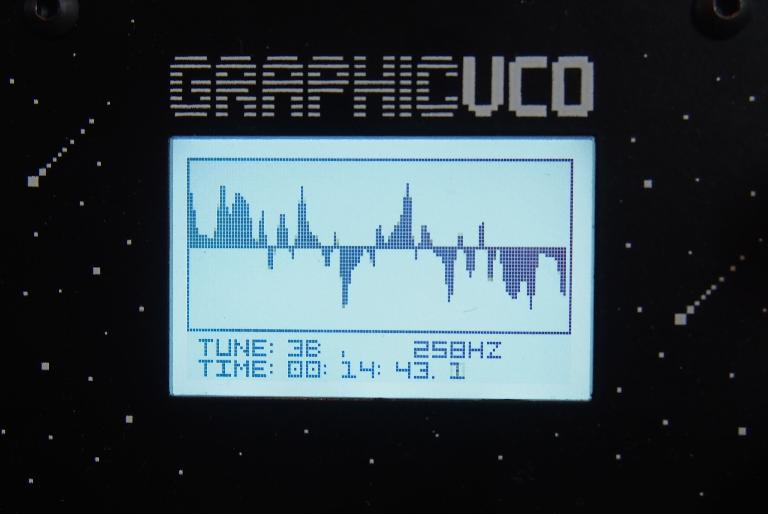 For live performance, Erica has provided an oscilloscope view that shows the waveform of the final output including any effects modulation. This view also shows the current note value played as well as the frequency in hertz along with a timer display. The timer starts counting once you enter this setting, and you can reset it with the right encoder so you can conveniently keep track of your performance times.

There’s an additional settings menu where you can adjust things like scale quantization and screen contrast. You also have the option to toggle the morphing behaviour between smooth and discrete. With discrete, rather than gradually transitioning between waveforms it will be an abrupt stepped shift.

With all of this complexity, Erica thankfully offers a snapshot system for saving and loading settings. These snapshots also provide a useful starting point to hear the diverse range of sounds that can be made by this module, and a departure point to begin your own explorations. Snapshots can be conveniently saved by holding down the back button for two seconds. You are then able to name them before they are written to internal memory. Settings can also be randomized to create new and unique foundations for discovery and sound design.

A growling drone with the Predator Snapshot

A predatory drone with the Growler Snapshot

A short riff with the Ripper Snapshot

A basic shift register melody with FX and Morph modulation 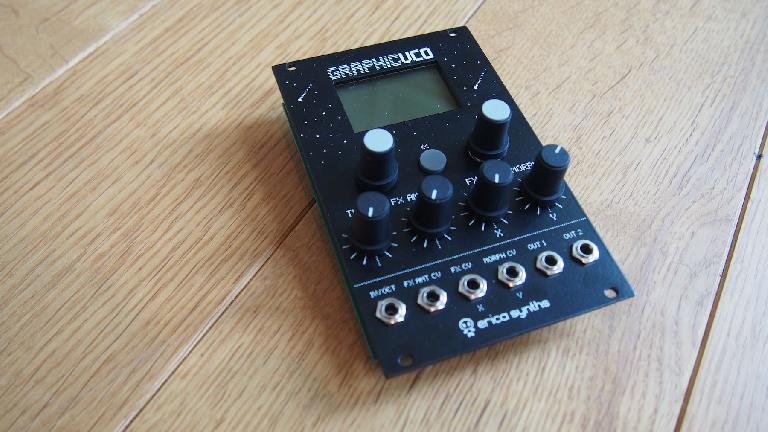 The bottom line is that the Graphic VCO is a joy to use. It’s a module that’s unashamedly digital, yet unmistakably eurorack. I think Erica showed a great deal of careful judgement and restraint in the design of this module. It would have been easy to have made it bloated and cumbersome trying to cram as many features as possible into it, but they kept it fairly simple which keeps the module fun and immediate in use. It’s capable of a huge tonal palette ranging from beautiful to brutal that is bound to fit in with a lot of different styles and systems.

Cons: No attenuverters. No LFO mode. Some menu diving required.

Learn more about synthesis in the Ask.Audio Academy: https://ask.audio/academy?nleloc=new-releases