Language
If you're looking for an attractive synth module that emulates an old Soviet synth, is affordable and sounds amazing, then the Erica Synths Acidbox II is worth considering. Check out our video review.

Erica Synths is a young company based in Latvia comprised of musicians and engineers that collaborate on hardware products very much focused towards modular synthesis. Although larger developers like Roland have returned to the modular hardware world with products like the AIRA range, it’s often smaller, independent developers that do some of the most interesting stuff. Indeed, when I visit friends’ studios they are often keen to show off esoteric pieces of music hardware they have got from small companies I’ve often not heard of before.

Erica states that it works to solve “problems that are not addressed yet” like how to save modular patches, and other things you will be aware of if you work in that world. Intriguingly, they also state that “for the DIY community we offer kits that contain rare and exotic electronic parts that were used in Soviet synths and military technologies”. It’s hard to imagine a multinational being able to say that. So it was with some excitement that I received one of the first units of the ACIDBOX II, which emulates the Russian synthesizer “Polivoks Voltage Controlled Filter (VCF)”. I’ll admit that my knowledge of early Soviet military technology isn’t all it could be, so I’ll defer to them on that.

Watch the video element of our Acidbox II review here:

Unlike many of the company’s modules, ACIDBOX II comes in a desktop rather than a rack mountable housing, making it rather more flexible in terms of both transportation and use in different studio or live scenarios. It can be fed a line level audio signal for processing, so although that can include sound from a modular system, it can actually be sound from anywhere including any hardware synths you like as long as it’s loud enough. 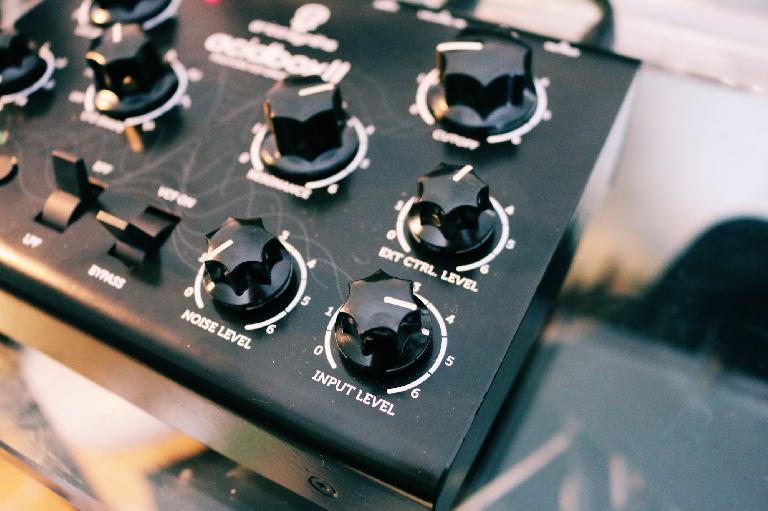 The casing is fairly bombproof in solid black aluminum though the unit is light despite having an internal power transformer. Rubber feet stop it from sliding around. On the back are the ins and outs, beginning with the audio input jack for routing the signal in, and there’s also, of course, a balanced output jack. In between these are two more inputs. The LFO Sync input jack lets you plug a clock signal at up to +10v pulse to synchronize the internal LFO frequency to an external clock: useful if you have an external LFO generator perhaps feeding multiple modules at once. There’s also an external CV input jack that lets you apply any external control voltage signal such as an envelope generator, sequencer or even a CV pedal to the behavior of the unit. Erica recommends mixing this with internal LFO modulation for some cool results. 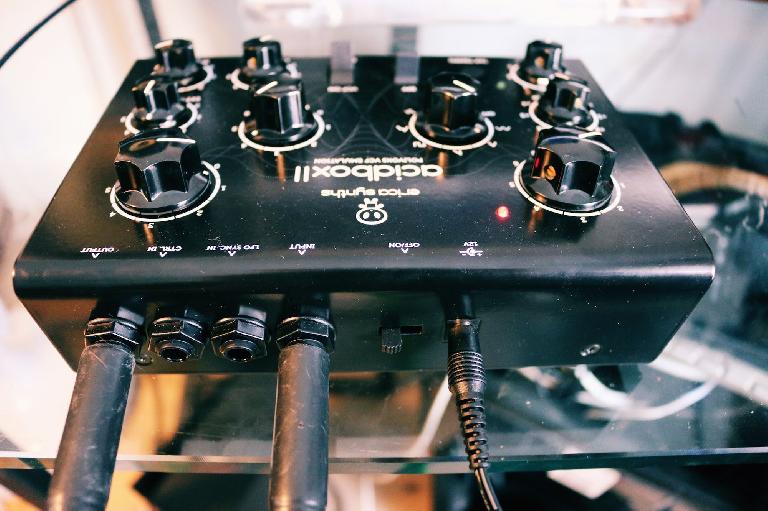 With your signal connected, you can move on to the business of shaping the sound. Starting with the filter, you can flip between a band pass or low pass filter and there’s a bypass VCF switch available too. The Cutoff control is located at the top right and there’s a Resonance knob which runs from zero all the way to self-oscillation. Polivoks VCF is apparently well known for the searing nature of its resonance sweeps, and this one is certainly fearsome. The manual recommends using this responsibly, and I’d have to agree! 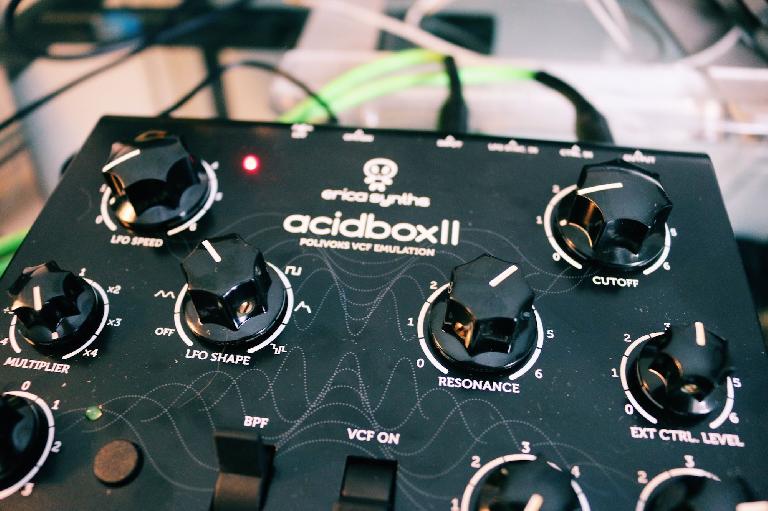 Filtering is made more flexible by the addition of LFO, and there’s much to like in that regard here. For a start you have an LFO select dial to choose a waveshape, with the extreme clockwise setting producing a sample and hold effect. You then set the speed at the top left and also a multiplier value from a division by four all the way up to a multiple of four. LFO level can also be set and you can choose a direct or inverted LFO shape. It’s even possible to enter a tap tempo value for the LFO with a dedicated button, and holding this for four seconds makes the LFO switch to Audio Rate mode. An LED blinks to show you the currently set speed, though, of course, there’s no actual numerical readout. 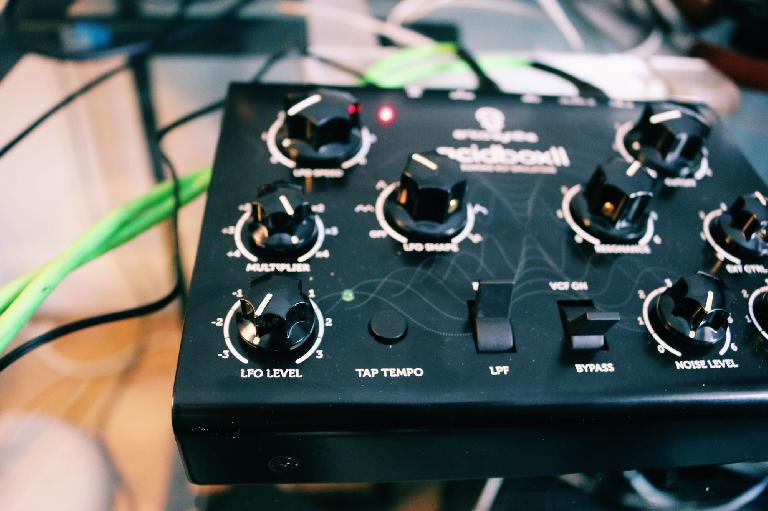 Although there are a number of controls for LFO they are really fun and intuitive to use and the results sound amazing. It’s clearer from the videos than by just describing it on the page how cool the effects sound as you play around with the filters and LFO, morphing and chopping up the synth sounds. There are a couple of other controls including an input level and external CV level control which lets you vary the amount of external cutoff CV. Interestingly there’s also a built-in white noise generator that can be used to add variable amounts of white noise into your signal. This actually enables it to work as a noise instrument with no external input present: simply whack up the noise and then start to filter it and modify that filtering using LFO!

ACIDBOX II has some significant enhancements from the original model and these make it a much more flexible effect. There’s a redesigned LFO with new waveforms and audio rate modulation abilities, the noise generator and a balanced output as well as numerous other tweaks. The company is also able to install an optional extra jack for output of LFO for 20 Euros, which seems reasonable.

Regardless of your familiarity with the original Soviet filter being emulated (and I’m willing to bet not too many people will put their hands up to this one), this is a tremendous little filter effect that sounds absolutely massive on the synth sounds you fire through it. The desktop form factor means it’s more flexible than a Eurorack module and it’s so easy to use that you don’t really need any prior knowledge of synth circuits to have a good time with it. In the studio it’s great for syncing up to your other gear. On stage it’s a more organic way to filter your synth sounds. It screams when you want it to, in a way that’s far bigger than this small box would suggest.