The theory behind the way the Endorpin.es Furthrrrr Generator makes its sounds might be a head scratcher, but as Scott Riesterer discovered, it still sounds amazing and is fun to tweak.

The Furthrrrr Generator from Endorphin.es is an analog dual oscillator module with an emphasis on west coast synthesis. It features their trademark gold panels and multicoloured knobs, with massive ten-turn knobs for controlling the frequencies of the oscillators. Rather than adopting the vintage airline motif of the Grand terminal, the Furthrrrr Generator panel is festooned with cartoon doodles of flowers, a cyclops creature and other miscellany. The Furthrrrr Generator provides the centerpiece of the Endorphin.es 84HP Shuttle system, but also works as a standalone module. Let’s take a look at how much further it can go.

For those not familiar, west coast synthesis refers to the Buchla approach of taking simple waveform oscillators like sine waves, and applying audio-rate frequency modulation and other techniques to produce more complex timbres. This is in contrast to the more familiar east coast approach used by Moog and others where multiple oscillators are used to produce a thick complex timbre, and then a filter is utilized to tame the tone into the desired range. Eventually, John Chowning would employ digital precision to refine frequency modulation techniques and produce more realistic tones better able to mimic acoustic instruments, leading to synths like the Yamaha DX7. Exponential frequency modulation is more common on oscillators because it relates to the human perception of sound. In order for our ears to detect a change in pitch, the difference in frequency must increase exponentially the higher up the scale it goes. When you connect a melodic CV input into an oscillator, if it didn’t use an exponential curve the response would be rather atonal. Linear frequency modulation means that if the carrier and modulator are changing frequency, but maintaining the same ratio to each other, the timbre will stay consistent. 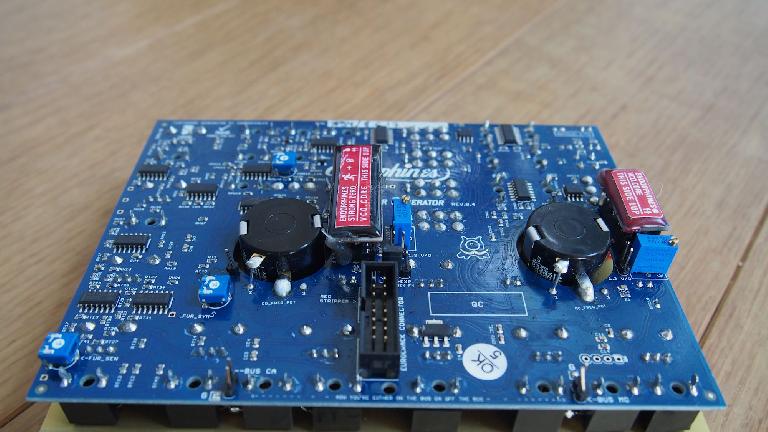 Through-zero means that the modulator is actually able to push the frequency of the oscillator through zero and into negative frequencies. This translates into a shift in phase at the zero crossing. Oscillators unable to pass through zero will simply have no output during that portion of the modulation. What this means is that through-zero modulation can produce a sort of ring mod effect because of the way the negative phase shifted frequencies blend with the positively modulated frequencies.

If my above explanation has left you scratching your head don’t worry. The important thing to understand is that the Furthrrrr Generator can perform through-zero linear frequency modulation to create crazy bell-like tones, but this is only one of the ways that the two oscillators interact. Furthermore, both oscillators have inputs for both exponential and linear frequency modulation along with a volt per octave input.

Here’s a comparison of exponential and linear frequency modulation using an LFO.

The left oscillator is the modulator, and it can be switched between high and low ranges to give it the option of functioning as an LFO. Both oscillators also have inputs for hard or soft sync. The right carrier oscillator has a three way switch to engage the use of the modulator as a hard or soft sync source. Hard sync restarts the cycle of a waveform when the sync source restarts its cycle, while soft sync causes the sync'ed waveform to switch direction. Each oscillator has a number of dedicated outputs for different waveforms, and the right has two identical main outputs identified by the red triangular all-seeing eye. 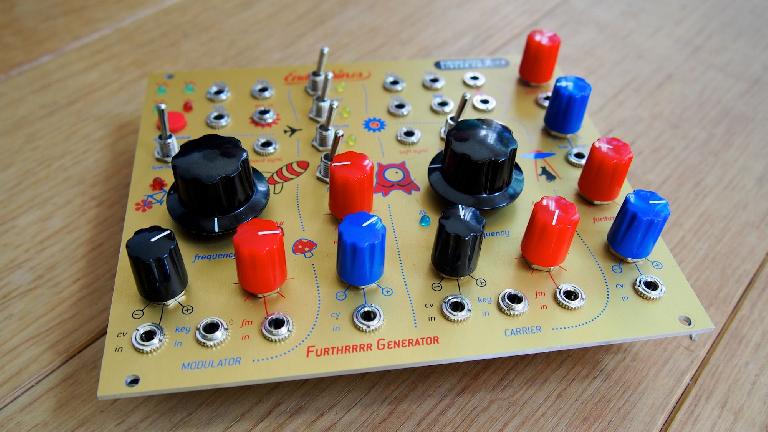 The right hand side of the module has a set of controls affecting the shape of the carrier oscillator. The first knob controls the balance between even and odd harmonics, the second sets the symmetry of harmonics, and the third is a wavefolder labelled furthrrrrrr. These controls let you transition from a pure sine wave into other more complex and spiky waveshapes.

The center column of switches and knobs sets up even more complex modulation relationships between the carrier and modulator. The switches set the type of modulation applied, and the knobs determine the amount, or “mood index”, and the level of CV modulation applied. This allows for any combination of balanced, amplitude, frequency or “furthrrrrrr” modulation to be applied. The balanced switch is for ring mod, which produces the sum and difference of the carrier and modulator.

Amplitude modulation means that the amplitude level of the carrier follows the frequency of the modulator. Lower rates will produce tremolo effects, but at higher rates this will change the waveshape resulting in effects similar to ring mod. The frequency modulation used by the middle mood section can be set either linear or exponential using jumpers on the back of the module. Lastly is the mysterious “furthrrrrrrr” modulation switch which provides wavefolding and also increases the intensity of the right side furthrrrrrr control.

Exploring the modulation of the mood types.

Of course the Furthrrrr Generator pairs nicely with the Grand Terminal for subtractive synthesis.

With all of this modulation and complexity, it becomes easy to create harsh dissonant noisy textures. Luckily Endorphin.es has provided a simple but elegant solution in what they call their “Looney Tuners”. Below each oscillator tuning knob is a set of two LEDs. Under the hood of the Furthrrrr Generator are a pair of digital tuners, and these LEDs are their simple visual interface. When both LEDs are lit, the oscillator is outputting an A, even if it is beyond the range of human hearing. This makes it much easier to rein in wild tones in order to produce something musical.

Whether or not you fully understand it, this arsenal of modulation options provides a deep rabbit hole of tonal possibilities, and it certainly rewards experimentation. If you enjoy playing around with sonic textures and gradually morphing simple tones into complex timbres and back, you’ll definitely enjoy this module.