This unique Eurorack module has Scott Riesterer all in a spin. Would he find it took his music to new heights, or brought it back down to earth? Let's hope the Grand Terminal was all plane sailing.

It takes only a glance at their website or any one of their products to realize that Endorphin.es has a distinct and unique sense of style. The panels of their modules are a striking golden yellow, with red, blue, and black knobs. They call themselves Endorphin.es Airways and list their company on Facebook as a cargo and freight company with the tagline “life is a trip”. The Grand Terminal fully embraces the retro airline aesthetic and even opts to label its features with thematic terminology. Endorphin.es was kind enough to lend me not only their Grand Terminal, but their Furthrrrr Generator and Shuttle Control as well. Therefore, this will be the first of a three part travelogue. So buckle your seatbelts ladies and gentlemen, we’re about to take off with Endorphin.es Airways.

The Grand Terminal is a multifunctional digital powerhouse in 26HP. It provides two filters with eight selectable types for each, two envelope generators, and eight selectable effect types. Additionally, the filters can be run in parallel, stereo, or serial configurations. Combining the Grand Terminal with the Furthrrrr Generator oscillators creates a full synth voice with two oscillators. Endorphin.es offers these two together as part of their preconfigured 84HP system called the Shuttle. It’s worth mentioning this because these units are intended to be part of their own ecosystem as well as standalone modules. 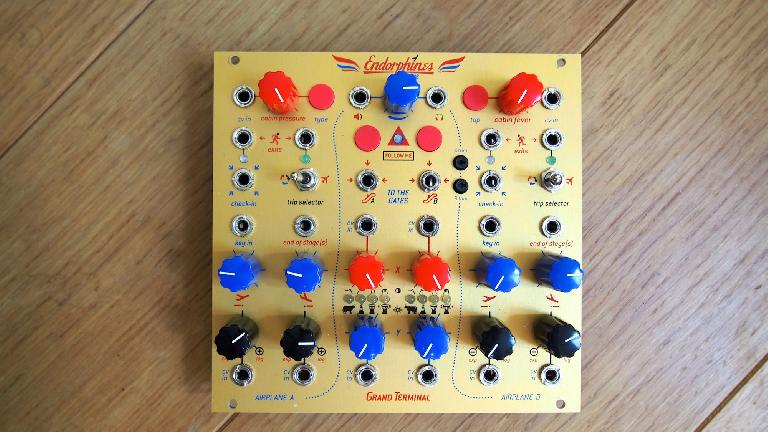 My maiden voyage with the Grand Terminal spent some time stuck on the tarmac before it was able to get airborne. To be honest, I couldn’t figure out where to plug in an input signal. My first guess was that “Check-In” must be the main audio input. After perusing the manual I learned that this was actually the gate input, and “To The Gates” was the audio input for the filters. The obtuse panel labels will undoubtedly direct users to consult the product manual, which may be frustrating for those eager to start patching. However, I realized this is probably intentional, considering their manual starts with “First things first RTFM”.

While most people loathe manuals, a better understanding of a product can be instrumental to its long term use and enjoyment. Furthermore, the Grand Terminal has enough complexity that it requires repeated referral to the manual during the first use or two (or four). Thankfully, Endorphin.es provides a thorough and educational manual along with a tutorial video.

Don’t let all this talk of manuals scare you off. The learning curve is not unduly steep, it’s just a matter of learning what refers to what, and how to use some of the features accessed by held or combined button presses. Endorphin.es has managed to pack a huge selection of features under the hood without any tedious menu diving. For example, underneath the two red knobs in the center are a set of eight LEDs. By using the two red buttons in the top center, you can toggle between the eight filter types for each filter. Because each filter has only four LEDs, they display brightly for the first four filters and dimly for the other four.

Pressing the top left red button toggles between the eight effects, which is also indicated by the filter LEDs momentarily after the button press. Four of the labels indicating selected filter types are obviously recognizable as low pass, high pass, band pass and comb. The other four are less obvious. The bull represents a MiniMoog-inspired transistor ladder filter, perhaps referring to the Taurus? A steaming beaker stands for the acid sound of the diode ladder filter made legendary by the Roland TB-303. Next are a couple djembes indicating Buchla style vactrol low pass gates, one of which is resonant. 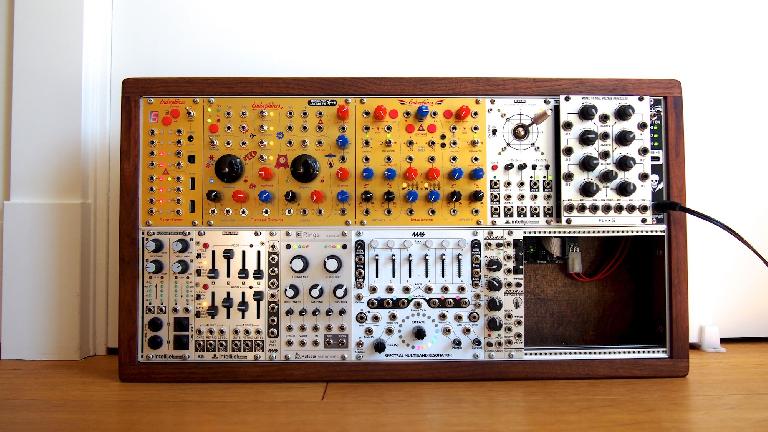 The eight effects are divided between five reverbs, two delays and a chorus. The Cabin Pressure knob provides the wet/dry balance, while Cabin Fever is contextually dependant, and changes the most relevant parameter of the selected effect. Each effect also has a secondary Cabin Fever parameter accessed by holding the tap button. Both Pressure and Fever have CV inputs, and there is a tap tempo button for syncing delay times. With the spring reverb selected, the tap button lets you virtually tap the spring tank for a spike of feedback. The effects provide a nice extra layer of depth and dimension to your sounds. You don’t have the same level of control or variety as more purpose-built multi-effects modules, but this is often the necessary trade-off of modules taking the swiss army knife approach.

Prepare For Take Off

The two Airplanes, as the envelope generators are called, take a more West Coast synthesis function generator approach. Rather than using a four stage ADSR shape, they simply have attack and decay controls, or in this case Takeoff and Landing. The two controls have bipolar knobs to control the attack and decay curves between linear, logarithmic, and exponential. A switch selects between three modes for the function generators. Non-stop flight provides a cycling LFO; short-haul flight is a transient focused attack-decay mode; lastly long-haul flight adds a sustain phase while gates are high.

Interestingly, the Airplanes have both bipolar and unipolar outputs - a welcome contrast to the usual positive and negative outputs often included on envelope generators. An end of stage output and CV inputs for attack and decay are provided, and consistent with the spirit of maximizing functionality, these can be re-configured with jumpers on the bottom of the module. This gives you the option of having end of stage outputs at the end of decay, attack, or both, and decide whether you want to modulate the attack and decay curves or rates. Personally, I’d love to see Endorphin.es make a module of just the airplanes, or even a single airplane, perhaps with CV inputs for both the attack and decay curves and rates, or separate end of attack and decay gate outputs. 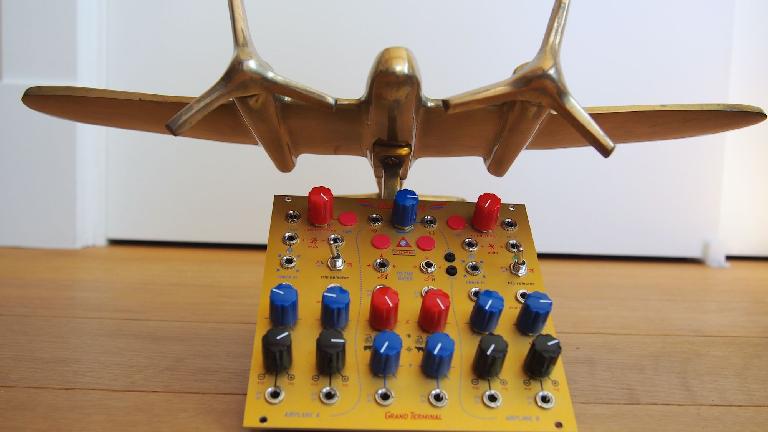 If you’re looking to put together a flexible system in a tight package, the Grand Terminal is definitely worth considering. Also, because this unit has both a modular level mono output, and a stereo line level output it can additionally provide a convenient final stage for your system and serve to make it more portable. Speaking of convenience, input A can also accept stereo signals from MP3 players if you are so inclined. There are a ton of clever features under the hood of this module that will encourage and reward long term use, but it’s also approachable enough that you can get to know it fairly quickly. That is, once you RTFM.