Ableton Certified Trainer, Noah Pred, finds out how Endless Studio, the cloud-connected looping instrument designed to reduce workflow and be the hub of the collaborative studio measures up.

When their mobile app arrived on the scene, Endlesss turned heads with its intuitive, jam-centric interface and innovative real-time remote collaboration. Expanding significantly on the potential of their mobile app, they’ve released a powerful desktop standalone and AU/VST3 plug-in that brings the best features of their design-first, cloud-based app directly into your favorite DAW – and in the age of social distancing, not a moment too soon. 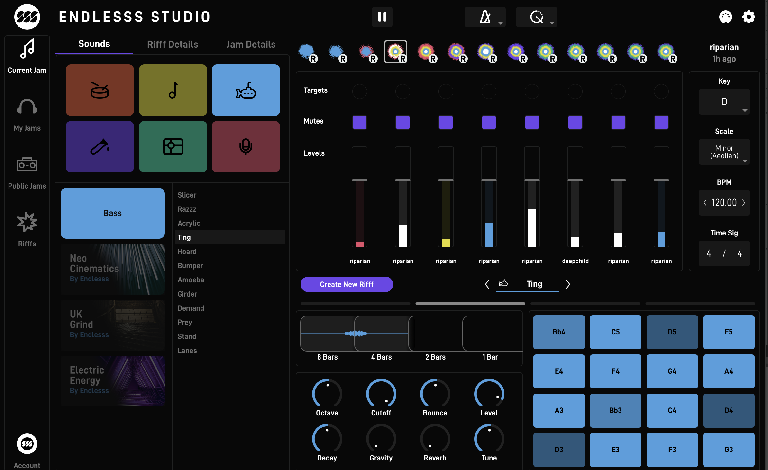 Endlesss at work with the Bass layer selected.

While the standalone version works wonderfully – with handy QWERTY keyboard control hardwired for instant playability even without a connected MIDI controller – most users purchasing Endlesss will likely want to use it in their DAW. It loads seamlessly in Live, receiving input from any connected MIDI controllers and integrating beautifully with custom LCD animations on Push 2. All controls are fully mappable directly in the plug-in, though not yet via DAW. 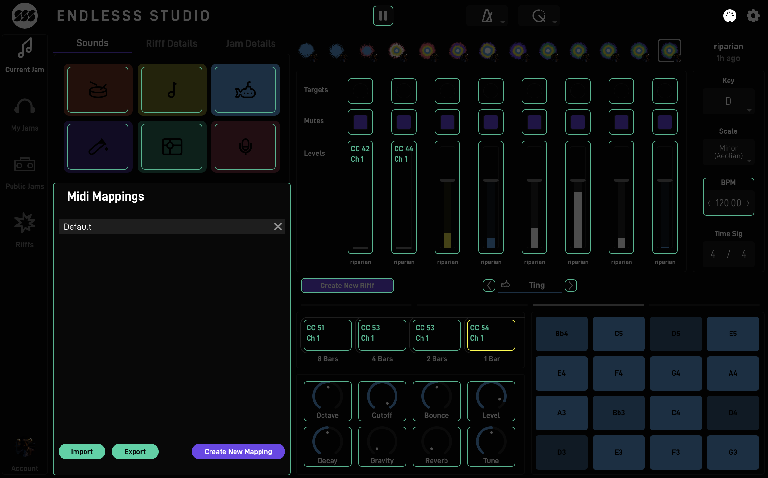 At its core, five instrument types allow for non-stop layering: Drums, Notes, Bass, Sampler, and recordable input. It’s constructed and advertised as a live looper, not a sequencer, so there’s not much to speak of in terms of editing – beyond effects, but more on that later. That said, whatever Endlesss may lack in post-recording flexibility, it more than makes up for in immediacy, which is where much of the fun and value in this unique tool lies.

Optional real-time input quantization yields highly musical results that, in advanced loop mode, can be captured as 1, 2, 4, or 8 bar loops. These are combined in a mixer that provides volume control and mutes. Above the mutes are the target toggles which determine either which track(s) will be recorded into a Sampler layer, or which tracks will be processed by the included effects – a sixth type of creative “layer” on offer. 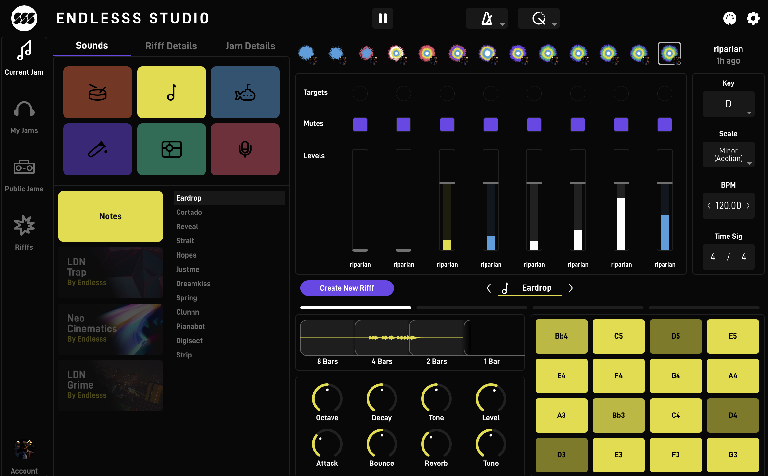 Rifffs are intelligently overdubbed and iterated anew when layering new notes or effects; if multiple layers are targeted simultaneously, they get merged together as a new layer when punching out of effect processing. Above the mixer – and in the Rifff Details view of the Current Jam area at left – is a full history of Rifffs, allowing you to travel back in time or simply undo anything you weren’t pleased with. Think of it like Photoshop’s Undo History, but for loop layering and processing instead.

While the Sampler layer is designed to intake loops from other layers to be repurposed and played as notes, recording audio into the input layer requires a bit of DAW configuration. In Live, you can create a new audio track set to receive the desired source, then route it to the track containing Endlesss Studio via Live’s In/Out routing matrix, or by setting that track as the Sidechain source in Endlesss Studio’s device toggle. 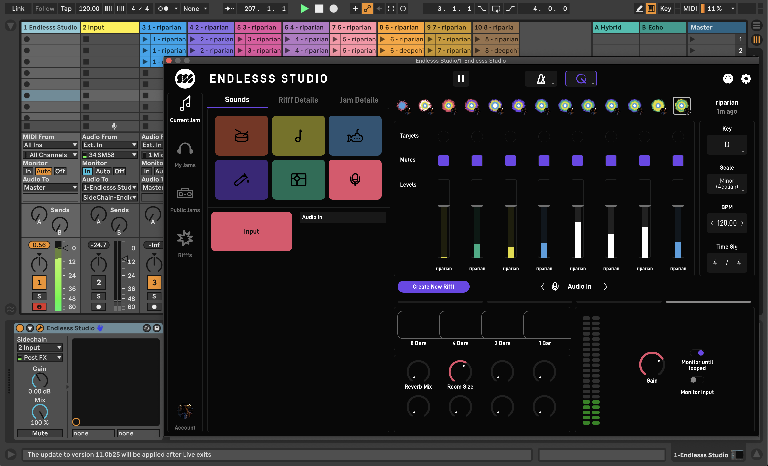 While each layer preset comes with enough parameters to customize it, the included instrument sounds are somewhat limited – though sure to expand significantly as Endlesss introduces more sound packs. This makes recording input from external sources even more important for producers, and obviously essential for musicians. Luckily it works quite well, especially with the Monitor Until Looped option that automatically disables monitoring once a loop is punched in.

Whether working with your own audio sources or the built-in instrument layers, effects layering is a huge factor in the fun of Endlesss, inviting instantaneous and drastic transformation via an XY pad – or with the Keymasher for glitchy, rhythmic effects – offering a variety of common and unusual effects alike. You can subtly tweak any elements that are just a bit too plain or dramatically twist your sound into unexplored dimensions rapidly and intuitively. 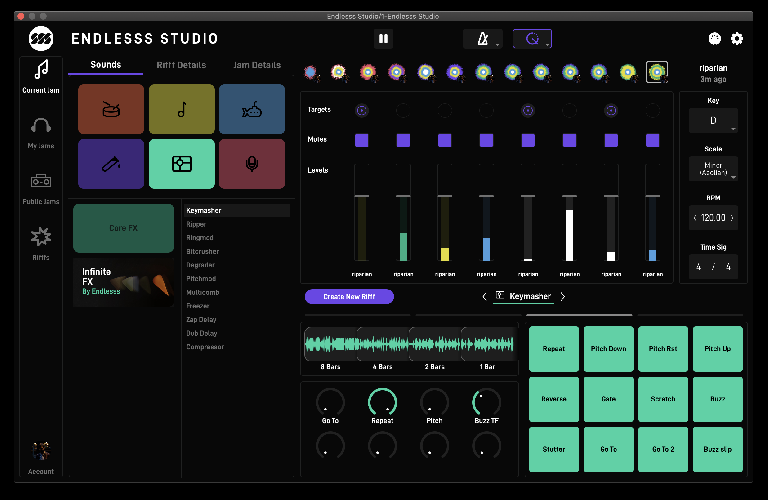 There may be a slight learning curve for producers used to more conventional sequencing approaches, but once you get a feel for the live looping approach, Endlesss proves addictive. Removing much of the friction presented by traditional DAWs in terms of fluidly fuelling musical ideas and jamming with friends, Endlesss not only invites happy accidents, but encourages those accidents to blossom into new creative pathways.

If you want to take your Endlesss ideas into your DAW, you can either export stems from a Rifff to your hard drive – or better yet, simply drag and drop them into your DAW. In Live, a Rifff’s layers are stacked by default on a single track, so hold down the Command key to drag each resulting clip onto separate tracks instead. 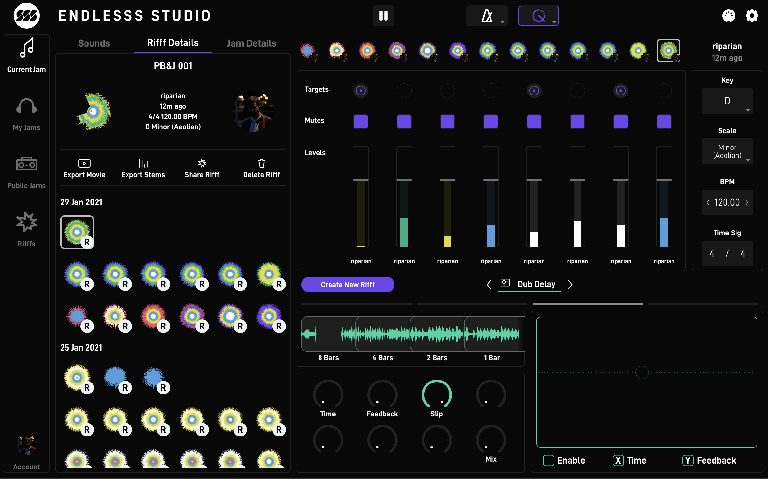 Because all your Rifffs are linked to your Endlesss account, they’re actually stored in the cloud. This means you need a reliable internet connection to use it meaningfully, but it also means you have incredibly seamless hand-off with the mobile version. You could start a new Rifff on your computer with your morning coffee, keep working with it during your commute to and from work via the mobile app, and then back on your computer in the evening – all without ever having to do any fiddling about whatsoever; the updated cloud-based jams automatically populate your account, no matter which platform you’re on. In this way, Endlesss is an ideal notepad for musical ideas – record them in the wild on the app, and when you load up Endlesss in your DAW, your sketches will be there waiting for you.

Crucially, Endlesss fosters collaboration. To work with others, just create a new Jam, public or private, and share the ensuing link with whoever you want to jump in on the session. I started a private Jam with a friend in Australia and over the course of a week, it was amazing to wake up and see what he’d done with it – and apparently vice versa..I imagine a more real-time private Jam would add another dimension entirely, remixing and adding layers in realtime. Integrated chat adds to both the utility and the fun factor here. By the end of the week, my friend had edited together a full 3-minute track from our Jam in his DAW and bounced it down. Brilliant.

Both of us happen to use Live as our primary DAW, but that’s not important; since Endlesss works as a plug-in, it allows fluid collaboration between producers using completely different DAWs more easily than any other tool I’m aware of. If you want to share a Rifff from a private jam, you can post it to the main Endlesss feed – or export a video directly from Endlesss to share on social media with ease. 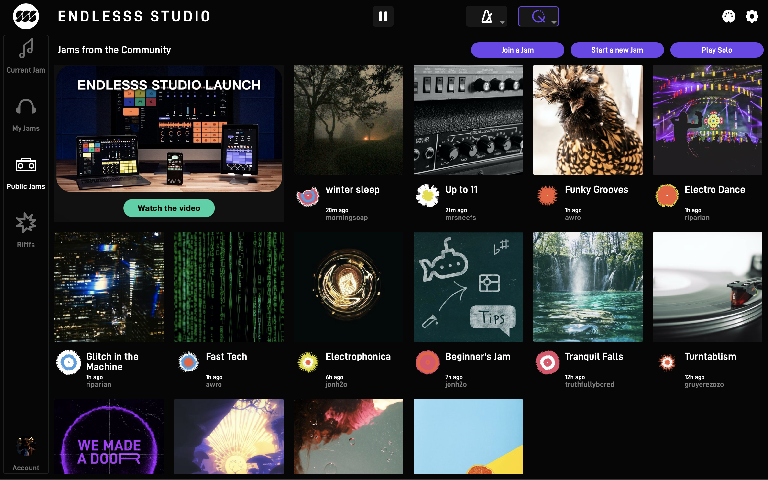 Endlesss Public Jams: explore, pick one, and dive in – or start your own.

And then of course there’s the Public Jams: a worldwide free-for-all where you can jump into the fray and contribute new layers or remix existing ones with effects. Just have a glance at the jam’s key, scale, time signature, and tempo, have a play around to see what you might add, and then dive in. The chat window provides a bit of context and possibly a way to make new friends if a Public Jam proves especially fruitful.

For now at least, surfing the Public Jams inspires a euphoric hope for technology’s potential largely missing since Web 1.0. Not unlike chat forums of old, but of course based around a visceral sonic element with a direct invitation to get involved, their truly unique social implementation feels downright utopian. There’s an argument to be made the fluid, decentralized nature of Endlesss’ Public Jams and short, looping shared Rifffs constitute new media formats unto themselves. There is a potential for abuse of these platforms, so I’ll be curious how everything gets moderated as the user community inevitably grows – but for now, it feels like a revelation. Public Rifffs, posted for feedback via likes, and inspiration for others.

Whether jamming and chatting privately with one or more friends as a new way of keeping in touch, actually working towards a finished product, or simply exploring the giddy expanse of Public Jams, these connective options feel essential for studio musicians currently locked down in isolation. Terms like “game-changer” get tossed around a bit too easily when it comes to technology, but the possibilities afforded by Endlesss – particularly the way it centers communal, participatory musical experience – feels like it has the potential for a paradigm shift in approaches to music production and play. It’s not hard to imagine a future where Endlesss is a primary musical interface for the next generation of beat-makers and collaborators, possibly even signalling new forms of social interactivity and co-creation far beyond the realm of music production.

Cons: No drag-and-drop sample import; no MIDI export; no triplet or swing quantization; no host automation; currently OS X only, though a Windows version is coming soon – that said, many of these are likely to be addressed sooner than later.