Language
Following on from their hardware compressor, Distressor, some 20 years ago, Empirical Labs have released a great, smooth sounding compressor plug-in with some clever features in Arouser.

Companies that have been making studio outboard for many years are increasingly starting to create software versions of some of their own studio gear. Sometimes it’s in collaboration with other companies and other times, as with Empirical Labs, it’s on their own. There are many reasons this is happening now. As well as the obvious benefits of being able to cater to people using software as well as hardware to do their mixing, computers are at a stage where they are powerful enough to be able to handle the levels of processing required by products such as these. It’s not that other products aren’t high quality, it’s that hardware manufacturers often have very high standards when it comes to putting their name to a software product.

Empirical Labs released the classic Distressor compressor two decades ago, and has apparently been asked about a software alternative for much of the intervening period. Arousor (I’ll refrain from making any jokes about the name) is an audio processing plug-in in all major formats that aims to bring the same creamy sound of the company’s outboard to those mixing in-the-box. It’s a Classic Knee Compressor that’s designed to be used across any channel in a project. 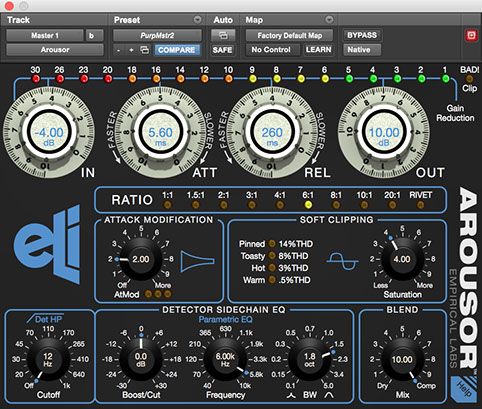 You’ll need an iLok 2 hardware key to run it, and also even to try the demo, which is a little limiting. This is presumably out of a fear of piracy which is understandable, though it will limit the number of people who are able to test the product and by extension, be persuaded to buy it. There are 18 presets in the current version though Empirical Labs says that many changes will be introduced to the plug-in in future updates, even things such as major changes to the interface.

As it is, the look is modelled on the company’s hardware and is pretty easy to follow. The large white dials also allow numerical input for fine-grained control, and there are hard-to-miss In, Out, Attack and Release controls as well as a level meter, clipping indicator and Ratio display. A clever Broadband Saturator allows greater control over the peaks in the Soft Clipping section and there’s an Attack Modification Control section that changes the shape of the initial attack for another layer of sound shaping. Sidechain EQ is also available with HP and BP controls as well as a blend control to control how much compressed signal is mixed with the dry sound.

Tested across a range of tracks in various projects, Arousor performed well, giving a consistently smooth approach to compression. The interface being modelled on hardware does help you quickly find your way around and the developer’s claim that it’s “almost impossible to get a bad sound”, while slightly hyperbolic, is fairly close to the truth. As long as you’re using sensible settings, Arouser sounds cool on everything you send through it. It’s not cheap and as such might be more appealing to producers working commercially, but if you can stretch to the price it’s an excellent software compressor.

Cons: Costly for bedroom producers. Needs iLok 2 even to run the demo.