Language
Looking for a customizable solo cello/soli Kontakt library that is expressive and can fit in a great number of musical settings? Jay Asher finds out whether Embertone's Blakus Cello makes the grade.

My last review was of Kirk Hunter Studios Spotlight Strings, which I described as well worth your consideration and now my personal “go to.” Well with the release of the Embertone Blakus Cello (as well as a promised free update to the Embertone Friedlander Violin that will incorporate some of the added features of the cello) the decision on which I will reach for first just got more complicated.

In short, this instrument sounds terrific. It is called the Blakus Cello because it was based on a freebie cello instrument Australian composer/cellist Blake Robinson made available that a lot of us fell in love with. It was much simpler and less full-featured, but the Embertone guys partnered up with Blake and now we have this version.

The Embertone Blakus Cello is a Kontakt library that comes with the free Kontakt 5 Player so while it will obviously work with the full version of Kontakt 5, it does not require it. (5.2.1 or newer),

There are two versions, one with 24-bit samples and one with 16-bit samples, priced as $125 and $120 US respectively. While the instrument is somewhat CPU intensive, any reasonably new computer with a decent amount of RAM, will handle it just fine. Those with less powerful systems should opt for the 16-bit samples. I could not hear any significant difference personally and Embertone actually recommends it for all users.

The Embertone Blakus Cello gives over 6,000 samples. It has true legato, bow changes and slurs, speed-controlled portamentos, staccatos with CC speed control, control over bow noise, and all the articulations you would expect, like tremolo, pizzicato, sul ponticello and sordino, as well as an Ensemble mode. All of these are accessible on the main page of the GUI (shown here in Pic 1). 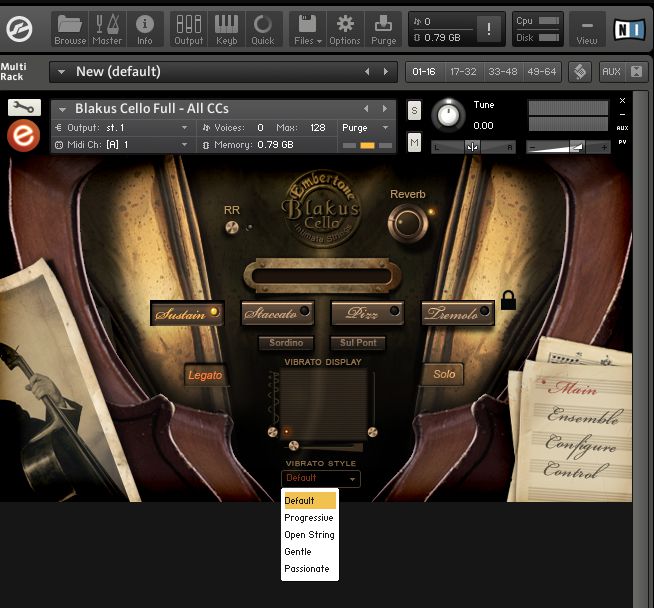 This is another library that gives you tremendous customizability. There are 3 basic patches: one with all articulations controlled by CCs; another with all controlled by mod wheel, and my favorite, a MW + Exp patch that controls vibrato with the mod wheel and dynamics with CC 11 (Expression), which I use a pedal for. There are low RAM versions of all three of these for those users who are RAM-challenged. There is also a fourth patch that is optimized for the Touch OSC app for the iPad.

There is of course a built-in convolution reverb, which I turn off in any sample library because I always want to send to a reverb on a bus, but it sounds fine.

The Ensemble mode that you see in Pic 2 allows you to click on/off additional players, up to 8 players in total.  As you can see, you can control intonation tightness variants, with a randomizing option and you can control the panning width. This keeps this from simply sounding like an instrument with an ensemble plug-in and more like a real section. Even more intriguing is the “Combine Transitions” feature, which combines slurs and bow change legatos, to create an even more human factor. 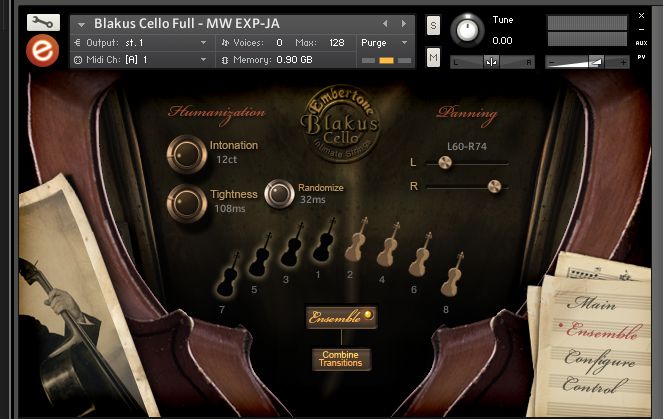 The Configure page gives you lots of choices about how this baby behaves when you play it. 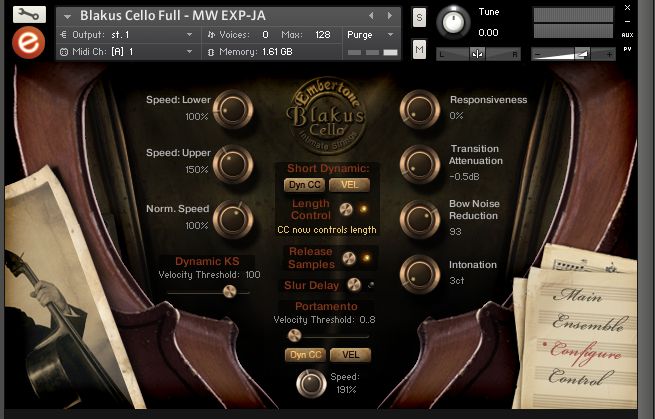 Articulations can be controlled by keyswitches as you would expect, but you can decide whether they are set to “Dynamic Keyswitch.” When this choice is selected, high-velocity attacks cause locked articulation changes whole, low velocity attacks create momentary keyswitches. It is a very musical way to play.

Staccato dynamics can be controlled either by velocity or MIDI CC. Release samples can be turned off for a “natural” decay or turned off. You can add Slur Delay for more consistency between bow change and slurs, as I do, or not. Portamento speed is controlled by velocity within a Portamento Threshold, where you set the highest velocity that will trigger a portamento transition. So far, I have not found it necessary to change the default. You do however have the option to control portamento speed with CC 80. There are knobs for the Speed Range to affect transitions between legato notes; a Normal Speed to lengthen the sustain following a transition; and Intonation Knob to control the randomness of pitch, which when set to more drastic levels can yield some interesting 20th century serial-style effects; Bow Noise Reduction, which EQs the frequencies that occur with real bow noise.

Perhaps the knob that will require the most attention from a new user is the Responsiveness knob. Developing a real-time playing technique for any library featuring recorded legato intervals, called by this library and most others “true legato”, can be challenging. Bumping up the responsiveness makes the playing a little easier perhaps, but also does detract from the lag that real cellists deal with. In tandem with the Speed Control, however, you can find a setting that is comfortable specifically for you.

Looking back at Pic 1, you can see there are several presets for vibrato. These are extremely useful for when you want to play very emotionally or more coolly and makes the Blakus Cello fit in a great number of musical passages. Like Kirk Hunter's Spotlight Strings, it is LFO vibrato rather than recorded vibrato. There are users who reflexively think “synth” with this and as I said in my review of that other library, I don't buy it. This methodology gives you a great range of flexibility and if programmed well, as it is here, it yields a highly musical vibrato.

These presets interact with the vibrato settings for speed, color, amplitude, and pitch on the Control page, which also gives you, well, control over other aspects of the instrument. Also, it should be noted that if your keyboard controller has aftertouch, vibrato can be realized using that. 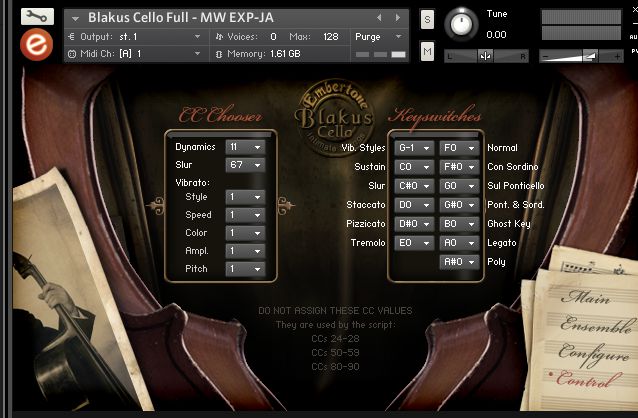 Here in my favorite Modwheel +Exp patch you can choose the MIDI CC for controlling velocity and for me, the single most important setting for controlling slurs/sustains. I was having a difficult time playing in a way that felt intuitive with the slurs being a momentary keyswitch, until Alex Davis, one of the developers, pointed out to me that I could set it to CC 64 so that holding down the sustain pedal would allow me to slur easily from note to note. This immediately changed my relationship with the instrument for the better. I am now getting very comfortable playing it.

While the CC assignments are all configurable, there are several that are hardwired to the instrument's functionality that you will NOT want to assign to anything else. They are CCs 24-28, 50-59, and 80-90. That obviously still leaves you with plenty to choose from.

I think that what makes the Embertone Blakus Cello so satisfying to play however, is the way the sustained notes behave in the Sustain Mode on the first page that you see again in the center of Pic 5. 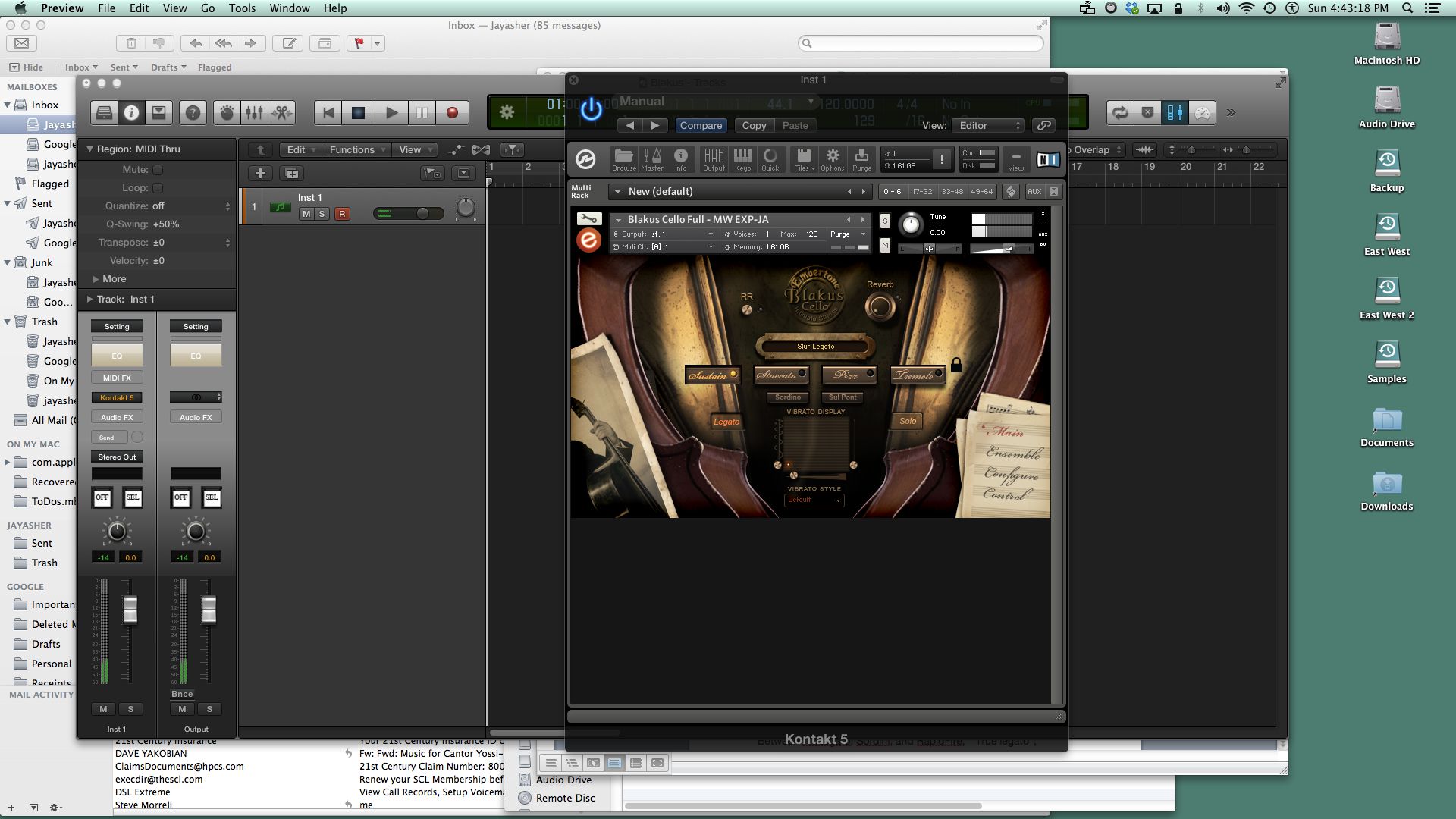 The Poly mode turns off True Legato and allows you to play more than one note for double-stops or when playing the Ensemble.

Finally, let me say that I had the pleasure of meeting Alex and his partner Jonathan at this year's NAMM show, and they are really good guys, deeply committed to what they are doing and passionate about it. I look forward to the viola and the updated Friedlander Violin.