Language
Elektron announcement of Analog Heat was met with rejoicing and some uncertainty. Timo Preece digs deep below the analog distortion and saturation for a clearer picture of what makes it so versatile.

Like many others, I’m a huge fan of Elektron gear and delighted to hear about the Analog Heat as an introduction to their outboard analog processing units. The small, portable footprint of this stereo analog sound processor, combined with its ability to sync up via Overbridge to your DAW of choice, makes for a deliciously flexible sound sculpting smorgasbord.

Having spent several weeks deeply exploring the Analog Heat’s versatile capabilities, as a review, I’ve come up with several enticing examples of less obvious ways it can be employed for sound design, mixing and performance. 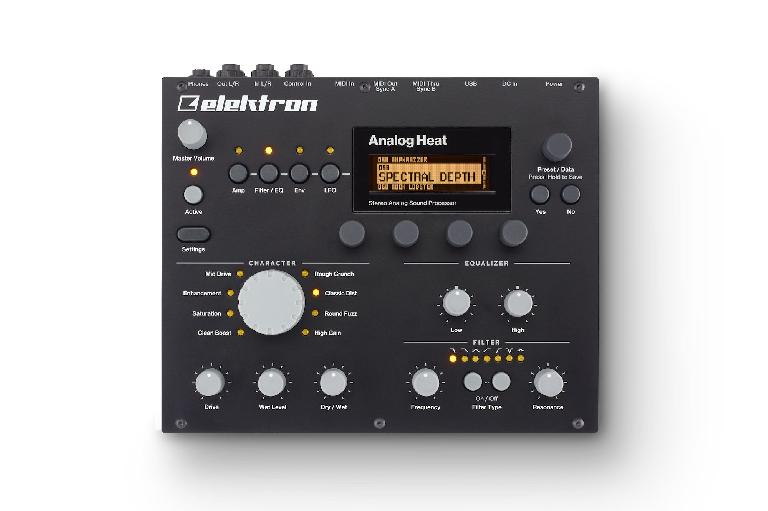 Analog Heat has eight effect circuits offering a wide variety of saturation, drive and distortion possibilities ranging from subtle to brutal. In the development stages, Elektron researched various ways that audio has been distorted throughout history, such as tape emulation, tube saturation, driving old mixers, boutique hardware and so on to design and shape Analog Heat’s circuits. Through my test sessions, I found all circuits characteristically unique and even when driven quite extreme, remain intact and pleasing.

According to the user manual, Elektron provides the following breakdown:

Use Clean Boost and Saturation to add warmth and additional harmonics to virtual instruments for added dimension. By inserting the Overbridge plugin alongside an Ableton Live Operator instrument, I was able to take a simple sine wave and extort a richer bass frequency containing extended harmonic content.

Here’s a listening example, first with Analog Heat bypassed and then with some added saturation and a healthy dose of drive:

Taking the same constant sine tone from Operator, I’ve added some convincing sonic gesticulation by routing a reverse saw pulse wave via the LFO to boost the Round Fuzz circuit’s Drive amount, while simultaneously modulating the Filter Cutoff. 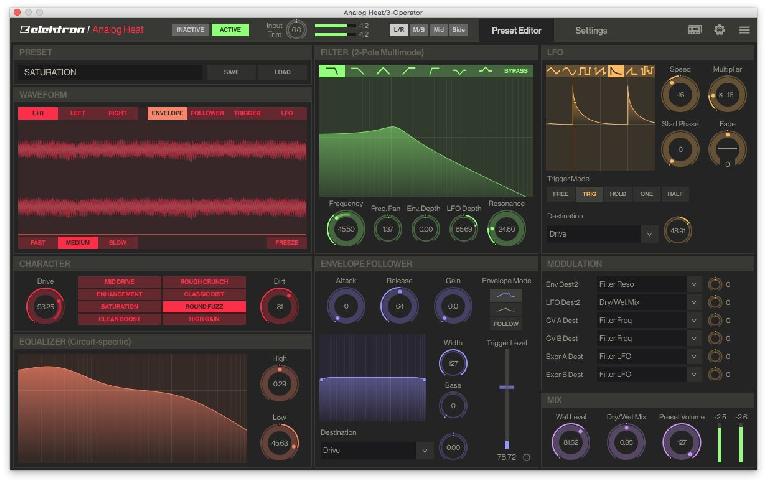 For highly dynamic material with defined transients, such as drums or percussion, spice it up by using the Envelope Follower to additionally modulate Analog Heat’s parameters. “The envelope follower is used to detect the amplitude variations of the incoming audio signal to produce a control signal (envelope) that resembles those variations. This control signal can be routed to modulate the filter and two other modulation destinations.”

Choose one of the three envelope modes, set the Trigger Level’s threshold and adjust the sub parameters (attack, release, width, base, modulation destination/amount) to dial in what gets modulated and to what extent.

In this example, I’m modulating the accented hits by routing the Envelope Follower to boost the Drive amount and Filter Cutoff Frequency. 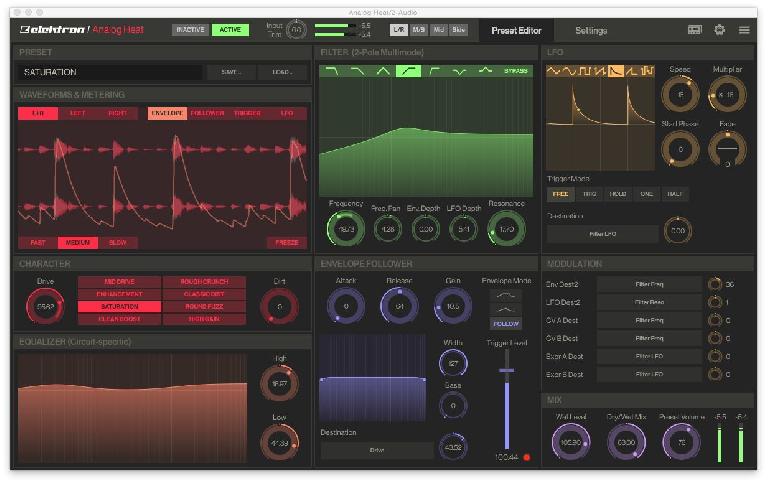 How Much Do You Want?

The Dry/Wet control balances the mix between the clean and processed signal… a superb choice when parallel processing or wanting a bit of effect but not needing the full whammy. Using the Clean Boost Circuit and a smidgen of wet adds warm silky sheen and airiness to pads, synth lines, drones or most anything else you send it. I often incorporate this technique for sound design and mixing alike to breathe additional dimension and life into my production.

To illustrate, I’ve used the Clean Boost circuit, a tad bit wet with slight LFO modulation on the Cutoff, to enhance the top end of an Output Exhale voice pad. 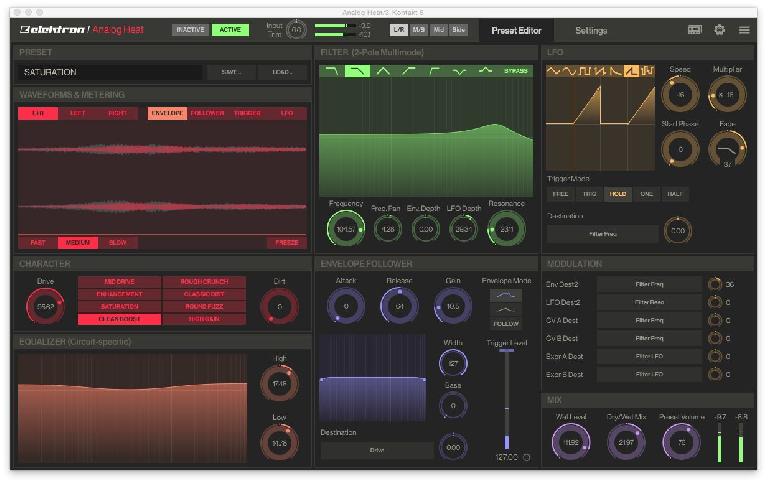 Additionally, there is a Wet parameter to set the amount of signal coming from the effect before the Dry/Wet mix. As an effect or for monitoring purposes, this is a fantastic feature as it allows users to better balance active and inactive (bypassed) levels.

When it comes to monitoring, we often perceive louder as better, even if it’s not actually the case. To better assess what the effects are doing (good, bad or ugly), practice dictates dialing the processed signal to the same loudness as it is bypassed. This is quite easily done by reducing the Wet Level by the same amount that you’re boosting. You can then audition the processed/unprocessed signal by clicking the Active/Inactive buttons accordingly.

There are times you might take a different route, such as when using the Analog Heat as a dramatic boosting effect. To kick in a special moment in your performance or production, slap this bad boy on a master or group bus. To take things to the next level, keep the Analog Heat in its inactive state and (right after the break) punch it active with a bit of drive and volume boost to send the crowd wild.

Along with any of the seven filter types, Dirt can be used to additionally or independently drive incoming signal. Whereas Drive sets the gain level to the distortion circuit, the Dirt parameter sets the amount of input to the filter. I find adding Dirt without boosting the Drive provides subtler amounts of distortion… useful when wanting to add character that’s not obviously overdriven.

Users can further shape sound sources with the 2-band adaptable stereo analog EQ. The Low and High controls set how the low and high-end ranges are boosted or attenuated. The EQ is fixed but depending on the selected circuit-type, settings vary in slightly different ways… tailor-made to suit the characteristics of the selected circuit.

Another clever addition, Frequency Pan adjusts the cutoff frequency of the filter and pans its behavior between the Left and Right channels. By modulating Frequency Pan via the LFO, the Analog Heat achieves effects similar to that of a classic stereo phaser pedal. Set the LFO’s wave shape to square for tremolo style panning effects.

As mentioned briefly, the Analog Heat can be used to enhance elements of a mix. I often use saturation and subtle harmonic distortion to help parts better mesh together and/or to provide textural contrast.

Several benefits of analog saturation include:

I’ve created another listening example where the Clean Boost circuit enhances drums. The loop starts with the effect bypassed and then kicks in after 2 bars.

Note: Be careful as Saturation can also make things sound duller and less defined. especially if you’re putting it across entire groups or the master bus. While saturation might sound great while designing individual sounds, it might also muddy up the mix if you’re using too much of it.

After some tests and a chat with Elektron support, I found that the Analog Heat is best routed as an insert. If used as an auxiliary effect, the latency was too noticeable even at low buffer settings (64 samples with plugin delay compensation). The sonic results ranged from dramatically flanged to phase cancelled representations… some of which were quite interesting despite not being the intended effect.

Instead to blend, users can insert the effect onto a specific track or group track and adjust the Dry/Wet level. Otherwise, if used on a return channel, record the processed audio and manually adjust to time align with the unprocessed counterpart.

Elektron Analog Heat rear view.
Note: Overbridge plugins do not support offline (non-real-time) rendering/freezing of the arrangement. Examples of DAWs that support real-time rendering well are Cubase and Renoise. Most other DAWs only support offline rendering. This is not a bug but a feature of its analog architecture.

Like with many fineries, perfection takes time. The Analog Heat without the Overbridge was rock solid as an effects processor and synched perfectly when receiving MIDI clock. Overbridge 1.15.0, however, was less stable and glitchy on my mid 2014 MacBook Pro i7 core running Mac OS 10.10.5 (with and without my RME Fireface sound card).

During my Overbridge test process, I ran into sync issues, audio drop outs, high-pitched screech noises and additional latency. Often I encountered an unresponsive unit that I would need to address by reinserting the USB connection. Since I was unable to test across multiple operating systems and platforms, it’s very well possible that the issues are limited to my particular setup or OS.

After speaking to Elektron support, they indicated that there were known issues with OS X and they recommend updating to macOS Sierra. They’ve always been quite good at following up on improving their products and assured me that they are working on a fix as an update. If it’s not dialed in yet, I have faith that it will be at some point, hopefully in the not so distant future.

Note: There is a rather insightful Elektronauts forum where users share their experiences. If you’re concerned, check out: OB 1.15.0 Issues.

All in all, I find the Analog Heat a valuable addition to my arsenal. Its compact size makes it a portable traveling companion for performances, and its flexible functionality a powerful production tool. I’m a fanatic for effect processors and the Analog Heat stands up to some of my more expensive boutique units that have less built-in modulation capabilities and versatile character.  Moving forward, I hope Elektron continues this route and produces more of these riveting analog hardware effects.

latency
Hi- Would you be willing to expand on the use the heat "routed as an insert" comment. I'm finding the latency unbearable in Ableton and am trying to figure out how to improve it. Not sure what it means to route it as an insert though. Thanks!!