Language
The developers of Elastic Drums are relentless with their updates, constantly adding new features. We road tested the new version 2.0 and found some unexpected and very welcome additions.

The iOS App Store has in many ways been a fantastic leveller in that it allows independent developers to get their products onto the market without needing a huge and costly marketing machine behind them. One of the best examples of this is Elastic Drums, developed by a very small team but wildly popular with iPad and iPhone users. Regularly updated with new features, it’s affordable as a first time purchase and the latest 2.0 update is free for all existing users.

So what is it?

Before we dive into what’s new, a brief look at what the app is all about. At its heart, Elastic Drums is a drum synthesizer and sequencer, albeit one that now arguably goes beyond that simple description. There are six channels of synthesized sounds with a choice of 12 different percussion synth engines covering different types of sound. So you mix up kicks, snares, hats and a variety of other tones that also provide basses, drones, effects and the like. There are a bunch of effects with X/Y control pads, editable automation throughout the app, and a comprehensive set of synth controls for each engine meaning the sounds are infinitely malleable. 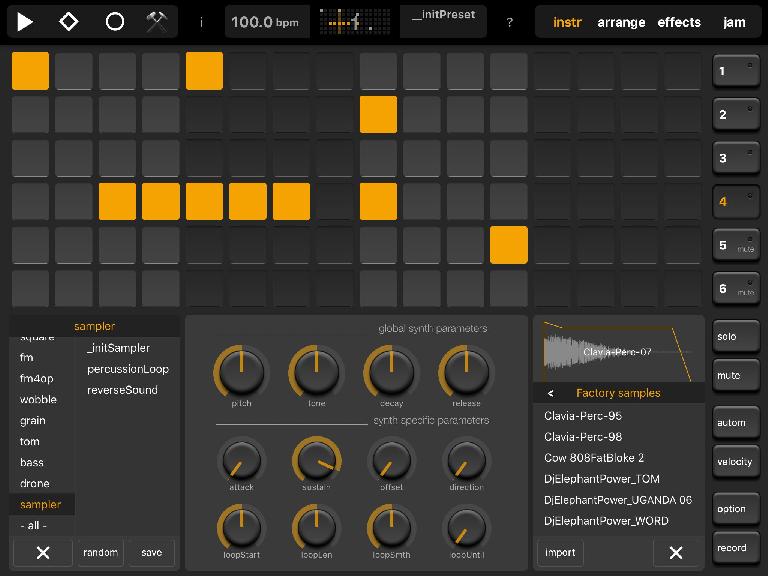 The idea behind Elastic Drums is that it’s supposed to be quick and easy to pick up and play, and this is certainly true. The main screen contains the core controls for making patterns, with a sequencer grid, six synth engine selection buttons along the right edge and for each one, a sound selection and tweaking section that appears when tapped. Sounds can be swapped out for any of the preset synth patches or a sample, with the ability to import your own samples to create custom kits available via a $5 in-app purchase.

Any sound can be tweaked using the Global and Specific control sections, and a Randomize button inputs settings for you to help with inspiration. Individual sounds and whole setups can of course be saved and there’s a great selection of preset sounds and patterns supplied, with some add-on sound packs also available for purchase. The sequencer is polyrhythmic which means that each of the six channels can be set up individually with regard to the number of steps and playback delay. So it’s possible to have very complex patterns where different channels play back using different settings. You can also access randomization and copy / paste tools for individual or multiple elements by tapping the Option button. 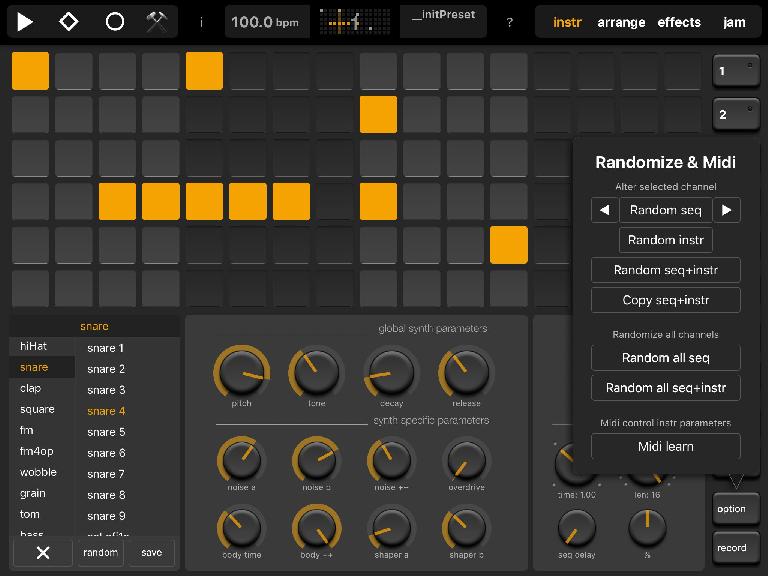 Randomizing all kinds of parameters

There’s also a Note Record mode that lets you use six onscreen drum pads or a connected MIDI device to record patterns, which is a nice touch as some people find it more natural not to have to tap notes into a grid. 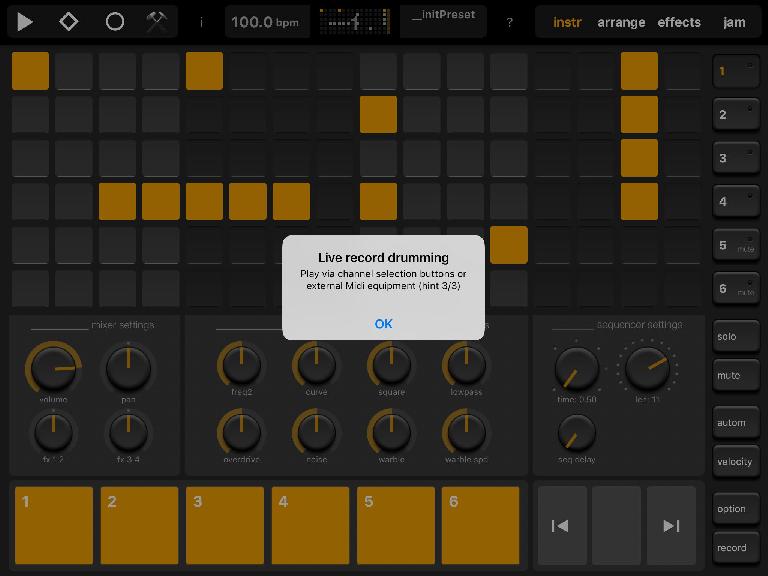 Live recording with the onscreen pads

Jump into the Arrange section and you can create songs by linking patterns together. Here you’ll also find a track mixer with FX sends and if you proceed to the FX section, four slots are available, each with multiple effect types, an X/Y pad and automation so you can record parameter changes. MIDI learn is also available throughout the app. The Jam section provides you with a way to perform live with your patterns, freezing and stuttering playback, triggering instruments and so on.

All of this is pretty easy to figure out and work with, and the app does have tooltips to help you out. The sounds are very cool and tweaking and randomizing is a breeze even if you’re not a synthesis expert. Creating patterns that sound good shouldn’t present much of a problem at all even for beginners. Since you’re working with synth engines, you can add bleeps, tones, drones and more, it’s not just for making drum sounds. So apart from lots of minor enhancements, what’s new in version 2.0?

Many of the new features relate to getting data in and out of the app, which is somewhere a lot of otherwise advanced music apps can fall short. For a start there’s Ableton Live Set Export, to go along with the Ableton Link capabilities already present. It’s Audiobus 3-ready for linking to other apps, and there are various workflow tweaks and enhancements. When it comes to recording audio you now have more options. As well as being able to record patterns as stereo files or individual channels, you can output whole songs, upload to Soundcloud or Audioshare and export a zip file of your audio to iCloud Drive. Essentially it’s now really easy to get audio files rendered out of the app for use in other DAWs. Interestingly it’s also now possible to send zip files of samples TO the app via something like an email, with an option to open them in the app. 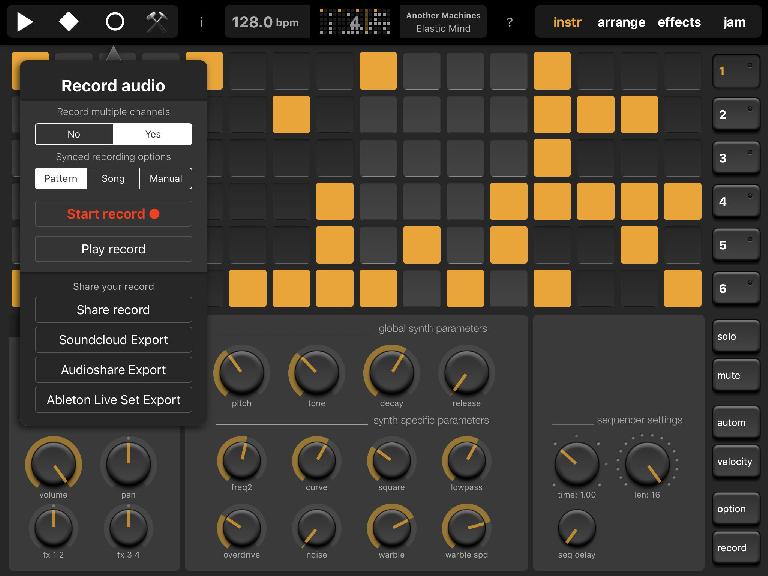 Expanded options for recording data as audio and sending it elsewhere.

MIDI export is handled either via the Ableton Set Export option or the comprehensive MIDI sync options available in the Settings menu where you can control MIDI clocking, channels, devices and more.

Elastic Drums crams a lot of functionality into a package that still remains hugely approachable for new users. In truth it’s gained so many tools that the name doesn’t quite do it justice any more (if they end up changing it to ED Studio, I want a credit!) But seriously, with a bunch of synth engines, polyrhythmic sequencer, lots of effects with X/Y pad control, editable automation and velocity and a Jam mode for live performance, it’s far more capable than the description “drum synth” suggests. 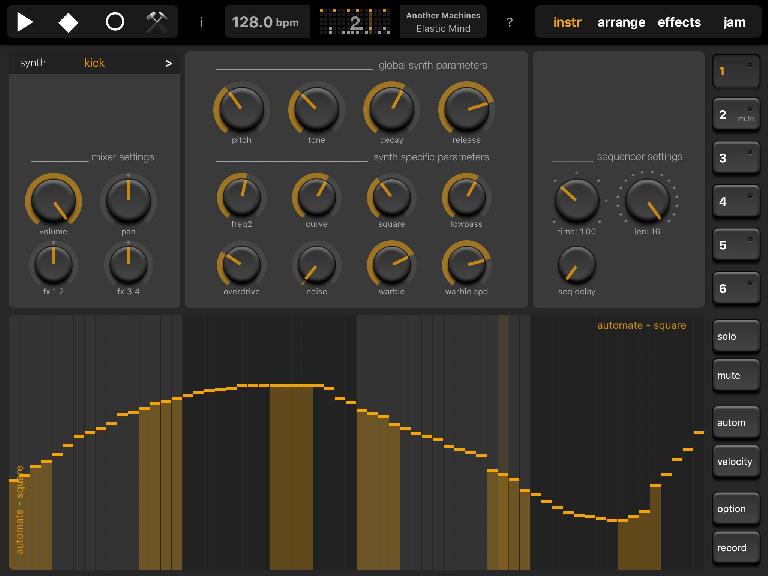 Factor in the expanded abilities regarding printing patterns, tracks and songs to audio and then exporting them for use in other apps or to Soundcloud, and sample import (via IAP) by email or other methods, not forgetting Ableton Live Set Export, and you have a plethora of ways to get your projects, mixes or songs out of Elastic Drums. There’s no sample editing available inside the app at present which is a bit of a shame given that the synth engines are very tweakable, but this is technically not the hardest thing in the world to add so I’d hope to see the developers do so at some point. Additions like that plus whatever they must have cooking for future updates would surely cement Elastic Drums as a vital part of your beat-making arsenal for years to come.

Cons: Sample import is an add-on purchase. No sample editing capabilities – yet.