Seriously, Jay? A review of another parametric bell EQ? Don't they all sound the same? Without opening that can of worms that I addressed in a previous article, let us agree that as a working hypothesis, all digital parametric EQs can be made to achieve pretty much the same results as they all use the same math. That said, simply reaching for a band and either boosting or attenuating will achieve a different sound from EQ to EQ because they have different curves, slopes, filters etc. so some EQs will get you to where you want to go faster and more enjoyably than others for specific tasks. 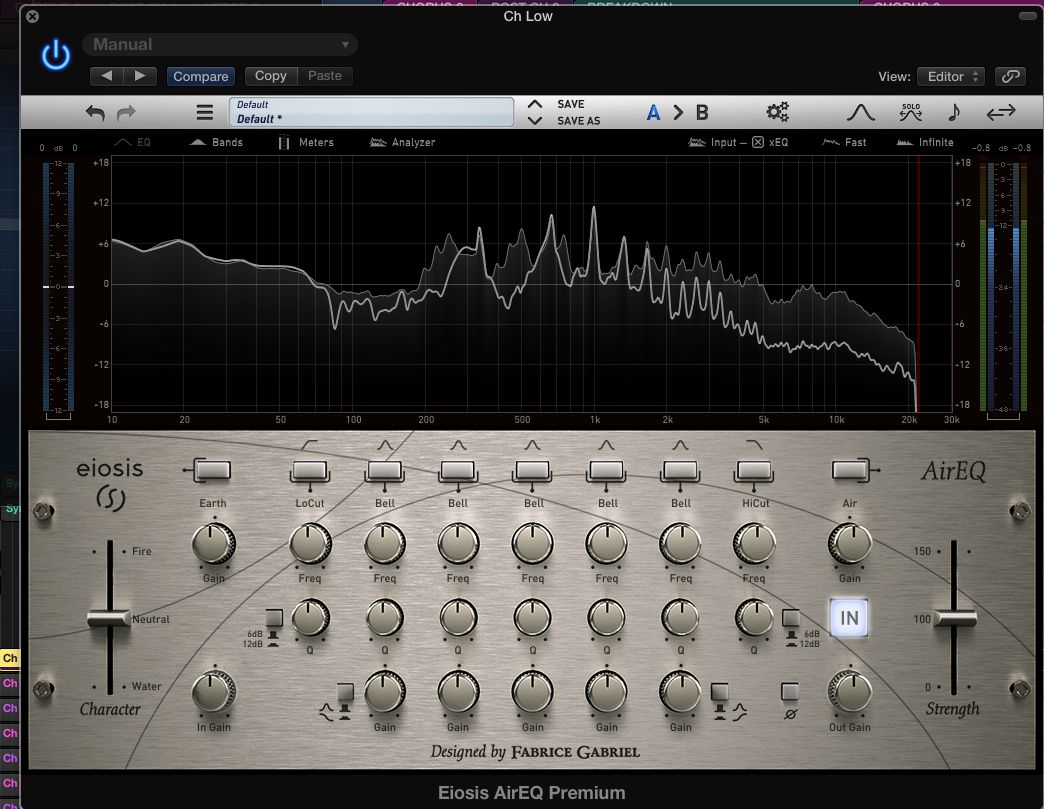 Now please understand that I have a lot of EQ plug-ins and many of them are terrific so I certainly have not found myself lacking in that department. Also, there are many that I do not own that others have told me they love using. So when I ran into an engineer friend, Joshua Aaron, at AES in Los Angeles a few months ago and he dragged me over to the Eiosis booth where the designer, Fabrice Gabriel, was showing the new AirEQ Premium, let's just say I was not all that excited at the prospect. But I have great respect for Josh and I am aware that Fabrice has designed some highly regarded plug-ins for Steven Slate so along I went. And I was pleasantly surprised by what I heard and saw.

So what makes this EQ different? In Pic 1 you see the main GUI. The first elements that were called to my attention were the Character settings: Fire, Neutral and Water, and the Air and Earth buttons. My gut reaction is to roll my eyes as they screams “marketing gimmick” to me. However, when I listened I found that these are really useful and very musical. The Air button allows you to add high frequencies that do indeed add air. And the Earth button gives you some really nice low end. When applied with Neutral character, they sound like a lot of other parametric EQs, but with the Water setting, you get a really smooth and transparent effect that is really pleasing to the ear. When set to Fire the sound becomes more focused, kind of punchy. A really nice bonus is that the Character choices can either be global to the instance or band specific, giving you the ability to have a tight and punchy low end, not at all boomy, with a more diffused high end.

Like all parametric EQs, it uses bells rather than shelves, which gives you more control over the individual frequency bands. It has an analyzer that can be either displayed or hidden with the ability to compare the incoming frequencies with the processed frequencies. It is quite easy to restore the settings globally, or individually and you can also easily create your own default.

What I found really interesting and musical to work with in AirEQ is the relationship between the Q (which determines how narrow or wide an EQ band is) and the gain. Usually they are independent, but Fabrice has a different take on this that I quite like, although it will take getting a little used to. He has linked the two so that as the Q gets more steep, the gain raises and vice versa. This allows you to adjust the Q without being distracted by large variations in volume. It makes the process much easier and more musical for me.

All the knobs have coarse movement by default but by simply holding a modifier key you can make fine adjustments or you can set it to fine adjustment by default. There is a “Frequency Finder” functionality that allows you to boost a band with a tight Q and simultaneously sweep with the frequency knob. You can toggle between this and band solo, set a specific amount of gain to be applied and set either a maximum Q value or use the original.

The only feature I miss in the AirEQ Premium is the ability to move frequencies around in the display by grabbing and dragging them. Adjusting the bands is all controlled by the knobs, although you can double-click on the numbers and type in values. Fabrice was showing a prototype of a very nice looking and well built controller at AES, but it seems like it will be on the pricey side to control a single plug-in. However Fabrice is very open to having it control other plug-ins as well as is hoping other developers will be interested, which obviously would go a long way to justifying the purchase of it. The target release date is the end of 2014. See Pic 3.

And now we come to one of my favorite features. In Pic 4 notice that I have the option to see the band frequencies I am adjusting as pitches (or octaves). As a composer/arranger who has learned to mix, rather than someone who is primarily an engineer, I love this feature, especially when working with vocals. It makes understanding what the effect will be really intuitive compared to just numbers.

The Eiosis AirEQ Premium is priced at $149, with an introductory price of $99 until December 1. As I said, you can request a thirty-day free trial.

Before purchasing or running the demo, you should have an iLok 2 Dongle and an active iLok account on www.iLok.com

The minimum hardware requirements are: