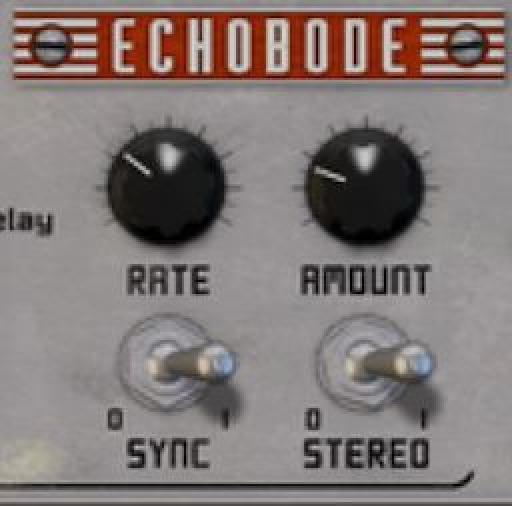 Review: Echobode RE by Sonic Charge

Language
Does Sonic Charge's Echobode Rack Extension for Propellerhead Reason give you all the echo/delay you'll ever need? G. W. Childs puts this plug-in to the test repeatedly.

Reason has not had many delay/echo devices over the last several years. In recent memory, there has been 'The Echo' and the pitch shifting and delay device, 'Polar'. But, for the most part, since Rack Extensions became available, there hasn't really been anyone to give the Propellerheads devices a run for their money.

Recently, Sonic Charge made Echobode available. This is significant, if you know your Reason history, because Sonic Charge have been behind well-known instruments like Malström. So, it goes without saying that anything that they add to the Rack Extension family will have a big effect on Reason, in one way or another, much the way Bitspeek already has.

So, what's Echobode all about?

But, one of the things I think makes Echobode stand out even more is the fact that there is absolutely no latency! This is no small feat, as every effect in Reason has latency in some form, causing you to have to adjust timing in tiny increments when running an effect with the mix knob at 100%. Echobode does not incur any such trouble. So, if you're looking to do some audio scratching, like on a turntable, or just mangle an audio loop to hell and back, Echobode is your ace.

Echobode is also capable of being an extremely beautiful chorus, phaser, flanger, and just a classic delay, as it does sport a built-in LFO, which can be synced to the host clock. But, one feature I'd really like to point out would be the Anti-Reflection function. Because Echobode is capable of producing such a wide number frequency variants, you can get some frequencies that aren't all that pleasing to the ear. Sonic Charge developed their own technology for not only combatting low frequencies that can wreak havoc on a source signal, but also helps keep feedback loops nice and tight.

How Have I Enjoyed Echobode?

Well, I need to say that this really is the echo/delay device that I've been waiting many years on to appear inside of Reason. It's lush, dreamy, and beautiful to listen to, while at the same time doing grizzly things to my work. Ultimately, it's inspired me in the ways that hardware used to, as it can be slightly unpredictable, while at the same time adding etheric dimension that I've been missing for several years now. This really is the RE effect that is my absolute favorite since the platform came in to inception. And, I'd say that it's a must buy for any kind of music out there.