EboStudio has come up with a clever way to use video in Ableton Live just as creatively as audio and MIDI. Noah Pred put it to the test.

Native video integration has long been anticipated as a natural evolution of laptop performance. While Ableton Live incorporated Arrangement video editing with version 6, there haven’t been meaningful updates to Live’s native video paradigm since then.

Nevertheless, a slew of Max For Live devices have sought to close this gap, and yet they’ve all come at the expense of varying degrees of precious processing power. When there’s only one CPU to go around for both audio and video purposes, that sort of compromise poses an uncomfortable risk for the majority of laptop performers.

The EboSuite installation process requires a functional and accessible User Library to have been configured in Live’s preferences, as this is where their devices will be installed. Most users already have this configured, but it’s worth double checking. You may also want to download and install the HAP codec on your system so HAP videos are supported natively for viewing in other applications and for conversion in third-party utilities.

Free batch converters such as AVF are available to translate your video library to HAP format in one fell swoop. But be warned: the primary compromise of HAP format is significantly inflated file size, in many cases multiplying the original video file’s size many times over. This means you’ll need to make sure you have plenty of storage available to hold the new files – or you can take a more frugal approach simply use EboSuite’s eConvert device to reformat shorter segments in context as needed. 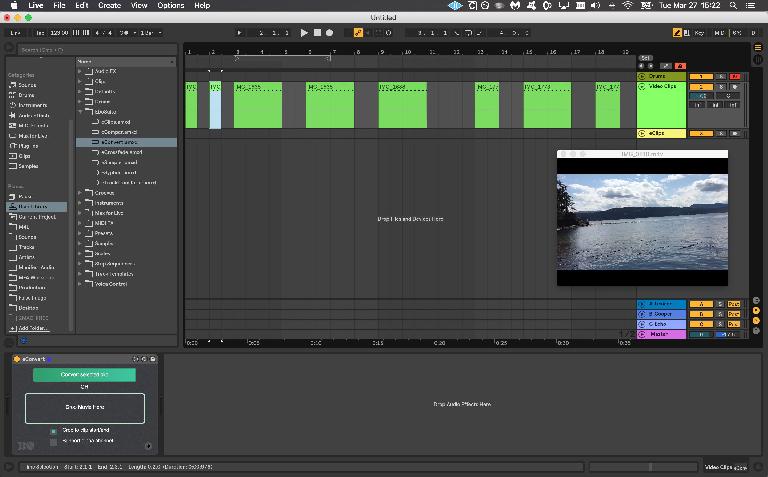 The eConvert device is designed to allow you to edit normal Quicktime videos in Live’s arrange view, isolate the segments you wish to use, then drag them onto eConvert’s interface to reformat only the necessary bits of video. Alternatively, you can drag entire videos onto eConvert from Live’s Browser or from the Finder, but the aim here is to reduce excess file storage by only converting the video segments you actually plan to use.

The resulting HAP-converted video clip, available for use

Once you have some video clips converted, you can put them on a new Audio track. If you’re in the Session view, a Live dialogue will automatically pop up to warn you that video is only available in the Arrange view – but EboSuite cleverly circumvents this limitation by projecting video through a simple application running in the background.

Once you’ve got your HAP-converted video clips placed on a track, you’ll need to place the eClips device on that same track for them to display through the EboSuite viewer; to ensure the viewer remains visible, you can select “Always On Top” from the application’s view menu. You’ll find the detail view for EboSuite’s devices fairly simple: a few controls, with a warning message and tip viewer available for expansion with the arrow toggle at bottom right – helpful when getting started to let you know if you’ve done something wrong, or to re-launch the EboSuite viewer app with a click if needed.

With video clips successfully available for triggering in the Session view, the next logical step would be to Warp and loop them – but before EboSuite can process new settings, you’ll have to click the Clip’s individual Save button in the Detail view so the newly-created Warp markers are visible to the EboSuite app.

These small bits of homework remind us this is a very clever workaround not natively supported by Ableton – but easy enough to get the hang of. Once it’s all configured, you can deploy start and loop points, Warp markers, and Follow Actions to create dynamic video sequences. If you’re using multiple video tracks, the right-most Session view track (or bottom Arrange view track) is “on top”, with the track volume faders cleverly controlling opacity for each video channel. 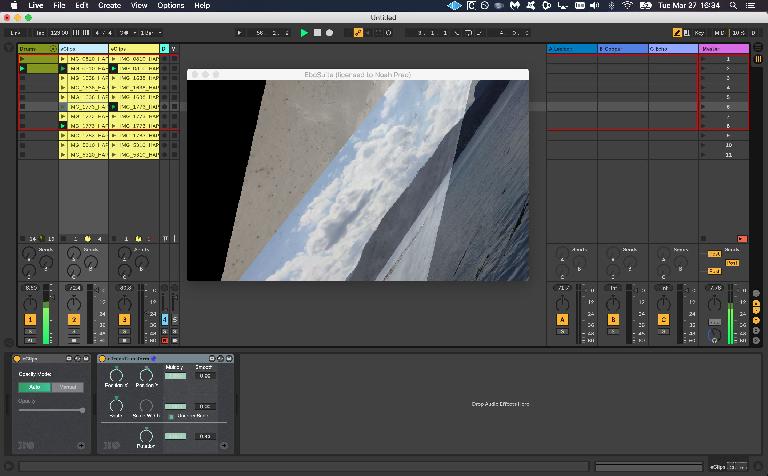 A pair of eClips tracks with different eTrackTransform settings and opacity adjusted by volume, output to the EboSuite viewer.

The eSampler device is where you’ll go if you want to trigger video clips via MIDI. A simple ADSR envelope controls the fade in, duration and fade out of triggered video. For those experimenting with “visual music” – utilizing the audio content of video samples as musical source material – you can leave eSampler at its default setting. But if you strictly want to use it for visual output, you can set it to Video Only mode, ignoring any connected audio. I built a Drum Rack out of eSamplers and set them to receive MIDI input from a correspondingly configured 808 kit on another MIDI track and instantly had video triggered by my drum pattern. The Velocity to Opacity setting allows for even more dynamic synesthesia, while a polyphony menu governs the behavior of overlapping audio components. Tune, Pan, and Gain controls pertain only to the audio component.

An eSampler device placed on a pad of a Drum Rack that contains three other eSamplers.

The eCrossfade effect is only available in a single instance on a set’s Master channel. It uses Live’s Crossfader to control one of four crossfader curves, three wipe transitions, or luma and chroma effects, with susceptible video channels assigned to side A or B. It’s somewhat puzzling color manipulation is only available on the Master channel, but it can at least be diverted to one side of your crossfader assignments to exempt certain channels from the effect. The color effects also seemed a bit pixelated at my screen’s resolution, but that could be an artifact of my HAP conversion settings. 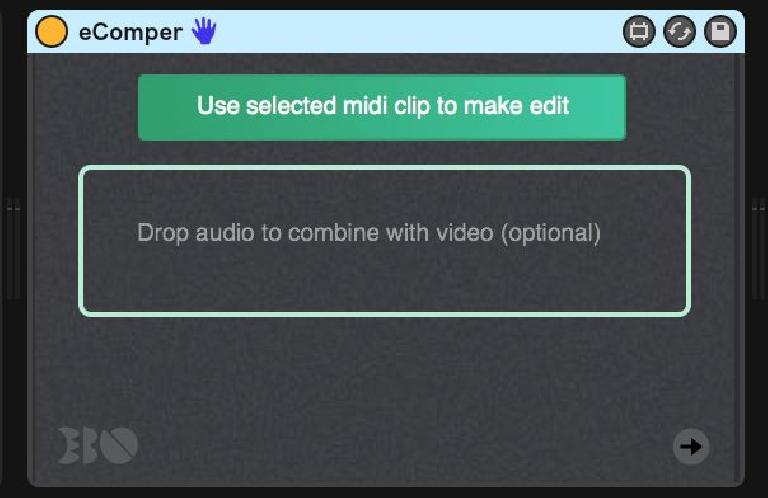 The eComper device, ready to compile an edit from MIDI

If you want to commit your programmed eSampler results into a new HAP video render, the included eComper devices captures a MIDI clip’s sequence by pasting the corresponding HAP video chunks to their place in a new video timeline – ignoring, however, any envelope or other eSampler settings. For more intricate capture, you’ll need to try the eSyphon device.

Placed on the master output, eSyphon works with the freeware Syphon recorder to capture the resulting video output of your playback – so if your goal is to produce dynamic, tightly-synchronized music video content, eSyphon is what you’d use for output. It only captures video though, so audio will have to be rendered separately.

For additional effects and output capture, eCrossfade and eSyphon are placed on the Master track.

While there’s a brief learning curve involved in preparing video clips and getting used to the ins and outs of the HAP format (and EboSuite’s output application), their clever deployment of the new GPU-only codec certainly holds promise. The resulting visuals maintained a snappy response from MIDI and clip triggers, while resolution remained crisp despite my 2015 MacBook Pro’s CPU never exceeding the 10% range. The lack of more extensive individual track effects is somewhat perplexing, though I expect there are more devices in the development pipeline.

EboSuite makes live AV performance possible on a single machine with an optimized processor load, but it’s not likely to be the platform where you necessarily generate high-quality source content. For those interested in putting together an hour or longer performance, I imagine the workflow would involve extensive video editing and generation in something like After Effects before committing to HAP format for EboSuite usage. Nevertheless, with a bit of homework, EboSuite should open up all kinds of new possibilities for dedicated audio and visual artists alike.

Cons: Not exactly plug-and-play – requires some configuration and ongoing edits to make the most of the HAP codec; requires substantial disk space for resulting HAP files.

Learn much more about Ableton Live in the Ask.Audio Academy: https://ask.audio/academy?nleloc=category/audio/application/ableton