SPACES II is EastWest’s latest version of their original Spaces convolution reverb. It brings a new streamlined interface, additional features and a host of new IRs—Impulse Responses—along with all the previous content, including some specialized spaces. Let’s take a look at SPACES II and see what it has to offer.

For anyone unfamiliar with the underlying technology of convolution reverbs, here’s a very brief overview. While a traditional algorithmic reverb creates reverb and ambience by accumulating delays in characteristic patterns, a convolution reverb uses recordings of the response of real spaces—essentially it’s a sample-based reverb. Microphones are set up in a real space, and they record that space’s response to a full-bandwidth signal—a transient impulse or a frequency sweep.

This recording is saved as a standard audio file, referred to as an IR, or Impulse Response. When a particular room or space is selected in the reverb, that IR is loaded just as samples are loaded by sample-based virtual instrument, and the audio signals input to the reverb are multiplied (sample-by-sample) by the samples in the IR. The result is that the audio sounds like it’s in that room, at the location used when the IR was recorded.

Convolution reverbs typically offer fewer controls for shaping the reverb, since many of the parameters you’d tweak in an algorithmic reverb are fixed in the IR recording itself, but there usually are some basic adjustments available. The quantity and quality of the IR library is the key component of any convolution reverb.

SPACES II includes over a thousand IRs, all at 24-bit resolution, recorded with top-quality mics, preamps, and gear; according to the documentation, 353 of these are new to SPACES II. They’re accessed from the Preset browser, where they’re organized by the type of space—church, hall, stage, plate, etc—and include not only traditional music spaces, but also more unusual spaces like tunnels and garages—suitable for post-production applications—and IRs of classic digital reverb hardware units, notably the Lexicon 300 and AMS RMX16.

A couple of SPACES II’s IRs

One category is named “Instrument Specific”—these IRs are presented as a good match for certain instruments. With orchestral instruments, the mics and speakers were positioned and aimed to more faithfully emulate how those instruments would sound in the particular space, based on their position on stage in the orchestra. Other instrument-specific IRs are meant for pop instruments and even synths.

Some of SPACES II’s Instrument-Specific presets

Most of the IRs come in both mono-in/stereo-out (M-S) or “True Stereo” (T-S)—stereo-in/stereo-out (some are only T-S). Stereo-in/out reverbs typically preserve more of the directional information in stereo signals fed through them, potentially making them sound more natural in the room, while mono-in/stereo-out reverbs can sometimes provide a more even stereo reverb image with panned sources. EastWest promises that most of the IRs feature up to an 8 channel format, for use in surround mixes. The naming convention includes the M-S/T-S information, whether that IR is a recording of the front (FR) or rear (RR) of the space, and the decay time.

The SPACES II interface packs a number of controls into a very simple, streamlined interface. The plug-in window is dominated by a photo of the actual space sampled for each IR. A click on the Presets button opens a four-pane display where you’ll find the IRs listed by category, specific space, and type (M-S or T-S). A double-click (or a tap on the Load button) loads the selected IR for use. Once an IR is loaded, quick access arrows below the photo let you audition the previous/next IR without having to go back to the browser.

Four large knobs control the main adjustments. There’s an Input level control, and a Pre-Delay knob—remember, pre-delay can affect the perceived distance and clarity of the reverb. On the right, you have separate knobs for Dry level and Wet (reverb) level.

To the left of the photo are several buttons—some are simple displays, while others access additional features. Of the three Page buttons at the top, Display toggles between the photo and the graphs for the Decay and Filters settings, which are selected and enabled by the other two buttons. While you can’t really lengthen the decay of an IR, you can shorten it. Decay Time is new in SPACES II, and it’s an extremely useful feature, which greatly extends the usability of the supplied IRs—instead of searching for an IR with an appropriate decay time, or lowering its level to avoid excessive tail, you can choose an IR solely on sound quality, and tweak the decay to match the needs of the particular mix.

The Filters button accesses simple highpass and lowpass filters with adjustable cutoff frequencies, which act on the input signal. While it might have been nice to have a more comprehensive EQ, this approach is more true to the tonal character of the IR, and you could always insert an EQ ahead of SPACES II if you really felt additional tonal tweaking was needed.

The three Mode buttons at the bottom relate to the configuration of the current IR. The Mono button is a switch that lets you collapse a stereo reverb output to mono, when desired. The other two buttons are display-only, indicating whether the currently-loaded IR is in mono-in/stereo-out format (Stereo) or stereo-in/stereo-out format (True Stereo). The Main Menu button accesses the usual Save/Save As functions, and lets you call up recently-opened presets. Keyboard shortcuts are also available.

A few settings are available from the Settings button.

There’s an option to disable multithreading, just in case you have problems running SPACES II on a particular computer. If you plan to primarily use SPACES II in an Aux channel, as part of the usual Send/Return hookup, another option makes that configuration the default (basically it sets the instantiated Dry level to zero), for setup convenience (and potentially to help less-technical users avoid a common pitfall).

Adding several instances of SPACES II to a couple of mixes, I found the reverb to be uniformly high quality, with a typically warm, rich sound and an excellent sense of depth. I particularly liked some of the new spaces, including the LA Studio Drum Rooms, and Solo Vocal IRs. 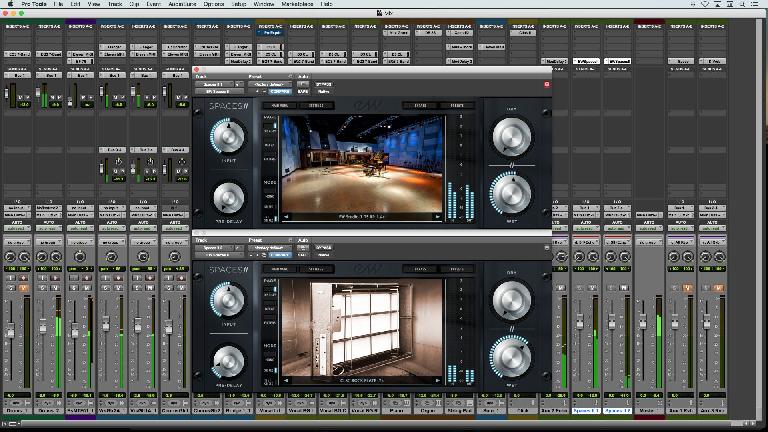 SPACES II is an excellent option for anyone looking for a good collection of IRs in a simple, CPU-efficient package. The wide-range of rooms and spaces, combined with the Filters and the new Decay control, should make it possible to find a suitable IR for just about any application.


Cons: No full-featured EQ (not really missed, in use)