One of the microphones that gets the most use in the work I do both in studio and on mobile sessions is the Earthworks QTC50. With that in mind, I’d like to share my experiences with it and discuss why I turn to it for a variety of audio tasks.

First for a quick bit of background. I’ve been using Earthworks microphones since the TC30K omnidirectional model was released years ago. That model got much use recording Al DiMeolas Martin and Hermanos Conde acoustic guitars, and I found it delivered a clean, pure tone that sounded exactly like his instruments, with very little to no coloration. From there, I continued ‘up the chain’, moving to a pair of QTC1’s (which I’ve also used on Omar Hakim's drums/overheads)  and now to my favorite Earthworks mics so far, a pair of matched QTC-50’s.

The QTC50 is an omnidirectional mic with some pretty impressive specs, which it certainly delivers on. The frequency response is 3Hz - 50kHz flat, and it handles up to 138dB SPL without distortion. The unusual design helps deliver a remarkably even sound across the whole frequency spectrum and there is virtually no proximity effect, meaning you can put it unusually close to the source without an artificial bass boost. 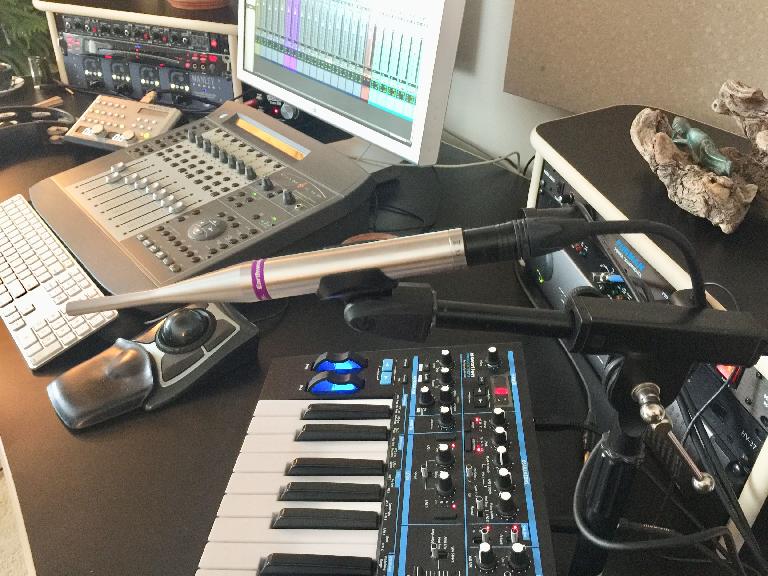 I have one sitting on my workstation desktop at all times, hooked up to either a Grace m108, which also clocks my Pro Tools HD rig, or a stereo Millenia HV-37. On my mobile rig, I will plug it into the Earthworks 1024 preamp or the Grace m108. I tend to find these mics sound best with non-tube preamps (in my opinion) because they react lightning fast to the transients and impart no acoustic preamp footprint, delivering the purest tone.

The reason it sits on my desktop is because I turn to it virtually every day, several times a day. When composing TV music, I add lots of percussion, cymbals and acoustic guitars to my work. I can just grab a shaker, tambourine, drum or whatever, and it's ready to go at a moment's notice. With cymbals, I mic literally an inch or two from it (I know it's unusual), where there lies a ton of odd coloration and overtones. I actually want those odd sounds, especially in crime related shows, and the QTC delivers them to the TV screen better than anything else I own. 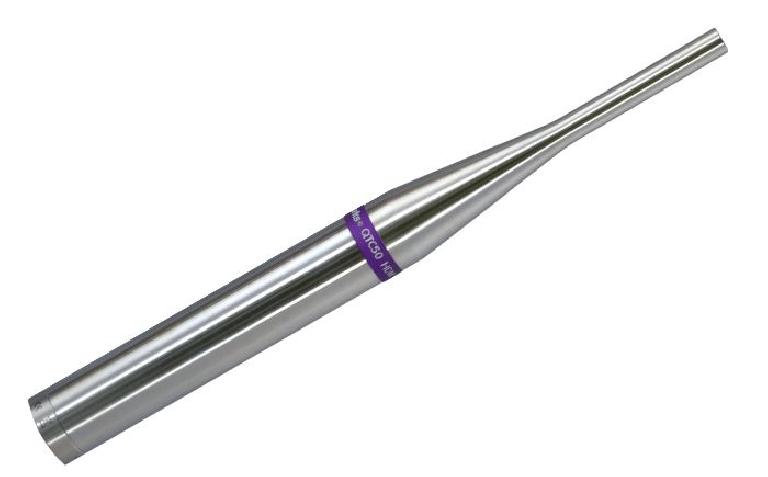 With acoustic instruments, I turn to the QTC for a few reasons. Number one is that the overall sound is pristine, and I tend to use really good sounding instruments. Combined with a super clean, fast preamp, the acoustic instruments shine with the ‘50. From 12 string Guilds to mandolins, resonators, cigar boxes, banjos and my trust Martin, it always works. Another small but important factor is the fact that the omnidirectional pattern means I don’t waste precious time ‘placing’ the microphone. For the most part, it sounds good wherever you place it. With that in mind though, I do get super close to the mic and listen with my headphones, so that the instrument almost sounds ‘acoustically exaggerated’.

When working with renowned flamenco guitarist Hernan Romero, with whom I recorded tracks for the Rio Olympics, I will use a pair of QTC-50’s on his guitars. I’ll place one where the neck joins the guitar, and one on the actual body of the instrument. I find the neck mic has a brighter, more aggressive sound, and the body mic carries more of the bass information. Again, that’s what the guitar actually sounds like in those physical places, so the mics translate that perfectly. Panned either hard left/right or at around 9 and 3 o’clock, it’s always a huge sound. I also use the mics on his hand claps (palmas) and cajon (front and back) and any percussion that's needed. It just works.

A Little Help From My Friends

Several of my friends use Earthworks QTC-50s as well, so I asked them to share some insight. “I used them as overheads with Mike Mangini on Dream Theater's 'Into The Great Divide' record", noted engineer extraordinaire Richard Chycki, who’s also used Earthworks mics on Rush’s Neil Peart's kit. “The QTC50s are really open and transparent, and have excellent response on the cymbals. I’ll print the pair with a bit of light Urei 1178’s set to about -2dB on peaks”. Owner/engineer Paul Antonell also uses the QTC 50’s at his Clubhouse Recording in Rhinebeck, NY. “I find the QTC-50’s work great as overheads and/or room mics, because they simply sound exactly like my room”, he said. “I find they pair up perfectly with the Earthworks 1024 preamp. I just used them recently on Jack DeJohnettes drums and along with Neil Dorfsman, on Nir Z’s kit. The other thing I use them on is acoustic bass, because they are so clean. I’ll place them right on the neck and it gets all the pure sound of the instrument, which is all I could ask for from a mic”.

The Earthworks QTC 50 captures exactly what the sound source is in front of you with no exaggerated frequencies. The omni pattern makes it extremely easy to place and the low noise and crystal clear, open sound make it excellent for use on acoustic instruments, drums, percussion and even vocals. It’s truly one of my go-to studio tools.

Pros: Detailed, open sounding realistic mic that captures the source exactly as it sounds without imparting any characteristic.

Learn more about recording and mic techniques in the Ask.Audio Academy here: https://ask.audio/academy?nleloc=new-releases