The trick with making a really believable string instrument is translating one playing style into a completely different one. Could Gothic Instruments have cracked it?

Strings were one of the first types of real instrument to get the sample treatment because at their most basic, they are quite easy to reproduce. Nuance, however, is a quite different matter. Even if you sample lots of velocity layers of a string sound to achieve greater depth and realism, you still come up against the fact that a piano keyboard – which most people will be using to play the sounds – isn’t played the same way a string section plays in real life.

Many developers have tried to remedy this disconnect and most have used Kontakt, with its advanced scripting capabilities and the fact that you can use it to combine phrases, layer samples and many other smaller modules into a very powerful instrument. The key as far as DRONAR Live Strings goes is the blending of a large 10GB sample library played by the Liverpool Philharmonic Orchestra with a powerful synthesis engine, an effects stage and sequencers that add notes to your input to create much richer harmonies and patterns. 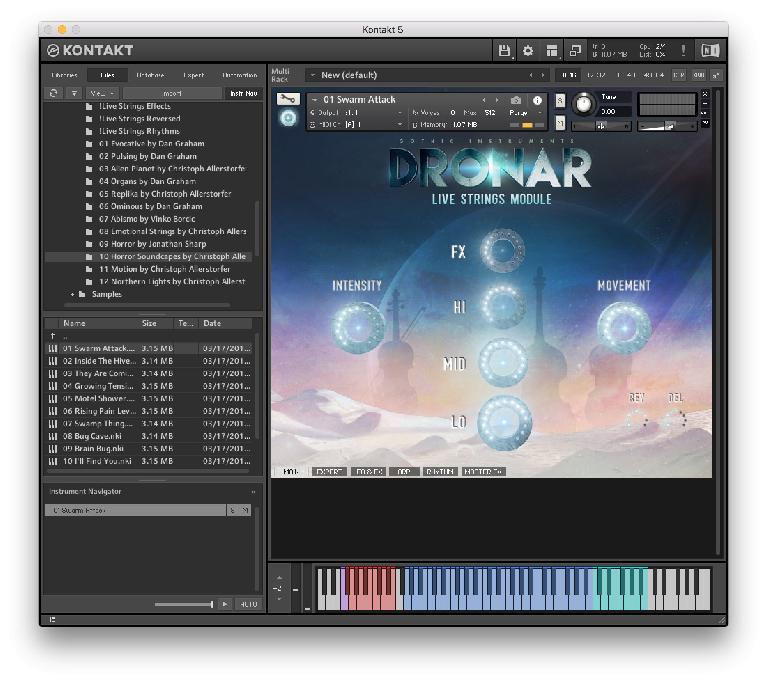 Running in the full version of Kontakt 5, you get 731 presets plus extensive customisation options including randomization and fully tweakable LFO, arpeggiator and effect sections. The main interface is for instant playback, with colour coded keys as usual showing which keys contain content and also which act as control switch sections for modifying patterns.

The instrument adds notes to your input, so the idea is to hold just one or two notes, then it adds bass and other notes appropriate to that key to create more complex parts. Sometimes these are in the form of chords, other times they are arpeggios or patterns, and you can tweak these in the Arp and Rhythm sections. Remaining on the main screen for a moment, there are quick controls for the levels of the three parts, FX level and Intensity and Movement, all of which allow you to make quick edits. 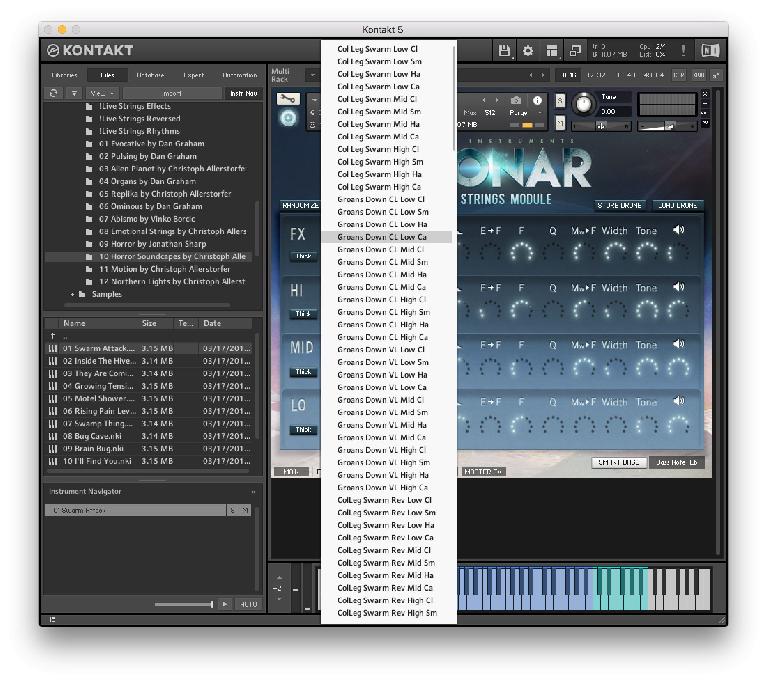 Jumping into the Expert menu shows you a separate control section for each of the four layers: three “drones” or samples and the FX layer. You can choose any sample from the library for each layer and also randomize them. In other sections, LFO and arpeggiation can be applied and there are master FX to colour the sound. The Rhythm section lets you change the amount of movement in the sounds.

The sound quality is excellent but that’s only half the story. What really sets this module apart is the movement it’s able to provide. At the more sedate end of things, stately pizzacato string patches sound crisp and bouncy. Many of the other patches veer towards horror or certainly ominous, atmospheric tones. Of course you can often use the mixer to change this: remove the high samples to dial back the horror, or just leave the mid tones to create a more neutral pad style sound.

Ultimately this is an excellent tool for scoring, game and movie sound design and similar applications. Even played with just a couple of keys, it is able to generate organic, pulsing, complex and sometimes terrifying string parts and with great tweakability, can be bent to do pretty much anything you could ask of it.