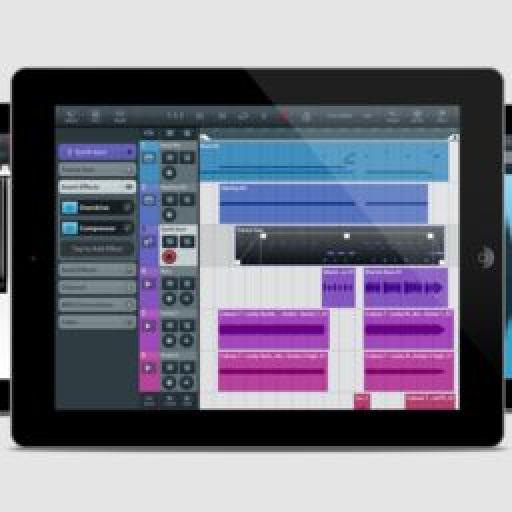 Language
Before GarageBand for iOS was introduced, a DAW on a tablet seemed far-fetched. GB for iOS (and Auria) changed all that, though there's still room for more. So, how does Cubasis for iPad fare?

If you are a Cubase fan or iPad user (or both!) then the new Steinberg Cubasis app really is a no brainer. We have had a few iOS apps that promise to behave like full blown DAWs but have perhaps fallen short in a few areas so far.

Cubasis seems to tick all the boxes, on paper at least, and with Steinberg's heritage could this be the only serious audio app you'll need on the road? Let's get under the hood and see how it performs.

So before I get into what I actually think of Cubasis and how well it works, I thought I'd cover a few key aspects of the App's specs. This isn't usually that important with an iOS app as it's pretty rare that you are able to produce entire projects on them. Well, things are changing and the specs of this app are pretty impressive!

Cubasis has over 300 MIDI and Audio loops bundled with it, 70 Virtual instrument sounds (based on HALion Sonic) and 10 Studio grade effect processors. You also get the ability to export to Cubase 6 or 7, SoundCloud, AudioPaste, Wi-Fi servers and iTunes. You can also perform traditional, straight up, audio and MIDI exports. 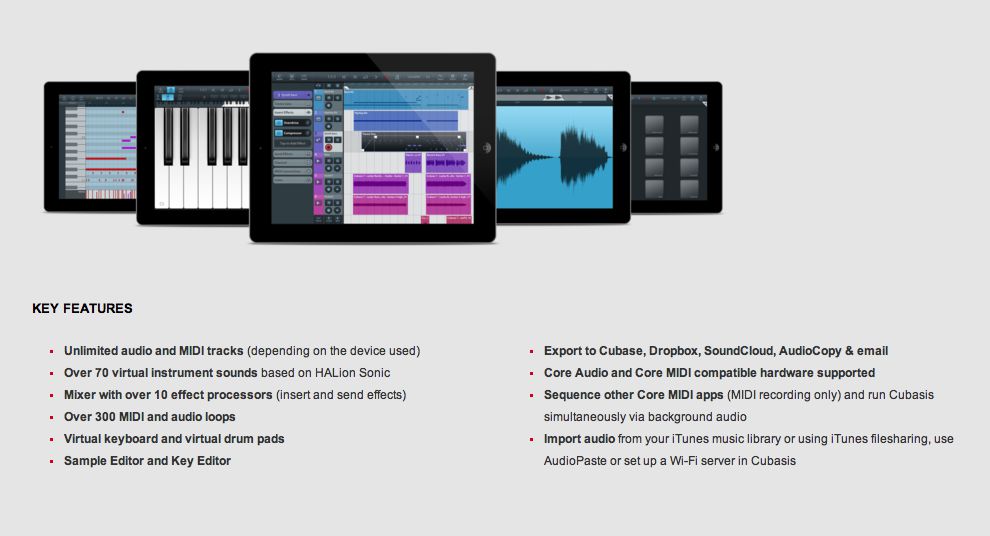 Although all of this is really impressive, the real key feature here is the ability to add unlimited audio and midi tracks to your Cubasis projects. That's right you heard me, unlimited tracks! There are of course a few real world limitations on this and they are actually based on the hardware you are using.

If you are on the iPad 2 or iPad mini, you will be limited to 48 voices of polyphony (either audio or virtual instruments). If you have the iPad Retina or v4, you will be upgraded to 64 voices. Either way, this is enough to put together a decent sized project and blows Garageband's 8 tracks well and truly out of the water.

After having a small lie down, due to learning that I had 48-64 voices available to me, I was ready to start testing Cubasis out for real.

It's worth mentioning  here that Cubasis is $49.99/£34.99 but for what's on offer, that seems perfectly reasonable to me. You have to put this into perspective and realize it's probably about half the amount you would pay for a basic plug-in in a full DAW. 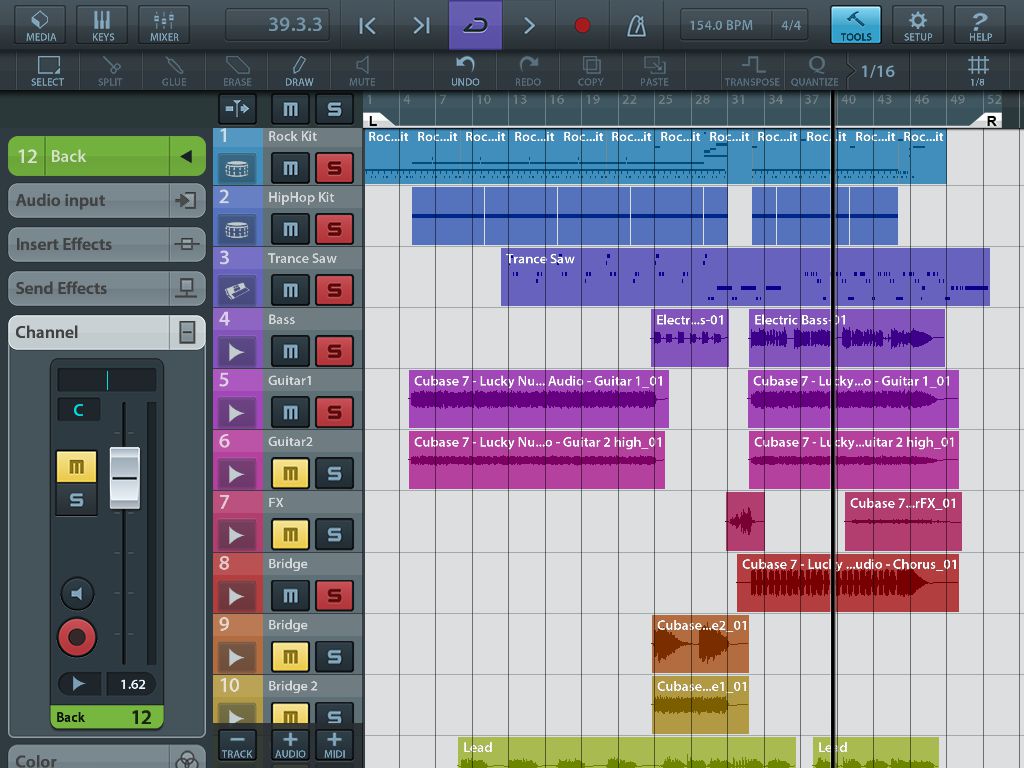 The default view in Cubasis.

On loading up a demo project in Cubasis, I was pleasantly surprised by how similar the interface was to that of my latest version of Cubase. The continuity they have managed to achieve here really is bang on. 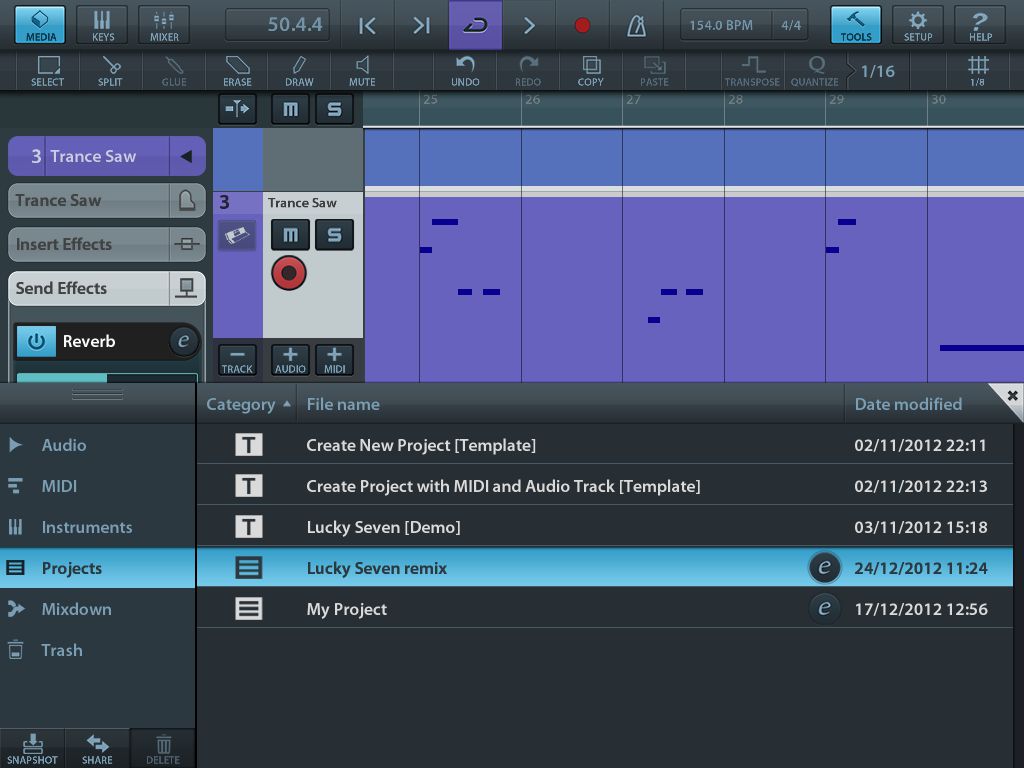 Without even thinking about it, I was navigating my way around the different tracks and devices in the project, editing audio and accessing the mixer. If you are proficient in any DAW the learning curve is about zero here and even the beginner should find this straightforward to operate. If you get stuck there is an awesome built-in help facility. 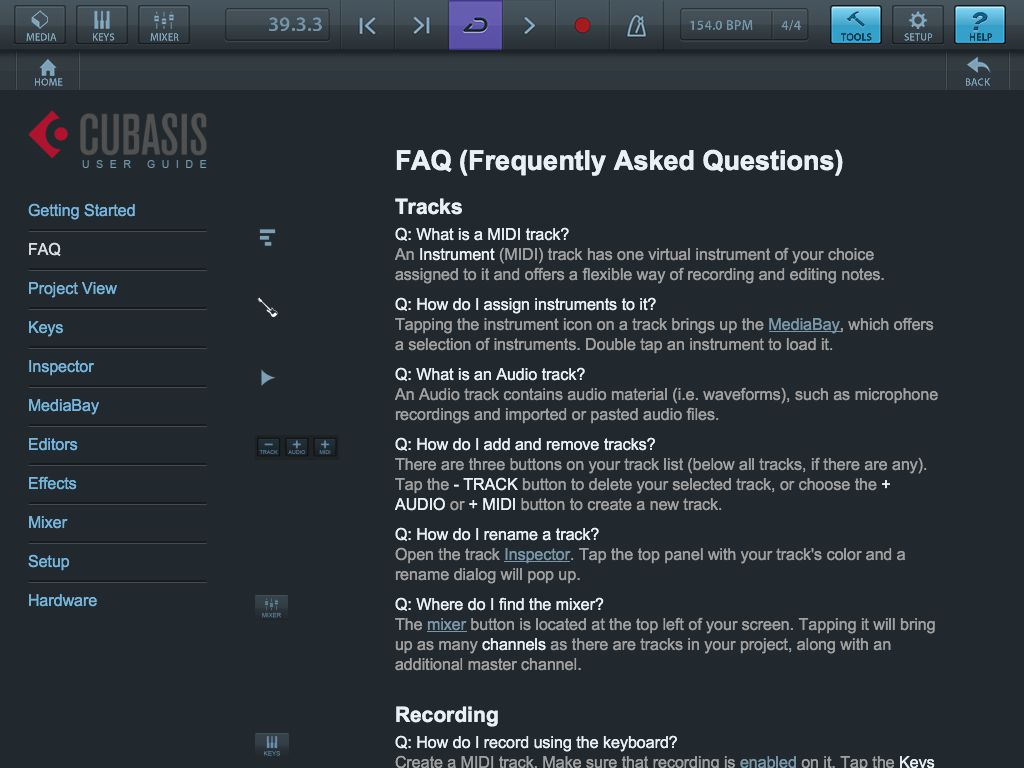 The fact Steinberg have managed to adapt a completely mouse controlled environment for a touch screen interface is a feat in its own right to be fair. Everything works well and even the most fiddly job like editing MIDI notes works smoothly. 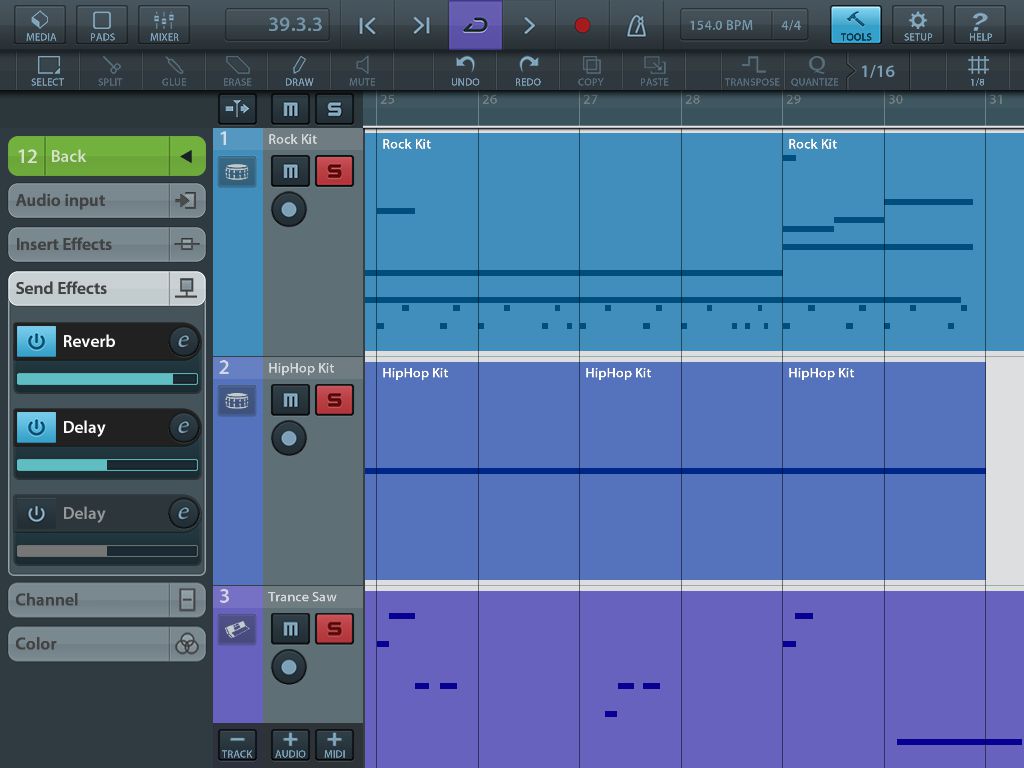 Other functions such as zooming in and out in the arrange window  actually work a little better! There are also some very nice touches for customizing your view of the interface. The tools area and inspector for example can be quickly folded away to free up valuable screen real estate for the arrangement or editing. 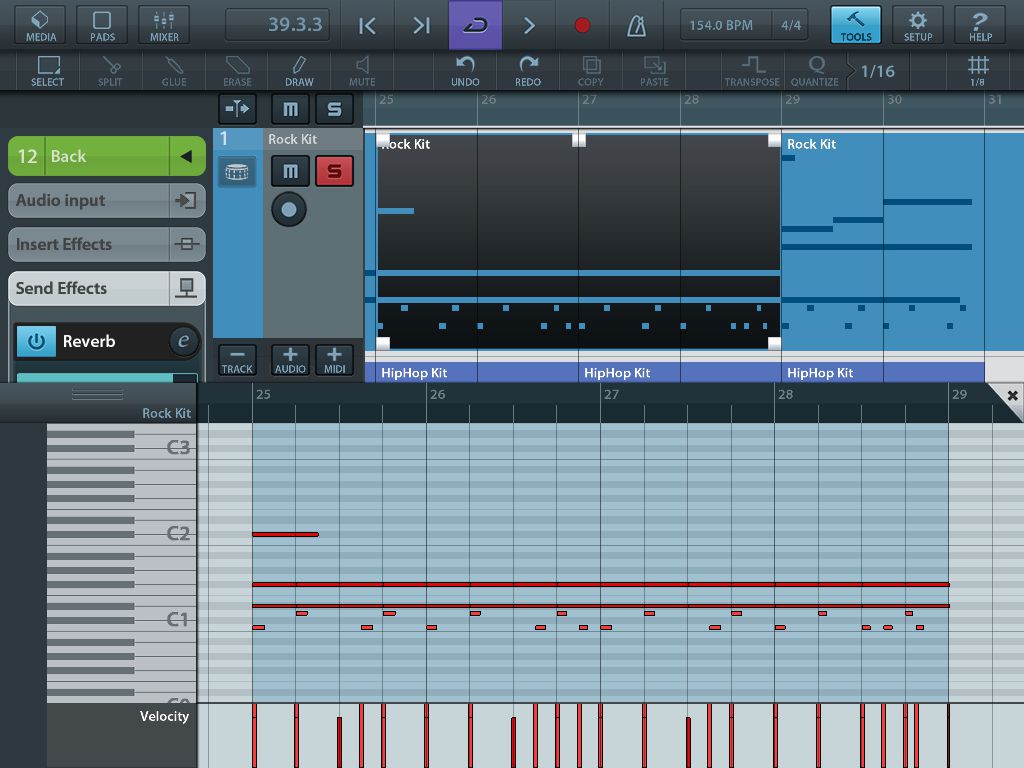 The MIDI note editor in the lower section of the screen.

On the subject of editing, most extra windows needed when editing either audio, midi or indeed the mix, will be brought up at the bottom of the interface. Each one of these windows is tailor made for its purpose and everything is laid out very well. Other windows you can expect to see as pop-ups are the fully featured mixer (with pan, solo, mute, record arm, edit and monitor buttons), a scalable keyboard and drum pads. As I dug deeper here, I was honestly impressed with every new feature I explored. This really is very well put together. 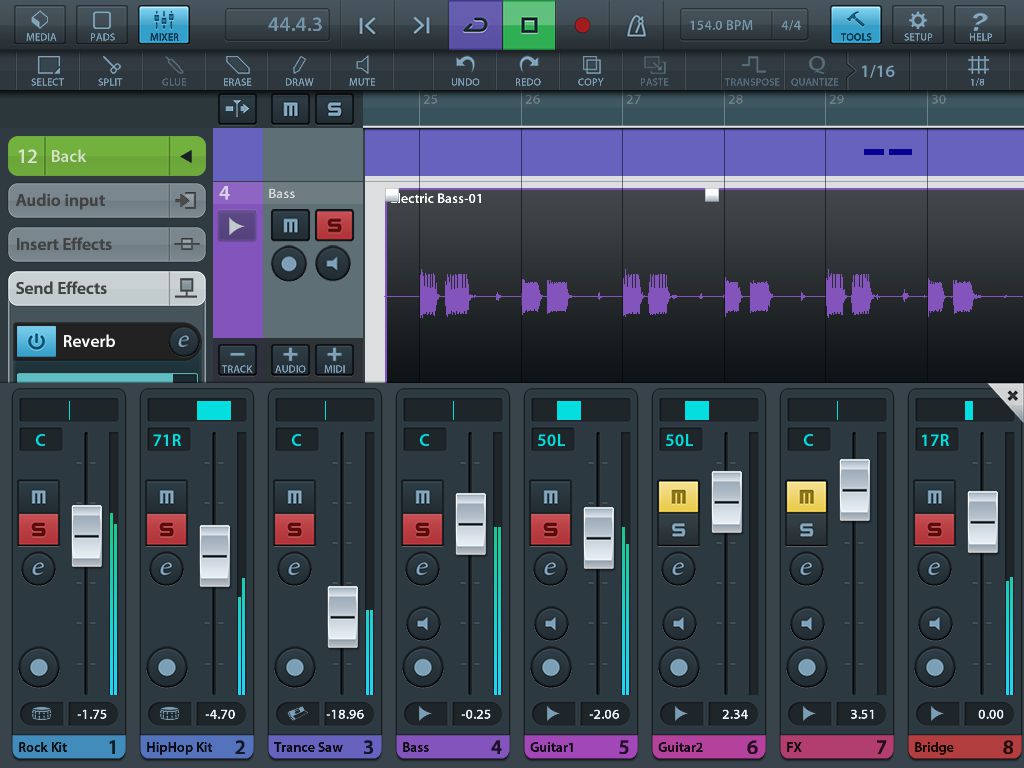 This is actually my first phase of testing of the Cubasis app, so I only really had enough time to get into the demo audio and projects. As far as I could tell, everything worked perfectly and with little to no noticeable lag or latency.

I was able to edit audio, add effects and edit MIDI sequences without any glitches. Things ran so smoothly it's almost in danger of running better than a fully blown computer based DAW. Some of the demo projects have a good number of tracks and effects running simultaneously too. The effects here are excellent and pretty much identical to those you would expect to find in Cubase. There are ten in total with all of your EQ, dynamics, spatial and modulation needs covered. You can have three insert effects per track and up to three send return effects as well. You can also process you master output, to create a basic mastering chain. This is far beyond anything we have seen on the iPad so far. I really can't stress how smoothly this thing runs. After hours of editing, playback and exporting, I didn't experience one hiccup. I really think you could run this as a pro mixing tool on the road. Obviously, we are missing a lot of features here but there are enough to get by until you are back in studio.

So all in all Cubasis is a hands down victory. Everything supplied here works and works perfectly. If you are a Cubase user and own an iPad, this is simply a no brainer, you have to have it. For just under £35 you can't really go wrong. Cubasis running on the iPad 2.

I have only two criticisms of the Cubasis system, one minor and one pretty major. The first (minor) thing I'd like to see changed is a zoom function on the mixer. The channels are quite wide and take up a decent amount of screen. The ability to 'crush' them when less info is needed would be fantastic.

My second criticism here would be the lack of any automation. At first I was certain I just hadn't come across the controls and that I would unveil it at any point, but the further I delved I realized that it just wasn't going to materialize. I got very upset and then finally accepted reality.

I'm not sure if it was omitted due to the lack of support on the hardware / OS or if it's simply a CPU resources issue. I would certainly sacrifice some polyphony for the ability to record basic automation. It's a real shame and could actually see it being a bit of a handicap in larger sessions. Maybe it's something that will get introduced at a later date, I certainly hope so!

Christian L
Cubasis for iPad is a good news! Thanks for the great review Mo! :)
Harteg W
Do you know whether Cubasis for iPad has support for tempo changes and time signature changes within the song? I have yet to see these features in any ios music app, but was hoping that it would be present here.
instinctive
"Studio grade effect processors"

This clearly demonstrates that you have never even touched a "studio grade" effect processor in your entire career.

Mo Volans
I've touched a few. I liked it. Mo
Reamping with just Cubasis and I
Is there a way to Reamp in Cubasis I know you can make DI tracks but can put say a Bias amp on the DI track then switch to a JamUp Pro track and experiment?