Language
There seems to be a high-quality Kontakt instrument for most instruments, and Crypto Cipher want to make sure the tabla is well represented too. Lynda Arnold put this library through its paces.

Crypto Cipher recently announced the release of Solo Tabla, an innovative sampled Tabla instrument for Kontakt. The library comes with over 1.5 GB of samples, bonus loops and MIDI files. The Crypto Cipher team has steadily released sample libraries of popular classical Indian instruments over the past year with winning results. They are quickly becoming the go-to source for playable sampled instruments from India, as more producers are looking for sounds from other cultures to enhance their recordings as well as an opportunity to learn about instruments in greater detail not yet explored. Master Tabla player Jagannath Singh was hired to perform and record in the studio and appears in the introductory training videos. This is a special window into the life and approach of a master Indian musician who is nationally recognized for his life work. 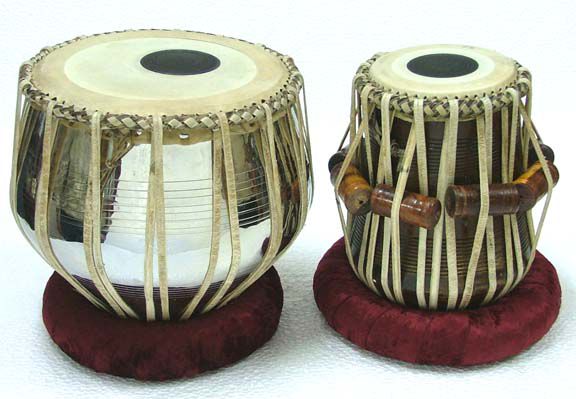 Figure 1—A Pair of Tablas.

The Solo Tabla instrument presents a challenge to those of us who are not familiar with playing an actual Tabla. To know the Tabla, is to know its language which is called the Alphabet of Tabla. Before students of the Tabla begin to hit the drum, they learn the language of the various hits and tones of the Tabla's surface by singing or chanting them. Single seed syllables like 'Ta' 'Ga' 'Ka' 'Thun' 'Dhey' 'Dhaa', etc. are used to describe each drum hit. Special thanks to Crypto Cipher Director, Sumit, for directing me to the eight well-produced videos explaining some of this language so I could approach playing the instrument correctly. At least, so I could start to practice playing it correctly. Gone are the days when I blissfully fired up one of a few REX Tabla loops included in the first edition of the Reason factory sound bank and proceeded to hear these loops in many a production. Thankfully, we now have a tool for composers to create their own loops and evolving Tabla grooves. If you are a percussionist or producer who knows a bit of the Tabla language, you will be blown away by the sound quality and embedded control of this release. 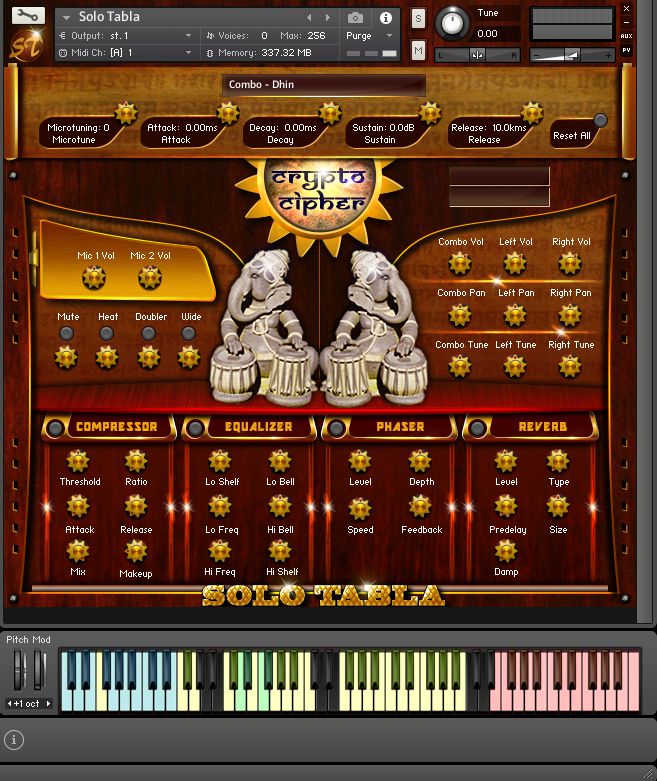 The Crypto Cipher team has done an excellent job mapping the samples in Kontakt. There are two main drums for the left and right hand. One drum is larger and plays the lower tones and the other the higher tones. In Kontakt, the two drums are mapped in the left/right center of the keyboard with the main tones along with pitched versions. At the very bottom of the keyboard are common two-handed hits like 'Dhaa', 'Dhin' and 'Dhey.' These are useful for ending phrases (a great take away from the video). The series of red keys at the very top of the keyboard are common combinations of the tabla alphabet with one sound on attack and the other sound when the key is released. Every time a key is pressed, the name of the sample appears so you know the name of the tone. This makes learning the instrument that much easier. The tutorial videos are very helpful in understanding the layout of Solo Tabla in the Kontakt player. I would recommend starting there before launching the instrument. 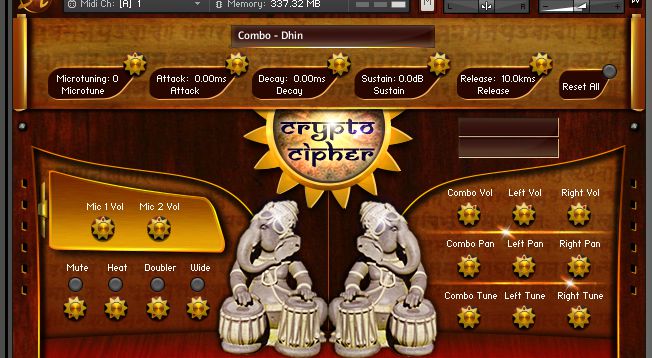 Tuning is one of the most important aspects of Tabla playing. The Solo Tabla instrument is constructed with special attention to tuning individual tones and combinations of tones. At the top of the Kontakt instrument are the micro tuning and envelope knobs selectable for each drum hit. Underneath that are more global controls over tuning, volume, pan, microphone mixing and spatial controls. The Combo knobs control the tuning, volume and pan of the combination hits. The left and right knobs control the left and right drum respectively giving you global control over where you want the two drums to sit in your mix as well as the tuning of each drum. To top it off, Crypto Cipher included an effects section that includes a compressor, equalizer, phaser and reverb. I've found that using a built-in compressor in subtle Kontakt instruments like Solo Tabla helps the sound cut through the mix without having to chain more effects that ultimately can change the sound later.

Many Points of Entry

There are many points of entry for composers and producers to use Solo Tabla. I don't have the best finger drumming skills, but I can imagine players that do will jump right into this and have a blast. Others may find comfort starting with the included MIDI loops to find out how common loops are made and then customize them. EDM producers may find a tone or two that they like to give their grooves a different flavor. It will be interesting to hear what experimental composers do with Solo Tabla as well. Whatever the case, Solo Tabla is laid out in such a way to allow for a wide range of applications and it is a welcome addition to the composer's toolbox.