Language
The aim behind Echoes in the Aether was to create fun, creative, interactive, rhythmic, and playable sounds for Absynth users. Timo Preece finds out if ContortDistort achieved their objective.

Echoes in the Aether is nothing short of a beautifully unique and creative sound library for Absynth 5.2.1 or higher. It’s comprised of 52 new patches, 494 macro patches, and 64 new samples which comprehensively include:

In terms of belonging to a particular style, Christian commented that there wasn’t any specific genre in mind. Instead his goal with this project was to create unique sounds that are fun, creative, and interactive, while still being playable and useful in a variety of meaningful ways.

Through my own exploration meandering through the sound set, I came to a conclusion that although this library isn’t bound to an isolated genre, there is an identifiable coherency in aesthetic that unifies its overall theme. This cohesiveness is elegantly delivered via cinematic soundscapes, unique shifting textures, complex rhythmic morphing schemes, crafty juxtaposition between delicate to aggressive modulation and distinctive forward-thinking programming.

Additionally, contortDistort just announced that it will be giving away a free mini sample pack. It will have a couple of patches from each category along with a few macro patches for each preset and the ReadMe.

It’s apparent that a lot of attention has been given to the setup, layout, and parameter assignments. The performance controls allow for a wide amount of variation, manipulation, and exploration. They provide access to immediate creativity without needing to dig deep into the patch. Some controls are simple and straightforward, while others are very complex, having a wide array of parameters hooked up to a single control.

Speaking with Christian about his musical/technical influences he reflects, “One of the things that got me into electronic music and synth sound design are the many new and different worlds that are created with sound. I love classic synth sounds but I tend to lean more to creating brand new experiences, exploring sonic color palettes and transformations. I would say that this release is somewhere in the middle. I also wanted it to be a continuation of Metaphysical Fabrications, but while playing to the strengths of Absynth. Game audio definitely had an influence as well. Instead of creating interactive audio for video games, I'm creating interactive audio for synthesizers. Particularly when it came to working with Absynth's envelopes vs creating curves in an audio authoring tool to react to game variables. It's interesting how a lot of that stuff overlaps.” 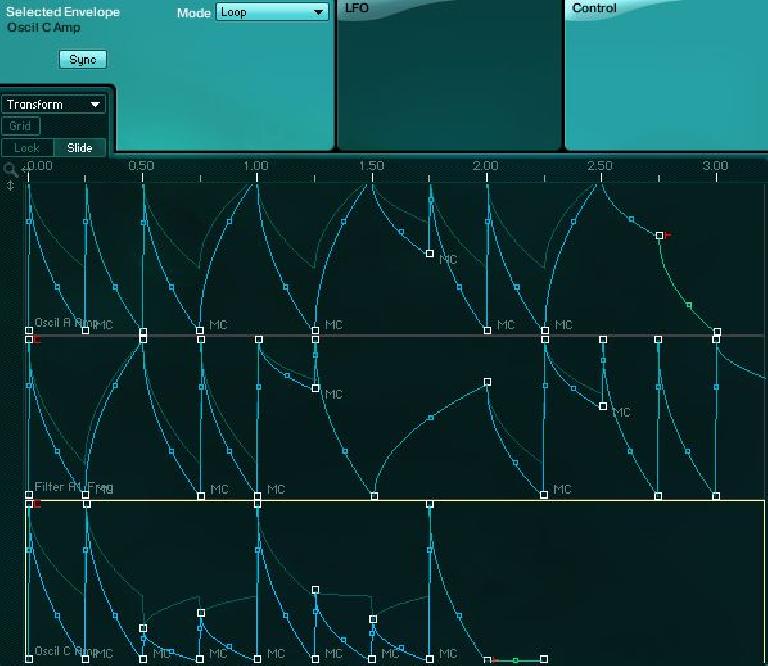 The Performance Macro parameters have been meticulously laid out to provide consistency and programed in ways that allow users to effortlessly transform sounds in interactive and forward-thinking ways.

Take for instance the second column of performance sliders, Rhythm. Every patch has some kind of rhythmic aspect incorporated into the macro controls. Some rhythms are created using LFOs and others created by modulating envelope breakpoints. 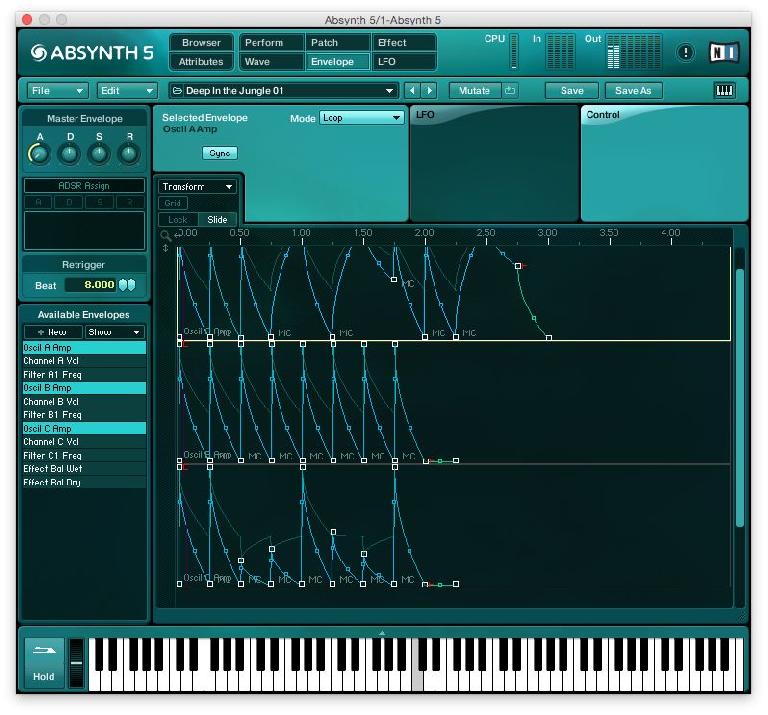 Here's a short video example of a morphing pulsing bass patch that demonstrates the amount of variation you can get with rhythmic aspects, among other things. 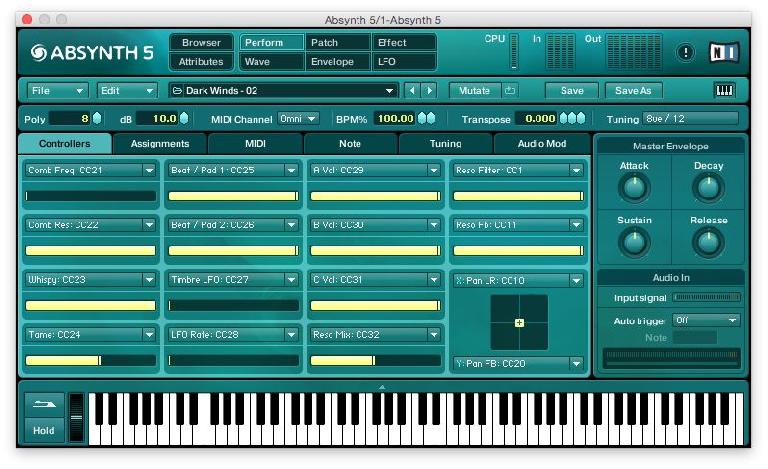 Kjeldsen remarks, “I wanted the user to be able to explore the patch and spark the user's own creativity via the macro controls. The macro patches demonstrate the various degrees of playability and sound design, and show what's possible. My intention is for each patch to be its own instrument to explore versus being a single preset that you load and what you play is what you get.”

To better illustrate, check out two short video examples exploring the macro controls of a pad and soundscape patch.

Macro Patches are additional presets that were created by manipulating and storing the macro control settings of the performance controller tab. Each of the 52 sounds come with a variety of Macro Patches that are quick starting points for dialing in variations of the main patches. There are 494 in total.

“One of the useful things about these Macro Patches is that they give you a quick look at what is possible with the macro controls of a single patch. Also, they provide immediate variation and control without having to dig deep in the patch. In the file browser, you’ll notice that there is a folder structure that mirrors the sounds in that folder. The macro patches are stored in the subfolders of each category folder, with the same name as the corresponding parent patches.” 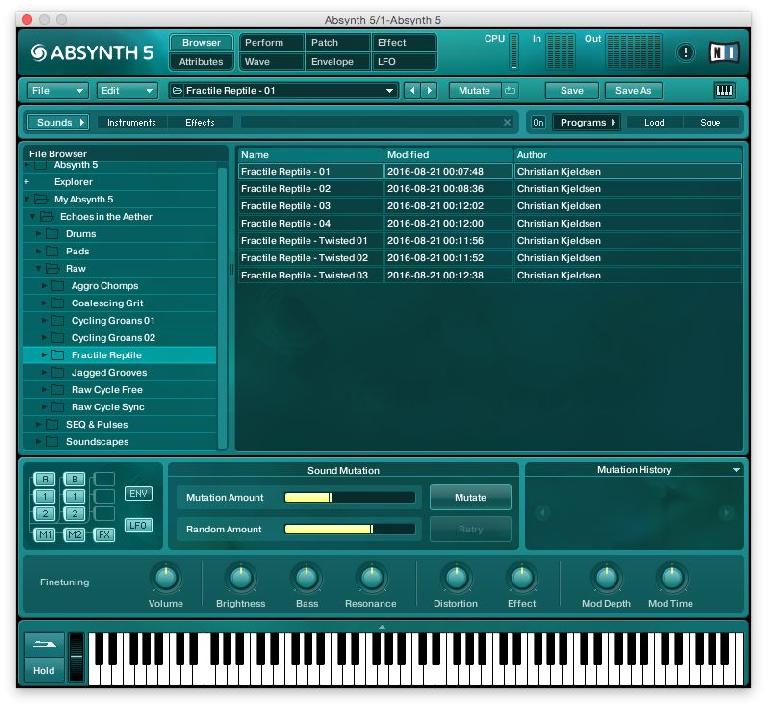 In addition to the airy, soft and serene pads and soundscapes, Echoes in the Aether contains some searingly edgy raw synth leads, powerful sequences and heavily processed drums. With a generous amount of waveshaping employed, modulating filter feedback via the performance macros jumpstarts the patch and kicks it screaming to life.

How aggressive are these patches capable of becoming? Let’s put it this way, the ReadMe documentation includes a warning disclaimer!

Res Scream only works when there is sufficient Resonance (CC2). There are safety checks via the envelopes of the B1 filter that tames aspects of the filter. This ensures that the user can tweak the module safely and freely via the macro controls. Altering these envelopes or other aspects of this module without care or understanding may result in extreme frequencies that may cause damage to your hearing or gear.

Why Absynth and not Reaktor?

When asked why he chose Absynth as a medium for his sound creation, Christian replied, “Absynth has a really nice sound and personality that I really enjoy. I like synths that get me thinking in different ways and Absynth is certainly one of them. Absynth and Reaktor are different animals that get my creativity sparked in different ways. While I'll still be doing stuff for Reaktor in the future, it was nice having a change of pace and hanging out with Absynth. Like Reaktor, Absynth was another synthesizer that I did sound design for in the early days of my sound design career, which at that time was Absynth 3. After doing Metaphysical Fabrications, it made sense to look to Absynth and continue the revisitation of the beginning of my sound design career.”

Even if you’re an experienced sound designer prone to steer away from presets, there’s a lot to be learned from backwards engineering these patches. The layout and organization is inspiring let alone the quality, flexibility, functionality and expressiveness of the sounds and modulation schemes. I’m looking forward to more genius in future releases from contortDistort but for the mean time remain content knowing that I’ve got heaps more to explore with Echoes in the Aether.

Pros: Nice selection of patches. Playable and useful in a variety of genres. Performance controls allow for a wide amount of variation and exploration. Includes additional Marco Patches for quickly exploring additional possibilities.