Language
Future Audio Workshop's original Circle synth introduced a fresh take on synth sounds and a futuristic interface. Noah Pred finds out how version 2 is an improvement, both for sound and usability.

In just a few short years, Future Audio Workshop's relatively small Berlin operation has vaulted itself to the forefront of music technology. Developing real-time audio recognition systems to help nightclubs remunerate composers while building innovative mobile apps, FAW's maverick approach has set them apart from the growing horde of virtual instrument companies. That said, it's their flagship virtual synth, Circle, which has arguably brought them the most acclaim. Boasting a dedicated user base that includes some of the biggest underground producers working today, Circle's combination of a sleek yet intuitive GUI with the highest possible sonic fidelity has paid dividends. It's no wonder electronic producers everywhere have been anxiously awaiting their revamped update, Circle². 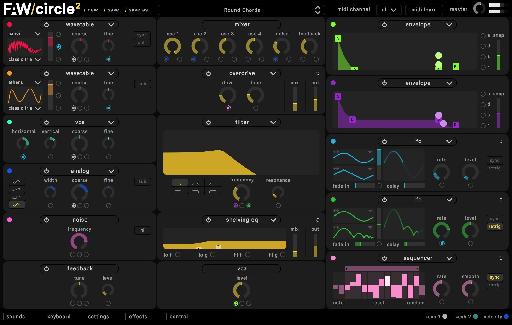 Deep in the Circle²

Time Is A Flat Circle²

Eschewing the skeuomorphic aesthetic that dominates much of the virtual instrument market, Circle already set itself apart from the crowd with its attractive flat interface. Updated with input from designer Lars Hammerschmidt, Circle² brings cutting-edge design language and retina-ready resolution with a timeless feel. The result is a creative tool that's incredibly intuitive for anyone with a fundamental understanding of synthesis '" without any of the visual clutter that can obscure key features in less considered designs.

While Circle² is available in standalone mode, it also loads as a VST, AAX, or AU plug-in in your DAW of choice. The top panel of the interface provides easy access to patch navigation, loading, and saving, along with MIDI learn and channel settings, and master output volume control with metering. The central panel is where the synthesis takes place via an array of modules organized in three columns: sources down the left, modifiers down the middle, and modulators down the right. Along the bottom, we have access to an additional pop-up panel that allows access to a more in-depth patch browser, keyboard modulation and a basic arpeggiator, global voice settings including detune, host sync and randomization controls, plus up to three master effect units, and finally, MIDI CC assignments.

Circle²'s foundation is its impressively programmed selection of sound sources. In the four leftmost modules of Circle², you'll find four oscillators, a dedicated noise module, and a feedback unit. Each of the four oscillators are easily toggled off and on, with three basic oscillator types to choose from: analog, wavetable, and VPS.

The analog oscillator offers four deliciously juicy core shapes: sine, saw, square, and triangle. The square and triangle both offer pulse width, while two of the four oscillators include a hard-sync toggle; sub mode converts the selected oscillator to low-frequency mode for use as a modulation source. They all sound impressively rich, yet remarkably clean throughout the full frequency spectrum.

Wavetable oscillators allow you to morph between two of the 109 selectable wave shapes; after the first 18 geometric waves, the more exotic shapes are named according to cities. Merely combining two waveshapes allows for sumptuous harmonic tonality, while the ability to morph between shapes can be automated or modulated by up to three sources. Hard sync and sub toggles round out the possibilities of the versatile wavetable oscillator. Better yet, you can download the free Circle Wavetable Generator to convert your own custom waveforms for use as additional wave shapes in Circle².

Advertised as one of the primary enhancements of Circle², the newly added VPS oscillator '"  short for Vector Phaseshaping Synthesis '" is based on groundbreaking digital research from the Aalto University School of Electrical Engineering and The National University of Ireland, developed for its use in Circle² in collaboration with Future Audio Workshop. A deceptively simple approach overlaps a pair of sine waves in two dimensions, resulting in a wide range of expressive tones accessed by adjusting the horizontal and vertical intersections of the waves. Both dimensions can be automated and modulated, allowing for dynamic timbres ranging from edgy and raw to smooth and deep '" made available for the very first time here in Circle².

The noise module offers low or high frequency noise types, with a frequency dial available for control from up to three modulation sources. The feedback module receives a tuned delay line from just before the master output, tunable in semitones and blent in with the output signal to add raw depth and unique character '" at your own risk, of course.

The central column of Circle² contains the modifier modules that alter the source signal output. Up top is the mixer, which attenuates the output level of each of the four oscillators, noise, and feedback. Next is the first of two insert effect modules, offering a range of options to add filth and character, including a multi-vowel formant filter, fuzz distortion, overdrive, parametric and shelving eq, static phaser notch filter, crusher, and ring modulator.

Below the first insert effect module is the filter. Six filter types are divided into 2- and 4-pole versions of low-, band-, and high-pass. Based on the classic Pro-One filter with a number of digital enhancements, I was impressed with how the signal retained integrity without distorting even at the highest resonance settings, ensuring a clean and pure tone without any degradation '" unless you add it in by design via the distortion-based insert or master effects. A dual filter mode doubles the filtration options in either a serial or parallel configuration.

Below the filter is another insert effect module with the same eight types as the one above, followed by a VCA output, which is where the volume envelope will be assigned along with two other available modulation inputs.

The right side column of Circle² is dedicated to five modulation modules, each of which can be set to either an ADSR envelope, an LFO, or a sequencer. The attack, decay, sustain, and release of an envelope can each receive their own modulation input, while the snap slider determines the curvature of the envelope's slopes. The sync-able LFO combines two of up 16 oscillator shapes in an adjustable blend for unique oscillation patterns, with fade-in and delay times, rate and level controls, and a re-trigger mode toggle. The sequencer is also able to optionally re-trigger and sync to host BPM, while a looping segment can be selected from the 16 adjustable steps '" which can be edited in free-ranging parameter control mode, or in semitones to sequence the notes of one or more oscillators. Rate can be adjusted, the step value transitions can be smoothed, and best of all, the step values can be randomized for easy creation of dynamic modulation patterns.

Assigning modulation is easy: just drag the colored dot in the upper left corner of your desired modulation source to one of the small grey modulation input dials of an available parameter; the input dial will now assume the corresponding color with the dial at the maximum modulation value, turned fully right. To adjust the modulation amount, click the input dial and a slider appears to the right of the pointer; to remove modulation, simply click the colored dot at the center of the input dial, drag away, and release. While it makes some sense given the instrument's architecture, I was nevertheless disappointed to discover modulation amounts are not available for MIDI control or automation. As someone who often prefers to adjust, for example, filter envelope amount rather than cutoff frequency, this was practically the only significant letdown I managed to find.

Rounding out the full complement of sound design tools are the three master effect modules. Each module can be chosen from panner, reverb, echo, double echo, ping pong echo, phaser, and chorus, while the all-new bucket delay and tube distortion units add vintage feel and grit. Better yet, all the effect parameters are available for modulation, fully integrating the effects within the sound design capabilities of the instrument '" as opposed to simply slapping them on at the end of the signal path as a mere afterthought. To make things even more convenient, master effect, insert effect, LFO, and sequencer modules can each be stored with their own snapshots independent of full patch memory for easy recall as building blocks in future patch construction. As a final bonus for OS X users, Circle² even provides the option of dedicated OSC control settings.

Despite how high FAW had already set the bar for themselves with the first version of Circle, it's hard not to be impressed with the enhancements on offer in Circle². Whether building patches from scratch, modifying the growing library of factory presets, or using the handy randomization controls to chance it, Circle² painlessly delivers high-quality sounds with style. Their commitment to elegant design in service of a fluid user experience make Circle² a joy to use, while the astonishingly flawless, full-bodied sound quality makes the majority of plug-ins pale in comparison. It's no surprise their team boasts leading mathematicians working alongside innovative designers and clever programmers '" the result of their collaboration is an essential piece of virtual kit.