This sampled brass instrument runs in the free Kontakt Player and brings the sound and feel of a lush horn section to your tracks. Jay Asher put it to the test.

When Cinematic Studio Strings was released, I found that much to my surprise, it became perhaps my favorite sampled strings library, just when I thought I didn’t need another strings library. Well, they did it again, and it certainly will take its place among my “go to” brass libraries.

Cinematic Studio Brass is a Kontakt Player library, so a full version of Kontakt is not required. Like Cinematic Studio Strings, it was recorded on the Trackdown scoring stage in Sydney, and even without reverb, the sound is lovely. These guys just know how to get a great sound and as I am famously (or infamously) a “tone is king” guy, this one hits the mark. (There is an included hall style reverb.)

They have included: solo French horn, C trumpet, tenor trombone, bass trombone, tuba, 4 French horns, 2 C trumpets, and two trombones, as well as a full ensemble patch for sketching or composing with if you like.

As with their Cinematic Studio Strings and Cinematic Studio Solo Strings they are not giving you every articulation you have ever seen or heard in a concert hall piece, but all the bread and butter ones are there. Most instruments give you sustain, sustain with legato, several versions of marcato, four short articulations, rips, flutters, mutes, trills, and double tongues. 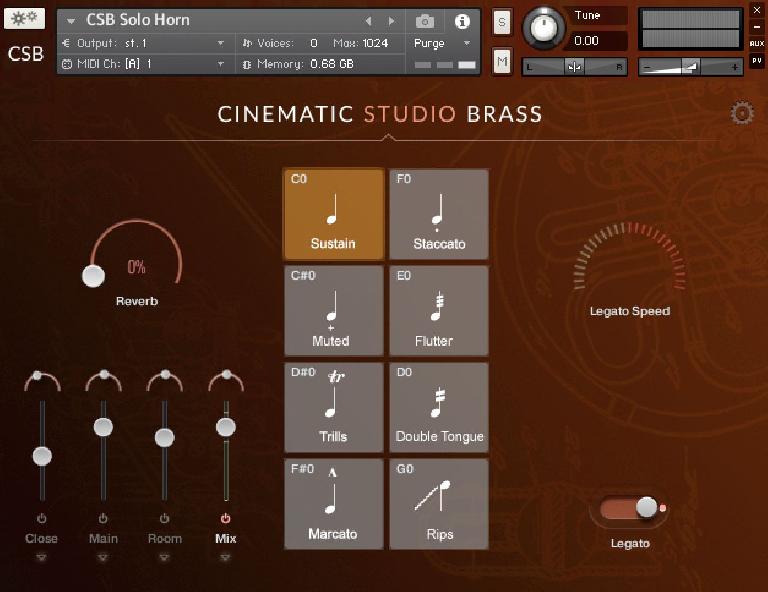 There are variations. Trombones do not have trills, because a slide trombone does not do them very elegantly.  (Man I wish developers would include euphonium.) Tuba does have trills but not mutes or double tongues. I don’t know how often having a muted tuba matters to you, but if you need it, you will have to look elsewhere. 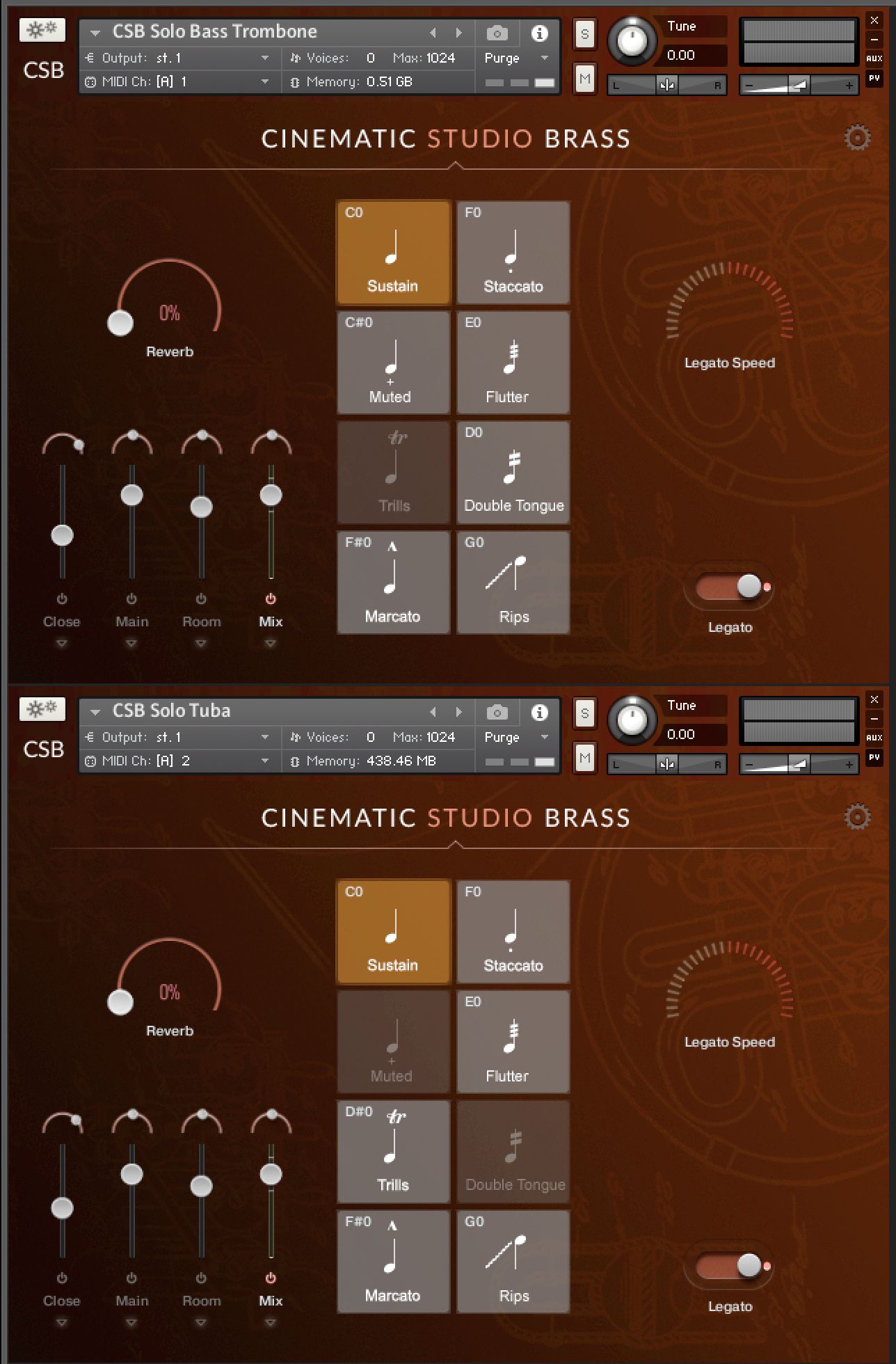 There is an adjustment to be made with playing some of these instruments. The legatos are among the best on the market but they take some getting used to and compensating for as they have a fair amount of latency. The legato with sustain and marcato articulations work with two velocity zones, medium and fast. Medium has the most delay, 180-230 ms depending on the instrument, while fast is more like 100 ms. Holding the sustain pedal while playing a note twice actually produces a re-tonguing of the note using round robins.

Sustains were sampled with four dynamic layers modulated via a mod wheel crossfade and switching between them sounds like the real thing. It is controlled by CC1 therefore CC 11 is the default for volume.

Disabling the legato switch on sustains and marcatos allows you to play chords and enables an attack and release control panel. I have mixed feelings about this. Certainly it aids users in writing divisi but I have yet to see a brass player play a chord and purist that I am, I don’t think sampled solo instruments should do this. But I am guessing that more users will disagree with me than agree.

Trills are accomplished by pressing two keys at within 25 milliseconds of each other. For a half step, two notes a half step apart and for a whole step, a whole step apart, with or without legato.

The double tongues accommodate anywhere from 1 to 9 discrete repetitions, controlled by the mod wheel. There is also a “hold” setting, selected by pushing the mod wheel all the way up, that produces repetitions as long as you hold down the note. You can set a tempo or sync to your project’s tempo. 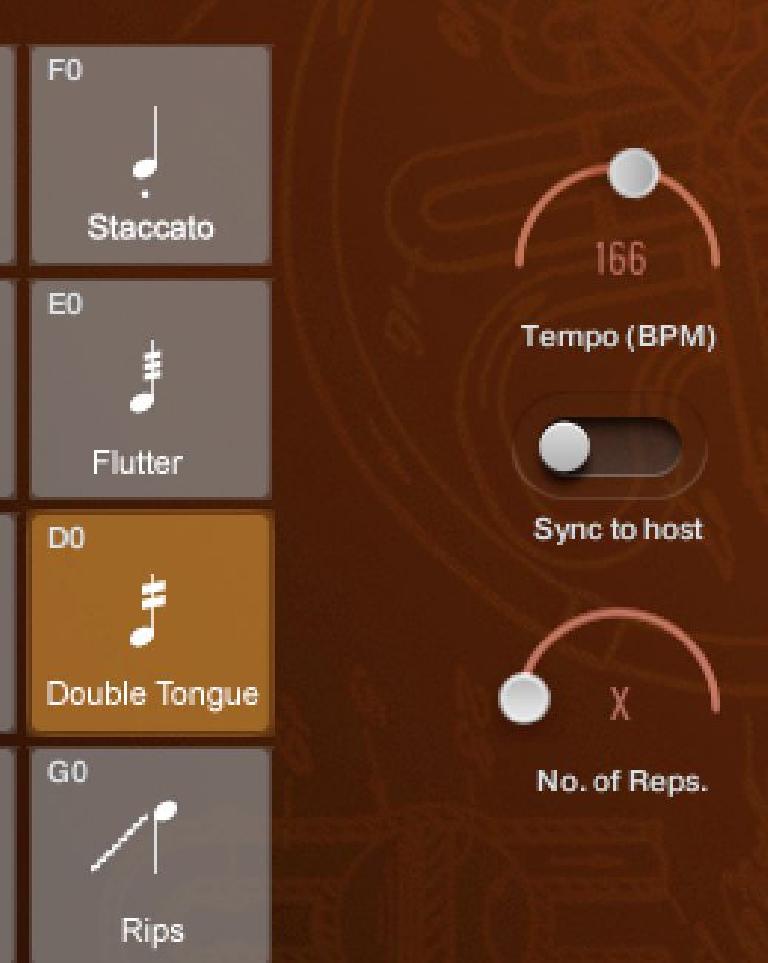 Vibrato is baked in and most instruments have little to none. I like to control vibrato from a mod wheel or other MIDI CC, so for me this is the biggest drawback of CSB. I wish the pedal tones were available on the bass trombone that some libraries include, but the developers felt that since they cannot be captured with legato, it would have limited usage and be confusing for users.
As with CSS, there are a number of key switches that are velocity sensitive. (For some reason I failed to discuss this in my CSS review.)

Just to mention a couple, playing the key switch for legato at a velocity of -64 you get a sustain with no legato, while 65 or higher gives you the legato. Playing the key switch for staccato at a low velocity gives you repetitions and as you strike the key. switch note harder and harder you get staccatissimo, then staccato, and finally sforzando.  You can also go between them with the modwheel, but it is a little tricky to be precise and on the non-velocity articulations CC1 controls velocity crossfade, so there is room for confusion. CC 58 can also be used however.

If you don’t like key switches, you can use a MIDI CC, the default is 58, to change articulations, in accordance with the numbers in the manual. 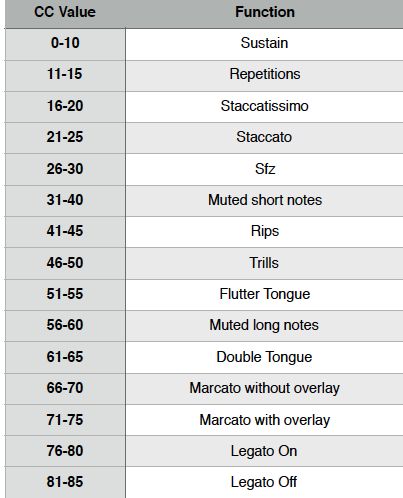 My recommendation is to use an articulation switcher that allows you to avoid all of that.

Clicking on the gear icon opens the Config Screen. 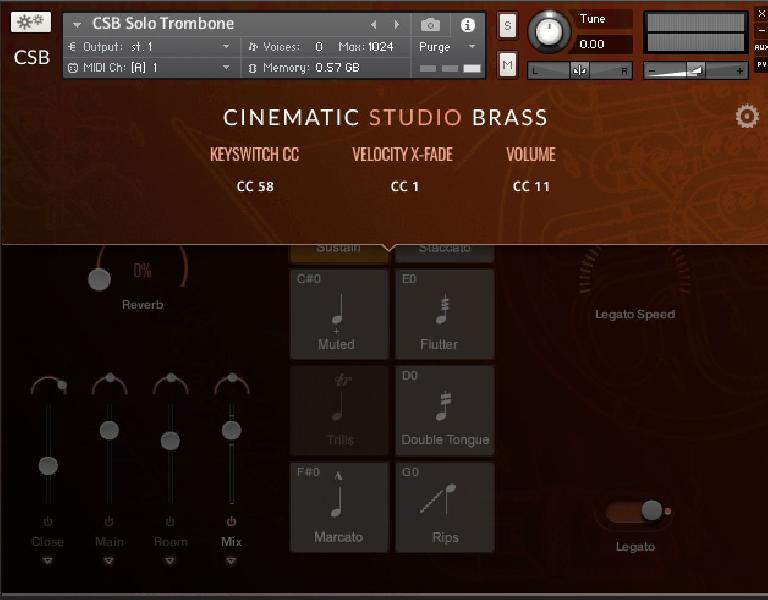 Here is where you can change the default settings for the Key switch CC, velocity crossfade CC and volume CC.

This is a great sounding brass library that I really like and if you like Cinematic Studio Strings, I bet you will too.

Price: $399 US. Discounts available for those who bundle with or own other Cinematic Studio Series libraries.

Pros: Beautifully recorded with a great range of dynamics, does not necessarily even need reverb yet still is not as “washy” as some competitors’ offerings. Very playable, although the legato takes some practice. Works with the Kontakt player so a full version of Kontakt 5 is not required. Not that CPU demanding.

Cons: No user control over vibrato.  The velocity sensitive key switch feature is tricky to control precisely without an articulation switcher.