Carver is an intuitive and easy to use plug-in that gives you detailed control over the transients of your audio. Noah Pred finds out if this could help your sounds pop out in the mix.

If you need to make stale drums pop, or tame unwanted slap at the start of a sound without risking over-compression, transient shaping has become a first line of defence in recent years. But not all transient shapers are created equal. While it’s common to have simple gain control for the onset and tail portions of incoming audio, it’s rare to have more options than that.

First, let’s review for those who may be asking: what’s a transient? Essentially, transients are the loudest bits of audio that jump out at the beginning of new notes or hits – when a drum is first struck or a bass string first slapped. These tend to be visible in a waveform as steep, sudden jumps from the -Inf dB zero-crossing to somewhere approaching the 0 dB maximum. These onsets can be adjusted with Carver’s Attack settings, while the remainder of each sound as it trails out is controlled by the Sustain settings. 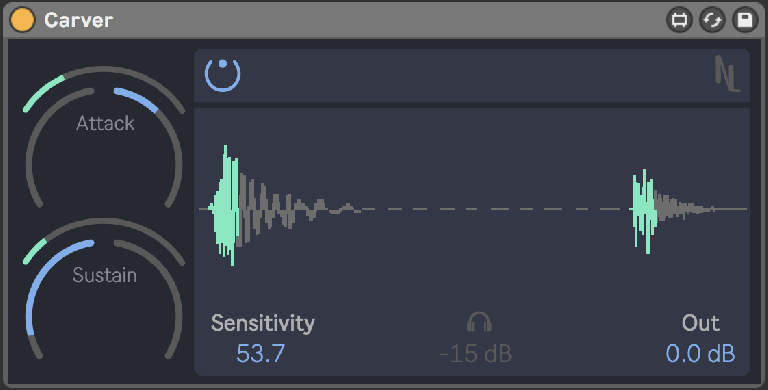 PIC 1: Carver in action with transients boosted and sustain diminished, with a moderate degree of sensitivity.

Both the Attack and the Sustain can be drastically exaggerated or reduced to near-oblivion. What makes Carver particularly unique in doing so is that both phases have their own time control. The Attack Length setting has a color-coded display in the oscilloscope, handily showing in real-time the segments of audio signal being treated with the Attack knob.

The Sustain Length control seems to work in the opposite fashion, with lower Sustain Lengths inflating longer tail segments while higher Sustain Lengths seem to affect less of the tail. Of course the result of the Sustain value is reflected in the gain of the waveform displayed in the oscilloscope, but without the color-coding offered with the Attack Length, it’s somewhat less clear exactly which section is being inflated or deflated by the Sustain control.

While these controls are available for automation, it’s likely you’ll want to leave them locked in once you’ve got them dialed appropriately for the material you’re working with. However, the Sensitivity setting affords compelling control over the incoming signal. At 100, Sensitivity captures and processes even the quietest transients of incoming signal – on a drum beat, this might include high-hats or tambourines, for example.

What’s unique about Sensitivity is that it doesn’t dictate which transients are selected for processing: at lower values, it eliminates quieter transients from the audio output completely – which means it could be creatively automated to switch between a full rhythm being played at a high value, and then, going down to 20 or less, only the loudest hits, such as kicks and snares, would come through. Sensitivity doesn’t function like a typical Gate processor where the loudest peaks of transients above a threshold would still come through: to the contrary, it removes transient impacts along with their contingent tail entirely. This is all done with very smooth envelope controls making the end result impressively clean. While the timing-controlled Attack and Sustain settings provide detailed manipulation, it’s the Sensitivity control that elevates Carver from a highly-useful mix utility to a potent creative tool. It is possible to add significant gain to the outgoing signal, but an Out gain control is there compensate. 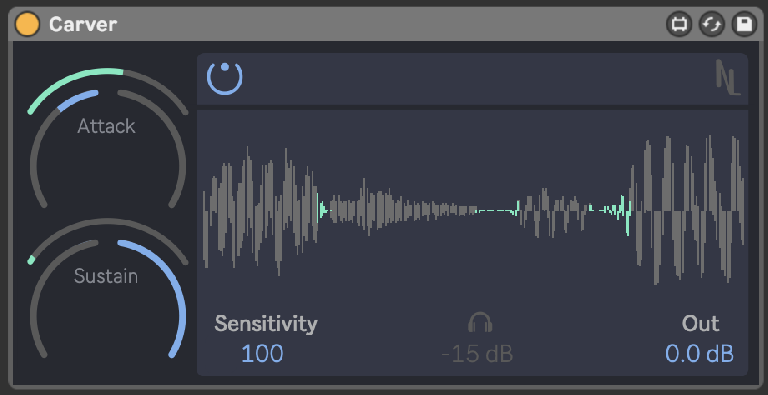 Overall, Carver is an impressively accurate audio effect, especially where Attack Length adjustments are concerned. The interface is elegant and straightforward to use, while the real-time waveform display helps guide toward desired results. Combined with its impressive Sensitivity control, Carver could easily become not only your go-to transient control device, but also a dynamic creative tool in its own right.

Cons: Length controls a bit fiddly to manipulate via mouse.