Language
If anyone can take high-quality, organically sampled world instruments and give them a cutting-edge breathe of new sonic life, it's Sample Logic. Lynda Arnold explores Bohemian and is impressed.

Sample Logic's new sample instrument library, Bohemian, is a collection of over 800 exotic, traditional and morphed instruments and multis. They describe this unique offering as cinematic street and new world instruments ranging from Hang or Handpan Drums, to Harmonic Tube, to Didgeridoo to various Wind, Bell and Mallet type instruments. Recorded at the incomparable Skywalker Sound and performed by multi-instrumentalist Laura Inserra, Bohemian is a library full of wonderfully recorded instruments infused with brilliant synth and patch sound design by the folks at Sample Logic.

At first glance, the interface and setup are very similar to their recent release, Cinematic Keys, which I reviewed in 2014. There are over 800 patches designed for this instrument totaling nearly 9 GB of original, immediately accessible content. The instrument patches are divided into Atmospheres, Percussive and Instrumentals with many sub categories. The Multis section contains separate patch folders for Construction Beds, Instrument Stacks and the all-encompassing One Note Glory. On their website, you'll be very entertained by the one and only Jordan Rudess playing through some of his favorite Multi patches. The Multi patches provide loads of inspiration for live players. I think users will appreciate the consistency in Sample Logic's instrument design and find getting around the instrument enjoyable and productive. I couldn't wait to jump in and hear some of the source material that serves as a base for the hundreds of sound designed patches.

Digging Into the Source Material 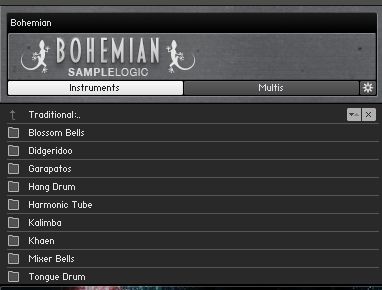 I first played through some of the traditional instrument patches where I found some of the dryer, source material. I've been way into Hang (or Handpan) drums of late, and even wrote an article about the making of them for AskAudio, so I was looking forward to playing around with them in Bohemian. A few Hangs were sampled each with a different timbre. Usually, Hang Drums are in a specific key and here they are mapped chromatically. I absolutely fell in love with the Handpan Rolls patch and would consider using it as is or through a variety of creatively applied effects. The Harmonic Tube is a textural instrument that could work in many visual media contexts to add surprise and tension to scores. The samples resemble wild animal calls. Each is unique and has lots of sound design potential. The Didgeridoo patches are also fantastic and have a lot of variety from short to sustain sounds to taps and detailed samples of different inflections. The low end of the Didgeridoo is great, and I can see these patches being used as a drum, bass or drone interchangeably. I never heard of a Khaen before Bohemian so I didn't really know what I was listening to until I found a few YouTube videos of people playing it. The Khaen is a free reed bamboo mouth organ originally from Northern Thailand and Laos. The videos are worth watching to get an idea of how this fascinating instrument is played. Some of the most interesting synth patches are made from acoustic source material and Bohemian scores big with a wide range of harmonically rich textures.

One of the best ways to get to know the extensive effects and step animator sections is to spend some time going through patches in the various categories. When I first used the Step Animator in Cinematic Keys, I studied and played around with some of the arpeggiated and sequenced patches to get to know the interface. Many of these patches can be used right out of the box, but little tweaks here and there can help to make the sound your own. 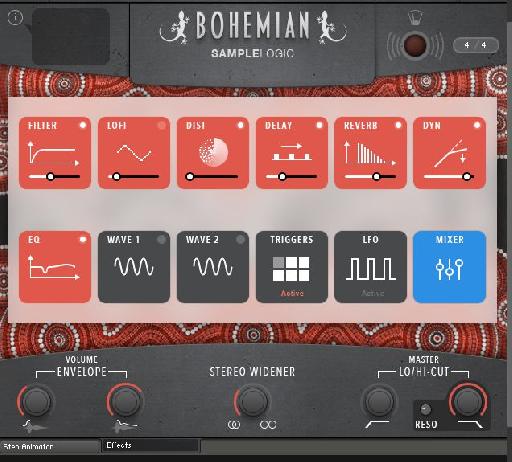 The effects section has a variety of parameters including Filter, Lofi, Distortion, Delay, Reverb, Compressor, EQ, Two Wave Generators, LFOs, Triggers and Mixer. Compared to Cinematic Keys, there are two Waveform generators instead of one and many more custom Waveforms included to weave into the source sound. There are seemingly endless combinations of these synth generators with the source material (hence all the hundreds of patches included!). The mix of the 2 Wave sections and the Main sound is done in the Mixer section. Most effects also come with an FX Animator to step sequence the effect's volume or pan or other parameter. If the FX Animators aren't enough, don't worry. The Step Animator provides even more fun! 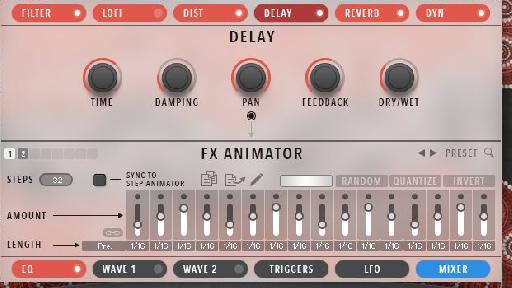 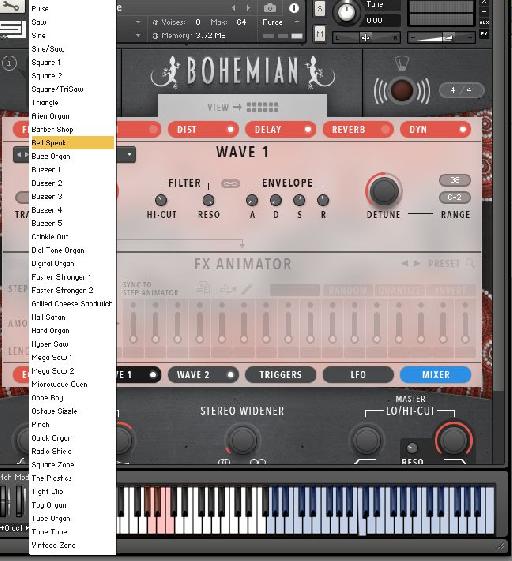 The Step Animator was first introduced by Sample Logic in Arpology, a sample instrument dedicated entirely to arpeggiated and sequenced instruments. The Step Animator is a step sequencer and arpeggiator build into one interface featuring a wide range of parameters including multiple step types, velocity settings, step length, Arp direction, transposition, note duration, stutter rate and pan. What's great is all the parameters can be adjusted by individual step, giving you detailed control over the loop. The loop can be synced to the project tempo and there is also a MIDI drag and drop option for laying out the rhythms in your DAW. Some of the global settings include speed adjustment, playmode and swing. 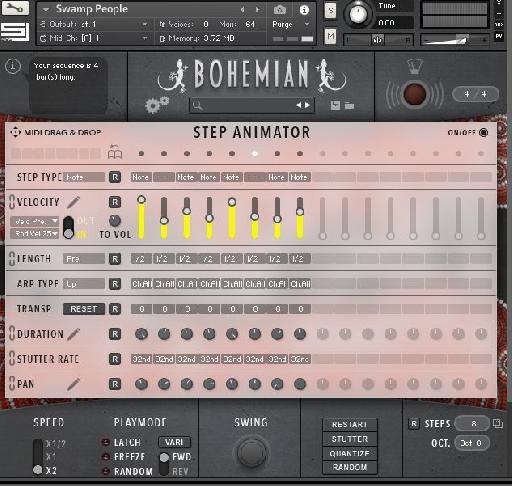 Figure 5 '" The Step Animator in Bohemian

I found a little bit of tweaking goes a long way to creating something magical with the Step Animator. The main Step Types are fun to play around with and include Note, Stutter, Glide, Freeplay Mode for added randomness and Stutter Alternating. It's easy to get carried away adjusting all the parameters (which is also a good thing in some contexts), but you'll want to keep in mind how the sounds are integrating in the large context of your composition. Especially when creating a loop to fit a certain number of measures.

Sample Logic shines in their ability to provide morphing capabilities between high-quality recorded organic sounds and cutting edge digital manipulation tools. Their all-in-one approach to sound and music design inside the Kontakt interface is gift to composers and sound designers where time and resource management is a key component of the production process.

Sample Logic has succeeded with expanding on these traditional instruments far beyond their original state, creating a whole new world of sonic possibilities.