Language
If you'd like a studio condenser microphone with a raft of interchangeable capsules for a multitude of possible sounds when recording, then Blue Mic's Bottle Rocket Mic Locker might be for you.

Every time a package shows up at my studio door from Blue Microphones I get a little giddy. I’m a big fan of the ‘Blue Sound’, and I will be totally honest and admit I really dig their aesthetic too. Something about the retro look and the ‘bigness’ of some of their mics can often elicit some real inspiration from a vocalist or instrumentalist. With the Bottle Rocket Mic Locker, Blue is offering a concept which is pretty innovative. A solid studio condenser microphone with a fleet of interchangeable capsules that allows you to tailor your sound without re-micing the source. I was very curious to see if the BRML (my new abbreviation for the Bottle Rocket Mic Locker) could live up to the hype. 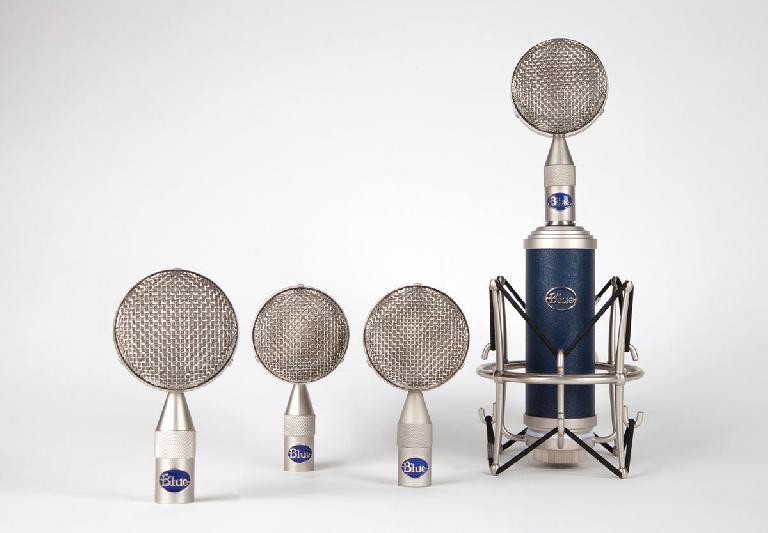 With the BRML, you get the Bottle Rocket ‘Stage One’ microphone, 4 interchangeable capsules, a lovely shock mount, and a pretty sweet hardshell customized case to store/transport your new mic ‘system’. Each of these capsules is tuned to give a different response, and you’re getting 4 capsules out of a total of 9 possible choices. The 4 that come with the BRML are selected conveniently to give you a really nice spread of frequency response. Should you decide you love this mic and system, you can easily attach any of the ‘bottle caps’ from the series onto your included Stage One mic and truly customize your main recording channel to suit the source.

While the specs of the BRML interested me for sure, I was truly intrigued to find out how much diversity you could actually get with this system. You can do a lot with a good EQ, and I was curious to see if changing these capsules would yield a better result than some simple editing in post production.

I recorded the same vocal spoken phrase with each of the included capsules. For each take, I simply switched the capsule. The recording chain was the same, and I used no post processing. I utilized a small string attached to the base of the microphone to keep the distance from the mic uniform. Take a listen to the response of the 4 included capsules:

As you can hear, there is definitely quite a noticeable difference in response from each mic capsule. I was truly impressed by the sonic possibilities of the BRML, and already started jotting down what situations I might use each capsule for. The B0 is billed as a cardioid large diaphragm for the ‘ultimate big vocal sound’ and I think it definitely delivered on that mark. I was a fan of the detail and dynamic range it captured for sure.

The B6 is also a large diaphragm but with a dual backplate design. This allows it to give a bit more ‘presence’, something I think you can hear right away. I could definitely see myself switching to this capsule for spoken word intelligibility or for a lead vocalist whose voice wasn’t cutting through the mix as much as I’d like.

The B7 is a single backplate large diaphragm that is billed as a ‘classic vocal sound’ capsule. I found that it was a bit more restrained on the high end, and had the more detailed mid frequencies it promised. I would be happy to use that when working with a vocalist whose voice already had a lot of presence and was standing out a bit too much in the mix.

Finally, the B8 is considered the ‘versatile’ capsule of the bunch. I actually found it very ‘wide’, and the clips I recorded with it had a very big sound. I was particularly happy with how large my acoustic guitar sounded with it.

The Bottle Rocket Mic Locker is an incredible buy at the price. I would likely have been perfectly happy paying the street price for just the B8 and the Stage 1 microphone. Throw in the fact that you get 4 swappable capsules, a sturdy shock mount, and an extremely high-quality case into the mix and you can’t beat it. A big win for Blue, and for anyone that gets a BRML into their recording chain!

Cons : Not really a con, but I’d love it if they offered an ‘ultimate edition’ with all of their available capsules. After trying the 4 it came with, I’m addicted…