This playable granular synth and beat looper for Reaktor inspired Noah Pred to create some excellent new sounds. Here's how he got on...

With analog hardware increasingly dominating the production market, software developers are forced to turn to increasingly specialized expressions of uniquely digital tools. So it’s no surprise that granular synthesis is in the midst of a renaissance, with all kinds of fresh takes pushing the sample-based technique in exciting new directions.

Reaktor-based innovators Blink Sonic have brought their clever approach and distinctive interface design to their own unique take on granular with Cataliz. Beyond the standard grain slicing and redistribution that defines the glitchy, dispersive sound of granular work, Cataliz is optimized for live performance via touch screen with a number of highly playable interface features. 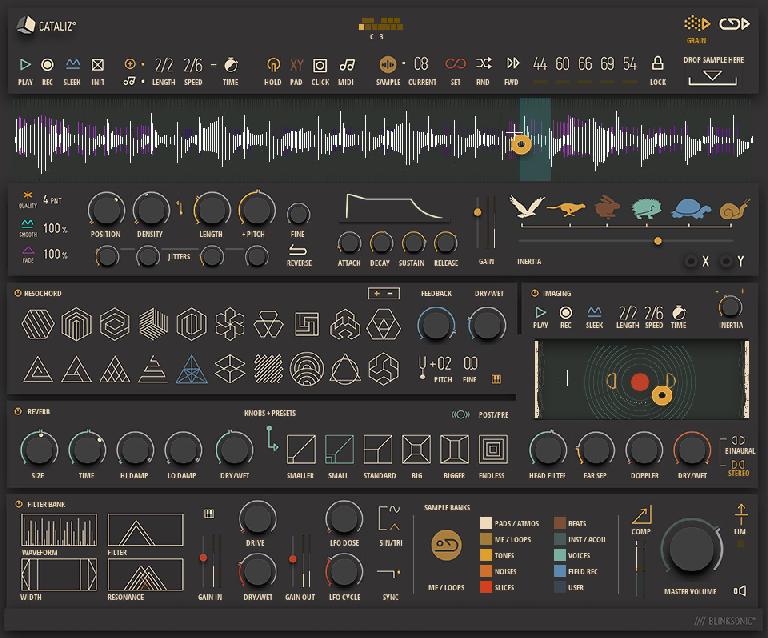 The most striking feature is the XY grain pad superimposed on the waveform display. You can drag a cursor along the X-axis to control the playback position, while the Y-axis can be assigned to either grain Density or Length. With a touch screen, it offers intuitive gestural expression well-suited to live performance.

XY pad movements can be recorded or looped in real-time to create motion-based textures that swirl and evolve as other parameters are changed. Relative grain start Position, Density, Length, and Pitch controls all have their own dials, each of which features a Jitter amount option for spread randomizations. Reverse grain playback, Fades, and Smooth interpolation options reduce grittiness as needed. An Inertia slider imposes smoothing to XY pad motions after recording to produce less angular changes, while Speed and Length controls can slow or speed up recorded movements.

An unusual Imaging section offers Binaural and Stereo modes, with control over Head Filter, Ear Separation, and Doppler – along with its own loop-recordable XY pad featuring the same Speed and Inertia controls and the main XY.

A powerful Resochord bank can impose 20 different tunings of 6 parallel delay lines, each tuned to express a different chord. Enabling this can impose lush harmonics on otherwise atonal material – perfect for turning weird rhythmic loops into extensive drones. Each chord is represented by a unique if inscrutable symbol, adding to the sense of playful experimentation catalyzed by this instrument. Base tuning, Feedback, Polarity, and Dry/Wet provide additional control over this powerful feature that really sets Cataliz apart from other granular synthesizers on the market.

Enhancing Cataliz’s ambient capabilities, a sumptuous Reverb section provides all the standard controls, along with an Endless option for never-ending sonic stories. The non-traditional Filter Bank is composed of a series of resonant band-pass filters with a Dry/Wet blend to boost harmonics. A Drive control adds bite, while a dedicated LFO adds further motion.

Nine sample banks totalling 1.9 GB are selectable, along with a User bank that can be populated as you see fit. Why bother setting that up when you can simply drag and drop your own samples in? Cataliz features a round-robin sort of sample player with up to five samples that can be triggered with each incoming MIDI note, either randomly or in a specific order; a Lock button keeps the last triggered sample in playback for added real-time control. 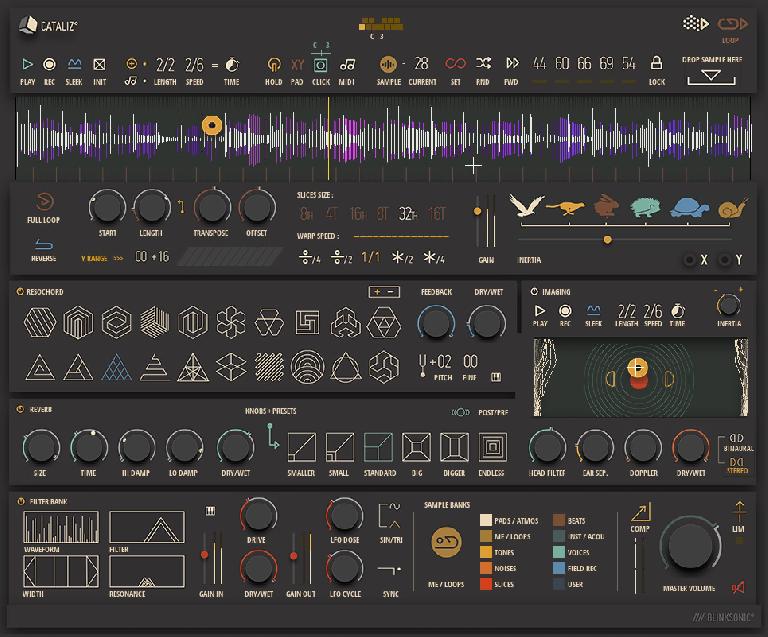 Alternatively, Cataliz can be played in Loop mode, where rather than chopping audio into minuscule grains, it divides a sample into host-synchronized loop segments that can be divided, multiplied, transposed, and re-ordered – extra fun for rhythmic components that are optimally chopped to 4 bars in length.

500 intricately programmed preset snapshots provide an ample glimpse of the powerful possibilities on offer, but I found Cataliz most exciting when using my own audio material to drive it. Perhaps my Macbook Pro is beginning to show its age, but Cataliz is CPU intensive enough that it was difficult to use inside a DAW without noticeable strain – but running it standalone and using Reaktor’s built-in recorder to quickly generate all kinds of raw material worked great; capturing Resochord changes and other momentary tweaks led to particularly compelling results.

Combined with touch-screen capabilities that can work with a laptop or hybrid PC equipped with a touchscreen, or an iPad with a Tiers application that can be used as a second display, you can easily take advantage of the XY pad and other parameters despite Reaktor not yet supporting multi-touch.

Cataliz doesn’t work with the free Reaktor Player, but for full Reaktor owners with relatively new machines and, ideally, touch screens, who are seeking new inspiration for sound design and live ambient drones, it's well worth the affordable price.