Language
Bitwig Studio is one of the new kids on the block in DAW terms but really impressed us when it first appeared. So when we got our hands on the brand new version 2, would it still blow us away?

Most new DAWs start off relatively feature-light and only really hit their stride three or four major versions in. Indeed, it’s a tough market in which to establish new products and ideas. When Bitwig Studio appeared in 2014, it surprised many people by seemingly skipping some of the early stages and going straight to being a very adept package for a first release. Some people noted its undoubted resemblance to Ableton Live (the company was started by ex-Ableton employees) but when you actually used it, you could see that despite some superficial similarities to Live, the developers’ claim that they had tried to assimilate the best parts of many different DAWs largely rang true.

So What Is It?

Before we get to what’s new in version 2, a brief recap of what Bitwig Studio is all about. Running on OS X, Windows and remarkably also Linux, it has the benefit of being a fairly new product and is thus unencumbered by years of legacy code. Ableton Live, believe it or not, is 16 years old. Cubase and Logic, even older. Not only does this mean the developers had time to learn a lot from competing products, it also makes it easier for them to adapt to newer technologies. As an example, in the Settings you can customise Bitwig for all kinds of monitor setups, including tablets like the Surface. Fullscreen operation is completely supported, as are Retina and Hi-DPI screens. These are things that older DAWs take time to incorporate since they require much rewriting of code. Being a younger product also usually means having fewer features. And while it’s true that Bitwig 1 didn’t have the insane depth of features of some of the bigger name DAWs, it’s also true that the developers were aiming to create something unique rather than shoehorning in everything they could. So are there still omissions? Yes, like no support for video, although that’s something that will surely arrive at some point. But it’s still a surprisingly adept and powerful DAW with a slick, modern interface and tons of functionality. Let’s have a look at what’s new.

Although the fundamental look of Bitwig Studio remains, there have been many tweaks and changes. The first thing you’ll bump into is the new Dashboard, a window from where you manage settings, projects, templates, packages and more. Downloads happen in-app which is much smoother than dumping you out to a web browser and overall the experience of Dashboard is very efficient and easy to get to grips with. 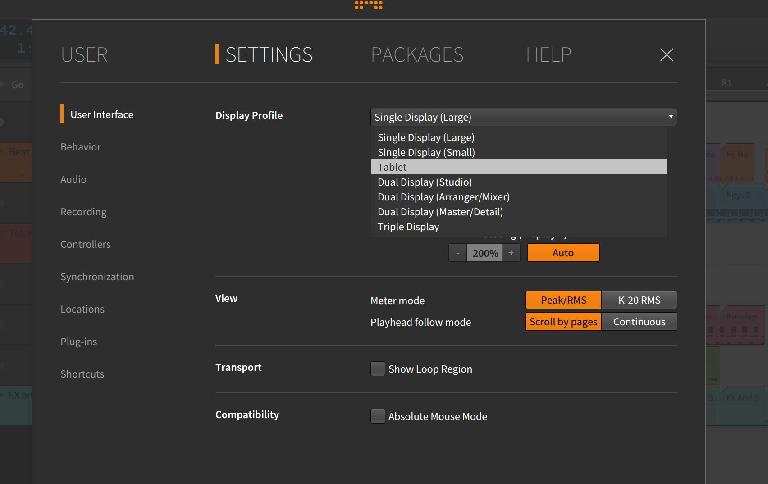 Graphically, everything feels cleaner and better organized. Menus have been reworked and are context-aware, with the ability to pin actions to menus for quick access. It’s probably one of the easiest DAWs to learn from scratch: the developers would seem to have paid a lot of attention to clarity, and the minimalist GUI actually helps a lot with this. Notifications (which can be muted) appear in a similar way to OS X or Windows, rather than pop ups in the middle of the screen – another nice touch.

The modulation system, which was already pretty cool, has been extensively reworked and takes things a big step closer to Bitwig having a fully modular device architecture. Each device both internal and external has modulation slots and you can add an unlimited number of modulators from the pop-up browser, made up of a pleasing and quirky collection of animated icons. You can assign modulators to any number of parameters, interconnect them and even use many in polyphonic mode which enables per-voice modulation. There are 24 new modulators, which you can read about here.

The new modulation system is a rabbit hole of possibilities and probably the most powerful I have ever seen in a DAW – the reason being that since it’s easy to use, you’re more likely to explore it.

Bitwig Studio comes with a bunch of effects and instruments and rather like Live, these exist in chains along the base of the window and have minimalist rather than skeuomorphic interfaces. Like all content they can be dragged in from the browser, which has multiple views, filters and icons to let you catalogue, list and find samples, projects and other data. The browser can be a little clinical in its use of Windows Explorer-like lists and trees, but on the other hand it doesn’t require lots of separate pop up menus and windows as some do.

The Browser with its many sections

Existing devices have been updated, with dynamic displays introduced for several of them, and every device now has a remote control panel for creating quick mappings for any device in a chain. Polysynth has been enhanced, and there are a bunch of brand new devices including a spectrum analyzer, phaser, pitch shifter and ring mod. On the MIDI side, new MIDI generators and effects are introduced including a chorder, note echo, harmonizer and other MIDI processing tools. There’s VST3 support with its attendant benefits, though still no AU support for Mac users. 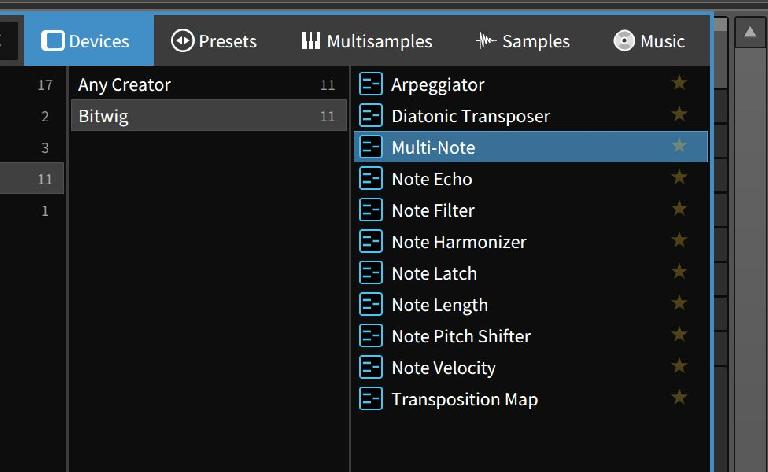 The developers have done a lot of work on improving the way Bitwig Studio communicates with external hardware and this is very welcome given the resurgence in popularity of hardware synths and other gear. There is a range of new devices for dealing with MIDI and CV in and out and connecting to hardware including devices for MIDI CC out, Program Change out, Hardware Clock out, note as CV/Gate out and CV signal out. Bitwig Studio 2 can now send MIDI timecode out too so all in all there’s a huge improvement in its capacity to act as the centre of your hardware studio as well as your software one.

Of the other improvements, Smart Tool Switching is very welcome, with the tool changing function based on where you click, and there’s also the ability to create fades and crossfades in the arranger timeline or audio editor and inside clips. This is arguably quite basic functionality for a serious DAW, but it’s here now, at least. Existing features carried over from V1 are still present of course, like sandboxing of VST plugins, the dual clip and timeline systems for performance and arrangement and much more. 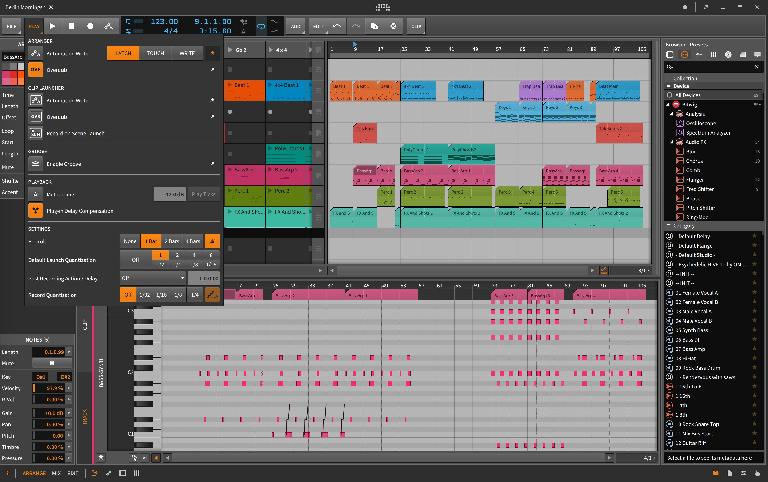 Many tools and options have been optimized in cleaned-up and easy to navigate new menus.

Bitwig Studio 2 is a very well designed and approachable DAW that manages to be friendly enough for new users but also has a very solid feature set and increasingly with version 2, seems to be moving towards being a much more well-rounded product. While it does lack some things (ReWire, video, AU support, scoring), in other regards it is ploughing its own furrow: the new modulation system is amazing, support for MIDI and CV in and out is massively expanded and workflow is modern, slick and efficient.

The work the developers have done on the interface and new devices really shines through. Price-wise it’s comparable with Live’s Standard edition, but has more instruments included. People will argue about the price but it’s undeniable that all the new stuff in version 2 makes it a more attractive proposition for new users and switchers alike. The upgrade price is possibly slightly steep, but there’s a demo available so anyone can check it out and make their own mind up. Having had a chance to work with Bitwig Studio 2, I highly recommend that you do.

Cons: Still some omissions: video support, AU for Mac, ReWire. Upgrade price from V1 could be a little lower.